An unidentified Vivo phone with model number 1951 has been spotted on Geekbench. The listing suggests that the phone will be equipped with a Qualcomm Snapdragon 710 chipset. It will house 6GB of RAM and will run on Android 9 Pie. The hardware configuration essentially makes the phone a mid-range device. The Vivo 1951 has scored 1907 and 5974 in Geekbench single-core and multi-core tests respectively. What’s interesting is that the phone may debut in India because it has been certified by the BIS agency.

Vivo 1951 is one of the phones that’ll make its way to India. Vivo is all set to launch the Z1 Pro mid-range phone in the country, and it has already started to tease the specs and features of the device. The phone will be powered by the Qualcomm Snapdragon 712 mobile platform. It will sport a 32MP selfie camera in the punch hole display. The phone will house a 5000mAh battery with 18W fast charging technology. 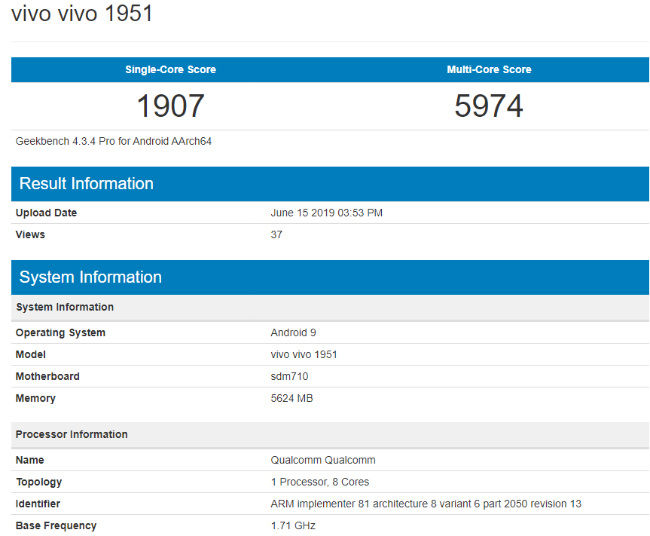 The Chinese tech giant has partnered with Flipkart to sell the phone in the country. According to Vivo, the Z1Pro has been designed keeping in mind the needs of the India’s Gen-Z smartphone consumers. The phone touts a long-lasting battery and will come with Vivo’s exclusive Fast Charging technology. In the camera department, the phone is said to sport an AI-powered selfie shooter with photo customisation solutions.

Vivo’s latest mid-range device is the Vivo Z5x that was launched at an event in China. The USP of the phone is the punch-hole display that was first introduced as Infinity-O display by Samsung last year. The phone has Qualcomm Snapdragon 710 SoC, and comes in 4GB, 6GB, and 8GB RAM variants. The phone houses a 16MP camera sensor in the cavity of the display. On the back is a triple camera setup and a fingerprint sensor.