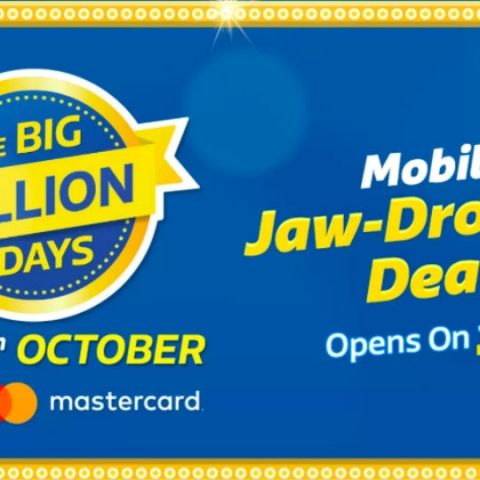 Flipkart will be holding its annual festive Big Billion Days Sale starting October 10 till October 14 and apart cashbacks and price drops, the platform will also be offering mobile insurance plans, discounts, no cost EMIs and more during sale days. HDFC Bank debit and credit card holders will get an extra 10% instant discount, while Flipkart Plus members will get exclusive early access to deals on October 9 and October 10 for 3 hours starting 9PM.

Before the sale mania begins, Flipkart has listed some of what it calls its “Jaw Dropping Deals” on mobile phones. Take a look

The Moto Z2 Force, motorola’s modular smartphone, will cost you Rs 17,499 during the Flipkart Big Billion Days Sale down from Rs 34,999.  It is powered by the Qualcomm Snapdragon 835 chipset coupled with up to 6GB of RAM and up to 128GB of storage. It also features a dual camera stack at the back. There are dual 12-megapixel sensors with one capturing light in colour, and the other in monochrome. Both lenses have Sony IMX386 sensors with 1.25-micron pixels and f/2.0 aperture. The camera features PDAF, laser autofocus and a CCT dual-LED flash. The camera offers bokeh effect, background replacement and real-time as well as post-shot depth of field manipulation. On the front is a 5-megapixel shooter with f/2.2 aperture, 85-degree wide-angle lens and a front-facing flash.

You can buy the Moto Z2 Force during the Flipkart Big Billion Days Sale here.

Samsung’s flagship device from last year, the Galaxy S8 (64GB) will be available at a price of Rs 29,990 after getting a flat discount of Rs 20,000. Previously, Samsung had slashed the prices of the flagship smartphone to Rs 49,990. The phone will also get a no-cost EMI option starting at Rs 3,333/month during the Big Billion Days Sale. The Galaxy S8 has a 5.8-inch display panel and is available in 4GB RAM/64GB local storage variants. The smartphone features a 12MP Dual Pixel camera and a 3000mAh battery. It also comes with Samsung Pay, the mobile payment service and an Artificial Intelligence (AI)-powered virtual assistant Bixby.

You can buy the Samsung Galaxy S8 during the Flipkart Big Billion Days Sale here.

The 2018 flagship Asus ZenFone 5Z will be available for Rs 24,999 down from Rs 29,999. OnePlus users can also exchange their device and get the ZenFone 5Z for Rs 21,999. The Asus Zenfone 5Z sports a 6.2-inch full-HD+ LCD screen with a 19:9 display aspect ratio. The notch houses the front-facing camera, the earpiece and other sensors. It is powered by the Qualcomm’s Snapdragon 845 SoC and in terms of optics, the smartphone is equipped with a 12MP + 8MP dual-rear cameras with a f/1.8 and a f/2.2 aperture lens respectively. On the front, it sports an 8MP sensor with f/2.0 aperture lens and 84-degree field of view. Both the front and rear cameras support EIS as well. The device runs on Android 8.0, features Face Unlock and comes with a rear-mounted fingerprint sensor as well. It is backed by a 3300mAh battery that supports Qualcomm’s QuickCharge 3.0.

You can buy the Asus ZenFone 5Z during the Flipkart Big Billion Days Sale here.

Xiaomi’s flagship from last year, the Mi Mix 2, will be available for Rs 22,999 on the Flipkart Big Billion Days Sale, further down from its dropped price of Rs 29,999. To recall, the Mi Mix 2 is the company’s almost bezel-less smartphone, powered by the Qualcomm Snapdragon 835 platform, coupled with 6GB RAM and 128GB of internal storage. It features a 5.99-inch full-HD+ LCD display with a resolution of 1080 x 2160 pixels. The smartphone has a 3400mAh battery. In terms of optics, the Mi Mix 2 is equipped with a dual rear camera setup where one is a 12MP wide-angle lens and other is a 12MP telephoto lens. It is equipped with a 1.4-micron pixel Sony IMX363 sensor and features dual-pixel autofocus (dual PADF). On the front is a 5MP sensor, which supports face recognition as well.

You can buy the Mi Mix 2 during the Flipkart Big Billion Days Sale here.

You can buy the Honor 10 during Big Billion Days Sale here.

You can buy the Nokia 6.1 Plus here and Nokia 5.1 Plus here during Big Billion Days Sale.