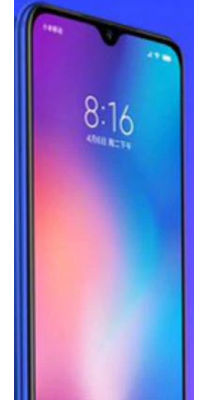 Xiaomi Mi 9 is announced to be launched in November 2019 & will run on Android 9.0 OS. The Smartphone will be available in more than three color options i.e.Lavender Violet, Ocean Blue, Piano Black, Transparent & will also have a built in fingerprint sensor as the primary security feature, along with the host of connectivity options in terms of 3G, 4G, GPS, Wifi, NFC Bluetooth capabilities. The phone will come with 128GB of internal storage.

The Smartphone will be powered by 2.84 Octa core Qualcomm SDM855 Snapdragon 855 (7 nm) Processor. A 6GB of RAM will ensure phone runs smoothly even the most memory intensive applications & show no signs of lag. 128GB oof internal storage will not be open for expansion at all.

The Phone will come with a large 3300 mAh battery to support it's 6.39 inch screen with Super AMOLED display having a resolution of 1080 x 2280 at 403 ppi. The screen is to be protected by a durable Scratch Resistant glass.

Xiaomi Mi 9 will boasts of dual primary camera of 48 + 16 + 12 megapixel and 20 megapixel front Camera. It will support Face Detection and high dynamic range(HDR) imaging as well. Xiaomi Mi 9 was launched by the company in early 2019. Now the company is gearing up to launch the Mi Note 10 which has a 108MP rear camera. The Mi Note 10 is expected to be released in Jan 2020.

The Xiaomi Mi 9 Pro 5G smartphone was unveiled earlier this year and is powered by Snapdragon 855+ SoC. It has a triple rear camera, 40W fast charging, and runs MIUI 11.

XIAOMI MI NOTE 10 PRO has been released by the company which includes a Penta rear camera setup and a 32MP front camera. Under the hood, the phone is powered by a Qualcomm Snapdragon 730G octa-core processor and 8GB of RAM. The device runs on Android 9.0 OS.

Xiaomi MI Mix 4 and Xiaomi CC 11 are one step closer to launch after appearing on TENAA. Both Xiaomi smartphones have an expected launch date of later this year. The Xiaomi Mi Mix 4...

The Xiaomi Mi 12 has leaked online along with the specs that show it to be a big flagship killer. Notebook check recently reported on the Xiaomi Mi 12 Ultra and now they have some information related to...

Earlier this month, the OnePlus 9 and OnePlus 9 Pro were caught in the midst of a controversy that has since raised several uncomfortable questions for the company. While initially, the company chose to not...