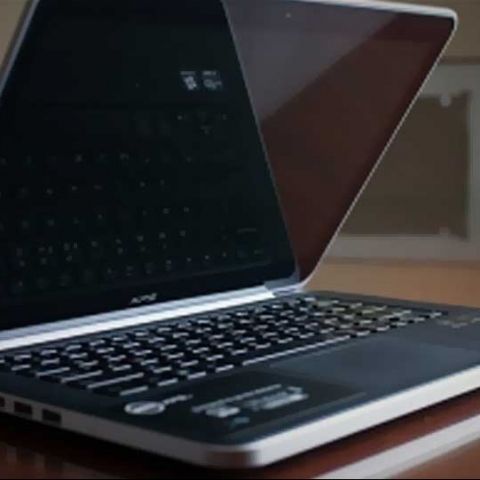 The Dell XPS 14 is the latest arrival in the Dell XPS ultrabook family, and its desirability factor is more powerful than ever. The updates (over the XPS 13) include a bigger display and the latest Ivy Bridge power package. The build and the materials used are still as brilliant as before - aluminum lid, magnesium palmrest with soft touch and a heat absorbing silicon base. It feels slightly heavier than what you would expect though, and is definitely on the pricier side.

Till now, the Dell XPS 13 ultrabook had, by far, been the perfect all rounder – with excellent looks, a very premium finish and impressive performance scores. However, the new kid on the block, the XPS 14, is looking to take over that mantle. Can it do that? From what we have seen, it surely does!

Build & Design
We were more than impressed (and considerably surprised, admittedly) with the Dell XPS 13 (read our review). The efforts Dell put in on making that ultrabook are more than acknowledged and appreciated. Even more surprising was the fact that the desired effect was achieved with possibly the most humble and minimalist ultrabook. Quite expected then, that the next generation from the same line of ultrabooks, would follow the same path.

The XPS 14, right out of the box, looks like one solid slab of aluminum, with a very matter to fact look. That however, doesn’t take away the fact that a lot of exotic materials have been slapped on to this ultrabook, to give it the real high-end feel. Gone is the carbon fibre that was quite predominant on the chassis of the XPS 13, and has been replaced with the triple team of aluminum, magnesium and silicon. The XPS 14’s lid has the grey aluminum finish, with the Dell logo in the middle. Open it up, and a black matte finish greets you around the keypad, and the keypad itself. The material used here is the magnesium, given a soft touch finish. Popularly known as the “rubberized” feel, we would prefer something like this any given day on our laptops over a glossy or even the remotely shiny enamel finish.

A similar finish extends to the touchpad as well, which has integrated right and left click keys. There are absolutely no quick access keys spread around the XPS 14 to ruin the looks.

On the base, the carbon fibre from the XPS 13 has given way to silicon. This is a heat absorbing material, and there is a pretty thick layer of it. Essentially, if you are using the XPS 14 on your lap for long periods, the chances of it becoming uncomfortable have been reduced to a large extent. On the near and the far sides are two channels of vents that really blow out the warm air. You should be very careful to not block any of these.

The left side of the XPS 14 has a couple of USB ports, HDMI out and the Ethernet port. The right side has just the 3.5mm jack. With the dimensions of the laptop, particularly the thickness, exactly the same at the front and at the back, this does give the resemblance similar to a MacBook Pro.

A strip of silver runs around the entire machine, as a wraparound. Quite a nice add-on, and contrasts well with the black magnesium that is predominant once you have opened the lid of the XPS 14.

We really did not find any shortcomings in terms of the design, the build and the way the machine was put together. It resembles a MacBook Pro, but that is where any similarity stops. The XPS 14 has a very premium finish, and the materials used do lend it that extra classy touch. Absolutely no rough edges, so much so that we could not find any flex on any part of the chassis, including the lid! Now that does say something about the efforts that have been put into making this look and feel worthy of the price tag it commands.

Features & Specifications
As expected, the Dell XPS 14 has the latest Intel Ivy Bridge processors. The model we received is powered by a Core i5-3317U, the same as we saw on the HP Envy 4, the Samsung Series 5 and the Sony Vaio T. The review unit is essentially the mid-range model with 4GB of RAM and a 500GB hard drive that has a box price of Rs. 85,299. 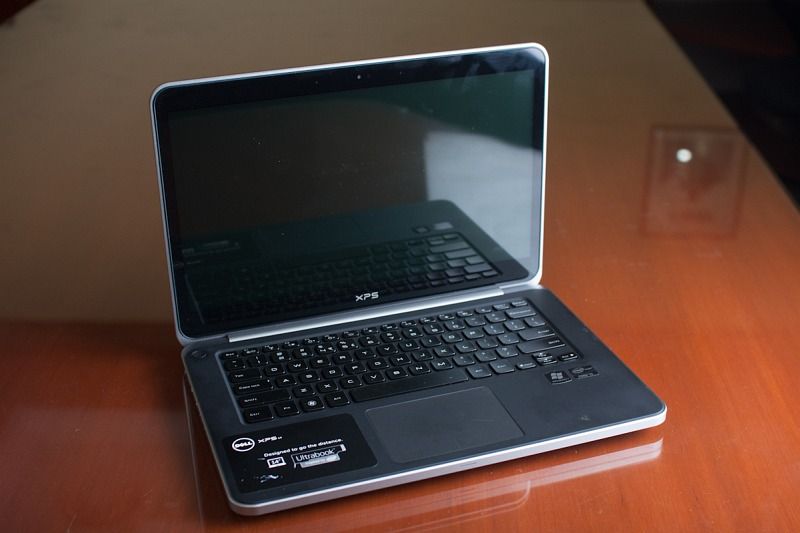 Beyond the excellent build and design, the XPS 14 continues to impress. The 14-inch display has a resolution of 1600 x 900 pixels. This is more than the 1366 x 768 pixel resolution that most ultrabooks in this price range tend to offer. The results are rather impressive – the display is a lot crisper than what most ultrabook displays offer. There is a lot of goodness in terms of the specs here as well – the Gorilla Glass with the edge-to-edge deployment doing away the need for a plastic bezel. This is brighter than the HP Envy 4-1002TX and the Samsung Series 5, but just like the XPS 13, handles colours very well. The sharpness, added to the excellent colour handling, makes this the perfect companion for watching a movie on the move. The only negative we can find with this display is that it is slightly reflective, and slightly more than the HP Envy and even the predecessor. You will have to turn up the brightness to compensate for the reflections from the environment, but that does not wash out the colours!

As with most keyboards, it is more of a personal matter of preference and comfort. The keyboard on the XPS 14 is the type that will feel a tad flat in the beginning. The key size is slightly wider than the usual, but once you get used to the layout, this keyboard does offer a very precise feel. The travel is adequate, and the keys have a nice sounding thud. The backlighting is quite good, with the keys as well as rows illuminated in a white cool colour. The touchpad also has the soft feel, with the integrated right and left click keys. In terms of response, it is quite consistent and assured, and even slightly moist fingers don’t make it jump around. 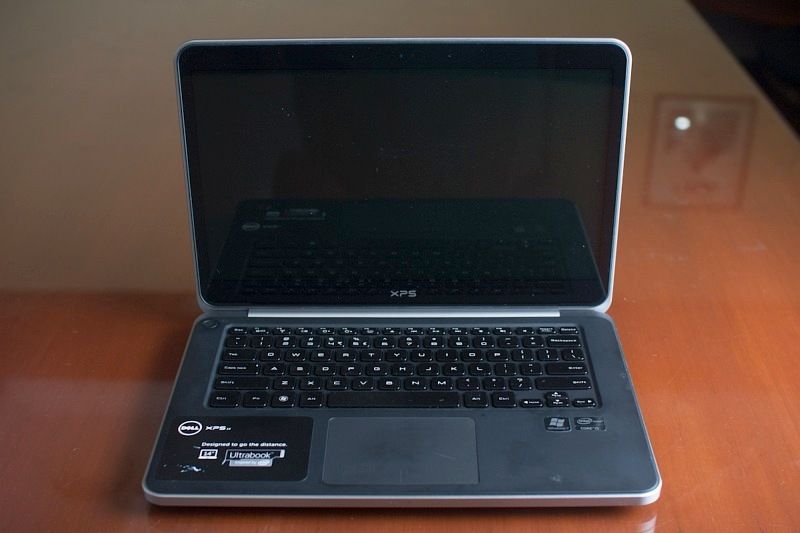 The area around the keyboard is completely uncluttered, thanks to no quick access keys cluttering up the look. The power key also blends in very well with the black coloured finish.

Our review unit has a 500GB hard drive, with 32GB flash storage dedicated for caching tasks. This has become a regular feature in most of the newer ultrabooks, and the real world usage performance boost is immense. However, this is something we had mentioned in the review of the HP Envy 4 as well – Neither HP nor Dell offer a nifty little software like Samsung, that lets you manually enable or disable the flash storage, and manually clean it up if you want to.

Performance
With the same processor as the HP Envy 4 and the Samsung Series 5, we did not expect the performance to be very different. While the Dell and the HP get 4GB of RAM as standard, Samsung offers 6GB with the Series 5. As far as benchmarks were concerned, all three machines did pretty similar scores, thanks to the relatively similar hardware.

In the PC Mark 07 test, the XPS 14 scores 3159 while the Envy 4 isn’t far behind with 3150 clocked. The Samsung Series 5 did score a bit less with 2371, but that shouldn’t take away anything from the fact that the performance is still rather good. Samsung gets its own back in the PC Mark Vantage test with a score of 7465, which is higher than the 7383 the XPS 14 scored. The HP Envy 4, incidentally, had a whopping score of 9966 in the same test.

In terms of real life usability, all three machines offer a relatively similar experience – quick startup, zippy application response, no slowdowns while multi-tasking and a generally smooth Windows experience. The critical bit is the additional flash storage for the caching tasks, and while Samsung has 24GB of that, HP and Dell offer 32GB each. This is over and above the conventional HDD that will be the primary storage device.

Gaming is where the HP Envy takes the advantage, thanks to the more powerful AMD Radeon HD7670M (2GB) graphics solution. While the Nvidia GeForce GT630M (1GB) on the XPS does stand up to the 7670M on the Envy for quite a while, it does lose out in the frame rate stakes. In the Unigene benchmark test, the GT630M scores 17.8 while the Radeon HD 7670M on the Envy scores an impressive 25.9 FPS. The performance is verified by the CineBench OpenGL test – 30.26 for the XPS 14 and 33.78 for the HP Envy 4.

In our full stress load battery tests, the XPS 14’s battery lasted 210 minutes on a single charge – that is 3 hours and 30 minutes. Translate that into a traditional daily usage routine at work or at home checking mails and browsing the web with the brightness slightly less than 50%, we got a backup very similar to the HP Envy 4 – around 7 hours easily.

Bottom Line
You must be wondering why we are comparing the Dell XPS 14 to ultrabooks that are considerably lesser priced. There is a reason for that! The idea being simple – the hardware you get with the XPS 14 is very similar to what you get with the HP Envy 4 and the Samsung Series 5, but you are paying about Rs. 30,000 more for the Dell and the exotic materials used on the finished product. Currently, none of the other similarly priced, but slightly better-specced ultrabooks – such as the new Samsung Series 9 ultrabook or HP Envy Spectre, have been made available to test.

Having said that, if the XPS 14 is well within your budget, then the admittedly superb build quality is something that will be a delight. The use of different materials across the same chassis lends it a very premium feel. Not a surprise then that the XPS 14 will be equally comfortable in a teenager’s college dorm room as well as in the executive board room of a Fortune 500 company. 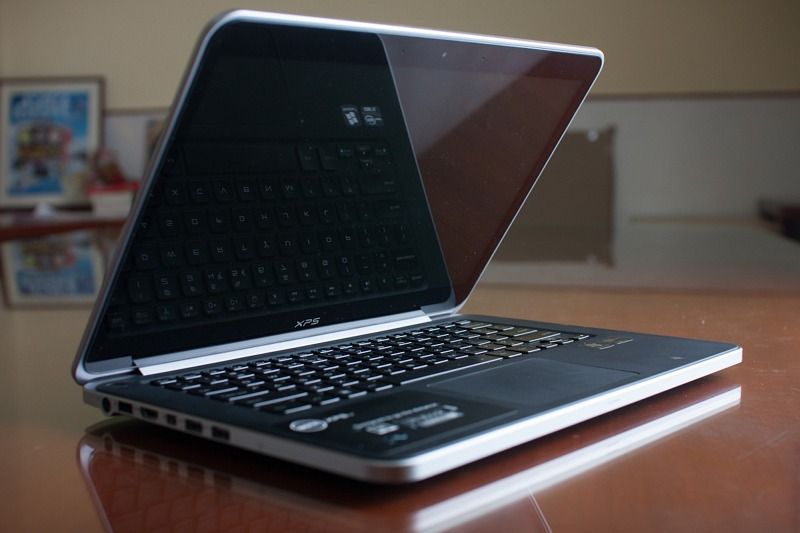