Nokia 7 Plus is seen featuring a thin-bezel display with dual Zeiss cameras and the Android One logo at the back. The Nokia 1 smartphone sports a smaller design and is expected to be launched running on Android Oreo (Go Edition). 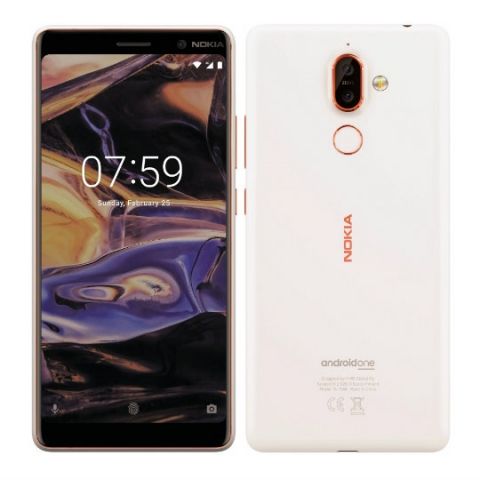 HMD Global is expected to showcase its 2018 lineup of smartphones at MWC 2018, however, renders of its Nokia 7 Plus and Nokia 1 have leaked online ahead of the event. Evan Blass tweeted the alleged renders of both the smartphones, giving a clear look at the entry-level Nokia 1 and the thin-bezel Nokia 7 Plus, which sports the Android One branding on the rear.

Starting with the Nokia 7 Plus, the handset is seen featuring a thin-bezel display with rounded corners and the Android One logo at the back. The Nokia 7 Plus is seen equipped with dual vertically placed rear Zeiss cameras with an LED flash. The power button and volume rockers are placed on its right edge, while the fingerprint sensor rests below the rear cameras. Even though it’s hard to decipher the screen size based on the images, the Nokia 1 can be seen with a smaller form factor and similarly, a smaller display. It features a single rear camera and it is speculated to be the first Nokia smartphone to be running on Android Go (Oreo Edition).

As for the specifications, a previous report suggests that the Nokia 7 Plus could feature a 6-inch Full HD+ display with a resolution of 2160x1080 pixels and be powered by the Qualcomm Snapdragon 660 SoC coupled with 4GB of RAM and 64GB of onboard storage. It is rumoured to sport a dual 12MP+13MP rear sensors and come with a 16MP front-facing camera. The device is speculated to be backed by a 3000mAh battery with Quick Charge support and feature a USB Type-C port.

A previous report claims that the Nokia 1 will feature an IPS display with a 1280x720p resolution. Being an entry-level device, it is speculated to be powered by a MediaTek SoC and 1GB RAM with 8GB of internal storage. It is said to be running on Android Oreo (Go Edition), which is a light OS tailored for smartphones with RAM between 512MB and1GB.

To recall, Google announced that the Android Oreo (Go Edition) smartphones will come with Android Go Apps, which are specially optimised for their slower hardware. Some of the apps are Google Go, Maps Go, Files Go, Assistant Go, YouTube Go, and more. You can read more about the light-weight Android OS here.