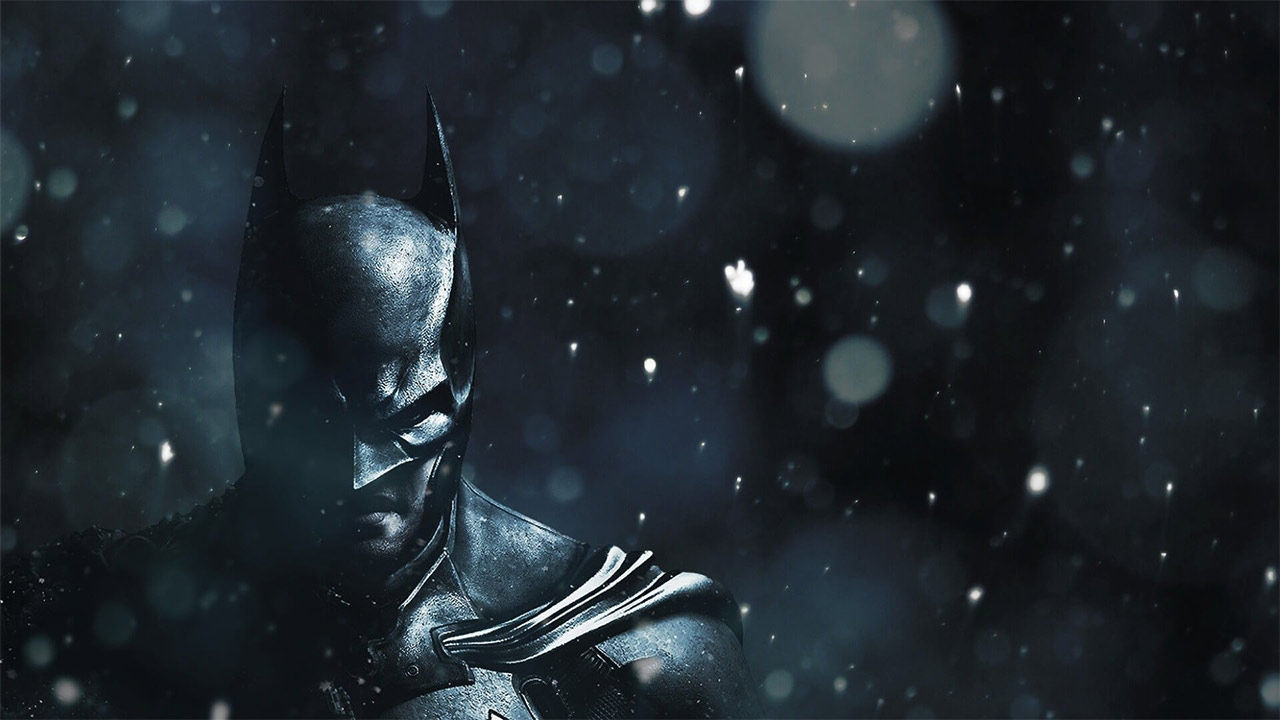 WB Games Montréal has released yet another cryptic teaser for their long-rumoured, new Batman game, leading up to DC Fandome on 22 August 2020.

Update 4: We are only hours away from WB Games Montréal’s official announcement for their new Batman game at DC Fandome. And with that, their 4-day teaser campaign has also come to its conclusion. For the final tease, the infamous Twitter account - r3dakt3d has released a new set of cryptic images. One of them being a safe dial lock, while the other 3 points to clues and instructions that reveal the final secret. The middle of the dial bears the Court of Owls insignia, further confirming their significance in this iteration of the game.

Upon aligning the clues individually with the dial image and turning it accordingly to form full shapes i.e., circle, triangle and diamond, it spits out the code 995. Entering the code (read below) on the official website brings forth an unlisted YouTube video. The glitchy video features what looks like the inside of the Belfry aka the secret base built inside the Old Wayne Tower, based on the 2016 comic book series Gotham Knights. Which is again rumoured to be the potential title for the game. In the video, you see part of a monitor screen displaying a map of Gotham City with a pop-out stating the source of information - “GCPD DATABASE”. At the backdrop of the monitor, you see the numerous illuminated gears that keep the clock tower functioning. Which looks eerily similar to Barbara Gordon’s secret base at Panessa Studios in Rocksteady’s 2015 title - Batman: Arkham Knight.

Update 3: With DC Fandome approaching closer than ever, WB Games Montréal is still going strong with their teaser campaign for the upcoming Batman game. For Day-3, the mysterious Twitter account - r3dactk3d, has posted an image of a golden art-piece of a man forging a shovel, accompanied by a text saying, “L00k cl053r. 8.22.20.” The bare-bottom of the said image features a parliament of owls, further solidifying the involvement of the Court of Owls in the upcoming title.

As instructed in the tweet, upon further inspection, it comes to light that the image contains the code numbers leading onto the next clue (read below). Entering the code - 364 in the official website lets you download another image of an in-game map file. This time, however, a bigger one with another checkpoint pointing onto what looks like the top of an abandoned construction site. 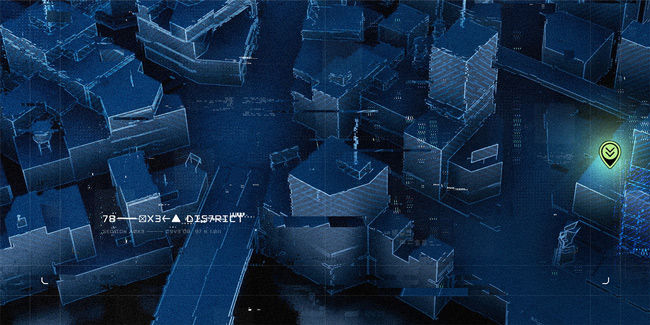 As mentioned in the previous update, it seems like, all the uncovered pieces do in fact combine together to form a larger map, giving an overview of the massive, corrupt city of Gotham.

Update 2: On Day-2 of their teaser campaign for the upcoming Batman game, WB Games Montréal has released yet another teaser. The company’s dedicated Twitter account for the game’s promotion - r3dakt3d, has made another one of their signature-styled cryptic tweets. This time around, it features a jumbled phrase which translates to, “the truth has been scrambled”. And a tile puzzle, which upon solving provides more clues about the game.

Solving the puzzle results in a new emblem and gives out the access code - 941. Which is supposed to be entered into their official website, after bypassing the Day-1 phase with the code - 761 (read below). Once you enter the code, the site grants you the option to download a new image file, which was already leaked earlier by some dedicated fans on Twitter. The downloaded image features what looks like the adjacent part of the previously revealed in-game map file. And it seems like, the images are supposed to eventually converge and complete the entire map set-piece, over the next four days. 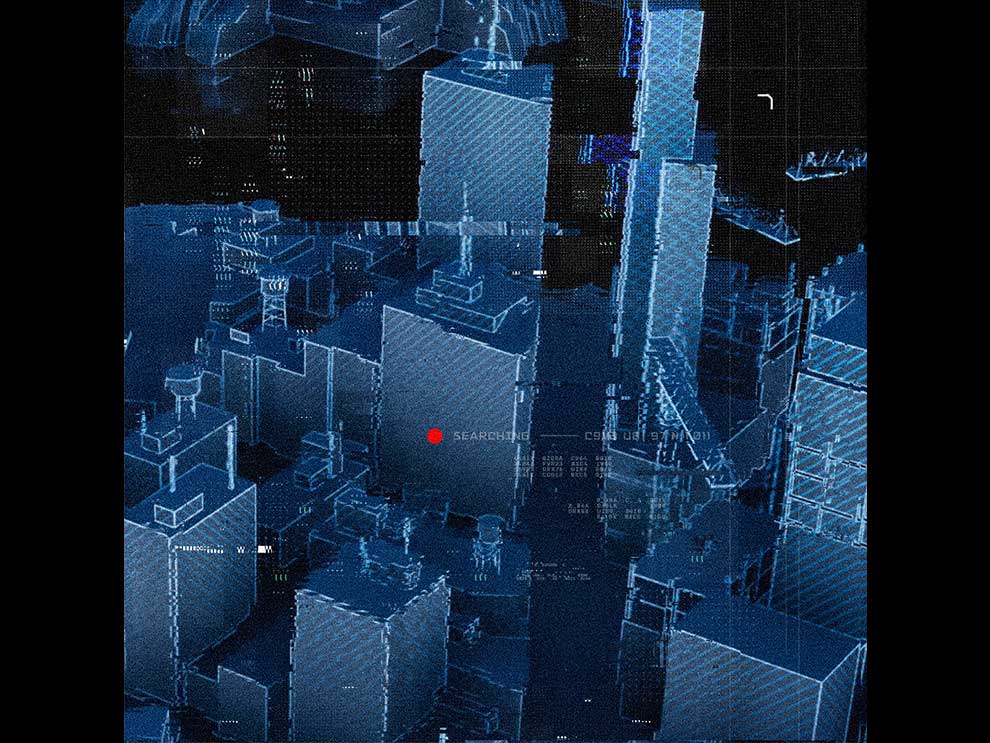 Once you are finished unlocking the content, the website displays a glitchy GIF image with the phrase - “FACE TWO FACE”, hinting at the possible involvement of the schizophrenic criminal mastermind - Harvey “Two-Face” Dent, in the new game. 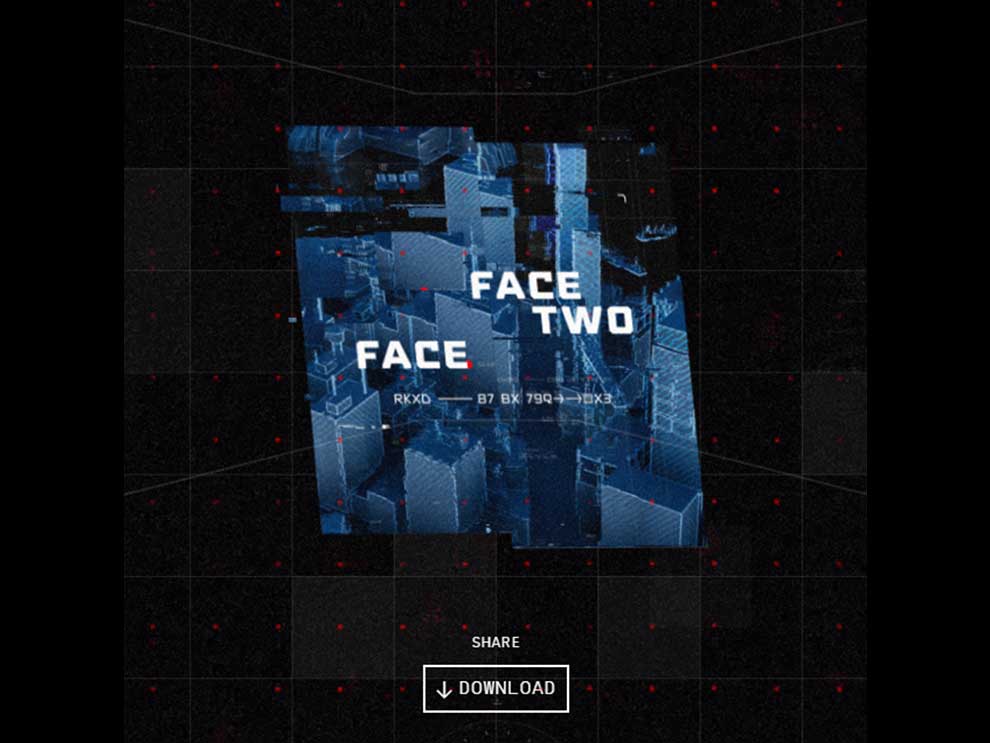 Update 1: As part of the teaser campaign for their upcoming Batman game (rumoured - Batman: Gotham Knights), WB Games Montréal has released a new teaser leading up to its official announcement at DC Fandome, on 22 August 2020. In order to coordinate the interactive public event, the company had created a separate Twitter account - r3dakt3d. Where today, we saw an update with a glitchy video, featuring obscure symbols and a stretched-out, red coloured text saying, “ENTER CODE 761”.

Based on our earlier report (read below), we know that the code(s) is supposed to be entered on the official website - r3dakt3d.com, over the next four days. Upon holding the interactive button at the bottom and entering the code correctly, the site confirms it and grants you access to a “DOWNLOAD” button. Where, you get access to a piece of an in-game map image, which was already leaked, late last night. The image features what looks like part of the massively open-world Gotham City, with an objective marker pointing onto either a bridge or a dome-shaped rooftop. 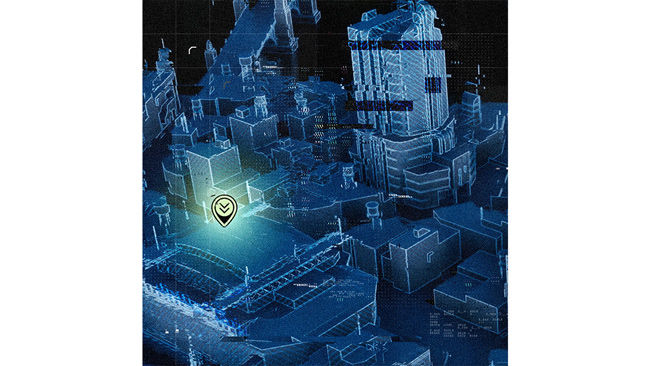 As you would come to expect with everything being leaked regarding the upcoming Batman title recently, the teaser image for tomorrow has also already been discovered. A bunch of people on Twitter found the second map file, scheduled to unravel on Day-2, within the website’s code. Based on the leaks, it looks like the images all combine together to form a bigger picture or map, as evident from the tweet below.

WB Games Montréal has released yet another cryptic teaser for their long-rumoured, new Batman game, leading up to DC Fandome on 22 August 2020. Based on the teaser, it looks like the mythical Court of Owls is in fact involved this time around. And that we will be getting more clues or details on the title within the next four days.

The news comes from an old-fashioned enigmatic tweet from WB Games Montréal. The tweet features a short video and morse code spelling out an IP address which leads to r3dakt3d.com. The video showcases a bunch of twitchy animations and imagery which links to the characters involved in the game. Of which, the most prominent one being the image of an owl, confirming the involvement of Scott Snyder’s infamous creation - The Court of Owls. 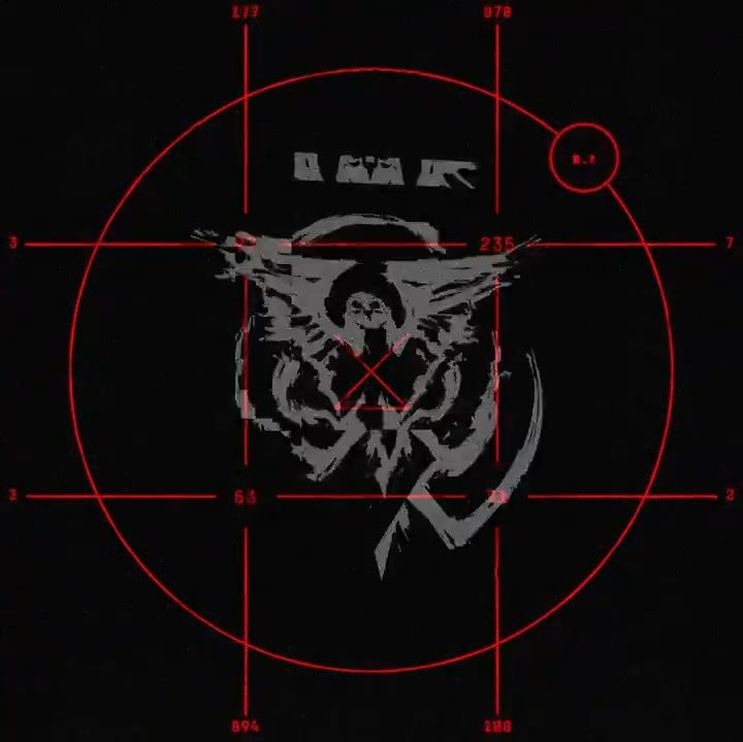 The link opens up a stylized, computer interface-themed page with tons of obscure, glitchy animations and a text which says, “WE_HAVExBE3N EXPECTING_YOU! 8/18”. At the bottom of the page, there is a countdown which leads us to believe that we will be seeing further details later tonight. Probably at around 8:30 PM, IST. 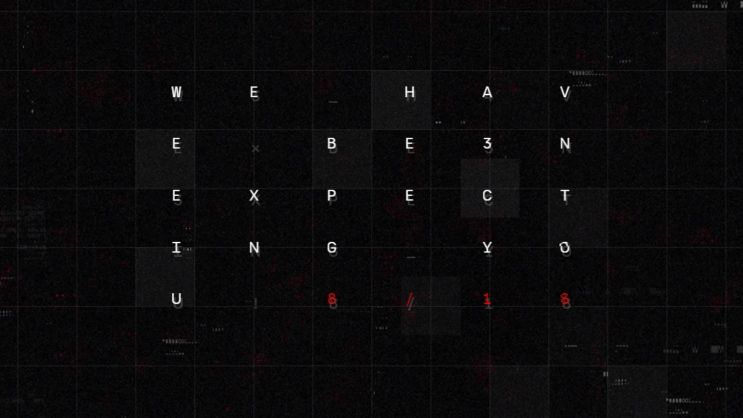 As it turns out, the website is littered with a whole bunch of secrets related to the game. As stated by twitter user MattFiler, enabling the visibility attribute for an element on the page named “hold-btn”, unlocks an interactive button in place of the countdown timer. Upon pressing that, it welcomes users to a different page asking for a 3-digit code to progress further. At the top, the page features four events in the upcoming days, which lines up exactly with the game reveal at DC Fandome. 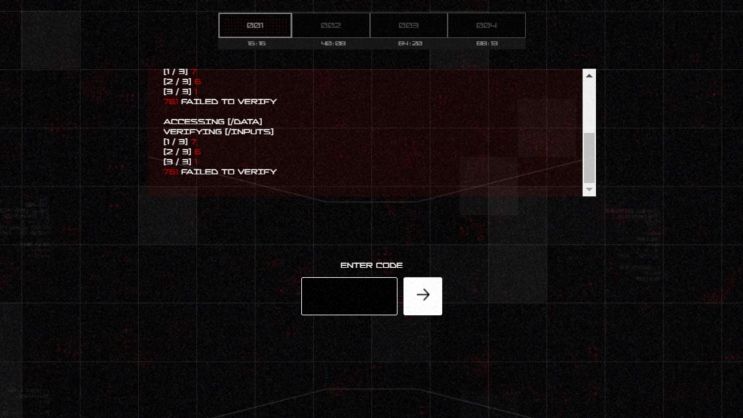 Upon cracking the code (which has been disabled now), the page ended up revealing an image, showing what seems like part of an in-game map file or a blueprint, with an objective marker pointing towards a bridge. As of now, it has not been uncovered as to what this bridge exactly connects to.

Good job on the code! Download button does work, it's just very slow. Here's what it gives... pic.twitter.com/0CQ0RRHKxJ

Back in May, we had reported on some leaks in regards to the plot and characters involved in the upcoming Batman game. Based on the information surfaced today, it seems like those leaks are eventually coming to reality. The creators of Batman: Arkham Origins have been known for sharing cryptic tweets in regards to their new game for a while now. The first teaser they dropped was back in September 2019, with the tagline “Capture the Knight / Cape sur la nuit”, featuring a bunch of symbols pointing towards the characters involved in the game. However, those teasers eventually stopped, with the last one being seen in January, early this year, featuring a Gotham City Police Department (GCPD) logo. Way before that, the involvement of Court of Owls in the new game was also foreshadowed by the Creative Director and the Associate Producer at WB Games Montréal themselves, on two separate occasions.

Based on a set of new domains Warner Bros. had registered back in June, it looks like the potential title for the game would be “Batman: Gotham Knights”, of which you can read further details here. The new Batman title will be revealed at DC Fandome on 22 August 2020 at 11 PM IST, for which you can set up your schedule and reminders here.

On the same day, Rocksteady, creators of the Batman Arkham franchise will also be revealing their upcoming Suicide Squad: Kill the Justice League game, of which you can check out further details here.