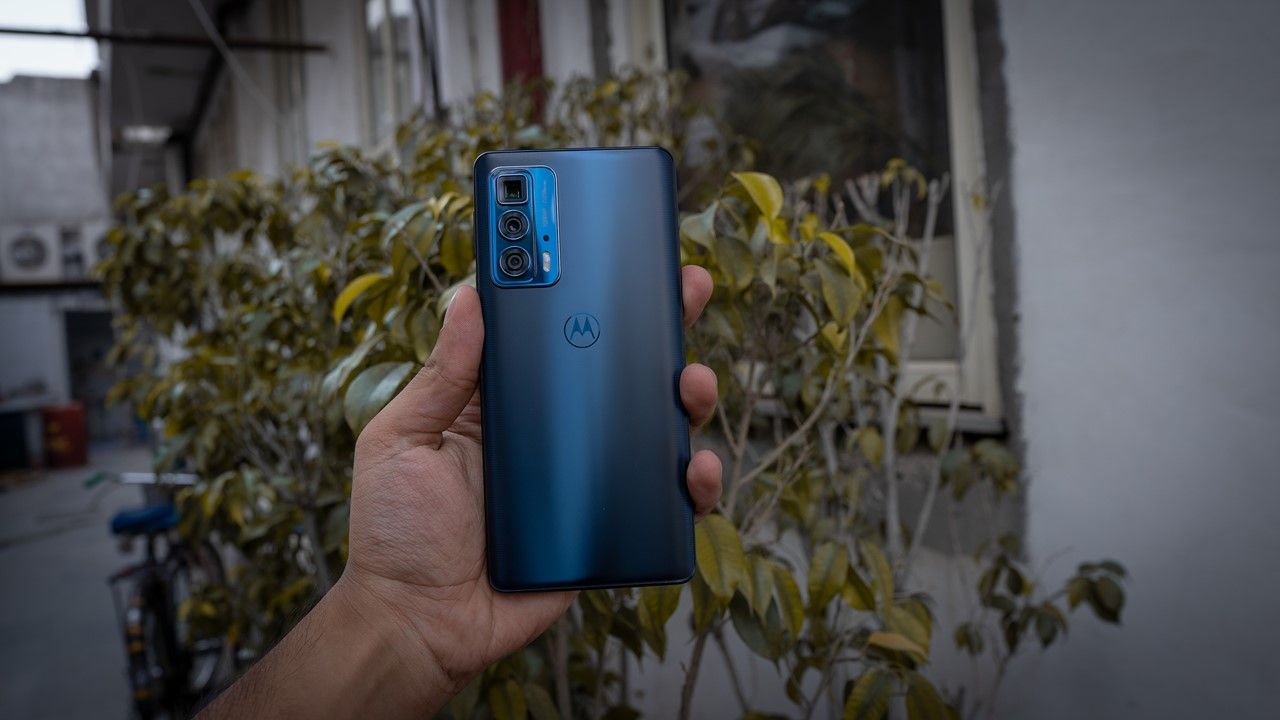 The Motorola Edge 20 Pro is the latest affordable flagship smartphone in India that takes on the likes of the OnePlus 9R (review), Mi 11X Pro and iQOO 7 Legend (review) to name a few. The Edge 20 Pro has a premium look and feels with a glass-sandwich design topped with a large flat display, but that does not diminish the fact that it packs a powerful punch with the Snapdragon 870 SoC under the hood. 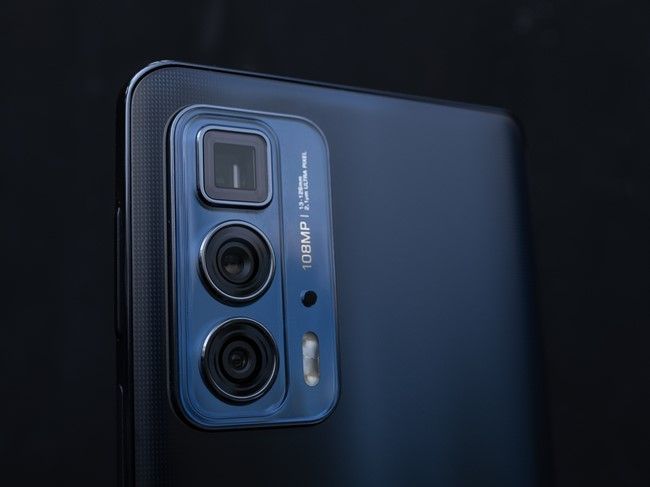 The Motorola Edge 20 Pro is powered by the Qualcomm Snapdragon 870 chipset, which has an octa-core CPU with a 3.2GHz Prime Kryo 585 core, three 2.42Ghz performance cores and four 1.80GHz power-efficient cores. This is paired with the Adreno 650 GPU and 8GB LPDDR5 RAM with 128GB UFS 3.1 storage. To top it off, the Edge 20 Pro runs on stock Android 11 out-of-the-box with some Motorola specific features. 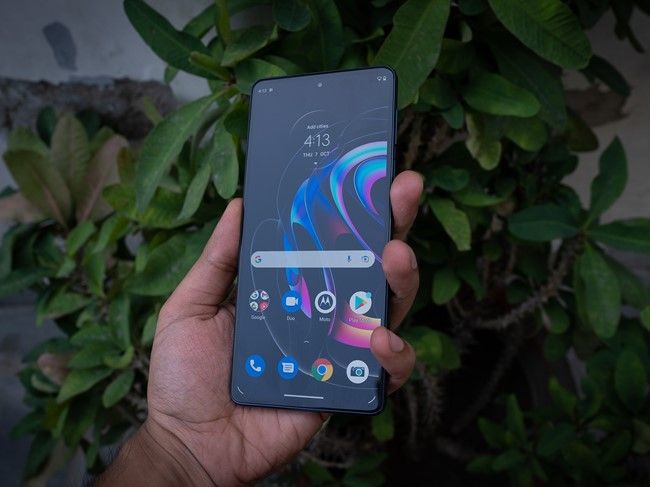 It features a 6.7-inch Full HD+ (2400x1080 pixels) resolution OLED display which uses a 10-bit panel that offers support for over 1 billion colours with upto 144Hz refresh rate and HDR10+ certification. It’s got a 108MP primary camera with an f/1.9 aperture, an 8MP periscope telephoto camera with 5x optical zoom with OIS, and a 16MP ultra-wide camera with 119-degree FOV. On the front, there is a 32MP selfie camera. The Edge 20 Pro is equipped with a 4,500mAh battery that supports 30W fast charging. 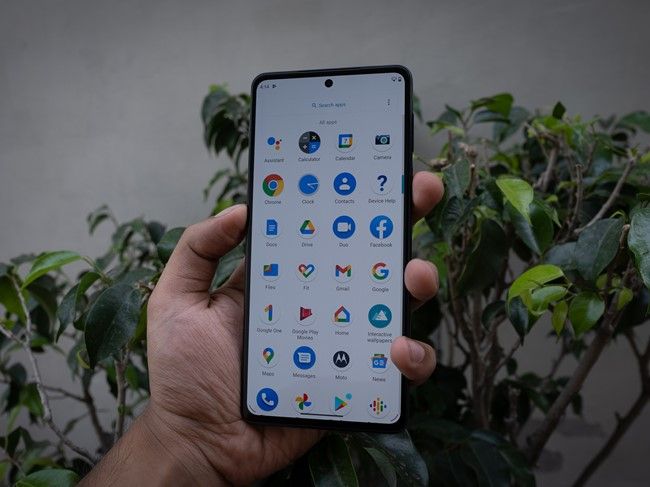 The Motorola Edge 20 Pro gives tough competition to the OnePlus 9R even though both phones are powered by the same chipset. There are not a lot of stock Android options available in this price range which is where the Edge 20 Pro comes in as it runs on stock Android 11 and a largely untouched UI.

The animations are smooth and look even better when the default refresh rate is set to 144Hz as it makes the whole experience so much more fluid.

The Edge 20 Pro is a fairly large phone with an equally large display which is what makes it a compelling option for people who watch a lot of movies and videos on their phones or those who play games on their phones regularly.

The display has a 576Hz touch latency rate which means it can register touch inputs at an astonishingly fast speed and anyone who plays games will understand the importance of fast touch response rate.

The general performance of the Edge 20 Pro remains snappy, navigation across the interface is very smooth and app load times are instant which is great for regular use. 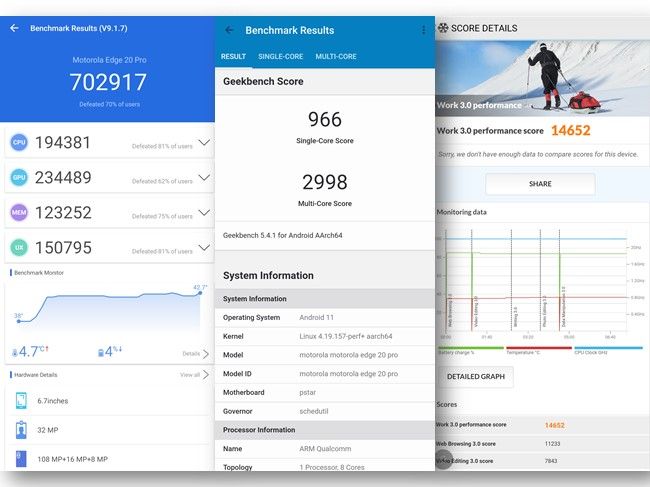 When it comes to synthetic benchmarks, the Motorola Edge 20 Pro got 702917 points on the AnTuTu benchmark, which is a good score. By comparison, the OnePlus 9R received 603500 points.

In Geekbench tests, the Edge 20 Pro got 966 points in single-core tests and 2998 points in multi-core tests, which are similar to OnePlus 9R scores.

The Edge 20 Pro got 14652 points in PCMark Work tests, which grades the performance of a phone by running browsing, video editing, photo editing, and many more workloads. This proves that the Edge 20 Pro is fairly competent in handling these tasks. Incidentally, the scores of Edge 20 Pro are higher than both the OnePlus 9R and the Mi 11X Pro, which means that this phone is better optimized for daily tasks.

We also ran a CPU throttling test which checks whether the CPU throttles under extreme workloads or not. The Edge 20 Pro throttled to 78% of the maximum threshold, which means that the phone will lower down the performance to keep thermals in check. The phone got warm to the touch after a couple of rounds of gaming and benchmark tests, which, considering its slim profile isn’t too bad to spoil your experience. 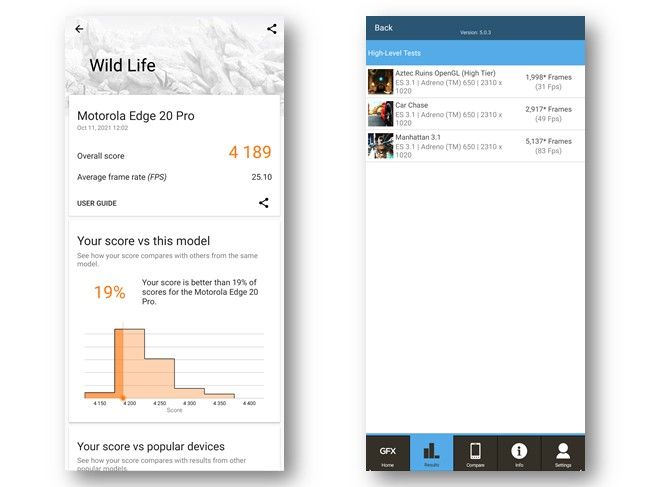 In 3DMark and GFXBench tests, the Moto Edge 20 Pro got respectable scores which is only a foretaste of its GPU capabilities. We ran multiple games on the phone with high-quality graphics and frame rates and this phone was able to keep up with the pace.

We also used Gamebench metrics to analyze the gaming performance of the Motorola Edge 20 Pro. As per the data points recorded by Gamebench, the Edge 20 Pro delivers 60FPS in Call of Duty Mobile with 90% stability which is pretty good. In Battlegrounds Mobile India (BGMI), Gamebench recorded 40FPS at a consistent 100% stability. Both games were running at the highest graphic quality along with high frame rates.

While these numbers are not indicative of the real-world performance, the Edge 20 Pro should be commended for the power it packs in a slim and light profile. My gaming experience on the Edge 20 Pro was amazing combined with a great display and a large screen estate. Though, I was left wanting more in the audio department where we just got a bottom-firing speaker unit.

Motorola Edge 20 Pro: Should you buy it?

The Motorola Edge 20 Pro offers great performance at its asking price and brings the goodness of stock Android with it. Add to the fact that it is so slim and still packs a punch is proof of Motorola’s capability in giving us affordable flagships. The Edge 20 Pro is a great and much more powerful alternative to the OnePlus 9R and delivers a solid gaming performance.

If you’re looking for a phone and do not play games often, you will be surprised at the sustained performance of the Edge 20 Pro over time. And if you play games like COD Mobile and BGMI, you are sure to enjoy the holistic experience that this phone offers.

For its asking price, the Edge 20 Pro is a good deal which isn’t to say you cannot get a better deal. If you want to expend some more and move towards Rs 40,000, there’s the Mi 11X Pro and the iQOO 7 Legend which are both more powerful and better gaming phones. However, if your budget is around Rs 35,000 you should definitely keep the Edge 20 Pro on top of your list.