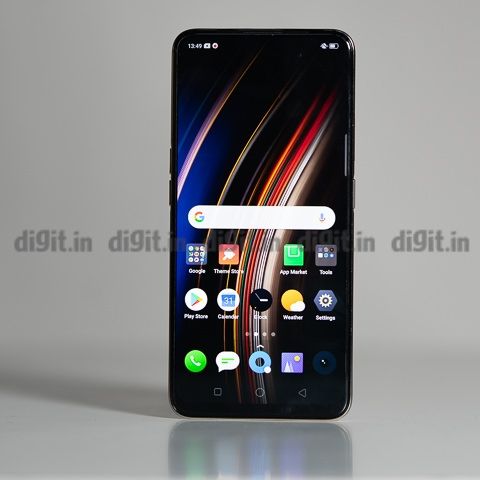 The Realme X is a solid contender from Realme for the title of the king of mid-rangers. It packs the Snapdragon 710 chipset with a superior GPU, making it impressive for gaming, and has a really bright display. The battery life is good too, but where the phone does falter is with respect to its camera.

The Realme X is the newest entrant in the midrange space, and there has been a lot of excitement and hype around it. Has it been worth it though? We’ve had the device in our lab for some time, putting it through all of our tests, to see just where the phone lands.

Talking performance, the Realme X, at the end of the day, is very much a mid-range smartphone, but it does pack a few surprises. Our unit came with 8GB RAM and 128GB storage. As far as performance goes, the Realme X scored well within our expectations of a mid-range device. We say this because when we reviewed the Realme 3 Pro, we saw it outperform the Redmi Note 7 Pro during our Gamebench tests. Here are our findings based on benchmarks and real-world testing. 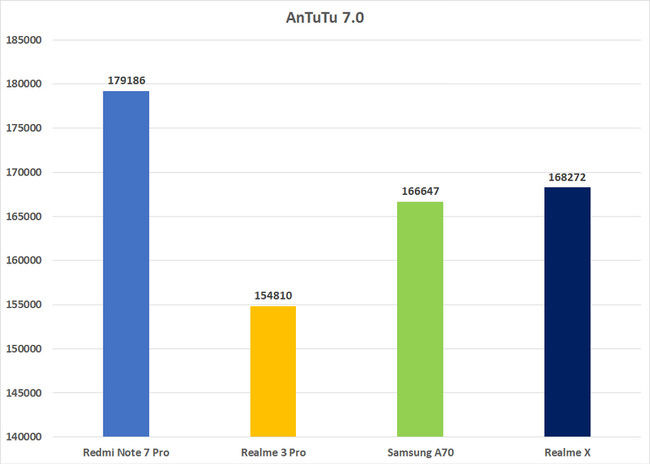 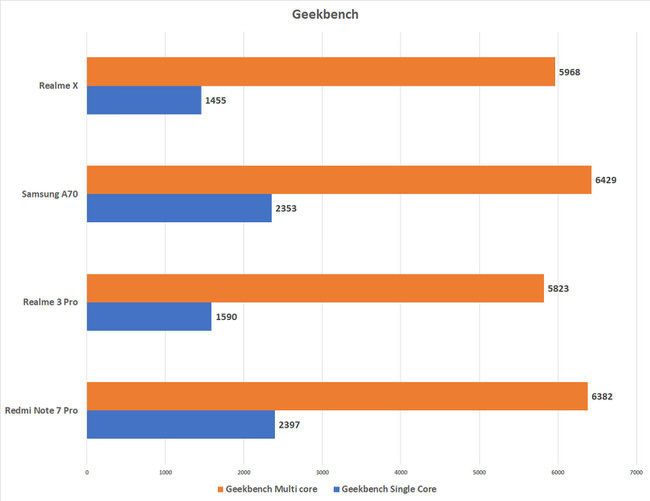 As we observe from the numbers, the Realme X has the second highest AnTuTu score of all the mid-range phones we have tested so far. Similarly, in 3DMark’s Slingshot and even in GFX Bench’s tests that are designed specifically to test out the GPU, the Realme X is far ahead of the competition. This reflects in real world performance as well where the Realme X clocks a solid 30fps of gameplay for PubG Mobile, Asphalt 9 and even Shadowgun Legends. 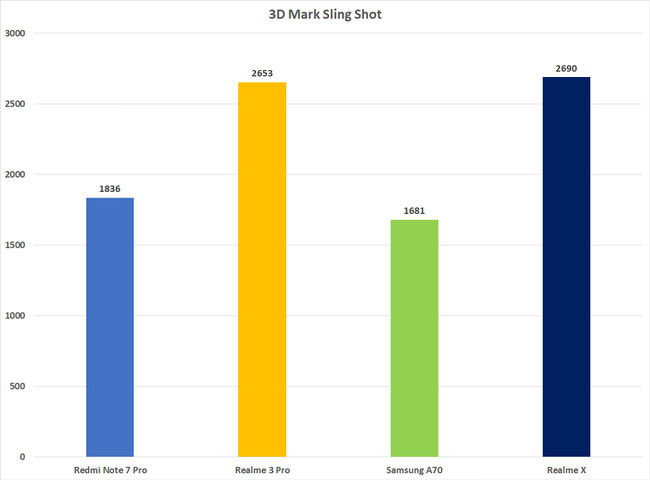 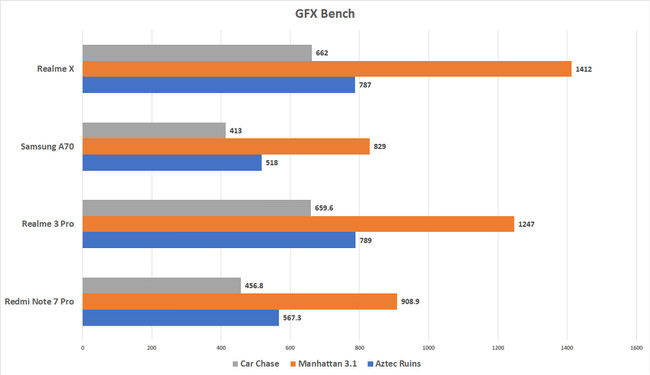 Using the phone as a daily driver, there were no hiccups while using the phone. Switching apps, working with multiple instances of Chrome and even going through a lengthy Excel sheet, the phone managed to handle all the tasks with ease.

The smoothness of the phone is as much about the hardware as it is about Software. While personally, I am not too fond of ColorOS 6, I do have to commend Realme for making the OS experience so smooth. Even with plenty of apps running in the background, the phone’s animations didn’t stutter. What I did experience were somewhat slow load times for many apps like Shadowgun Legends, MS Word and even Spotify. However, once the app was open, there was no sign of a slowdown.

Adorning the back of the Realme X, is a 48-megapixel rear camera with an aperture of f/1.7but lacking OIS. By default, the camera produces images with a binned resolution of 12 megapixels and we recommend sticking to this for the best output.  The 12-megapixel images from the rear camera are visibly sharp, with nice colours, but they lack crisp detail. This is common across phones in this segment, but we’re of the opinion that this is still not okay. When it comes to dynamic range, the HDR algorithms do a pretty decent job of balancing the highlights and shadows, managing to retain brightness even for backlit subject. When shooting in low light, the camera’s otherwise good autofocus struggles to keep up, as does the noise reduction. Suffice to say, the low light photos could be considered usable after some clever editing, but we wouldn’t put a lot of points in that basket. 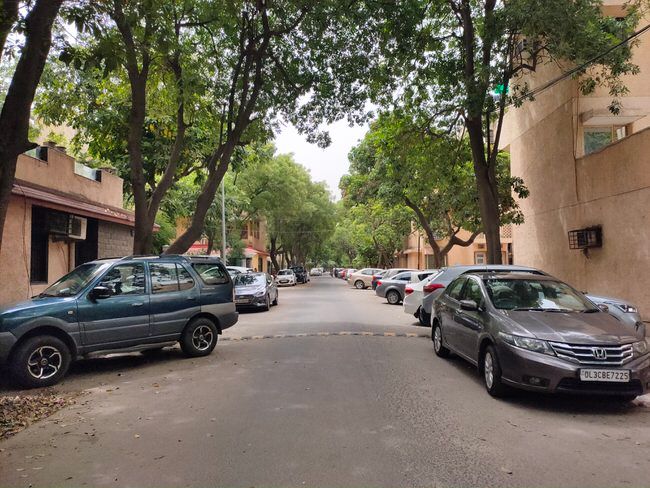 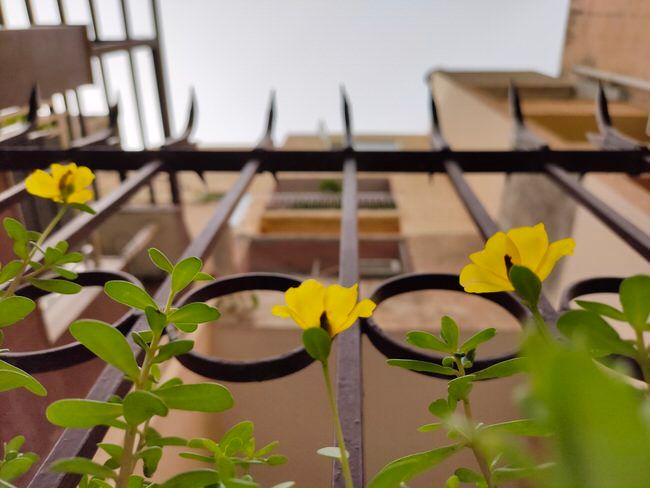 The primary camera is adept at handling backlit subjects 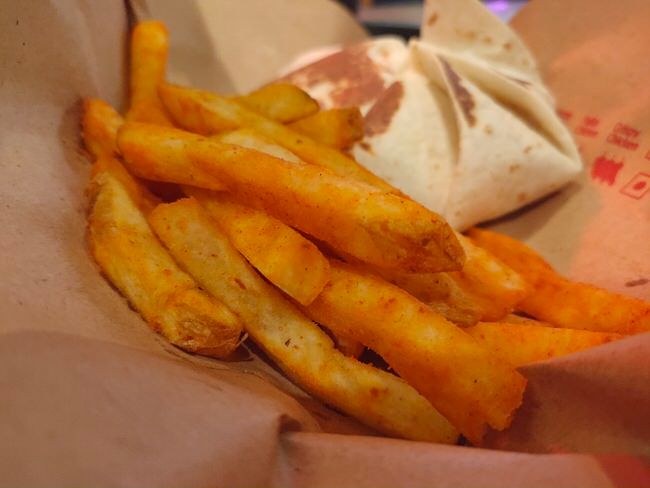 The Realme X falters a little in low light

The 16 megapixel pop up camera is also capable of binning the image to produce a crisper, more vibrant 4mp image, which we feel is absolutely fine for social media posts. This also ends up improving the results from the font facing camera. What we mean by this is that the front facing camera not only takes decent selfies in normal lighting, but can also handle a great degree of backlighting with ease. Sure it has no autofocus, but regardless, at arm’s length, you wont be complaining about AF. 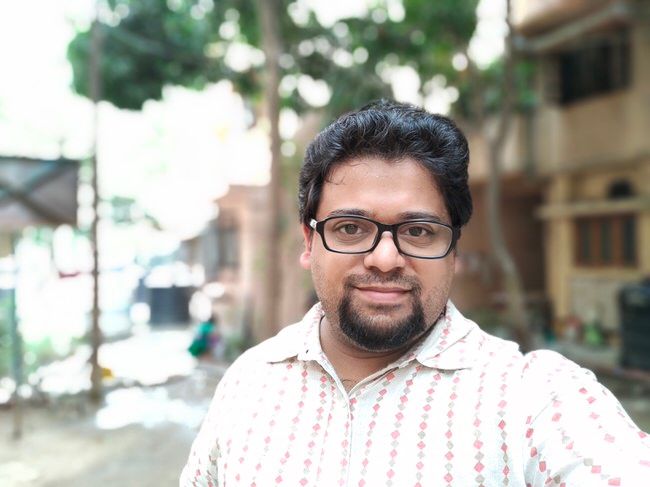 Overall, the camera results in pretty good images during the day, and just about usable images in low light. This is in-line with the kind of performance we’ve seen from other smartphones in this price segment. We have a lot more samples from the Realme X camera available in our Flickr Gallery, which we insist you check out.

The Realme X packs a 3765mAh, which at first glance, seemed a little on the smaller side to us. Then we got using the phone and realized that is not the case. On the Geekbench battery test, the phone lasted a whole 9 hours before dying. We corroborate benchmark numbers with some real work usage scenarios as well. During our video loop endurance test, the phone lasted an incredible 10 hours and 41 minutes. Playing PubG for 15 minutes drained 5 percent battery while 30 minutes of streaming videos from Netflix sucked out 7 percent juice from our slab of lithium. Add to that the fact that the battery only took 78 minutes to go from 4 percent to 100 thanks to the VOOC 3.0 technology is again impressive. The charging follows a more aggressive pattern at the beginning, filling the first 30 percent in just 15 minutes, after which, it starts to mildly slow down and become more linear. 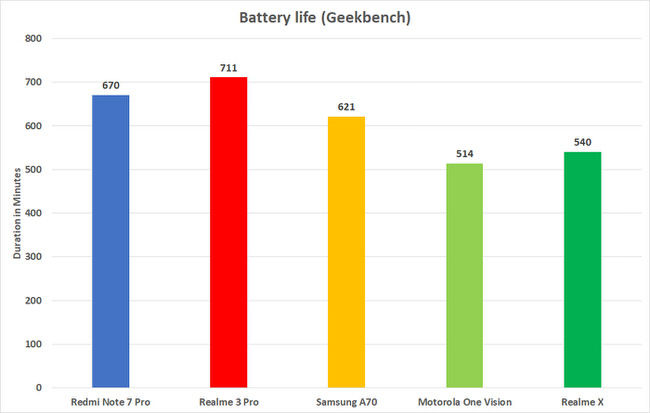 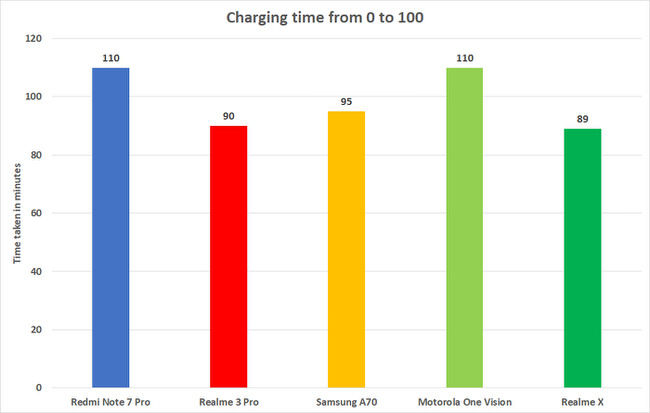 Time take to charge the Realme X vs. the competition 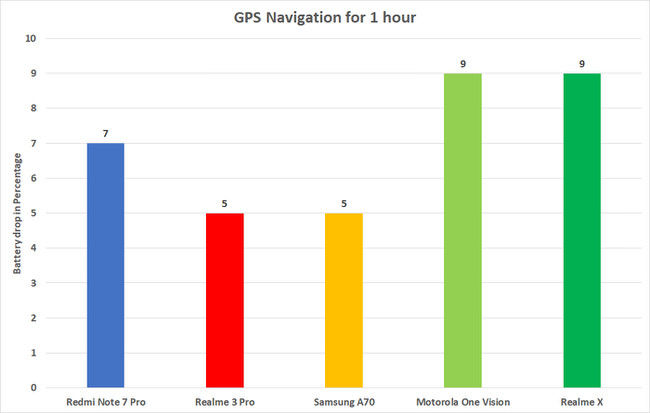 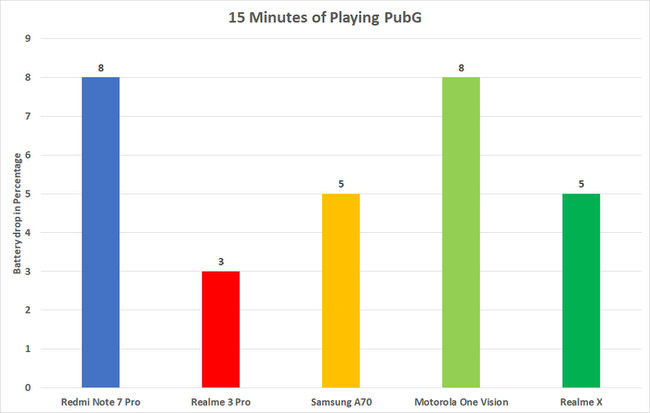 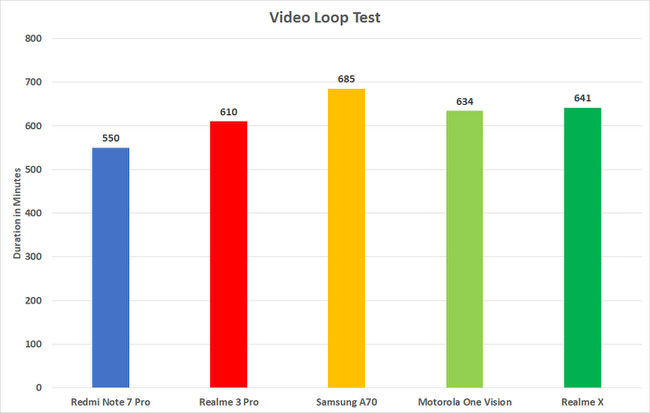 In regular usage, the phone’s battery was easily lasting us a day and a half of heavy usage. This involves plenty of conversations over WhatsApp, streaming an episode or two over Netflix and playing music over Bluetooth for a good 3-4 hours. This, topped up with an hour or so worth of phone calls, suffice to say, the battery life has left us impressed.

Featuring a 6.5 inch AMOLED display, the Realme X has a completely notch-free front, with a near-bezel-less look. However, that’s not what impressed us. What really caught us off guard was the display’s peak brightness, which hit 752 lux in the center of the screen and almost 800 lux towards the bottom. These numbers are some of the highest we have ever recorded, beating that of even some flagship phones. The result, is a display that works brilliantly outdoors, being bright enough for practically everything. The only thing we worry about is an OTA update from Realme that would lower the peak brightness in the name of “battery optimization.”  We will keep an eye on this, and update our review if this was to occur, but for now, we’re happy with what we’re seeing. 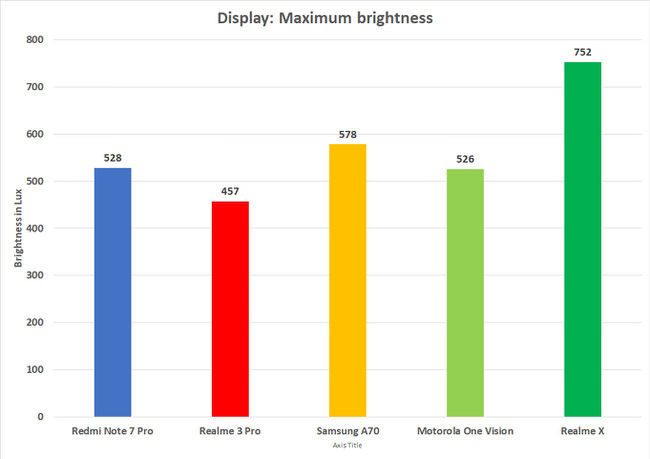 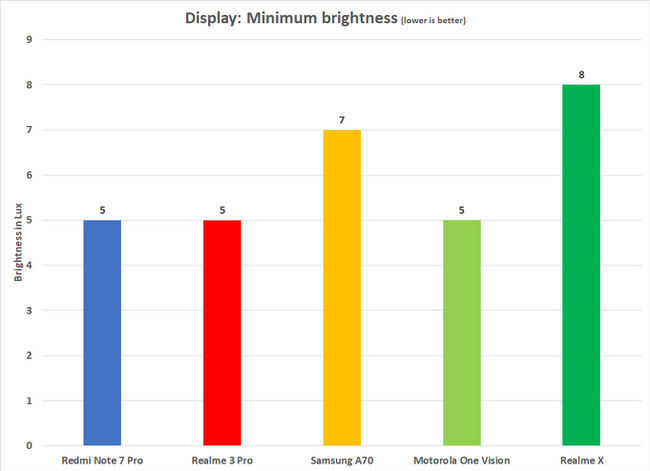 Realme X has a slightly higher minimum brightness than we'd like

When it comes to minimum brightness, the AMOLED panel bottoms out at 8 lux, which is somewhat brighter than we would have liked. The phone is still usable in the dark but expect a few heads to turn in case you pull this out in a theater.

The design of the phone is another strong suite, but the construction left us wanting more. The back has this pearl white finish, where you see multiple shades of colour depending on how light passes over it. The finish looks really nice, but once you hold the phone, it feels hollow, somewhat like plastic. The frame that tucks the front and back panels feels solid, and that’s because its solid metal. The dual SIM tray is on the right side of the frame, given away only by the little hole for the ejector tool. The top fo the frame houses the pop-up camera while the bottom side will be where you’ll find the type-C port along with the single speaker. While the design of the Realme X is definitely an eye pleaser, we feel the build quality could have been better, especially  seeing how the phone is not only thicker, but also heavier in comparison to its equally well built predecessor, the Realme 3 Pro. 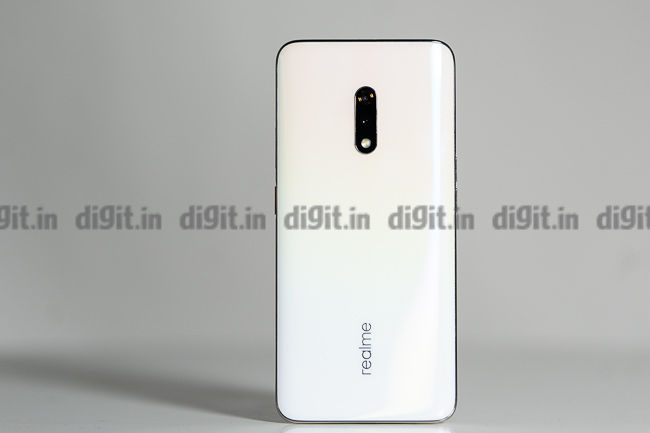 Realme X has a nice finish to the back 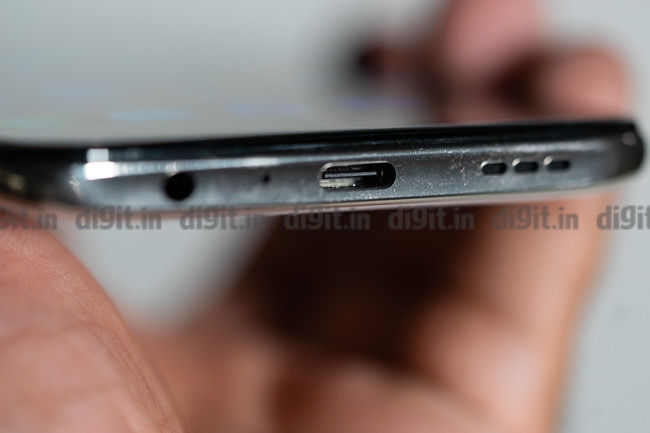 Realme X sports a USB-C port and 3.5mm headphone jack at the bottom

Buy the Realme X for its display, for its ability to handle gaming better than its competitors and for its battery life. We will not pass judgement on the OS except to say that yes, it is a fluid experience. While in terms of pure CPU compute, the Snapdragon 710 trails behind the SD 675, but the GPU on the 710 more than makes up for it. Overall, you won’t find the performance of this phone to be a point of complaint. What you may at times feel underwhelming is the imaging capabilities in low light. Honestly, there’s no one area where the Realme X falls flat on its face, making this a phone that’s hard not to recommend.