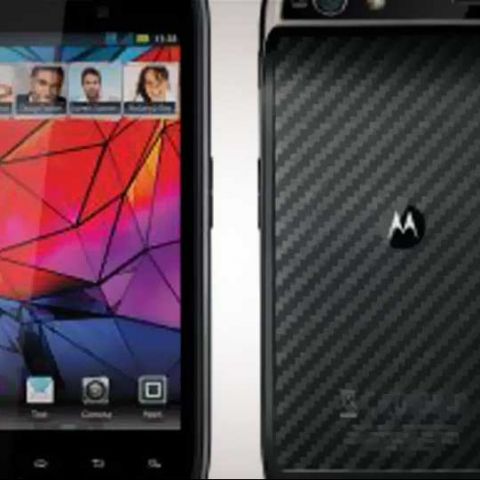 Without doubt, the new Razr looks absolutely fantastic. Manages to pack in a lot of power in what Motorola calls "the world's slimmest phone". While it isn't bullet proof, you can still boast about the Kevlar layer on the rear panel! The only thing we say going against it is the price, when up against the likes of the Samsung Galaxy SII and the HTC Sensation, all offering similar performance. Maybe itï¿½s the looks!

While Motorola calls this the slimmest phone in the world, it actually isn't strictly true. While the Motorola Razr is slim for the most part, it does thicken up considerably towards the top where the 8MP camera and the speakerphone sit. However, you won’t really be touching that part at all while using the phone, and the 7.1mm thickness should feel quite thin!

Look & Feel
We have already gotten through the point that the Motorola Razr is a very slim phone, for most purposes. However, while it is slim, there is a problem that we hadn’t envisaged - the phone feels too big! While it is a 4.3-inch display - same as the HTC Sensation XE and the Samsung Galaxy SII, the bezel around the display makes it the thickest among all three. And is the tallest when standing vertically.

Below the display are four touch sensitive keys - Options, Home, Return and Search. You can hardly see the 1.3MP video chat camera above the display, hidden away nicely in the dark coloured bezel. On the top spine is the 3.5mm headphone jack, the micro USB port and the mini HDMI out. The right spine has the power key (silver in colour) and the volume rocker below it. Since the battery bay isn't accessible, Motorola has allowed access to the SIM card slot and the microSD card slot on the left spine. There are two problems here, though. First, the flap that opens to allow access to these two slots is quite flimsy. It is the only plasticky bit on this phone, and while the rest of the phone is extremely classily built, this just feels very cheap. And it doesn’t stay down while you are inserting the SIM or the memory card - has to be held down with a finger during the entire process. Secondly, the review unit that we received did not indicate how the micro SIM card is supposed to go in - connectors at the bottom or the connectors at the top. We learnt it the hard way when we slid it in with the connectors (golden coloured bit) facing downward, while it was supposed to go in the other way round.

Flip the phone over and what you may think at first glance isn't really carbon fiber. Instead, Motorola have gone one better and put a layer of Kevlar on it. While it isn't bullet proof, it does lend a considerable amount of solidity. The nanotechnology coating makes it splash resistant. It will handle the odd splash and the water will just slide off the surface like it would on any well-polished surface. However, it shouldn’t be mistaken for being water-proof and dipped in the pool!

Features & Performance
Speaking of the display, the super AMOLED one on the Motorola Razr is an absolute delight to use. It has the same qHD resolution as the display on the HTC Sensation XE - 540x960 pixels, and is more than the Galaxy SII - 480x800 pixels, but feels significantly better than the other two in terms of how it handles colours. However, we are a tad but surprised to see the same experience not transfer to the experience of watching videos. The Motorola Razr’s display offers excellent text crispness. Reading web pages, even when not zoomed in a lot, is a comfortable experience. The touchscreen precision is something that is very good as well. This is very useful when selecting a link on a web page, and not being forced to press the back key once you realize the option adjacent to the one you wanted to select got selected!

The Motorola Razr ships with Android 2.3.5 and an updated version of the MotoBlur UI. There are 5 customizable home screens. No matter what home screen you are in, press the home key twice and all 5 line up on the display. On the lock screen, you swipe left to right to unlock the phone, and swipe right to left to head straight for the camera. In the middle is the slider letting you switch between silent and normal sound profiles. Looks quite neat, but lacks the customizability options that HTC provides with the lock screens on the HTC Sense UI. You can place widgets across all 5 home screens, but the widgets have a boxy feel to them. All of them have very straight sharp edges, and a similar design. It gave us the idea that someone who wouldn’t wear anything less than a nicely pressed shirt and a crisp suit the entire day have probably designed them! Having said that, we must say that the functionality and the UI impact aren’t lost at all.

The Smart Actions app is a mighty useful application to have. The idea is to automate a whole lot of features, with just one click. For example, set up a rule for Nighttime Battery Saver, and you can set it to turn display off, charging settings, motion detection for display on/of and turn o/off features like Wi-Fi, cellular data etc. You can even set this app to send a text message to someone when one particular rule is deployed. There are a whole host of preset rules that you can modify and implement - home, car, office etc., or can create your own. The real benefit of this will be on the battery time - turn off features automatically when the battery reached a particularly low level of charge, and it will last longer.

Coming back to the display, because we will talk about multimedia playback here! We were watching a couple of episodes of BBC Top Gear on the Razr, with one being the Top Gear India Special. While the video playback performance is good, you can’t really help but notice that the colour depth so visible on this display throughout is mysteriously toned down here. You can always install a third party media player to solve that. The Razr has full-fledged DLNA capabilities, and we streamed content from the phone to the WD Live media player and even the Samsung LED TV connected on the same network.

What is particularly impressive is the quality of the 8MP camera on the Motorola Razr. Having been considerably disappointed with the picture quality on the HTC Sensation XE, the Razr was a breath of fresh air. The pictures had the expected colour richness, and were very crisp. They didn’t look like they had been taken from a phone’s 8MP camera. Both 1080p and 720p HD videos were very smooth, and didn’t have any jerkiness when panning. The Razr doesn’t have video stabilization though (well, even the Sensation XE and Galaxy SII don’t have it), and it shows.

Call quality is absolutely fine on the Motorola Razr. It had good signal reception, proved that it even had 1 bar of signal where the Sensation XE keeps getting 1 bar and losing it.

The Wi-Fi has a bit of an issue though. Switch on the Wi-Fi on the phone, and it will detect the networks automatically. Once connected, notice the number of bars - full. Now, hold the phone with most of the fingers touching the area on the back panel (the one with Kevlar on it, you know!) where the phone’s name, model number, assembled in… is written. The Wi-Fi signal strength drops considerably. Now change the way you grip the phone, and hold it only on the sides with no finger touching the rear panel. No issues with the signal now.

In this trio, the Motorola Razr and the Samsung Galaxy SII come with 1.2GHz processors while the Sensation XE has a 1.5GHz one. All have different chipsets and graphics solutions though. In our benchmark tests, the Galaxy SII was ahead in most of the tests. The Sensation XE and the Motorola Razr were somewhat neck and neck. But the extra RAM means that the Razr will handle app load better, and even general file transfers will be slightly swifter. Performance wise, the Motorola Razr is a phone that is a delight to use. Apps open quickly, and we didn’t feel it slowing down even with a bunch of background apps running, and more being downloaded. Some phones tend to slow down during a Bluetooth file transfer, but the Razr didn’t even notice a file was being sent to it!

Battery life is a bit of a disappointment. On the same usage pattern, the Galaxy SII comfortably got through to days, with still a bit of charge left. The Sensation XE gets to two days as well. However, the Razr will be out of charge in just over a day. Yes, all this with Wi-Fi/ 3G running in the background, and mails, social networking and IM apps running in the background.

Our Take
Without doubt, the new Razr looks absolutely fantastic. Manages to pack in a lot of power in what Motorola calls “the world’s slimmest phone”. While it isn’t bullet proof, you can still boast about the Kevlar layer on the rear panel! And can handle a splash of water in its stride as well. The only thing we say going against it is the price, when up against the likes of the Samsung Galaxy SII and the HTC Sensation, all offering similar performance. Maybe it’s the looks. And the Kevlar!