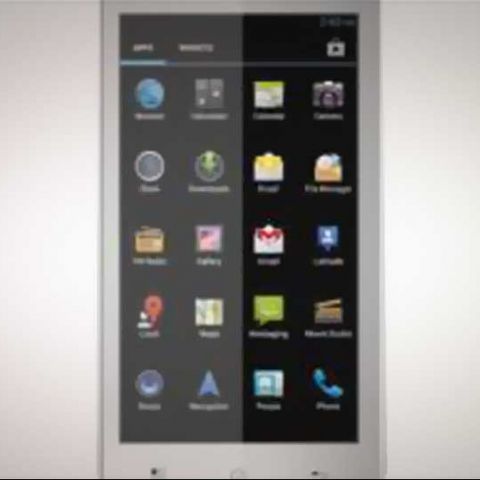 The iBall Andi 4.5h is a much better improvement over the iBall Andi 5c. The high-res screen, dual-core processor, 8MP camera, 1 GB of RAM are impressive specifications. When clubbed with a good build quality, a decent battery life and a sweet pricing of Rs. 12,490 it gives a great bang for the buck. It does come with its fair share of drawbacks but they are overshadowed by the advantages. For those considering budget phablets, this makes for a much better alternative - giving you a 4.5-inch screen and sufficient power with a stock Android experience.

We are seeing a lot of budget 4-inch plus phones in the market. And as most of you will know, we have been plagued with phones having mediocre build quality, poor resolutions and other issues. It seems like smartphone companies have been listening and we are seeing some interesting budget phones in the market which boast of decent mid-range specifications that are seen on most internationally branded phones.

We had seen the iBall Andi 5c in November and we did find it lacking in a lot of departments. The latest iBall phone - the Andi 4.5h - seems to have corrected some of the issues we spoke about. But is this the budget phone to go for? We shall find out soon.

The unit we got was a white-coloured one and it has an all-glass front face. It feels quite snug in the hand thanks to its 4.5-inch diagonal dimensions, as opposed to the 5-inch one seen on the Andi 5c which was quite a handful. The Andi 4.5h lacks a dedicated hardware button and has three capacitive touch keys on the base of the front face. The edges are smooth and there is a hint of chrome at the bottom and top edges. The right hand edge is completely smooth and has no buttons, whereas the volume rocker is present on the left hand side below which there is the microUSB port. On the top edge you have the 3.5mm audio jack on the left and a power/standby button on the right hand side. We liked the placement of the standby button as it is quite easy to access it. The volume rocker and the standby button have nice sharp edges and have a good amount of feedback.

The rear side of the Andi 4.5h is covered by a sturdy plastic cover. While the entire rear side is flat, you will notice a slight protrusion around the 8MP camera. Coming to the front face, there is a dedicated VGA front-facing camera along with the proximity sensor. The capacitive soft keys - home, back and option - are present at the base. The screen is surrounded by a white coloured bezel.

The only issue with the build quality is the opening of the rear cover. The notch is located at a very unusual position and requires quite some force to remove the cover. Also the phone is held in a very dangerous position as you apply pressure to have the cover removed. People like me who do not have nails will have a tough time opening the phone’s rear cover. This is sad since, the cover removal on the Andi 5c was much easier.

The iBall Andi 4.5h has some interesting specifications specially for phones in this price bracket. Here are some: a dual-core 1 GHz Cortex A9 processor, dual-SIM support, 4.5-inch display with an impressive resolution of 960x540 pixels (greater than that seen on the Andi 5c - 800x480 for a 5-inch phone), IPS panel, 8 MP rear camera and 1 GB of RAM. The 4.5h comes with 4 GB of internal storage of which 2.5 GB is usable but you can add a microSD card of upto 32 GB capacity.

It runs on Android 4.0.4 and you get a vanilla Ice Cream Sandwich experience. An addition in the Andi 4.5h that wasn’t present in the Andi 5c is the Personalization option under settings. Using this you can have as many as 8 target apps on the lockscreen. You can even add individual contacts directly onto the lock screen. This option really speeds up a lot of things. There are 5 homescreens, as is seen on most Android 4.0 phones and it offers standard ICS fare in terms of folders, widgets and so on.

It has an IPS panel LCD display. It is scratch-resistant but the same can’t be said about its resistant to smudges. But that is not much of an issue as the smudges are only visible if the screen goes completely dark.

Call quality on the Andi 4.5h is quite good with decent volume levels and optimum sound clarity. We only noticed a couple of call drops while in transit, otherwise the phone works quite well with calls if you are not moving around much. But we did not like the delay in response when you click on the End Call icon. There were a lot of times where we felt the call hadn’t ended and due to multiple presses, ended up dialling a new number after the End Call screen disappeared. We don’t see any point of the phone having to get rid of the calling screen 2-3 seconds after you have clicked on End Call.

The display is one of the best parts about this phone. The screen despite being reflective is still readable under sunlight on adjusting the brightness unlike the iBall Andi 5c which was unreadable under sunlight at any level of brightness. The backlight bleeding which was quite prominent on the Andi 5c is fortunately not as prominent. It’s visible only if you are looking at the phone closely along its plane. While viewing it normally you will not notice any backlight bleeding.
Watching movies on the phone is a pleasure. Blacks aren’t as deep as we would have liked, but it is still a much better display than the Andi 5c. Thanks to the high resolution, text is rendered quite beautifully and we did not have any strain reading long online articles or e-books.

The stock keyboard although decent is quite cramped when compared with the 5-inch phablets. We did end up making a lot of mistakes while typing speedily. Despite installing Swiftkey 3, you do tend to make a lot of mistakes. Your typing speed will surely take a hit and will require some getting used to.

Talking about synthetic benchmarks, the Andi 4.5h aced in quite a lot of tests but was taken over by others in the rest. The MagiconmNote was the only phone that was consistently performing better than the iBall Andi 4.5h, but it’s a 5-inch phablet. The real apples to apples comparison will come when we compare it with the Karbonn A21 which has similar specs. We will update those scores.

The iBall Andi 4.5h has a decent 8MP camera, a 3MP upgrade from the Andi 5c. It also comes with an LED flash. While shooting outdoors, we did not notice any issues with the camera and colours were decently rendered. The major issue, as is the case with most budget phones’ cameras, is autofocus speed. It seems to take ages to lock the focus while indoors and quite a few seconds while outdoors.

For sharing photographs only on mobile devices, the camera is more than enough. The problems arise when you shoot indoors or under low lights. We noticed that the dynamic range of the camera took a major hit while shooting indoors - unnecessarily darkening shadowy areas despite there being sufficient light around the room.

It does offer the option to shoot panorama as well as 3D panorama which gives a perspective-shift kind of effect when seen on the mobile screen. We did not like its video mode at all as it shoots in the 3GP format and there are no options to set the resolution. It only has Low, Medium and High presets. It offers options such as silly faces and backgrounds, which aren’t really impressive thanks to the poor video resolution (640x480).

The bundled earphones are of a mediocre build quality. You will be much better of using third party earphones. The audio coming out of the phone’s speaker is decently loud. Sound - separation in Between the buried and Me’sSelkies and Pink Floyd’s Money wasn’t that great. It is great in the mids which is great for majority of the listeners. It would be foolish to expect the phone’s speaker to shine at the low and high ends of the frequency spectrum as well. But we just wished, the volume levels were louder. Absence of distortion at max volumes is a huge plus in the favour of Andi 4.5h.

Finally coming to battery life, the phone sports a 1600mAh battery which will easily last for around 9-10 hours a day on regular usage (calling, messaging, internet surfing) and around 6 hours on heavy usage (playing back video, heavy gaming). It takes quite a while to charge though which we did not like.

Verdict
The iBall Andi 4.5h is a much better improvement over the iBallAndi 5c. The high-res screen, dual-core processor, 8MP camera, 1 GB of RAM are impressive specifications. When clubbed with a good build quality, a decent battery life and a sweet pricing of Rs. 12,490 it gives a great bang for the buck. It does come with its fair share of drawbacks but they are overshadowed by the advantages. For those considering budget phablets, this makes for a much better alternative - giving you a 4.5-inch screen and sufficient power with a stock Android experience.