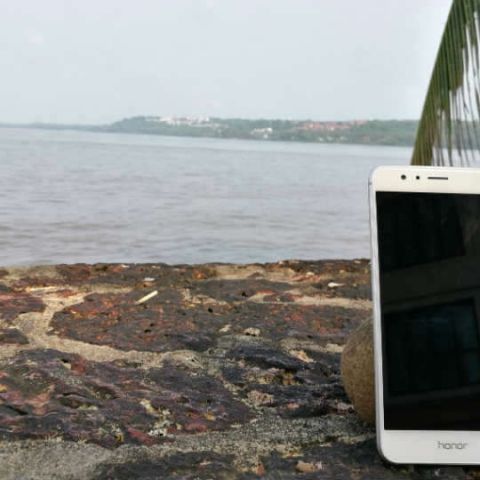 The Honor 8 is a good smartphone on standalone terms. However, the OnePlus 3 (besides being cheaper) outperforms it in almost every aspect. Unless you really want a smartphone with two cameras at the back, the Honor 8 provides little or no exceptional abilities

Huawei is bringing its much appreciated dual-camera spec to the budget Honor brand. The Honor 8 is priced at Rs. 29,999 against the P9’s hefty flagship price tag of Rs. 39,999. The lower price, though, comes with trade-offs.

The Honor 8 boasts the same 12MP Sony IMX286 sensors like the P9, sans the Leica branding. Another difference is the processor — while the P9 has the flagship grade HiSilicon Kirin 955 SoC, the Honor 8 gets the Kirin 950. The rest of the specifications are quite similar, however, the Honor 8 has the formidable OnePlus 3 to argue against. Does it succeed? Here’s the review.

The Honor 8 gets the metal and glass treatment, rather than the seamless and sleek metal casing of the Huawei P9. The front and back of the device are covered with 2.5D glass, while around the sides is a metal frame. The device also has chamfered edges going around the sides, which make the phone quite comfortable to hold. The phone doesn’t dig into my palm when I’m holding it. 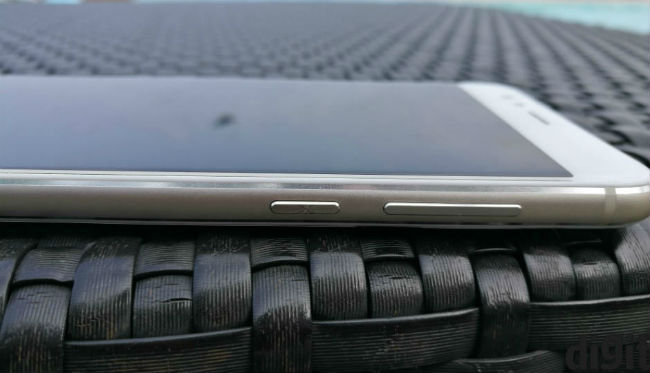 The power and volume rocker are on the right side, while the SIM tray resides on the left. The USB Type-C port, speaker grille and 3.5mm jack are at the bottom, with an IR blaster on the top. The fingerprint sensor is placed on the back, below the camera, and you can customise it to do more than just unlock your phone. 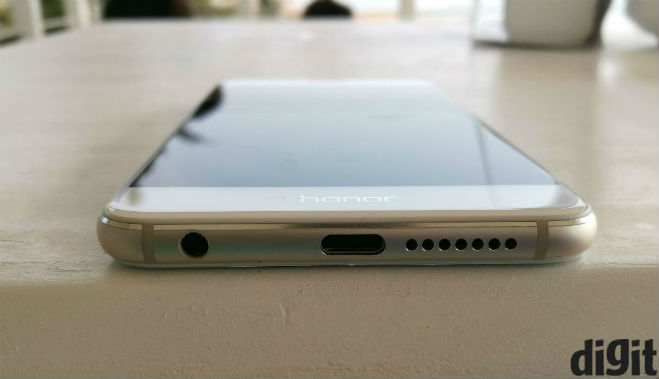 However, with the completely flat glass back on the Honor 8, there is a bit of a problem. The phone tends to slip on inclined surfaces very easily. I have lost count of the number of times I had to grab the phone before it slipped off my cluttered desk. We saw this issue on the Xiaomi Mi 5 as well. You will need a case with this, any way.

Which still works, because the Honor 8 feels quite compact, thanks to the 5.2 inch display and comparatively thin bezels. The phone nestles in your palm and despite being slippery on surfaces, you get a pretty good grip. To be clear, it’s not perfectly suited to single-handed usage, but it’s not in the phablet category either.

The 5.2 inch FHD display is also quite likeable. The colours are not as warm as an AMOLED panel, but they aren’t particularly cool either. The colour tones on the Honor 8 lie somewhere in between the uber warm AMOLED panels and the cooler side of the spectrum. You’ll get deep enough blacks, with reasonably good contrast.

The viewing angles are also fine, with a slight shift in colours when viewing from acute angles. The touch response is quite accurate and the screen is sufficiently bright, at 567 Lux. That said, it’s not as bright as a OnePlus 3, which scores 800 Lux on our tests. 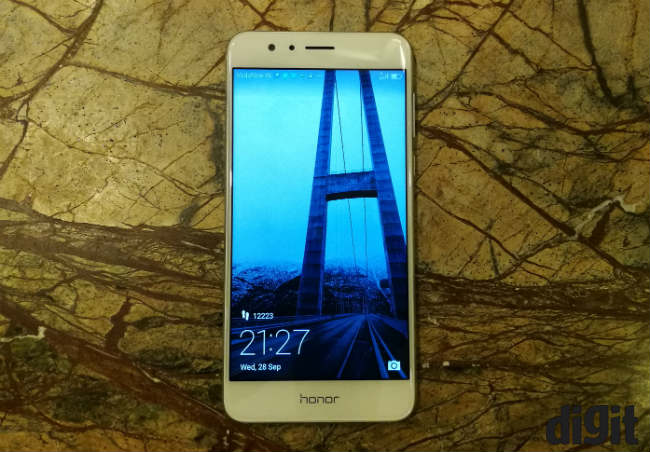 Like the Huawei P9, the Honor 8 also comes with EMUI 4.1, which is based on Android Marshmallow v6.0. This includes a function similar to Apple’s Spotlight Search, but it can be used only to search within the phone. During my time with the phone, I hardly ever used the feature.

Alternatively, Huawei’s UI has no symmetry in the way icons are displayed. Apps like Amazon, Injustice etc. have sharp square designs, while Huawei’s own apps, and some others are somewhat rounded. Together with the lack of an app drawer, this results in a cluttered UI. Despite the presence of Spotlight Search, I don’t like looking at the display because of this clutter.

A feature that I quite liked is called Smart Key, which allows you to customise the fingerprint sensor. You get three input options: single press, double press, and press and hold. While testing, I customised the sensor to turn on the flashlight with a single press, and the camera with a double press, which was pretty useful. It reduces a few taps when turning on the torch, camera etc. It’s a handy feature that many may get used to.

This isn’t Huawei’s first experience with dual-cameras. In fact, the Honor 6 Plus was the first phone to get that honour (no pun intended), and that is the phone the Honor 8 actually replaces in the market today. 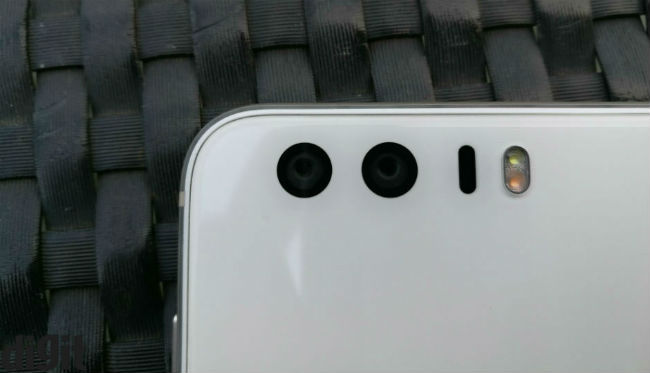 The Honor 8’s camera is the same as the P9 in a lot of ways. It has two 12MP cameras, and they are both Sony IMX286 sensors, like the Huawei P9. However, you do not get Leica’s branding here, which means this phone hasn’t passed Leica’s tests and the results may not be the same. However, like the P9, there’s still a monochrome sensor and a RGB sensor. We have explained how they work in the Huawei P9 review.

In daylight, colours are fairly true to source. Sharpness is well retained, and photographs are not oversaturated. The level of detail is satisfying, and as Honor claims, the Bokeh mode does fairly well at creating shallow depth of field. This is further aided by fast focusing, which helps in selecting the right point of focus. Contrast levels are optimum, and all of these factors taken together make the Honor 8 a fairly decent shooter.

However, it is not revolutionary and the image quality rendered by the OnePlus 3 is superior to the Honor 8. Further, in our dual-camera comparison between the Honor 8, Huawei P9 and the Apple iPhone 7 Plus, the iPhone creates softer Bokeh, which makes for a more distinct foreground. The details, colours and other image attributes are also superior on the iPhone, with the Huawei P9 following suit.

In environments with higher colour temperature and low-light, the Honor 8 does fare better than competing phones like the Xiaomi Mi 5. While there is distinctly noticeable noise in photographs, colours remain close to their original tone. The noise also appears finer, which leaves room for post processing. Images are softened because of the noise reduction algorithms, but are still fairly usable. Here too, the iPhone 7 Plus, OnePlus 3 and the P9 are superior to the Honor 8.

However, it is to be noted that except for the OnePlus 3, the other smartphones are considerably more expensive. The Honor 8 also features dual-cameras, which allows it to produce better blurred backgrounds than the OnePlus 3. Considering only the image quality, the OnePlus 3 is distinctly superior, but the two cameras do give the Honor 8 a unique edge. Interestingly, we tried using Snapseed on photos from the OnePlus 3 and got quite close to the Honor 8’s images.

OnePlus 3 with Snapseed filter on the left, Honor 8's Wide Aperture Mode on the right

Since this is a camera-centric phone, you obviously get a bunch of features and modes to play with. There is a pro-mode that gives you manual controls over the camera, including ISO, shutter speed, white balance, exposure as well as the focus. The Light Painting mode allows you to take photos with long exposure. Of course, you’ll need to hold the phone steady while taking these shots. Frankly, I found the mode to be useless, since images will almost always come shaky when you try to hold a phone steady for 9-10 seconds. A notable omission are the Leica film modes, which we saw on the P9.

As with many devices by Huawei, the Honor 8 sports the company’s own HiSilicon Kirin SoC, which in this case is the octa-core Kirin 950. Unlike the Kirin 955, which is found on the Huawei P9, the maximum clock speed is 2.3GHz, as compared to 2.5GHz. However, the cluster configuration is quite similar. There are four high performance Cortex A72 cores clocked at 2.3GHz, and four Cortex A53 cores clocked at 1.8GHz. There is also 4GB of RAM, which is more than what you get on the Huawei P9 (3GB).

Gaming on the Honor 8 was not a major issue and most performance intensive games like Injustice or Asphalt 8 run smooth enough. There are minor frame skips, though, which you won’t find on a OnePlus 3. The phone is about 35% less powerful than the OnePlus 3. In fact, the Kirin 950’s performance is nearer to a Snapdragon 652 than the Snapdragon 820. More importantly, there is a heating problem, which further pulls the performance down. 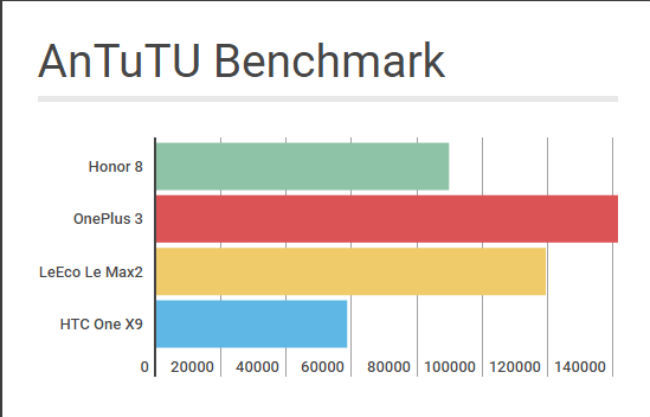 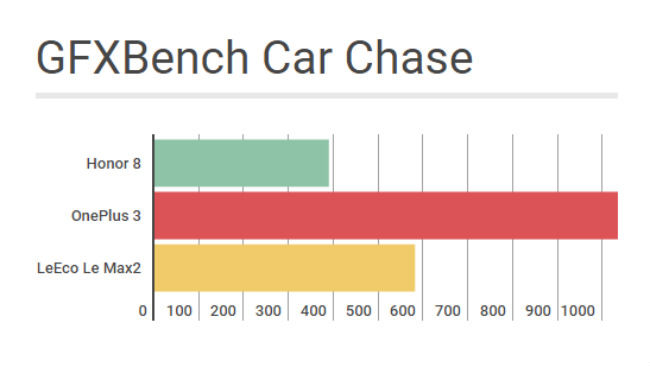 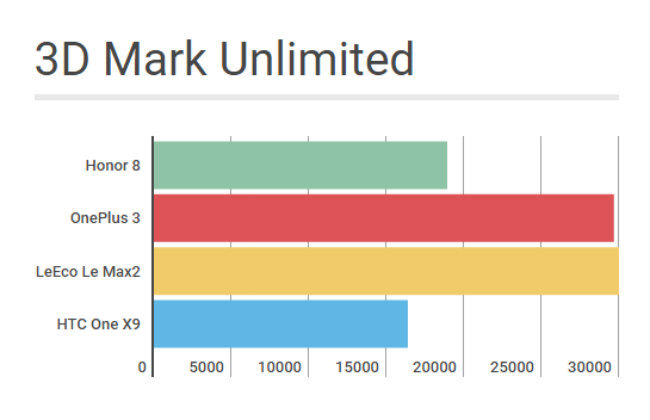 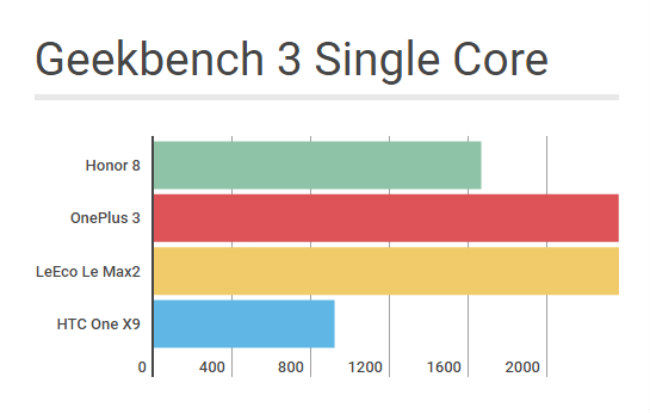 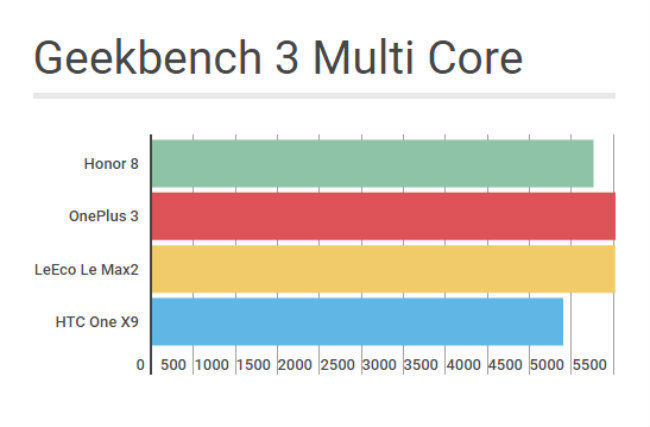 Within about 5 minutes of playing Asphalt 8 on the phone, the temperature went up to about 40-degrees. At the end of 15 minutes, with me continually playing the game, it went up to 42-degrees. Immediately afterwards, we ran 3D Mark’s Slingshot Test non-stop for another 15 minutes. By the end of it, the temperature went back down to about 40-degrees, but the CPU was visibly throttled at this point.

The Honor 8 shuts down its high performance cores whenever the temperature nears 40 degrees, which happens quite easily. As a result, you will get a visibly throttled SoC and the phone can’t perform at its peak for long. Also, the excessive heating may be harmful for the phone in the long run as well.

The Honor 8 comes with a 3000mAh battery and is just about enough for an average work day, which includes some gaming, calling, texting and taking pictures. However, I would still recommend carrying a power bank with you just in case. The phone lasted for 5 hours and 33 minutes on the PC Mark test, which is a lower than average.

However, as I mentioned earlier, there is a good battery manager option within the device, which gives you three preset power plans to choose from. By default, the Smart option is enabled, which offers balanced performance. The Performance mode is designed for intensive usage such as gaming and performance is increased at the cost of battery life. There is also an Ultra Power Saving Mode, which only keeps basic calling and messaging features while turning off the rest, thereby increasing battery life dramatically. There is also another feature called ROG power saving which lowers the screen resolution to 720p, which increases battery life even further.

The Honor 8 is a decent smartphone on standalone terms, and may have even been a good device to consider had it not been for the OnePlus 3. It is outperformed in almost every aspect by that device and unless you really want a smartphone with two cameras at the back, the Honor 8 provides little or no exceptional abilities. Also, it costs more than the OnePlus 3.

The OnePlus 3 is the obvious recommendation, and the dual-camera setup on the Honor 8 is actually more gimmicky than practical. Go for it, only if a dual camera smartphone is your utmost priority.