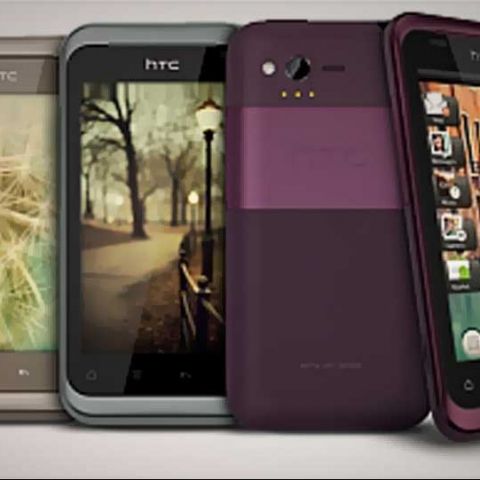 In a day and age where we have dual-core smartphones ruling to roost, it's a little hard to recommend a single-core smartphone. It's not like the device is bad. The camera has some nice effects. Apps run smoothly until you start some heavy multitasking. The Sense 3.5 is one of the best skins to overlay the Android OS and the fact that the Rhyme is expected to receive the ICS update soon makes it future proof. But if you are in the market to pick up a device close to the Rs. 25,000 mark, we suggest that you take a look at the Sony Ericsson Xperia Arc S, HTC Sensation or the Nokia Lumia 800 before making your buying decision.

Smartphones today have become more of a style statement along with housing some impressive power under the hood. We have devices like the iPhone 4S, Samsung Galaxy S2 and the Motorola Razr that are not only eye catchers with their design, but boast of some amazing power under the hood as well.

Today we have with us the HTC Rhyme. A smartphone that has some really impressive and stylish looks, funky and unique accessories and boasts of a single-core processor in a day and age ruled by the dual-core. Are looks and feature enough to distinguish this device from the crowd, or has it fallen short of performance?

Look and Feel
The device has a candy bar form factor with a look and feel that screams HTC all over the place. The front has a 3.7-inch display with four touch sensitive buttons below it – home, menu, back and search. A lot of handset manufacturers such as Samsung and Sony have foregone the search button in their handsets but its nice to see that HTC has retained it. We think it’s pretty useful.

The rear of the device has a nice plastic finish to it with a metal strip above the removable panel. The rear also houses the 5MP snapper with an LED flash.

The HTC Rhyme comes in two colours – Plum and Clear Water, which are a little unusual but are definite eye catchers.

In terms of connectivity, the device has a 3.5mm headphones jack on the top along with the sleep/wake/on/off button. The right of the device has a volume rocker and the left houses the micro USB port under a flap. The layout is very neat giving the device a unibody look. The lack of a dedicated camera button is missed but it isn’t a deal breaker.

Overall the HTC Rhyme looks stylish and feels solid in our hands.

Features and Performance
With Samsung Galaxy S II and the HTC Sensation family ruling the roost of dual-core smartphones in India, it’s a little disappointing to see the Rhyme with a single-core 1GHz Scorpion processor. For average everyday use the device performs adequately. It does lag a bit if you do some heavy multitasking but the single core processor is good enough to get the job done.

Under the hood, the device has a 1GHz Scorpion processor, 768MB of RAM and 4GB internal storage expandable up to 32GB via MicroSD card.

The device runs on Google Android 2.3.5 skinned with HTC Sense 3.5. HTC says that the device will be upgradable to Android 4.0 Ice Cream Sandwich.

Display
The display on the device is 3.7-inche S-LCD with a resolution of 480x800 pixels. On full brightness the display looks crisp and the colours look vibrant but the contrast ratio feels a bit off. We saw a few YouTube videos, images and used a variety of wallpapers on the device. The screen is impressive but not the best we’ve seen. It doesn’t match the Quality of a Super AMOLED display and is susceptible to a lot of glare under direct sunlight.

The display is a capacitive touchscreen and the response is very good. We played some Angry Birds Space, typed a lot of messages and navigated through a variety of app. The touchscreen doesn’t disappoint.

HTC Sense UI
True to the HTC tradition, we see a version of the Sense UI on the Rhyme as well. The device has HTC Sense 3.5 over Android 2.3.5 Gingerbread. The biggest difference between the Sense UI found on the Sensation family and the one on the Rhyme is the Home Scree Widget (it’s the same we see on the HTC Explorer). The widget occupies one of the seven customizable home screens and gives you quick access to a bunch of features. You have access to your mail, messages, music, camera and the Android market (although the Android market is now called the Google Play Store). It also displays the time along with the day, date and the current weather.

The overall experience of the home screen widget is a nice refreshing change from the one we are used to seeing on the HTC Sensation family.

The rest of the Sense UI experience is the same as any other HTC smartphone. The drop down from the top of the screen gives you quick access to a bunch of settings. You also have the option to customize the home screens with whatever widgets you prefer.

A Glowing Cube?
With the HTC Rhyme you get a little accessory called the Rhyme charm. It looks and serves the purpose of a woman’s jewelry accessory more than anything else. Plug the Rhyme charm into the headphones jack of the smartphone. The phone can be in your bag, pocket or purse. So long as the “charm” is visible to you, it is solving its purpose. And what’s that purpose I hear you ask? Well, if you receive a text message or a call or miss a call, the charm will glow. That’s about it, quite useless if you ask us.

Connectivity and Call Quality
Apart from all the smartphone shenanigan, the HTC Rhyme also performs the functions of a phone. Making calls and sending text messages. The call quality of the handset is very good. The audio is clear and audible at both ends and the sound is crisp. Even in places where we have experienced call drops on other device, the Rhyme held up quite well. The signal strength did fall, but the call didn’t get disconnected.

Camera
The device has a 5MP snapper with the ability to shoot video in 720p. Even though the smartphone has 4GB internal storage, it still requires a microSD card to save the pictures. The images captured from the 5MP camera are good. The camera offers a variety of filters to add different effects to your images such as sepia tones, artificial depth of field so on and so forth. The camera app also lets you add effects and filters once you have clicked a pic. It’s a nice addition and the results are quite satisfying.

The same however cannot be said for the 720p HD recording. The quality of vide is standard when compared to what the competition has to offer but the colours appear a bit dull and video shot in low light conditions appear noisy.

No Battery Access?
HTC has gone the iPhone route with the HTC Rhyme. It has made the battery inaccessible to the user. When you rip out the back cover all you will find is a slot for the SIM card at one end and a place for the microSD card at the other. This is the biggest downer of the HTC Rhyme and if you need to change the battery, you cannot do it yourself.

Battery Life
The battery life on the Rhyme is a little better than what we have come to expect from most smartphones of this day and age. It has a 1600mAh battery that will last you for about two days of moderate use, a little over a day if you push it to its limit. It does have a better battery life than other smartphones in the same category.

Preloaded Apps
The Rhyme comes with the standard preloaded apps we have come to know from HTC. There is friends stream, HTC Hub and apps such as Polaris Office and Usage Monitor which have become standard with the new age HTC Android smartphones. All these apps are handy and useful and don’t feel like bloat ware.

Our Take
In a day and age where we have dual-core smartphones ruling to roost, it’s a little hard to recommend a single-core smartphone. Its not like the device is bad. The camera has some nice effects. Apps run smoothly until you start some heavy multitasking. The Sense 3.5 is one of the best skins to overlay the Android OS and the fact that the Rhyme is expected to receive the ICS update soon makes it future proof. But if you are in the market to pick up a device close to the Rs. 25,000 mark, we suggest that you take a look at the Sony Ericsson Xperia Arc S, HTC Sensation or the Nokia Lumia 800 before making your buying decision.