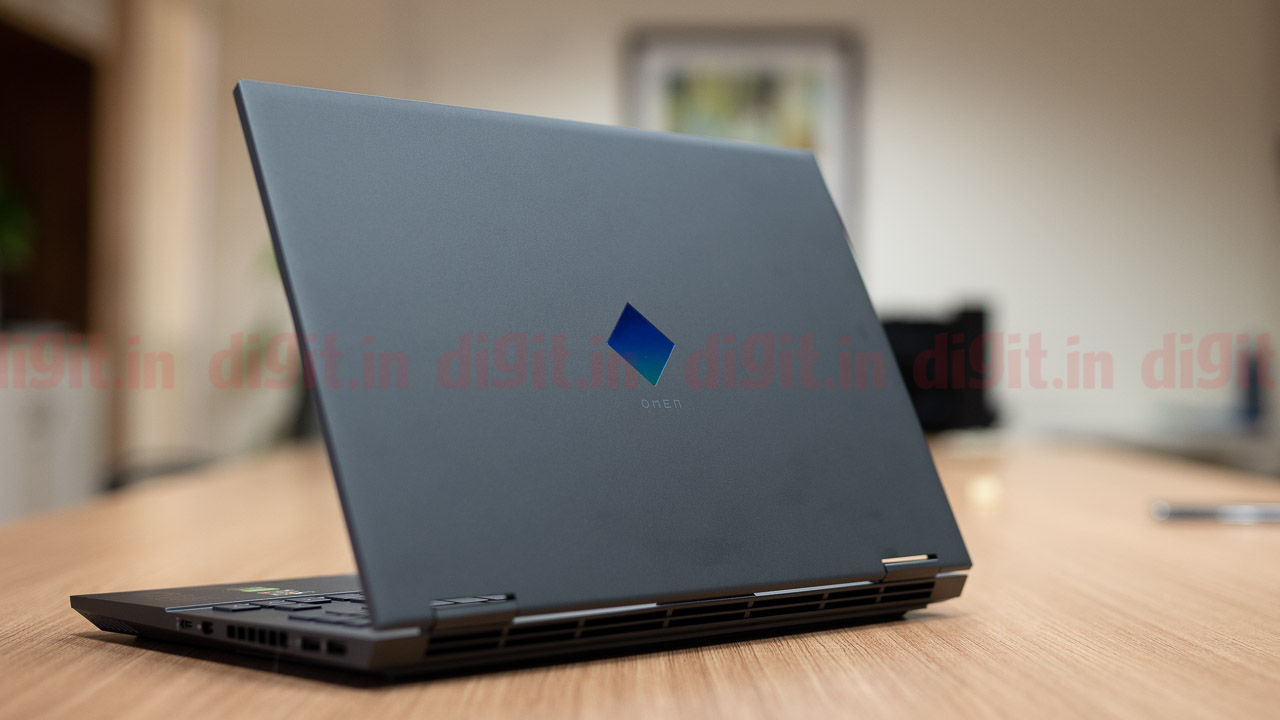 HP has been fairly clear with its messaging this year; Omen is for gaming and Envy for content creators. While the Intel variant still lends itself to content creation in a fairly strong capacity, the Ryzen variant falls flat in all aspects of creative needs. This is partly due to the severely limited amount of RAM on board and a display that isn’t bright enough or capable of reproducing the entire sRGB colour space. However, when it comes to gaming, the Omen 15 does not disappoint. When it comes to thermals, the Omen 15 once again impresses. It offers better upgradability than what you’d get in competing machines, so if you’re looking for a purely gaming machine that can double up as your casual daily driver, consider the Omen 15 Ryzen edition. If you expect more, go for a higher tier variant.

The HP Omen 15 2020 also comes with AMD’s Ryzen 4000 series of processors, although the hardware combination on offer isn’t as diverse as that on the Intel side. We have the Omen 15, powered by the Ryzen 7 4800H octa-core CPU, paired with an Nvidia GTX 1650 Ti. Given that the Intel variant of the Omen did rather well in our testing (Review), we were really keen on seeing how the Ryzen variant would hold up on the same benchmarks. So we set out to test this machine and see what it manages to do well and where it falters. Here are the results.

The Omen 15 that we received from HP has the following specs:

We’ve already reviewed one of the Intel variants of the HP Omen and now, were pretty stoked to be checking out the Ryzen variant as well. The Ryzen 7 4800H is an absolute beast and it feels like it may be a little overpowering for the rest of the components. Regardless, we ran our usual suite of games to see just how the Omen fares. Now, do keep in mind that the display on this thing is limited to 60Hz, so as long as we’re getting 60fps on a game, we’ll be giving the laptop good marks. 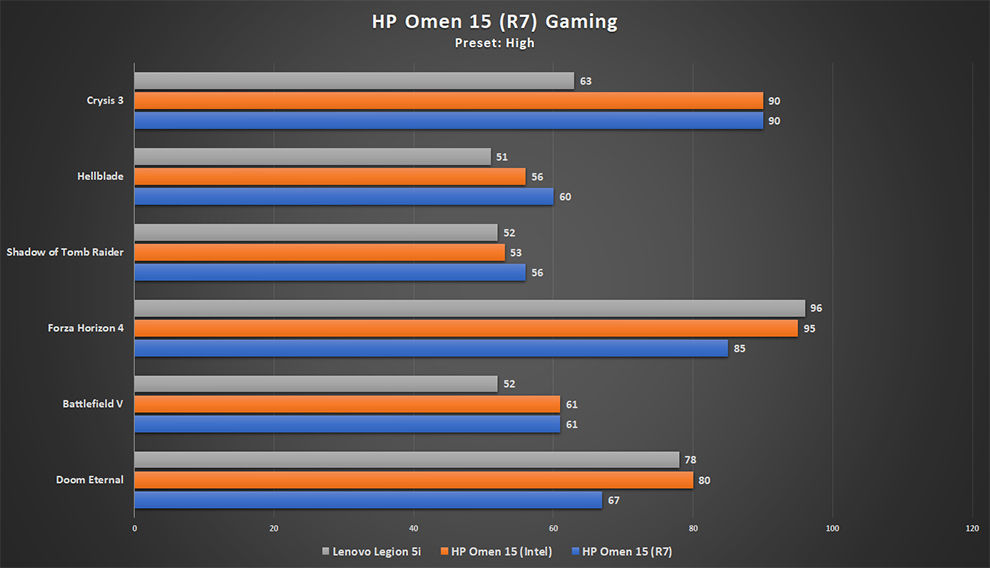 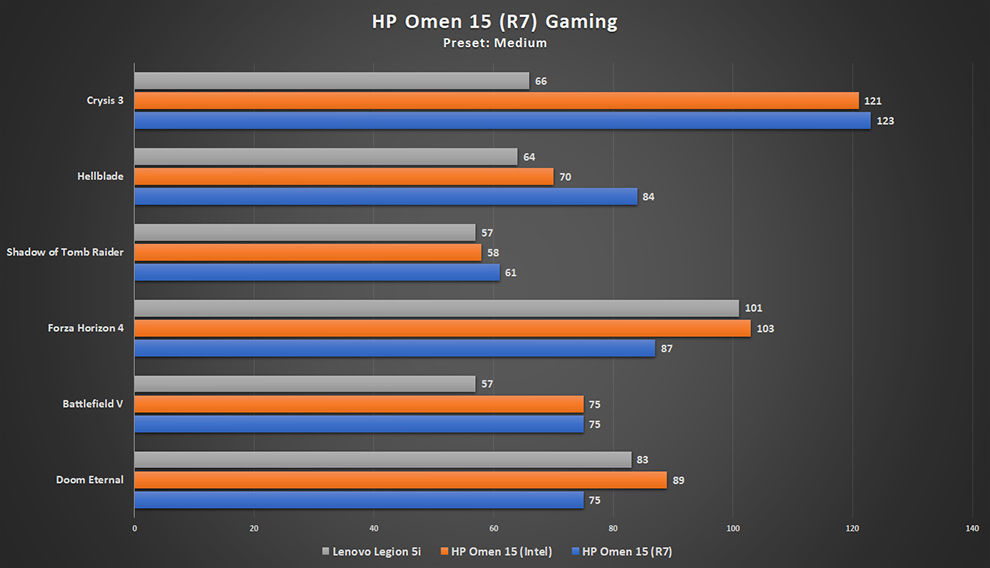 Imagine my surprise when I noted the Omen 15 powered by the Ryzen 7 4800H falter and stumble during our creative workload tests. In both Adobe Lightroom Classic and Premiere Pro render tests, the laptop takes notably longer to finish the task than any laptop we’ve reviewed this year. While neither the CPU nor GPU throttled, what seemed to be the bottleneck throughout the process was the 8GB RAM, which was quickly maxed out by both Lightroom and Premiere. Content creators considering this particular model of the Omen must look at another variant, as the lack of adequate RAM isn’t the only thing holding the machine back. 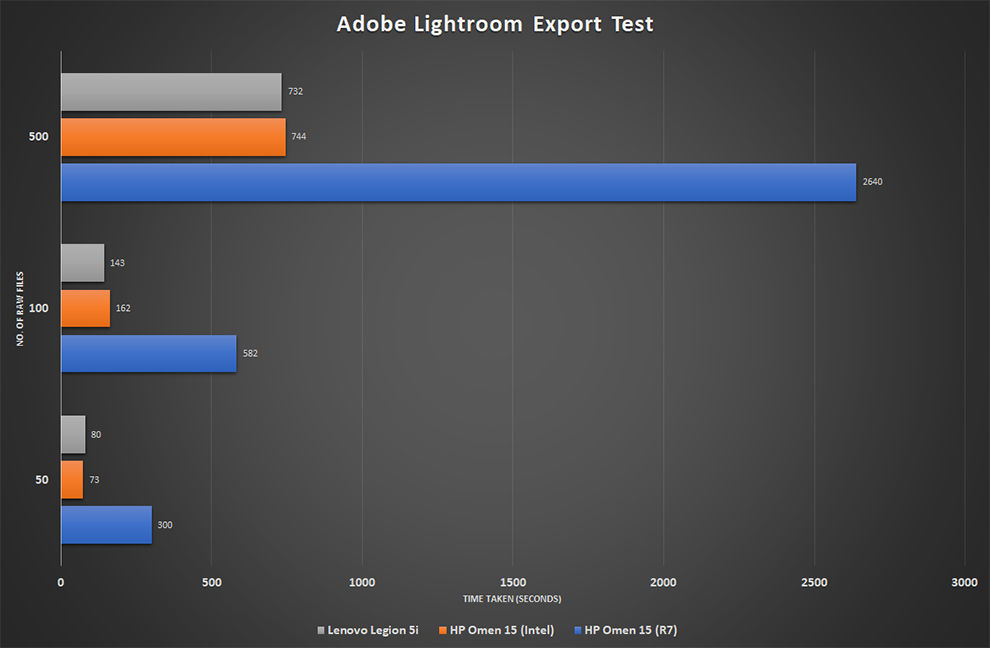 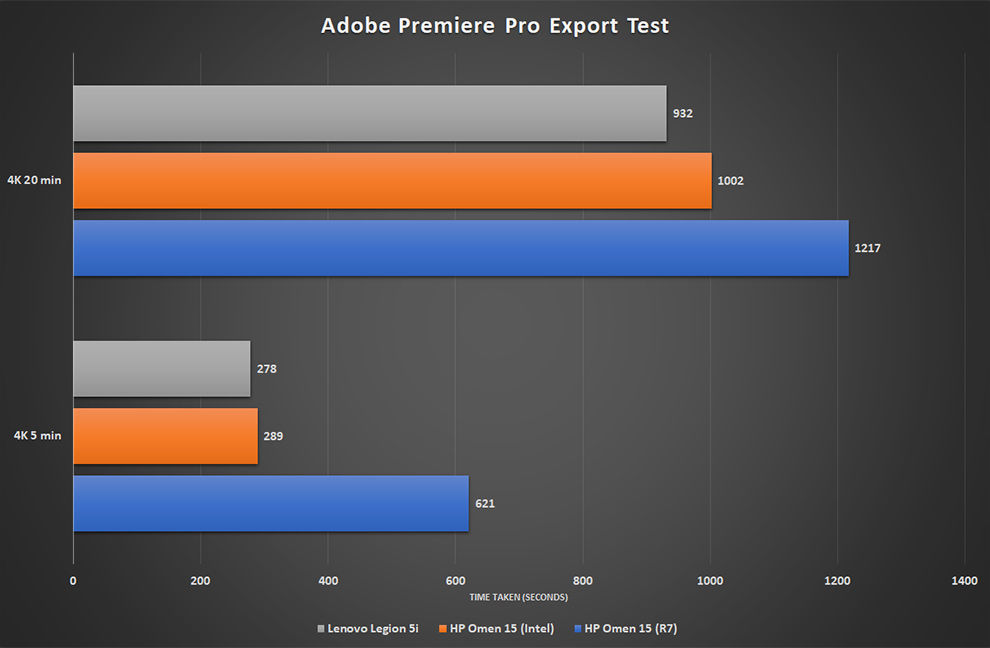 The display on this particular variant of the Omen 15 is somewhat disappointing. For gamers, the refresh rate is limited to just 60Hz, but it’s the creators who will particularly be let down. After analysing the display’s colour reproduction, peak brightness and panel uniformity using the Xrite i1 Display Pro, the only way to sum up this panel is below average. The panel is capable of reproducing barely 60 percent of the entire sRGB colour space, and even after calibration, had some trouble in lining up with the CIE xy representation of sRGB colours. While the greens and reds terminate well before the intended mark, the blues being reproduced by the panel fall outside the sRGB space. The result, is a somewhat dull display. 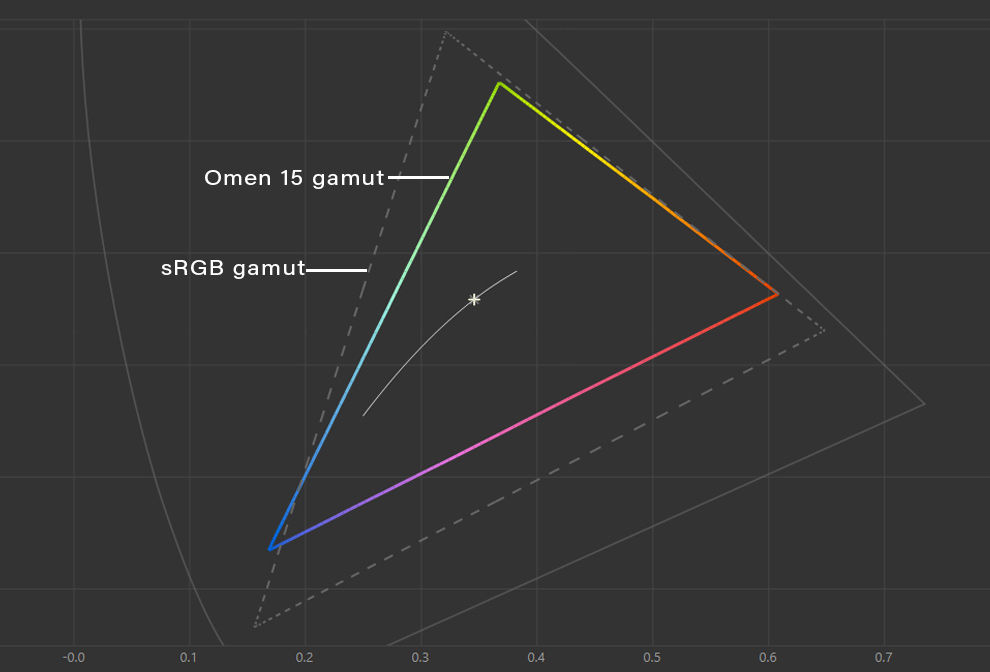 The peak brightness on the display is also nothing to write home about. After taking half a dozen measurements, we concluded that the peak brightness on the HP Omen 15 Ryzen Edition would not go over 155 nits, even after tinkering with settings in the Radeon software. Thankfully, the panel does have fairly consistent uniformity, with contrast deviation falling within the acceptable tolerance. However, the display fails to meet the bare minimum requirement for creators and hence, we would strongly advise you to look at another model of the Omen, one with a different panel. 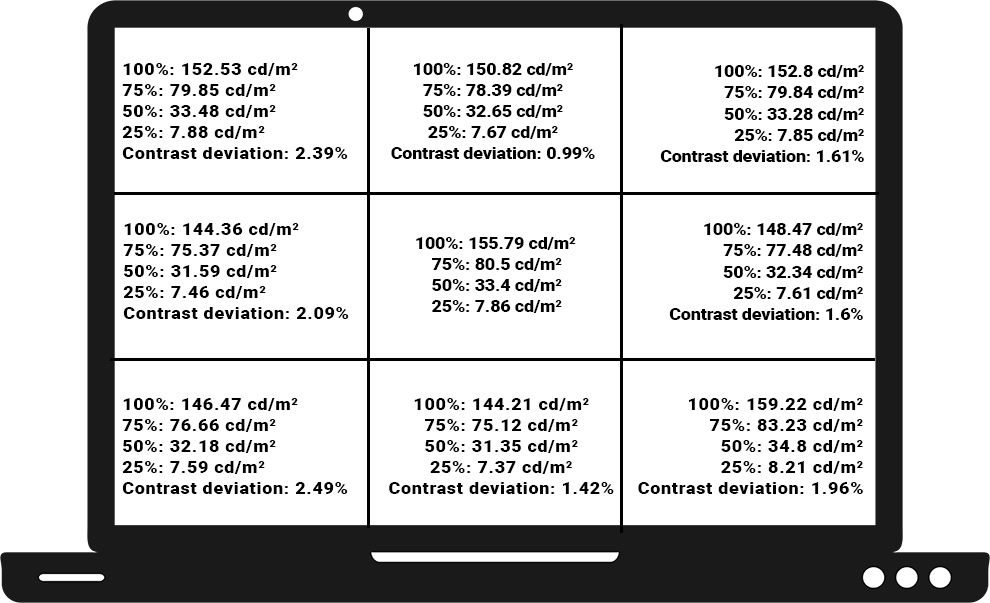 As we noted in our review of the Intel variant of the HP Omen, the company’s new cooling system is quite something. During my testing and normal use, the surface temperatures while gaming did not exceed 38 degrees in the centre of the keyboard. This is just downright crazy. Typically, we’re used to seeing such numbers on the WASD keys of Asus laptops since they have a fan underneath pushing air outwards, but lately even machines like the Zephyrus G14 (Review) have failed to keep thermals in check. HP’s own Envy 15 doesn’t manage to remain cool to the touch either. 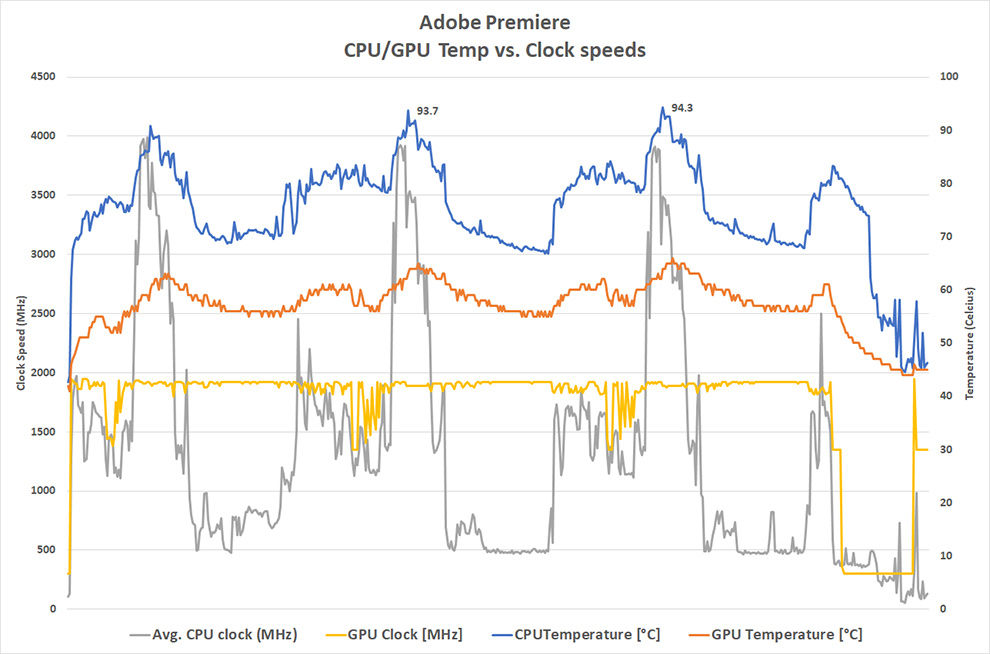 While gaming, we see the CPU hit almost 85 degrees during our gameplay of Doom Eternal and Shadow of the Tomb Raider (at High graphics preset), although during creative workloads, we did see the CPU temps spike into the high 90s, but at no point does the Ryzen 7 4800H with its TjMax of 105-degrees throttle. HP has managed heat really well on this machine and while component wise it may seem like a lower-tier machine, there’s zero compromise on cooling. 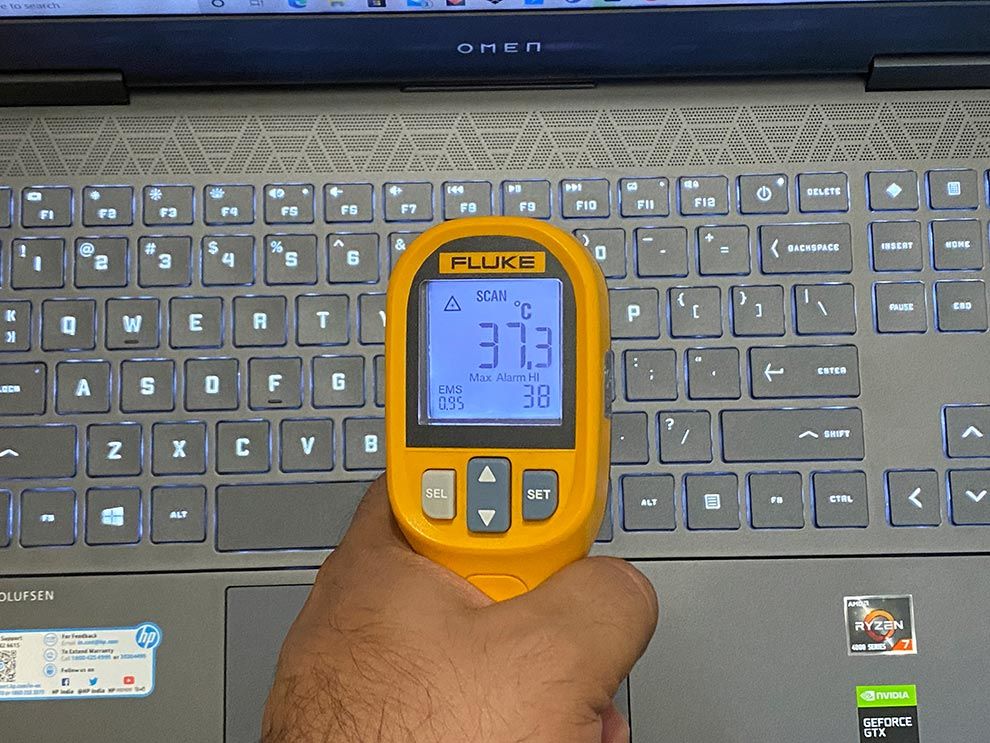 If you’re considering the Omen 15 as a long term machine, you’d be glad to know that HP isn’t short-changing you just because this is a relatively cheaper machine. Pop the bottom lid off (it takes some work) and you’ll be greeted with two m.2 NVMe slots (only one is populated) and two SODIMM slots (again, only one is populated). This means you can add another stick of 8GB DDR4 memory to this to not only get dual-channel, but also more memory on top of having a ton of NVMe storage. 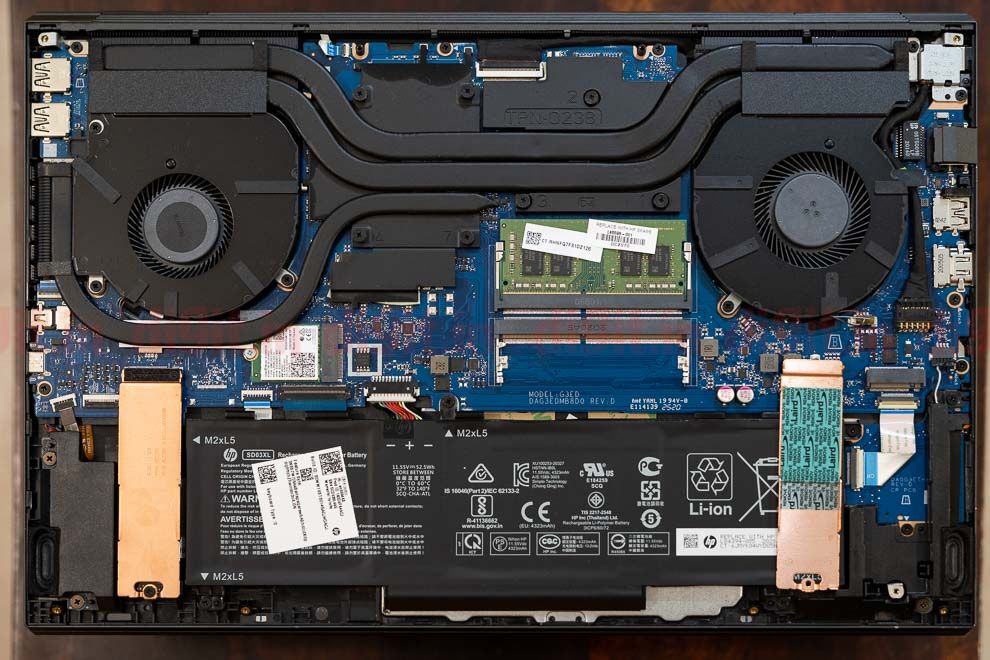 The Omen 15 Ryzen Edition (that’s not its official name) comes with that unique layout we saw in YouTube videos months ago. The Ryzen variant of the Omen does away with the num-pad entirely, allowing the arrow keys and the INS,DEL etc keys to have their own space. I particularly like this as it gives this keyboard a very Ten keyless like feel. Because of the lack of the num-pad, the keys themselves are fairly well spaced out. This is a chiclet style keyboard with adequate travel and somewhat firm keystrokes which inspire confidence while typing.

The trackpad on the Omen is honestly nothing too special to write home about. It’s a standard matte trackpad with a smooth finish and no individual click buttons. Thankfully, the trackpad comes with Windows Precision drivers so it's easier to navigate Windows 10 using the trackpad, but you’ll definitely need an external mouse for gaming. 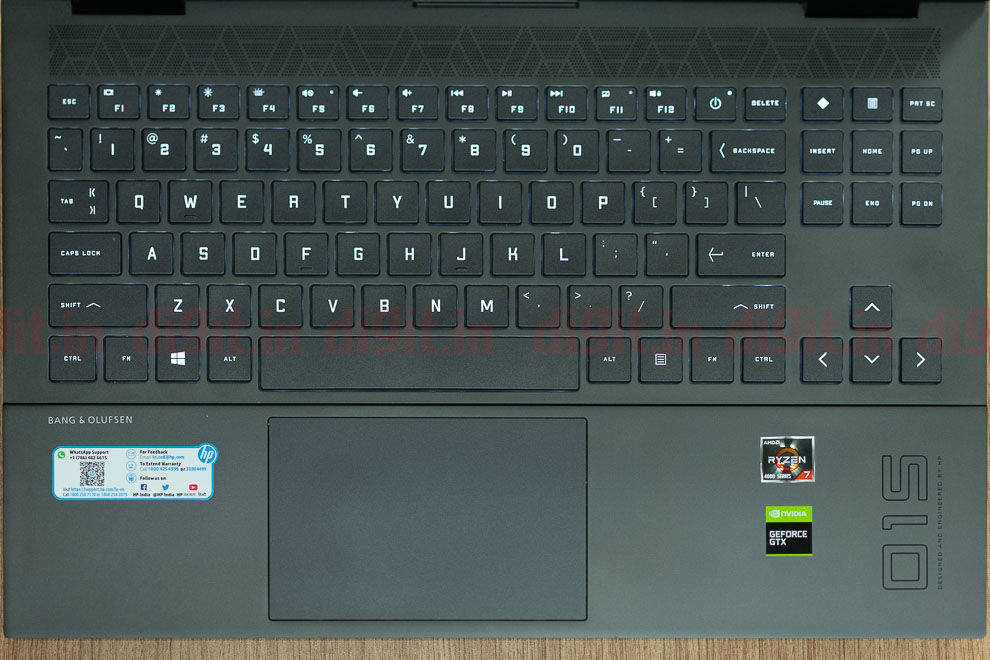 Last but not the least, we have the IO. HP has not compromised in any way on the IO, giving users the whole gamut of all the essentials and more. You get a total of three high speed USB-A ports operating at 5Gbps and an additional USB-C port capable of throughput at  the same 5Gbps speed. Additionally, you also get an Ethernet jack, a full-sized HDMI 2.0a port and a display port. Lastly you have a combined headphone/microphone jack and a full-sized SD card reader.

If you were to pick up the Intel and Ryzen variants of the Omen 15 on either hand, you’d have a hard time telling them apart. The chassis on both is made using the same premium materials, and they both have the same shortcomings. As I noted in my review of the Intel variant, the lid is perhaps the weakest point of the laptop, showing far too much flex and wobble. The lid just doesn’t inspire confidence in its longevity, so for anyone considering this machine, we’d recommend exercising care when opening and closing the lid. 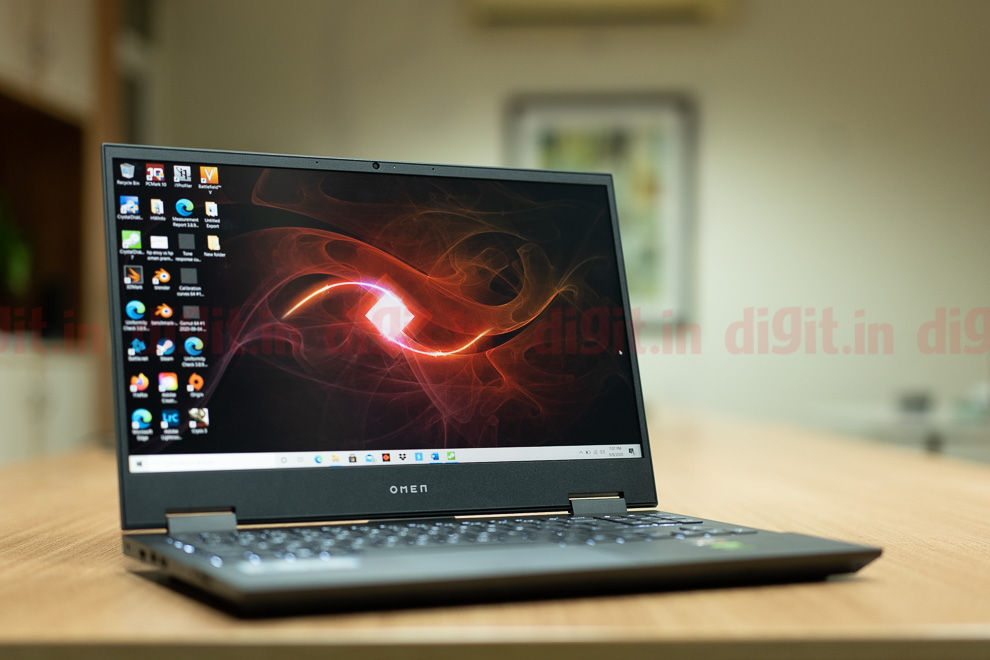 HP has been fairly clear with its messaging this year; Omen is for gaming and Envy for content creators. While the Intel variant still lends itself to content creation in a fairly strong capacity, the Ryzen variant falls flat in all aspects of creative needs. This is partly due to the severely limited amount of RAM on board and a display that isn’t bright enough or capable of reproducing the entire sRGB colour space. However, when it comes to gaming, the Omen 15 does not disappoint. When it comes to thermals, the Omen 15 once again impresses. It offers better upgradability than what you’d get in competing machines, so if you’re looking for a purely gaming machine that can double up as your casual daily driver, consider the Omen 15 Ryzen edition. If you expect more, go for a higher tier variant.