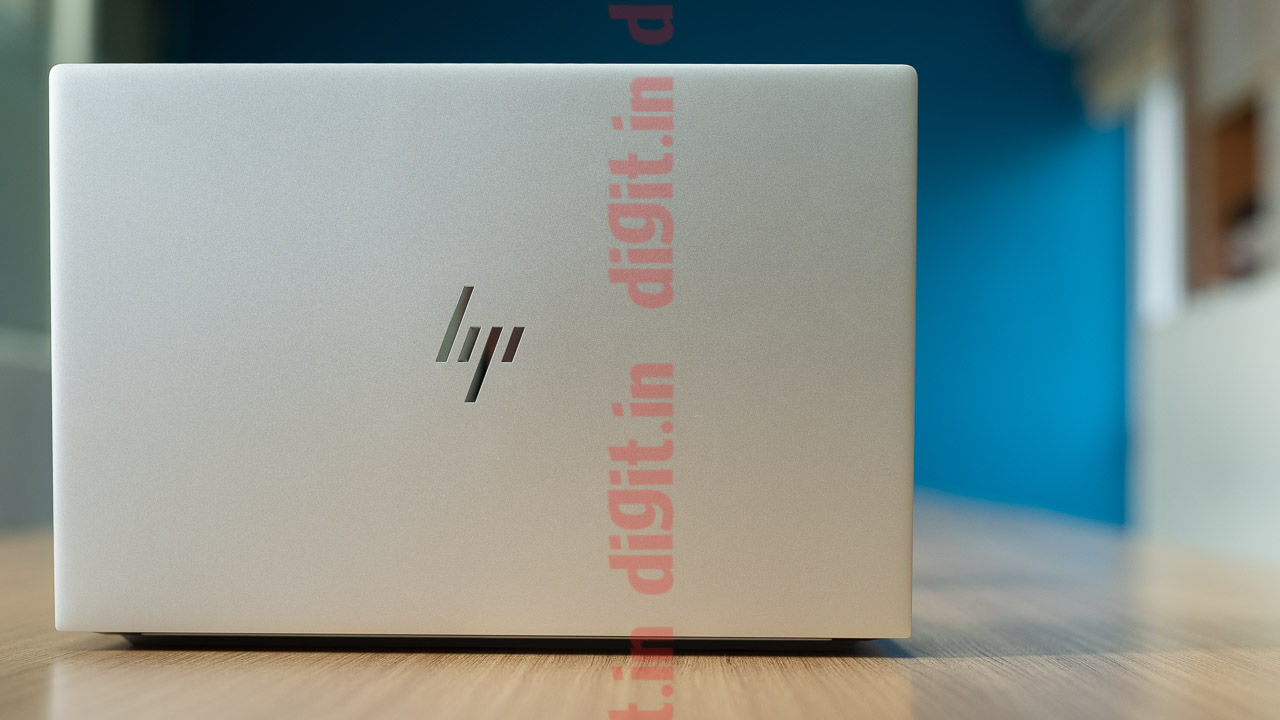 The HP Envy 15 is a sleek looking laptop that's aimed squarely at content creators. Powered by the 10th generation Intel Core i7-10750H processor and an Nvidia GeForce GTX 1660Ti which are both kept cool using a Vapour Chamber cooler. There's also super-fast 1TB NVMe by Samsung and a decent 16GB of DDR4 memory. All this allow the HP Envy to be a solid machine for content creation. You won't be let down irrespective of whether you want to edit on it or use it as a rendering station. The laptop also doubles up as a gaming machine in case you want to blow off some steam. For content creators, the HP Envy offers great performance in a very elegantly designed machine at a price point that is much lower than its competitors.

With content creation starting to occupy more of the occupational landscape today, OEMs are finally starting to see the segment as a standalone business opportunity. Apple’s had this clarity for as long as they’ve had the MacBook Pro lineup, but the PC side of things is just starting to realise that creators have very specific needs, not all of which are met by gaming machines. Asus got on the bandwagon by having the display on many of their gaming machines be “Pantone certified” and Dell pivoted their XPS 15 to be more of a creator laptop than a gaming machine. Now HP is stepping up its game with the Envy 15, having it be tailor-made to cater to the need of those who produce content for a living. The Envy makes a few choices that set it apart from gaming laptops, but at the end of the day, is this the right laptop for content creators or should they look somewhere else?

Our standard testing for creative workloads involves Adobe Lightroom and Adobe Premiere. In addition, we also tested the Envy using DaVinci Resolve, Blender, Apophysis fractal rendering program and Photoshop to see just how the laptop keeps up with these specific workloads. We exported a batch of 50, 100 and 500 RAW files all shot using a Nikon Z7 through Adobe Lightroom Classic. This test w do for all our gaming and creator-centric laptops. In this test, the Envy surprisingly recorded some very slow render times. The HP Omen 15 (Review) that we reviewed recently has the same CPU and a lower-end GPU but still managed to complete the export task much faster. 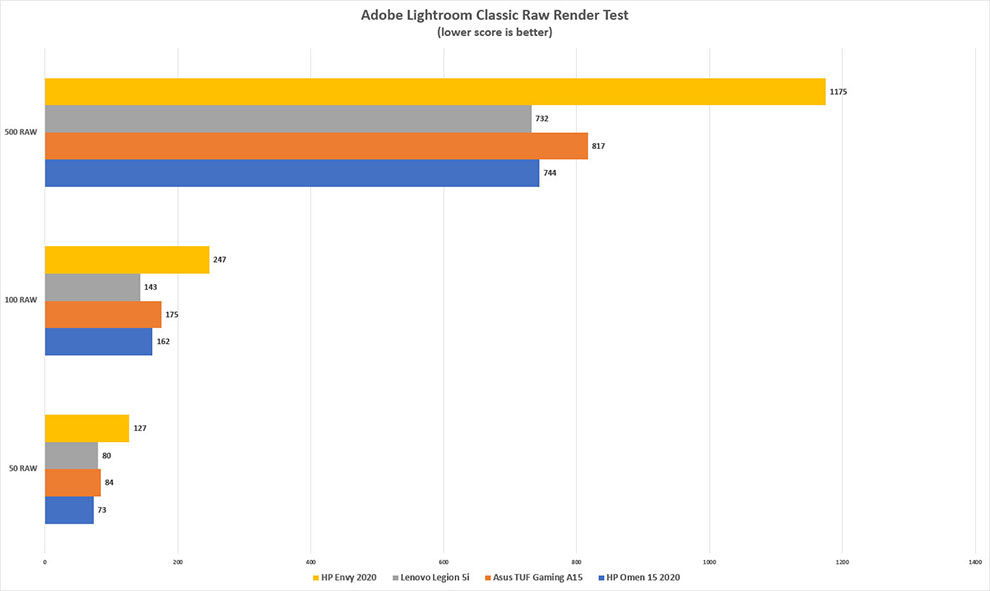 Switching over to Premiere Pro, we see a completely different behaviour. Now Premiere Pro intelligently shifts the loads between the CPU and GPU depending on the matter being rendered. Here, faster renders are also aided by Intel’s QuickSync technology. Here, we noted that the HP Envy does admirably well, recording the fastest render times across all the 10th gen gaming laptops and even the Ryzen 4000 ones we’ve tested. You can see the render times in the chart below. 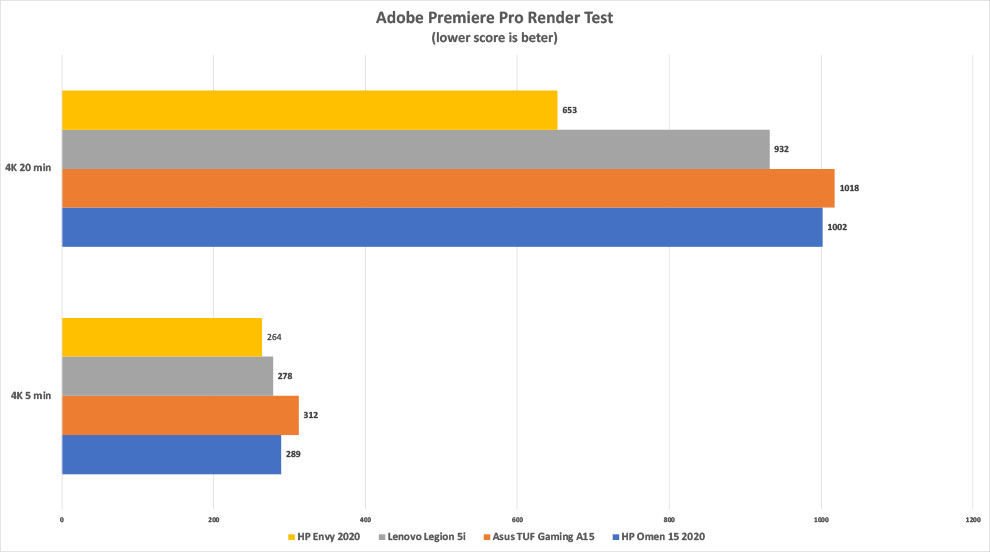 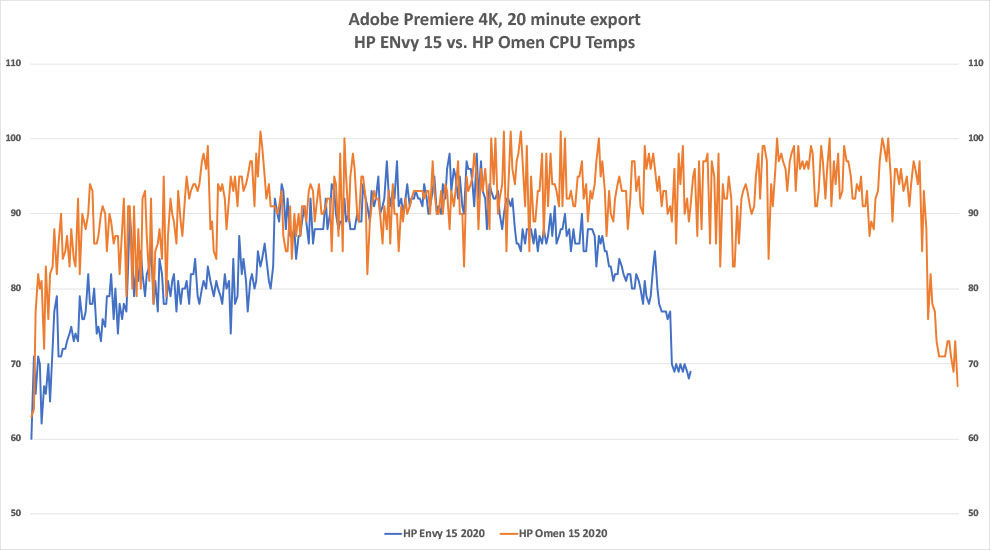 What’s particularly interesting is that the HP Envy trades the traditional copper pipe-based cooling system for a vapour chamber. While running our standard 4K 20-minute timeline export, the Intel Core i7-10750H stays well in the 80s for the most part, spiking into the early 90s only momentarily. The vapour chamber does manage to keep the CPU-GPU well within their respective operating temperatures. We also didn’t find the fans to be too loud even when operating at their max. While the internals maintain a good temperate zone, the surface temperature is a different story. The use of aluminium for the keyboard island allows it to also act as a heat dissipator, hence, you will feel the heat from the inside. You can feel the heat at the centre of the keyboard, which clocked 47-48 degrees while the WASD keys clock 40 degree Celsius. Perhaps the most surprising find was the palm-rest, which we measured to be at 41.5 degrees Celsius. Suffice to say, if you’re gaming on this thing or running a sustained render load, this thing is definitely going to feel hot. 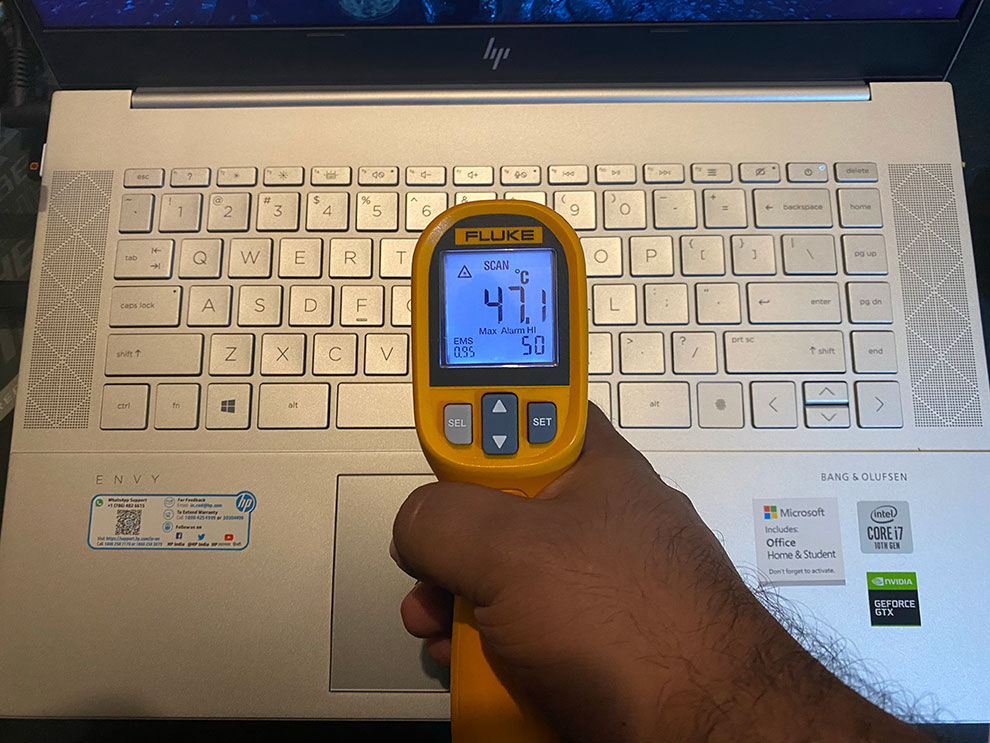 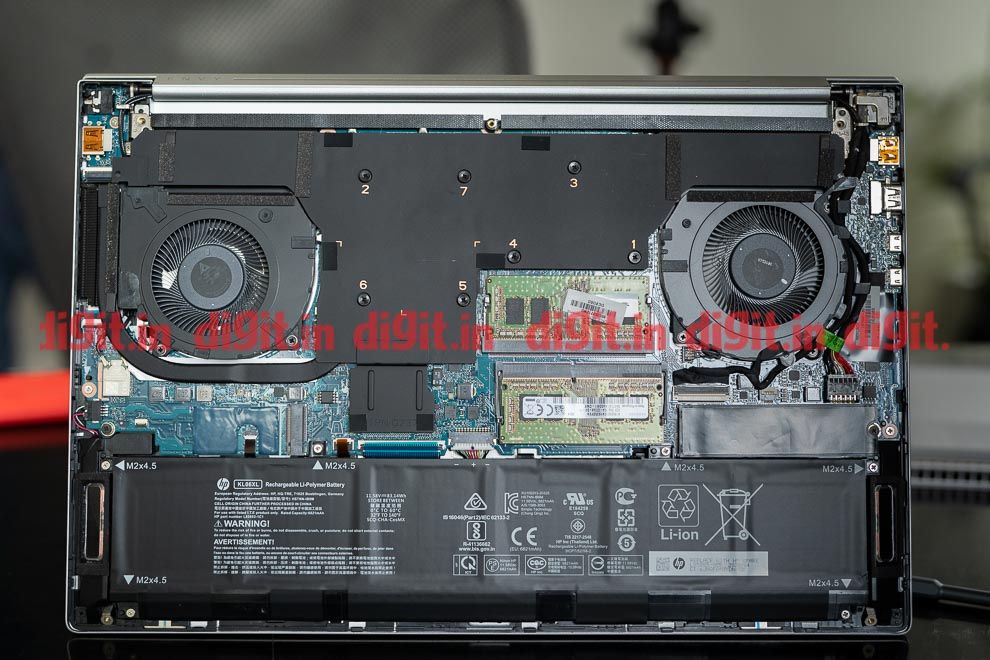 HP is not positioning the Envy 15 as a gaming laptop, but it would be ridiculous to not consider it as one. We ran our standard suite of games on the Envy and found that it actually manages the 60fps mark across most games with their graphics setting set to the High or Medium preset. The Envy sports only a 60Hz display, so we’re more than happy to see games hit that mark. It's smooth and free from any kind of tearing and that’s pretty much all you can hope for. Where the Envy falters as a gaming system is due to the fact that after a few hours of sustained gaming, the surface temperatures do get really hot. Good thing that HP isn’t targeting gamers with this machine. 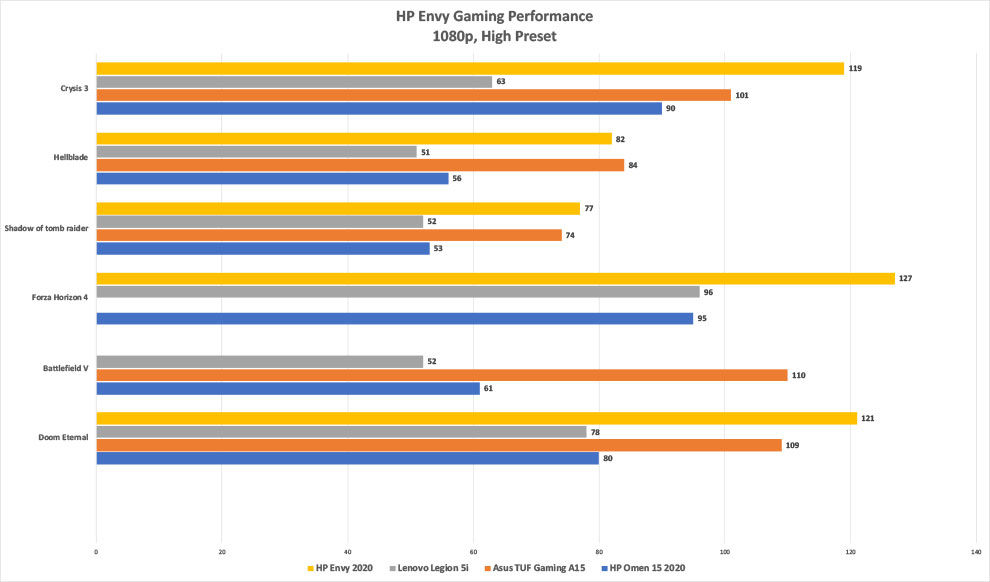 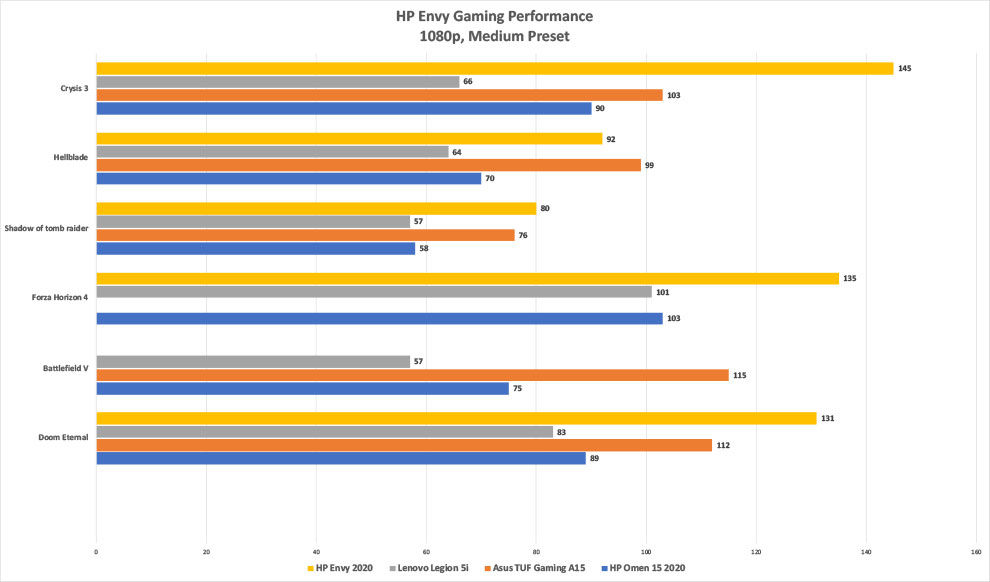 The HP Envy 15 features a nice white backlit chiclet-style keyboard. White backlighting is starting to become very commonplace these days, especially in laptops that have silver keycaps. It's best to keep the backlight turned off during the day and only turn it on while using the laptop in dark environments. The keyboard itself is a treat to use, with generously sized keycaps and decent distance between the keys, it was super easy to get used to. Where the keyboard IS a little weird is that it removes the right CTRL key and puts a fingerprint sensor there. It’s a weird spot for a fingerprint sensor, but it does fit into the scheme of things, at least aesthetically.

The trackpad on this machine is definitely smaller than the one on the Dell XPS 15 and the 16-inch MacBook Pro (Review). Like much smaller. However, you do a get a good trackpad, one with unified clicks and also using Windows Precision drivers. The trackpad is usable for the basic stuff like navigating Windows and even simpler photo and video editing. 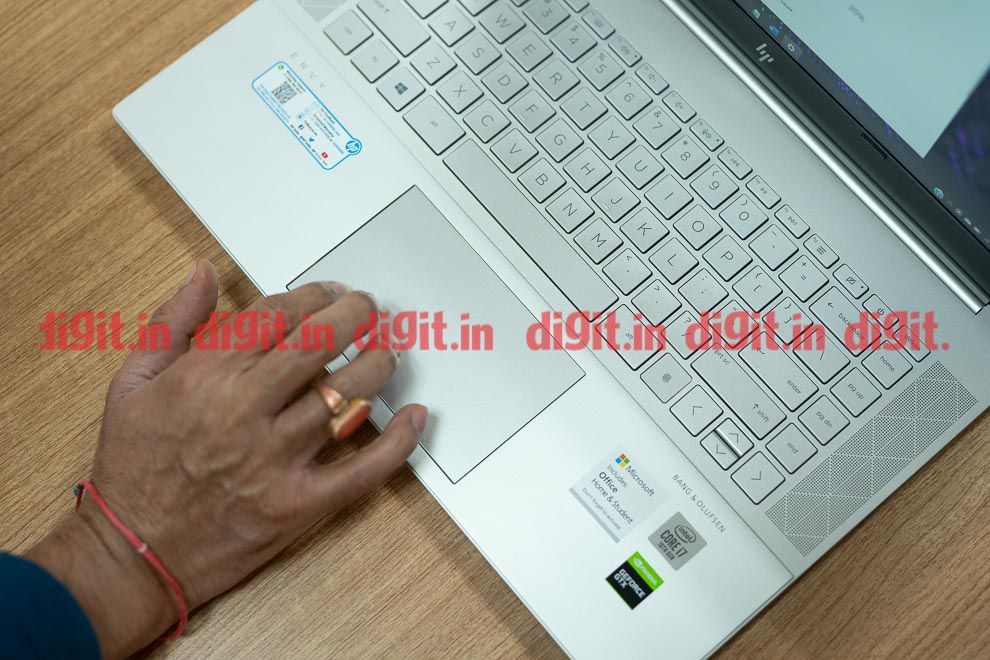 The I/O on the Envy is rather impressive. You get two Thunderbolt 3.0 ports, a full-sized HDMI port and two USB 3.0 ports. For any creator, this should be sufficient enough. While the Thunderbolt 3 ports are great for further expansion, it is sad to see that they do not support PowerDelivery. 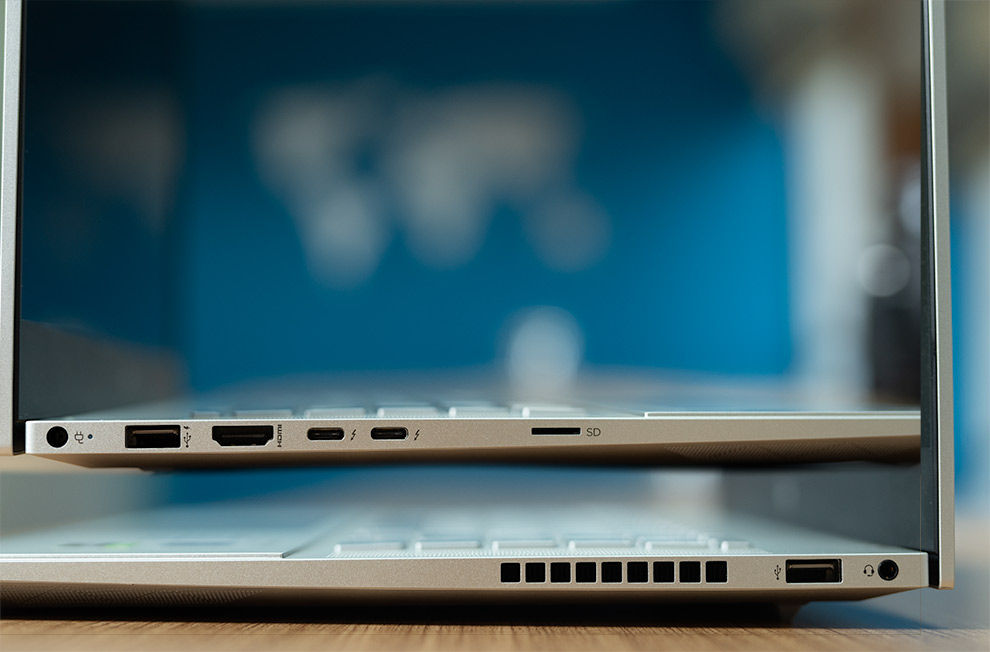 The HP Envy 15 packs a full HD IPS panel with a rated brightness of 300 nits and 100 percent sRGB coverage. We measured the panel brightness numbers to be very close to what HP claims and as for the colour accuracy, the display seems to be calibrated right out of the box. The white point is set for the sRGB colourspace, which is nice. However, if you're going to be using this for colour sensitive work, calibrating the display using a Spyder or an Xrite is absolutely necessary. This is because while the panel may be set to reproduce colours in the most accurate way, the ambient lighting in our working environment has an impact on the way we perceive colour. Professional colour calibration of the display tunes the display's colours taking the ambient light into account which allows for better colour accuracy when it comes to colour-sensitive work. The Envy 15 can easily be used for the purposes of professional photo editing, video editing and even colour grading. 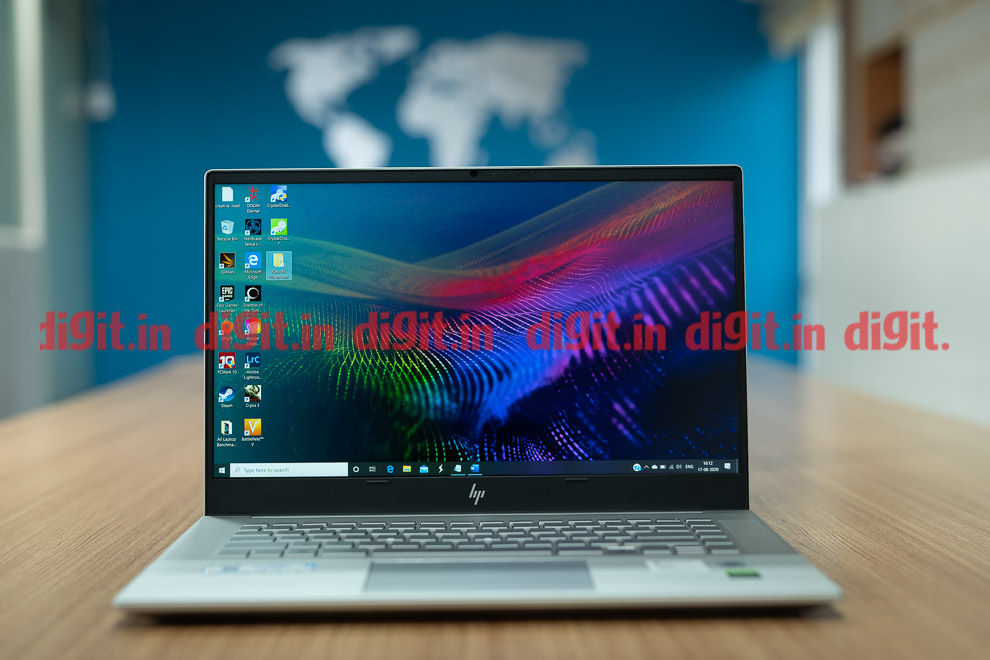 The HP Envy 15 is trying to take on brands that have practically ruled the kingdom. However at the same time, the MacBook Pro and the new Dell XPS 15 are considerably expensive, so the HP Envy 15 does fill up a massive price gap that currently exists. The review unit we received retails for Rs 1,49,999, currently being the cheapest of the creator laptops with Intel’s 10th generation processors. You could bump up the specs to an RTX 2060 and an OLED display if you wanted and still not hit the price point of the Dell or the MacBook Pro. The Envy does manage to deliver on the promise of good performance for creative workloads and can also easily hold its own when it comes to gaming. For the price, it does truly offer solid value for money and can be a solid recommendation for those who don the role of content creators and gamers.