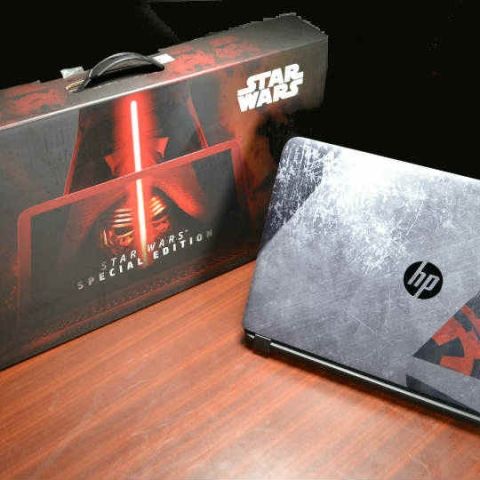 HP has done a fabulous job in bringing the Star Wars theme to an everyday laptop. It is a definite buy for anyone who loves the epic space saga and wants something to show off to their peers. Although, from a practical perspective you can get a better laptop at the same price.

The HP Pavilion 15-an003TX Star Wars Edition is a regular Pavilion laptop draped in the Dark Side’s black and red theme. In case you’re confused, the Star Wars saga has a Dark Side and a Light Side that represents the bad guys and the good guys, respectively. The laptop comes preloaded with thousands of artwork images, soundtracks, themes and ebooks on the Star Wars saga. If you are a collector, then this is a good device for you. You can find some of these on the web, but a lot of the Star Wars content here are exclusives in a way, and you’ll be hard-pushed to find them elsewhere. In short, you get a laptop with Star Wars written all over it. For those who aren’t fans of the franchise, though, and are interested in the actual performance and applications of this laptop, it’s time to move on to our review of the HP Pavilion 15 Star Wars Edition.

Design and Build
Lucas Films and HP have ensured that the design and artwork on the laptop is fabulous, and it shows. The dark theme representing the Dark Side is visually appealing, and this makes the laptop really stand out. The external patterns are not an additional vinyl, and are printed on the panel itself. There is Darth Vader on the lid, and a Storm Trooper on the right side of the palm rest. The entire laptop has a battle-worn look to it, which adds to the whole Star Wars experience except for the bottom panel, which is black with a matte finish, and has a nice feel to it as well. The touchpad also has the view of the famous trench that was there on the Death Star in Star Wars: Episode IV. To make the package even more authentic, HP has also printed “Galactic Empire” in Aurebesh on the laptop’s hinge, to add a sense of Star Wars exclusivity here. 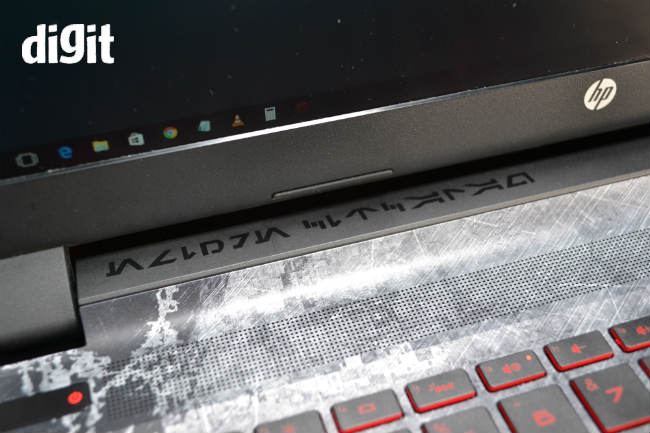 Moving to the build quality of the HP Pavilion 15-an003TX, it feels like a typical Pavilion laptop and that isn’t a bad thing. The overall build quality of the laptop is satisfactory. There is some flex in the display, which is expected considering the fact that the laptop has a plastic build. The hinge offers good resistance, and remains steady while moving the laptop around with the lid open. The HP Pavilion 15-an003TX has two rubber feet at the upper side of the base and a big rubber strip running at the bottom of the base, giving the laptop good grip. The battery is removable, and can be removed by unlocking the two interlocks that are located on the either side of the battery pack. The build quality, especially the matte-ish plastic, is certainly better than the Acer E5-574G that we reviewed earlier. 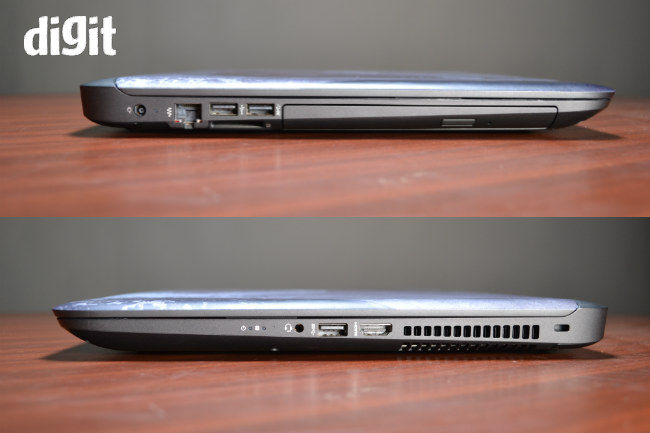 Moving to the I/O options available, the HP Pavilion 15-an003TX covers all the basic ports. To the left it has the power connector, an ethernet jack, a USB 2.0 port, a USB 3.0 port and a DVD drive. To the right it has the kensington lock slot, an HDMI Port, one USB 3.0 port and one headphone and microphone combo jack. As for the multi-SD card slot, it is placed below the two USB ports on the left, making it quite unreachable if you have a USB mouse connected to either of the left USB ports.

Keyboard and Touchpad
The island-style keyboard on the HP Pavilion 15-an003TX offers an average typing experience. The key spacing is good except for the top row, which has been squeezed in to accommodate the Bang & Olufsen speakers. All keycaps get a matte finish and red backlighting. While this looks really awesome in ideal lighting conditions, typing in the dark wasn’t a pleasant experience for us. It may appeal to some, but not all. Given the option, we would have preferred an old-fashioned white backlighting. Another point to notice about the keyboard is that the keycaps are slightly raised above the keyboard bed, which makes the red backlight bleed out, and that bleeding is visible while using the laptop. The bleeding of the keyboard's backlight is too bright for our preference. There is no way to control the intensity of the backlight. Because of the discomfort we faced with the backlight in the dark, we ended up turning on the house light, which somewhat defeats the backlight’s purpose. Many people, including ourselves, like to work late at night with the lights dimmed, and the intensity of the seeping backlight is a hindrance. Talking about turning things off, we tried using the keyboard without the backlight, and found out that unless you have night vision or a light source at your disposal, the keyboard looks completely black, owing to the matte finish on it. The only ray of hope here is that you don't have to press the function key to use the media keys on the top row. As for the general typing experience, there is ample depression in each key, but we feel that the typing experience on the Envy 14, which we reviewed earlier, was somewhat better. However, this is still better than what we experienced on the Acer E5-574G. 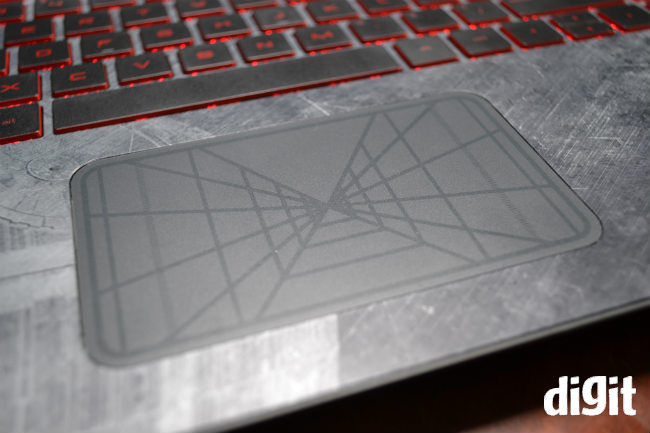 Like the keyboard, the touchpad on the laptop has very average performance. The touchpad is relatively smooth, and supports all Windows 10 gestures. However, the trackpad on the HP Pavilion 15-an003TX is not as responsive as the one we have seen on the HP Envy 13. The left and right click buttons are integrated at the bottom of the touchpad, and work well. Out of the box, the touchpad is well-balanced between speed and precision.

Display
Moving to the display, the HP Pavilion 15-an003TX has a 15.6-inch matte display which seems quite good for the price. Based on Lagom LCD test and compared to the Asus GL552JX, the colour saturation and contrast ratios seem good as well. The display has a resolution of 1920x1080p, and combined with the IPS panel, offers good viewing angles. The movie-watching and gaming experience on the laptop was great. Text legibility is good as well, whether you are typing out in Excel or Word. You can also use the laptop outdoors, as the visibility is good compared to other laptops in this price range with glossy displays. 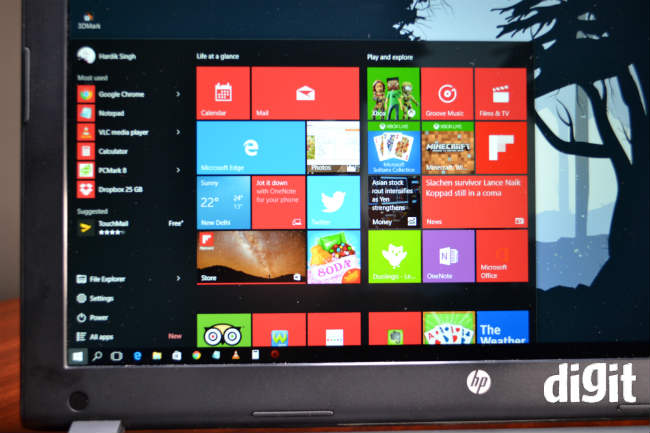 Performance
While the laptop may look old and battle-worn from the outside, it houses decent mid-range hardware under the hood. At its core is the new 6th Gen. Intel Core i5 processor — the i5-6200U. It is coupled with 8GB of DDR3 RAM, and an NVIDIA GeForce 940M with 2GB of vRAM. The specifications of the HP Pavilion 15-an003TX are good, and thus, the laptop can handle all small tasks with ease. We tried opening multiple apps, 20+ chrome tabs and played an 8GB 1080p movie file at the same time, and everything worked fine. It should be mentioned that in this sub-70k price, you can also get a few laptops running on Intel Core i7. 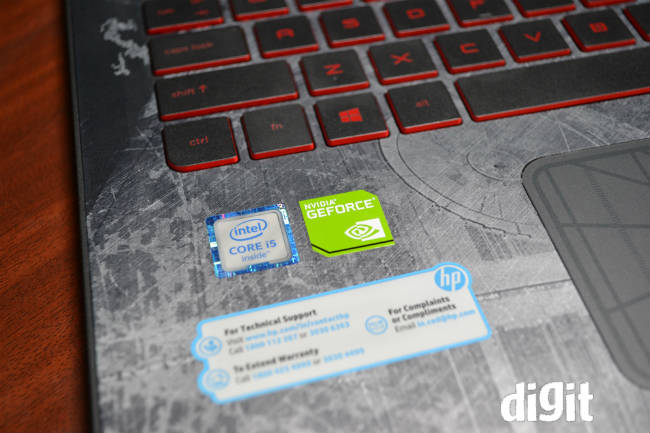 Gaming is the only grey area on the HP Pavilion 15-an003TX. We tried playing DotA 2 on the laptop at 1080p, which worked fine. Then we tried Metro: Last Light at 1080p, and it was at playable frame rates, but with tessellation and Vsync turned off, and graphics quality down to “low”. So, even though, 940M has its graphic limitations, Metro: Last Light was still playable at low settings. The laptop maintained reasonable temperatures while gaming that is to say below 70 degrees after an hour of gaming. 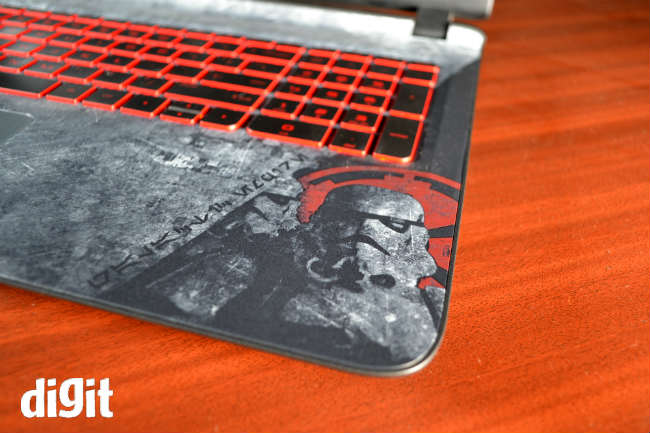 Bottomline
The bottomline here is simple — This is a normal HP Pavilion laptop in a fancy cover. There is nothing outstanding about the performance, either. However, If you look at the HP Pavilion 15-an003TX from the perspective of a Star Wars fan, you will love the laptop. In essence, this one is for people who wish to invest in Star Wars memorabilia, or just want to a new collectible for their Star Wars collection. This laptop is something you can buy if you wish to stand out from the crowd. Although, if you look at this device from a practical perspective, you can get the Asus GL552JX or the Acer Aspire E5-574G around the same budget of around Rs. 70,000.