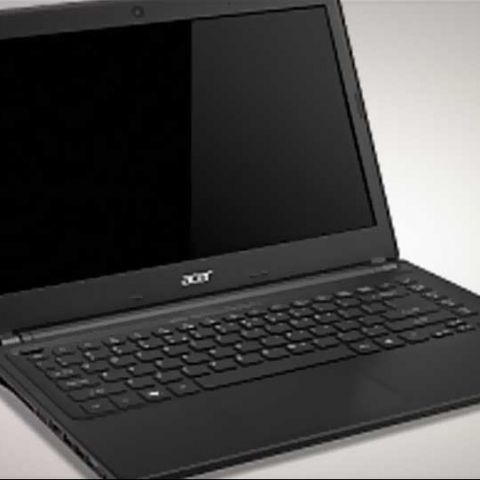 This isn't an ultrabook, but could very well be one. Performance is better than most ultrabooks as well, and the price is the real exciting bit. And after having just reviewed the very glossy Aspire V3, the matte finish on the Aspire V5 made us believe in a higher power again.

There seems to be a slight bit of confusion in the laptop world, about the distinction between a laptop and an ultrabook. First, we had the expensive Sony Vaio that came to the party mimicking an ultrabook. Now, the Acer Aspire V5 is here as well, and while it technically isn’t an ultrabook, it surely looks and feels like one. Performance though, is so much meatier!

Build & Design
This one has a matte finish, and that pretty much solves most of our problems! Unlike the cleanliness demanding nature of a shiny glossy finish, this one has a classy matte black finish. The same theme carries on throughout. Unlike the dual tone around the keyboard on the Aspire V3 (read our review), the Aspire V5 keeps it very understated and simple. You could probably blame it for being a tad drab, but we don’t find that one bit, mostly because simple doesn’t always mean boring.

The moment the Aspire V5 makes its way out of the box, the sheer slimness of it impresses. At around 0.9-inches thick and weighing 2.44kg, it can be slipped into any backpack and carried around with literally the sense of no weight. Interestingly, even with this slimness, the connectivity options have not been sacrificed.

Assume you are looking at the laptop head on, the left side will host the HDMI, three USB ports with one being the USB 3.0 one, the 3.5mm jack and a decently big vent for cooling. The right side is taken up by the optical drive. Memory card slot, as becoming a trend with the new Aspire series, is on the front left spine, close to where the notification LEDs are. The keyboard is the Chiclet styled one, and is accompanied by the unassuming looking power key. Thankfully, Acer hasn’t littered this with a million shortcut keys, and the cleanliness of it all is quite impressive.

The material used throughout is essentially plastic, but the build quality doesn’t see any “budget” tendencies to it. The biggest indicators are the quality of the laptop hinge and the solidity of the keyboard, and the Aspire V5 scores well on both aspects.

Features & Specifications
This very slim notebook is powered by the Intel Core i5-2467M processor clocking at 1.6GHz, and is paired with 4GB of RAM. This has Intel’s HM77 chipset (Panther Point), and yes, supports USB 3.0 natively. On the power front, this is pretty much an ultrabook-ish spec. The power package doesn’t end there. The Femi family Nvidia GeForce GT 620M with 1GB dedicated video memory is hiding in there somewhere, and more than separates it from the conventional ultrabooks. The GT 620M is paired with the Intel HD 3000 graphics in switchable mode.

Quite clearly, the idea was to keep this as slim as possible, offer basic computing without even remotely sacrificing performance but not forget the casual gaming demographic as well.

As with the Aspire V3 launched at the same time, the V5 also gets a 500GB hard drive. This is a conventional HDD, and not an SSD as the form factor would probably betray. We would prefer a smaller capacity SSD any given day, considering the performance boost it offers. However, the masses still would prefer 500GB on an HDD over lets say 128GB on an SSD, and Acer is rightly appealing to the wider demographic.

Most users also seem to prefer a bigger 15.6-inch display to a 13-inch one these days, probably because the machine then doubles up as a multimedia consumption device as well. Same is the case with the Aspire V5, with a native resolution of 1366 x 768 pixels. We quite like the brightness levels on this one. For most usage scenarios, you will ideally turn down the brightness quite considerably before it reaches the comfort zone. Crispness of the display, again something we really appreciated in the Aspire V3, is carried through here as well. Black levels aren’t very good, and that is probably the only niggle. But then again, this will only be a niggle for those movie buffs who are a bit finicky.

USB 3.0 comes natively to the new 7- series chipsets, and among the three USB ports on the device, one of them is the USB 3.0 one. Despite being very slim, this one

The Aspire V3 comes with Dolby application preloaded, but we really didn’t find any difference in the audio quality, with the same content playing back! This is the same thing that we noticed with the Aspire V5 as well, but we can’t blame the Dolby system for not doing its job, but it is probably the small laptop speakers that cant really punch out the difference.

A whole bunch of preloaded apps on the V3 – backup manager, games, webcam software and user guide, plus some third party utilities which include Cyberlink’s MediaEspresso and MyWin Locker. We prefer laptops with a clean Windows out of the box, and even for testing we remove all software or just re-install a clean copy of Windows.

Speaking of which, the Aspire V3 comes with Windows 7 Home Basic (64-bit) preloaded. That is a bit of a surprise, and we expected the Premium version to be the basic one, of not the Ultimate. We understand that the Aspire V5 and even the Aspire V3 are on a budget drive, but limiting the most critical thing (at least for user experience and functionality) is not the correct way to go about it.

Performance
The Aspire V5, quite clearly, does not have any aspirations of being a powerhouse. The spec sheet clearly says that. On the performance front, the benchmarks are a tad better than what we expected, which does say a lot for the overall package on offer.

The PC Mark Vantage score of 5855 points to very solid mid range performance. PC Mark 07’s score of 1701 is also does the same, verified again when we compare it to the 2055 score the more powerful Aspire V3 got. As we keep saying, this one isn’t an ultrabook, and surely packs in more performance. In real life usage performance, the Aspire V5 didn’t disappoint at all. With all unnecessary startup items turned off and some software uninstalled, Windows came closer to what it ideally should have been. Apps open very quickly, and doesn’t get bogged down by multitasking up to quite a decent extent.

For the gamers, there is some bit of good news. The 3D Mark 06 score of 8082 may actually be giving the Aspire V5 more credit than due. The more taxing 3D Mark 11 puts the picture more clearly in perspective – 1842 for Entry Mode, 1128 for Performance Mode and 345 in the extreme mode. While this one is not too far behind the Aspire V5 that has a more powerful GT 630M (2GB), the performance offered by the V3 is quite creditable. Will be able to handle the latest games at medium settings, but expecting any more will be asking for too much. Good enough for the casual gamers, we believe.

The battery life clocked two and a half hours in the battery tests. Set at full brightness, with the display on all the time and in High Performance mode, we believe the two and a half hours isn’t bad at all. Translate that into real life performance, and this should simply double. This one is clearly closing in on what most ultrabooks will offer.

We were a bit confused when we were testing the Aspire V3’s display. But this one is simpler to identify. There is no tinge of reflectiveness, and the entirely matte quality makes this a hot favorite amongst us lot. The advantage of this, is simply, you can use this anywhere without the stress of reflection of the ambient environment. Very comfortable display to use, even for long durations. Just be careful about keeping the brightness levels down, because this is a bright display and will get uncomfortable if not tamed.

The Chiclet keyboard has a dedicated number pad as well. Very comfortable to get used to, with the only thing you need to get used to is the left alignment of the touchpad. Speaking of which, while there is generous real estate space on the touchpad, the left and right click keys aren’t separate, and neither are they lightly marked on the existing surface.

Bottomline
For a price of around Rs. 40,000, the Aspire V5 cuould be your ultrabook-ish laptop, without having to pay ultrabook prices for it. For that reason, and that reason alone, it makes a lot of sense for anyone looking for a very slim and powerful laptop.