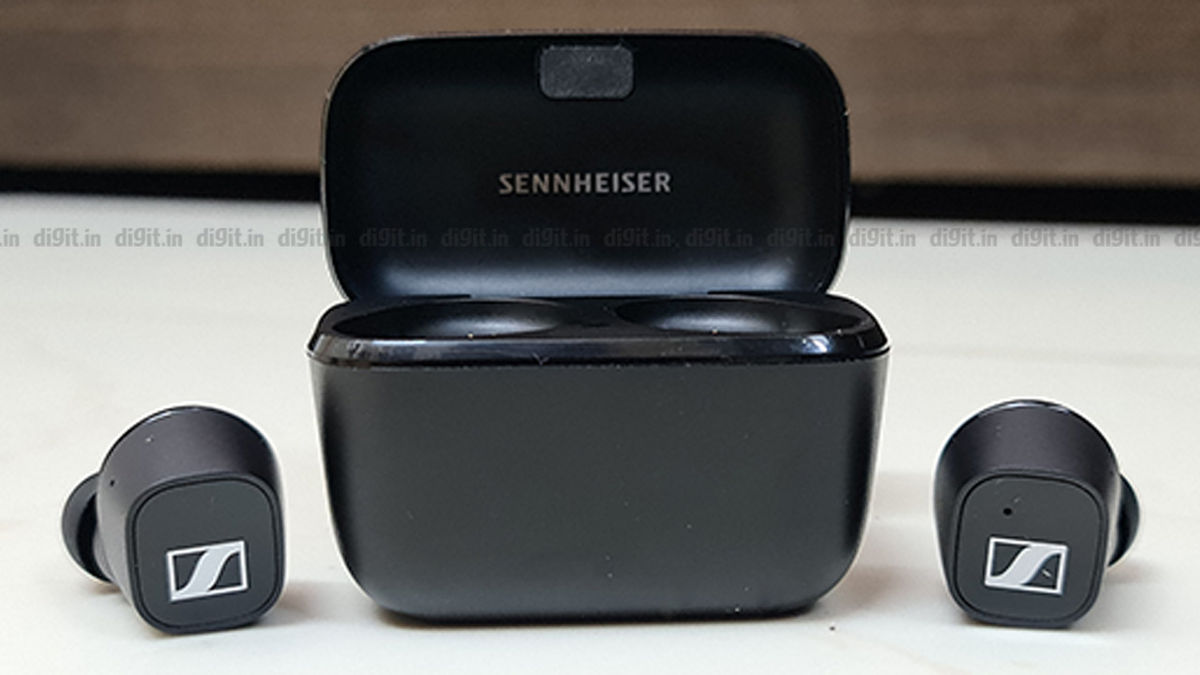 Sennheiser CX 400BT Review: Stellar sound, but compromises on a lot of features

Building on the relatively measured approach Sennheiser has taken so far with their true wireless lineup, the German audio company has now launched the Sennheiser CX 400BT, the mid-range model in their true wireless lineup that trims on some features to keep the price lower. The company’s lauded premium true wireless offering - the Sennheiser Momentum True Wireless 2 impressed us greatly earlier this year with its articulate and detailed sound and an impressive set of features. At Rs 16,990, the Sennheiser CX 400BT isn’t exactly what one would call affordable, however, if you want Sennheiser’s acclaimed sound quality and don’t want to shell out approximately 25K for that, then this is a viable option the company is providing. However, these true wireless earphones face a ton of competition at this price range from the likes of companies such as Sony, Jabra and Samsung. Let’s put these earphones under the scanner and see how they stack up against competitors. 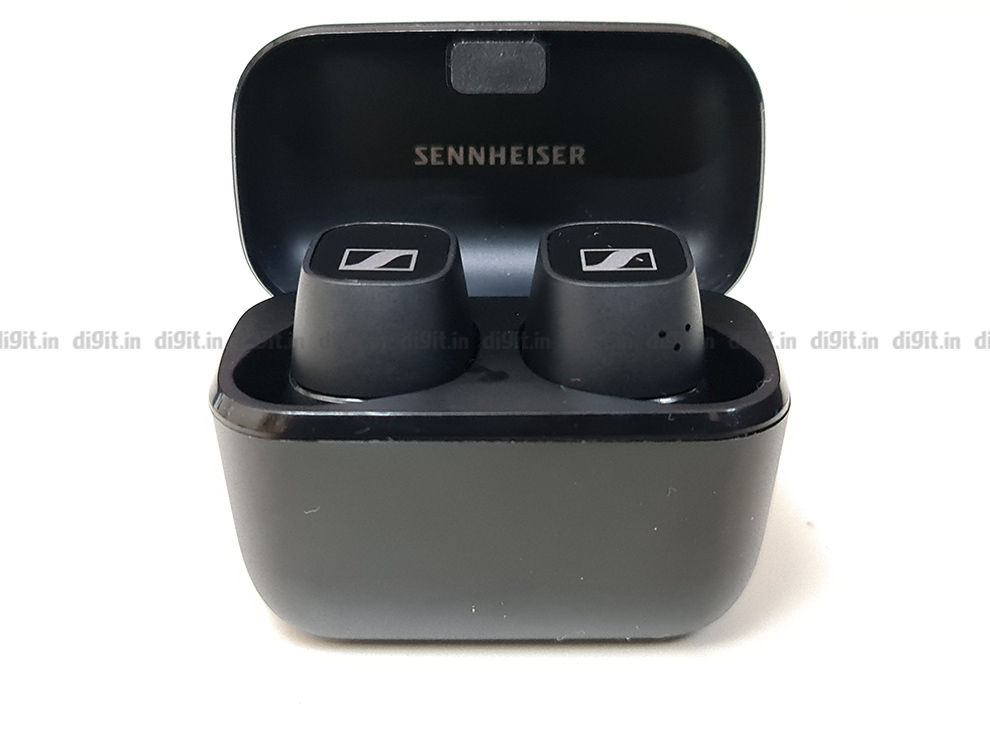 Sennheiser has opted for a more customary design with the CX 400BT that is vastly different than their premium counterparts. Featuring a rather prosaic matte black design with boxy rounded edges on both the charging case and earbuds, the earphones don’t have much to make them stand out in a crowd. The charging case’s lid is well-built, but it feels slightly cheap due to its thinness and the feel of the plastic. There’s no velvety texture on the charging case or the buds like the Jabra Elite Active 75t and the Sony WF-1000XM3 which makes them feel less premium to the touch. 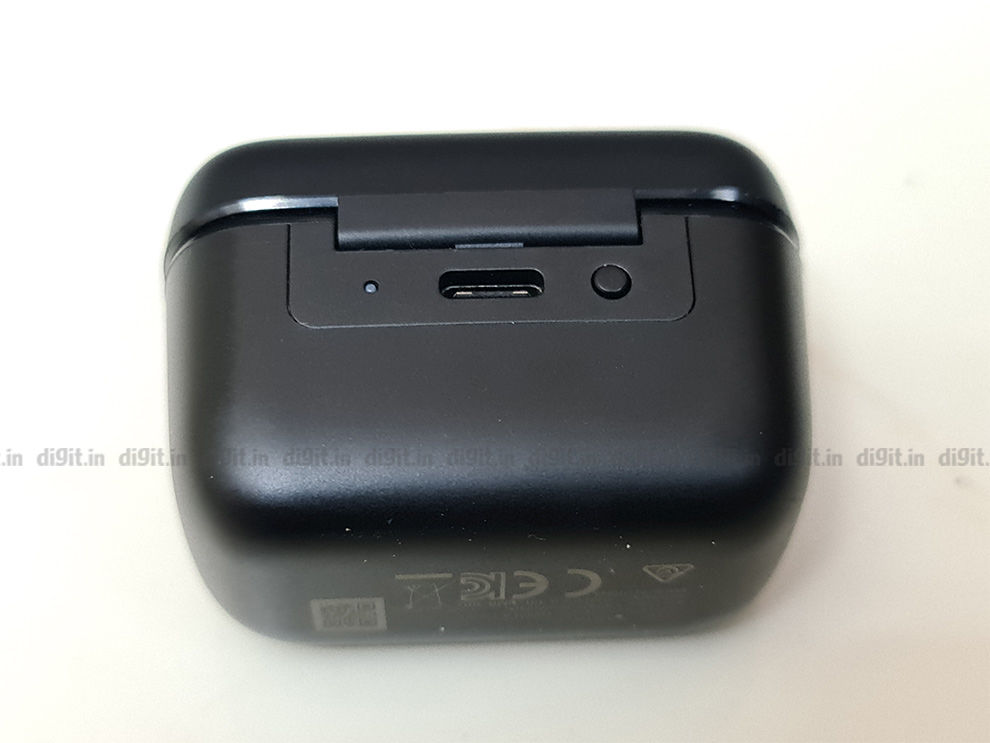 The Sennheiser logo, etched onto the lid in glossy silver, adds a tiny bit of flair to the otherwise bland case design. The rear tiny hosts the USB Type-C charging port, an LED indicator to display battery status and a button that lights up the LED. Upon opening up the case, you can see ‘Sennheiser’ written in white on the inside of the lid. The earbuds sit securely in the case, held in place by pretty strong magnets. The magnets that snap shut the lid are also quite strong. 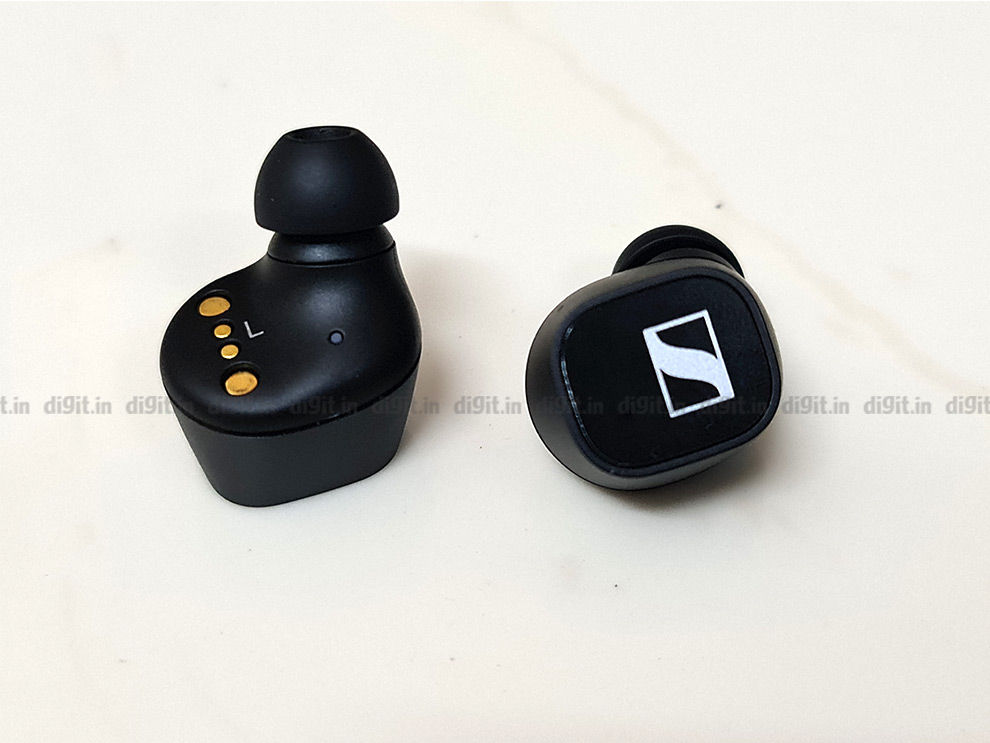 The earbuds have a rounded-rectangle shape, kind of like a ‘squircle’. The matte texture is present on the earbuds as well, except for the rear housings which have a glossy texture and come with the Sennheiser logo on them. The rear housings of the earbuds also double as a capacitive touch surface that can be used to control music playback and calls. Each earbud also features a tiny LED indicator that relays the power and/or connection status. 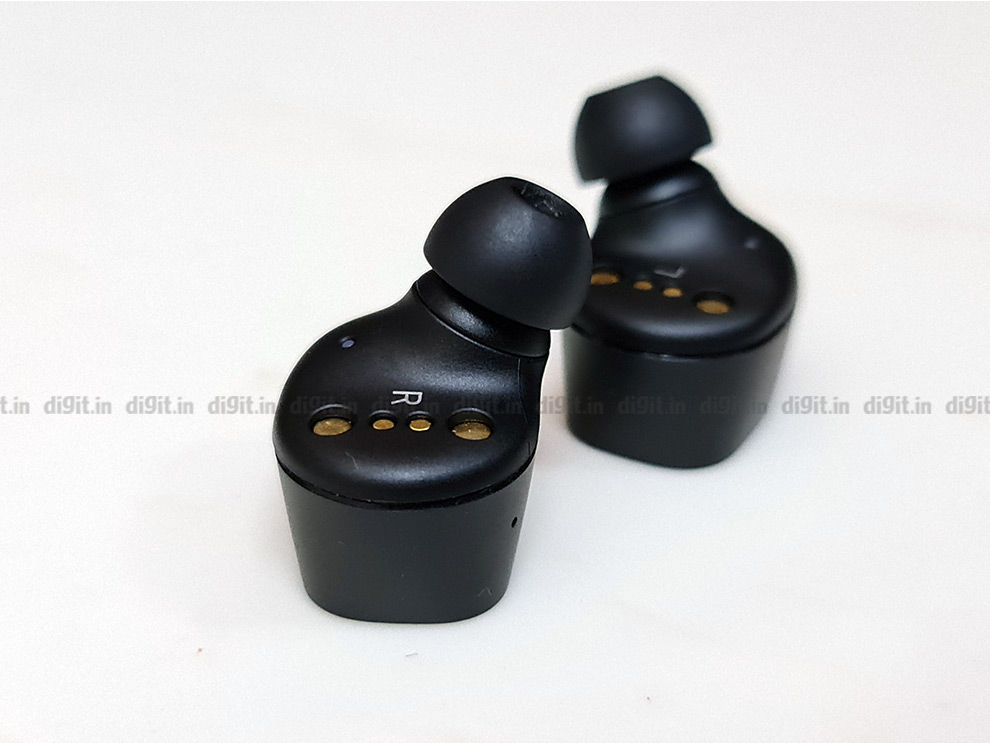 The earbuds were exceptionally comfortable to wear for us and we felt no wearing fatigue even after hours of listening to music. The shape of the buds latches onto the curves of your ear canal creating a snug fit that aids in comfort and even sound quality. The buds have to be twisted and secured once you push them into your ear canals to achieve this snug fit. Sennheiser has also provided four pairs of silicone tips to ensure everyone can get a good seal. The earphones didn’t budge much during activities such as jogging or running as well, however, since these earphones don’t come with any IP rating, we advise you against using them when running or working out, since they aren’t sweat resistant.

Features: Accompanying app and others

Much like the Sennheiser Momentum True Wireless 2, you can customise the onboard controls for the CX 400BT as well within the Sennheiser Smart Control app. Sennheiser doesn’t just allow you to change a group of functions but reassign almost every single action completely to what you prefer. The default controls are these - single tap on the right for activating the voice assistant, single tap on the left to pause/play music or answer/end call. A double-tap on the right takes you to the next track while double-tapping the left takes you to the previous one. A long press on the right increases volume, and doing the same on the left side decreases volume. Double-tapping either side also rejects an incoming call. 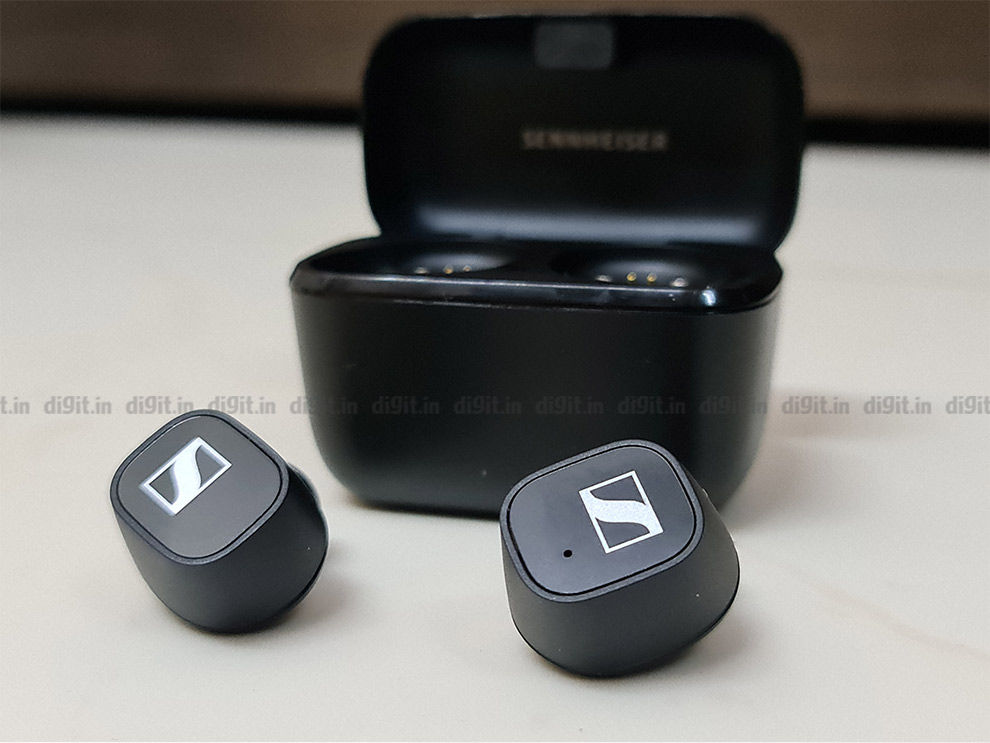 Now, the triple-tap function has nothing assigned by default but it is available should you want it. In our case, we chose to make single-tapping both sides pause/play music while a triple-tap on either side activated the voice assistant. Since we don’t utilise the voice assistant function too much, it made sense to go down this route for us. This is the beauty of letting you rebuild touch functions from the scratch. You can get exactly what you want, where you want if you don’t like the default settings. Not only that, but you can also disable touch controls altogether.

The accompanying app also offers customisable EQ options. There’s the classic curve EQ and then there’s the more intuitive slider EQ that you can choose from. You can even save a number of presets within the app and enable a particular one when you need it. 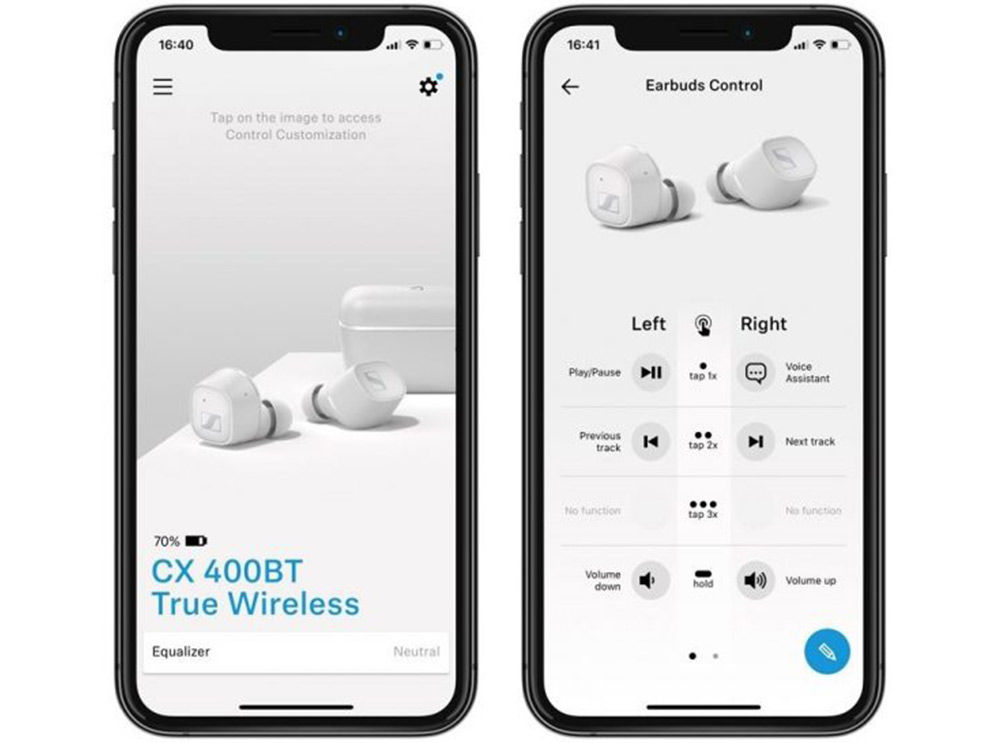 Now, apart from these features and a few others such as Bluetooth 5.1 connectivity, USB Type-C charging, and AAC and aptX codec support, the Sennheiser CX 400BT doesn’t have any other appealing features that are found on a few other true wireless earphones in this price range. The Sony WF-SP800N, which costs just 2K more, comes packing ANC, and the Sony WF-1000XM3 with its stellar ANC is available for just 3K more. If you don’t want to spend more, then the Samsung Galaxy Buds Live are available with ANC and Ambient Sound for about 2K cheaper. The Jabra Elite Active 75t, on the other hand, don’t come packing ANC technology, but they do feature Ambient Sound and even wireless charging for the case.

We expected to see at least one or few features such as ANC, Ambient Sound, wearing detection, and wireless charging, on these earphones considering there are competitors within the same price range that offer them. The lack of these premium features makes these earphones hard to recommend since they don’t offer enough value for the consumers for the price they are paying. Sennheiser should have either reduced the cost by 2-3K or added a couple of these features at the current price to justify their ask. It looks to us that Sennheiser is banking on its historically well-received sound to serve as a pull for customers.

Despite being baffled by the lack of features, Sennheiser has once again impressed us thoroughly with the sound quality on the CX 400BT. Ensure that you experiment with the silicone ear tips and find the best fit for you since it is integral to getting the best sound possible from the Sennheiser CX 400BT. Sporting 7mm dynamic drivers that were used on the pricier MTW 2 model, the Sennheiser CX 400BT exude a sonic flair that is rare at this price range.

The clarity and tonality is superb across most of the frequency range of the earphones (5Hz - 21kHz). The lows are especially smooth and impactful with bass sounds being delivered convincingly with loads of texture and attack. Tracks such as Another One Bites The Dust by Queen feature snaring drum hits that are full-bodied but do not overwhelm the mids in the slightest. The decay of individual notes is excellent and the entire low-end pretty much matches up to the calibre of the more expensive Sennheiser Momentum True Wireless 2. 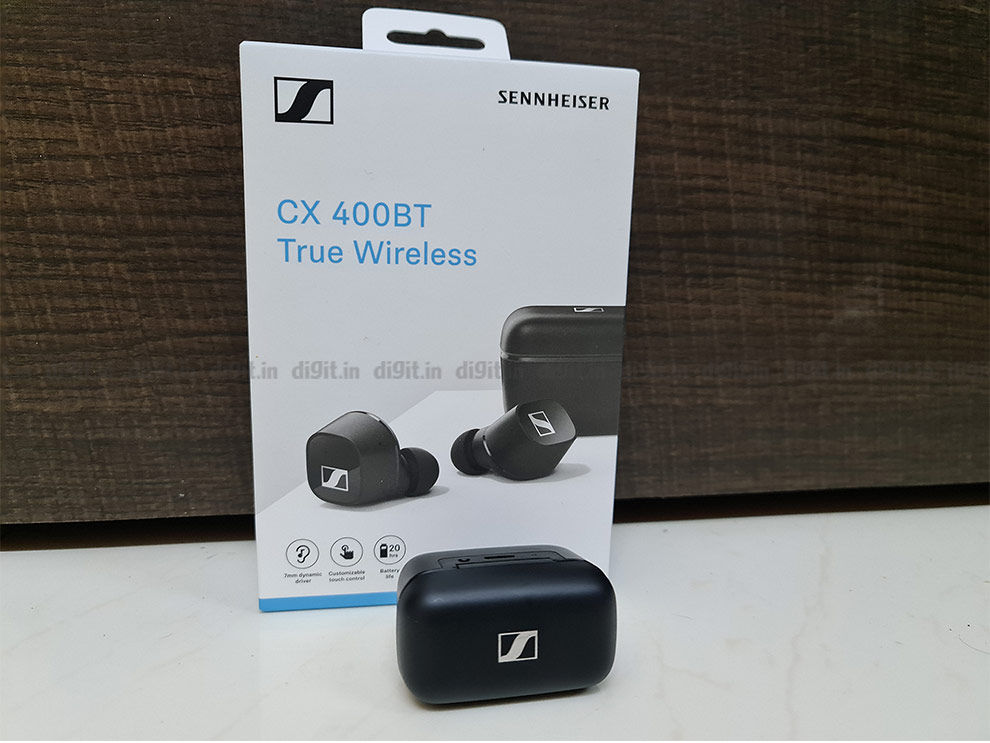 The mids are exquisitely reproduced as well with tons of detail and texture. In Hello by Adele, the earbuds are able to capture the intimacy of the starting few lines and the power of the chorus with excellent dynamics. Vocals, in general, are articulate and natural in most tracks across genres. The soundstage, as expected on Sennheiser earphones, is pretty good, however, it is slightly narrower than the MTW 2 and doesn’t have as much height as well. Imaging, though, is as good as the MTW 2, which accurate positioning of instruments even in crowded tracks such as Popular Monster by Falling in Reverse.

The highs on these earphones are a bit uncharacteristic for Sennheiser. They’re slightly more exaggerated than usual which brings out a lot of detail in the highs, but makes them sound slightly harsh too. In Hysteria by Muse, the cymbals were a bit jarring to the ear. However, you can always tone down the highs by a smidge in the customisable EQ. This is us being extremely nitpicky though and most people won’t be too bothered by the slight excitability in this range.

The Sennheiser CX 400BT is not a powerhouse when it comes to battery life, and certainly not when it comes to charging case battery capacity. The company claims a respectable 7 hours of playtime on the earbuds from full to empty. However, the charging case is only capable of 13 hours, as per the company, which is slightly less than two additional charges. The total battery life is approximately 20 hours, as per claims. In our tests, at about 60 percent volume, we managed to squeeze out 6 and a quarter hours of juice from the earbuds themselves, with the case providing two extra charges, which is pretty close to the company claim. 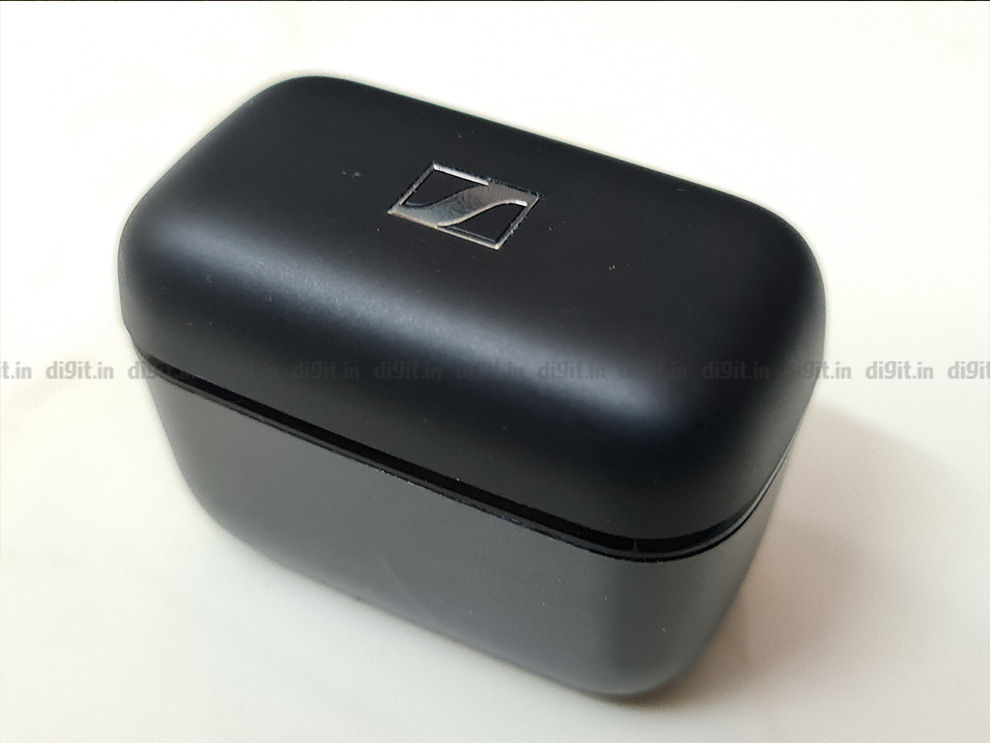