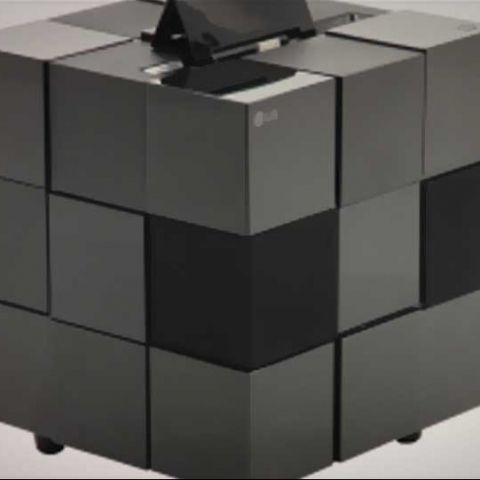 The LG ND8520 is a neatly designed dock which flirts the lines between minimalist and gaudy quite well. It packs a very powerful set of features like a USB port, auxiliary input, Airplay and Bluetooth. However, the purpose of a dock is to put you in an auditory bliss and the LG ND8520 falls significantly short of that. The sound is average at best and fails to impress, especially given that LG wants you to shell out Rs. 20,990 for it.

LG’s newest iDevice dock, the ND8520, also referred to as “the Cube” by us here in the lab, is an interesting dock to say the least. The dock is rather feature packed, and comes with an equally stellar price tag of Rs. 20,990. We’ve been throwing track after track at this dock and we’d like to share our findings with you. But let us begin by saying that we’d really hoped that LG would have given this dock an actual name, instead of a model number designation.

LG ND8520 stands about 10 inches tall, and is 10 inches in the other two dimensions as well. Quite literally a Cube, the dock weighs in at a 9.5 kilograms, making this a rather heft dock. The weight could easily be attributed to the down firing subwoofer that’s built into the dock. The near 2-inch tall rubber feet not only make sure that the sub has room to pump out the bass, but also keep the dock from slipping around, whether from accidental nudges or the bass.

The design characteristics of this dock leave us with some mixed feelings. LG ND8520 is comprised of a 3x3 array of smaller cubes, which alternate in the way they look. The top row has two glossy squares with one matte square in the middle. This matte square is a touch sensitive control panel for all playback needs. The middle row of squares sees the two mid-range speakers with a cloth grill that frankly feels out of place amidst the premium plastic build. The docking socket sits at the top of the dock and can accommodate anything with a 30-pin connector, even an iPad. LG has in fact bundles a little plastic contraption that can be attached to the dock in order to allow an iPad to rest easy on the dock. However, given the lack of support on the sides, we did accidentally manage to knock the iPad over to the side in on swift lateral movement of our hand. We strongly recommend caution when you connect an iPad to the dock.

One thing we didn’t like about LG ND8520 was that after a few days of being on our shelf, the dust was quite visible against its black glossy surface. We had to dust the dock quite often because the black surface provides a nice contrast against which the dust becomes very visible.

The LG ND8520 offers 80 watts of output which is split between the two 20 watt mid-range speakers and the 40 watt sub. The control pad on the front is actually quite nice as it works well with gestures. Swiping left and right changes songs, tapping on it starts and stops playback. To be honest, we never really used the touch interface because the remote supplied with the dock is quite functional. Every single aspect of the dock can be easily controlled from the remote, which gave us a good working range of 15-20 feet.

While the remote is nice and so is the touchscreen, LG ND8520 also supports Airplay and Bluetooth. Once we had it connected to our Wi-Fi, our iPhone was streaming content to LG ND8520 without any problems. This is especially great if you want the convenience of having the phone be with you at all times, and still have music play. Then there is an app that turns the iPhone (or iPad or iPod touch) into a Bluetooth remote, in case you lose the supplied remote. And if you’re not willing to part with your iPhone or iPad, you can always just plug in a USB loaded with MP3 or WMA files (the only two formats supported). While LG has gone all digital with LG ND8520, they have not forgotten those who are still in touch with the analogue era. The LG Cube comes with a built in FM receiver for those who love listening to the data frolicking in the airwaves.

To test the LG Cube, we compiled an extensive playlist of songs in both MP3 format (the files an average person would have) along with some high quality FLAC files. The playlist included songs spamming various genres such as classical (Beethoven and Bach), pop (Skyler Grey, Maroon 5), Rock (Incubus, Metallica), Psy-Trance (Infected Mushroom, Goa Gill), Dubstep (Skream, Skrillex) and Rap (Eminem, Dr. Dre).

We just got right down to it and started our test off with some classical music. Going through Bach’s Violin Concerto and Beethoven’s 9th Symphony, the first impression we had was that the dock seemed to be partial to the highs, but quite a margin. We couldn’t really hear much of the lower frequencies, especially in Beethoven’s 9th. Things got really bad when in the crescendo of Beethoven’s 9th Symphony, with most of the sound becoming quite muddled. Classical music is full of subtle nuances and this dock did a very poor job of highlighting those. We’ve had better experience with the Logitech S715, which costs significantly less.

We figured a change in the mood was definitely required, so we switched out the nuance-rich style of music for a style that is largely just one kind of tone at any given time; Dubstep. If you’re the kind of person who likes the “wub wub wub” to make his ears bleed, this dock will only make you want to hurl something at it. Despite a dedicated subwoofer, the bass on LG ND8520 is rather weak. Most of the bass drops fell flat on their face, despite us moving LG ND8520 around the room for a more optimal sound reproduction. We even changed the surface it sat on, from a wooden shelf, to the floor to having it sit atop a thick rug. We even had one poor soul hold it in the air hoping that the sound quality might get better with a change in surrounding surfaces, but to no avail. All we can say is that LG dropped the ball here, not the bass. Caspa, Skrillex, Nero and Skream would be sorely disappointed by this dock.

We figured that the LG ND8520 may not do so well with the sounds and tunes that exist on the polar opposites of the auditory spectrum so we put on a more balanced playlist that included our pop, psy-trance, hip-hop and some popular Bollywood tracks. We’re just going summarize the entire experience here. Psy-trance is a no go on this dock because the bass is lacking and most of the mids end up getting muddled, so the subtle transitions that a lot of the songs in the “electronic music” genre rely on end up becoming rather obvious and not-so-subtle. Genres like pop fared a lot better because most of them tend to be more vocal heavy, a department where LG ND8520 did surprisingly well. Skyler Grey’s Dance Without You played through the LG ND8520 with just as much clarity and sharpness as the song’s lyrics.

The LG ND8520 is a neatly designed dock which flirts the lines between minimalist and gaudy quite well. It packs a very powerful set of features like a USB port, auxiliary input, Airplay and Bluetooth. LG decided to throw the entire kitchen at you, not just the kitchen sink with this dock. We even loved the remote that came with the dock and the nifty little stand that makes sure your iPad sits right on the 30-pin connecter.

However, the purpose of a dock is to put you in an auditory bliss and the LG ND8520 falls significantly short of that. The dock failed to deliver strong bass, with most of it just coming out rather flat and loose while the classical era was betrayed when it came to the subtleties of melody. However, if pop music is your only genre of choice, then the dock will fare better than it did for other genres. The sound is average at best and fails to impress, especially given that LG wants you to shell out Rs. 20,990 for it. It seems like you’re paying quite a lot of money for a lot of bells and whistles while not getting much when it comes to the core competency of the product which happens to be the audio. We’d recommend waiting till the price on this thing drops, or if you must have a dock, then look at other options like the Logitech S715.