JBL Pulse 3 Review: A waterproof speaker that doubles as a lava lamp 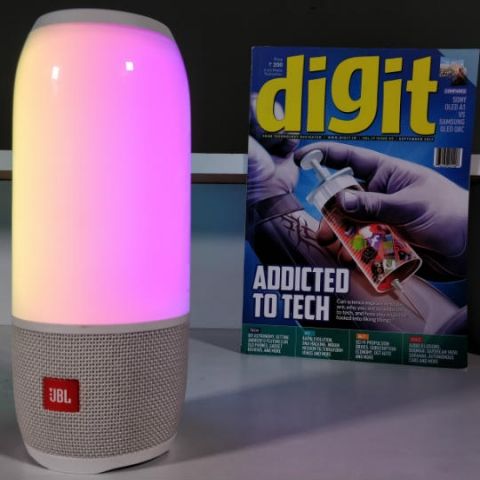 This has to be the best LED implementation on a JBL Pulse speaker. It looks like a Lava Lamp and can easily blend into your home decor. It can also be an attraction at a picnic or a party with the light show. The battery life suffers, clocking in under 9 hours with the LEDs on all the time and around 11 hours if you turn off the LEDs. This may be a bummer for some as competing devices like the UE Boom offer upwards of 14 hours of battery life. Overall, it’s safe to say that the audio quality from the speaker is good.

When you think of a Bluetooth speaker you generally think of a small square or round shaped device that is lightweight, portable and has a functional design. With its Pulse series, JBL changed that. The pulse series of JBL’s Bluetooth speakers give you a visual treat in the form of an LED show on the exterior of the speaker. Now in its third generation, we have the JBL Pulse 3. It boasts a better arrangement of LEDs when compared to its predecessors, is waterproof and you also have the ability to wirelessly connect more than 100 JBL Connect+ enabled speakers together. So, imagine a hundred of these putting on a show for you. But at an asking price of about Rs 15000 is it the best option out there for you, or are you better off considering the alternatives?

The JBL Pulse 3 has a cylindrical design, similar to what we’ve seen on its predecessor. A little more than two-thirds of the speaker are dominated by the LED light show. The bottom third has a speaker grill that houses three 40mm drivers giving the speaker 360-degree audio. At the top and bottom of the speaker, you have the bass drivers. The bottom firing driver doesn’t touch the table when placed because of the rubber feet. However, the audio does sound muffled when placed on a table. You can forget about making this speaker stand on a bed to enjoy music. The speaker grill on the Pulse 3 is covered with the company's signature cloth material, which helps with its waterproof capabilities. The Pulse 3 is IPX7 rated, meaning that the device can withstand immersion in water up to one meter for 30 minutes. For this you will have to keep the flap of the speaker shut.

Below the flap rests the micro-USB port for charging and the Aux port. Above the flap, you have the power button with 5 LEDs above it, indicating battery life. You also have the volume up and down buttons, play/next button, the Bluetooth button and a "360 degree lightshow" button. The buttons are convenient to press, but you will need to look at them as their placement isn’t ideal for interaction without looking. 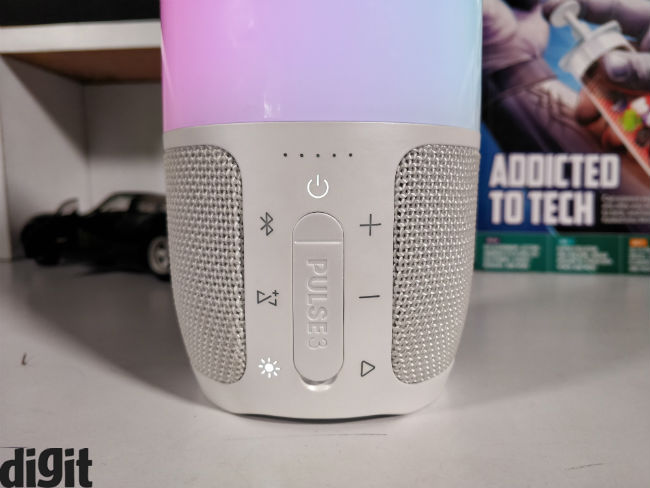 The ability to link the JBL Pulse 3 speakers isn’t only limited to audio output. You can also sync the LED "lightshow" which can be quite entertaining.

Overall, the speaker is heavy, feels well-built and in case you are wondering, no the LED housing isn’t glass, it’s made from composite materials. The LED light show looks extremely attractive and has some neat customisation options for you to enjoy. It has some subtleties too, like increasing and decreasing the light based on the volume level. It looks a lot like a lava lamp and can definitely add to your room's decor. 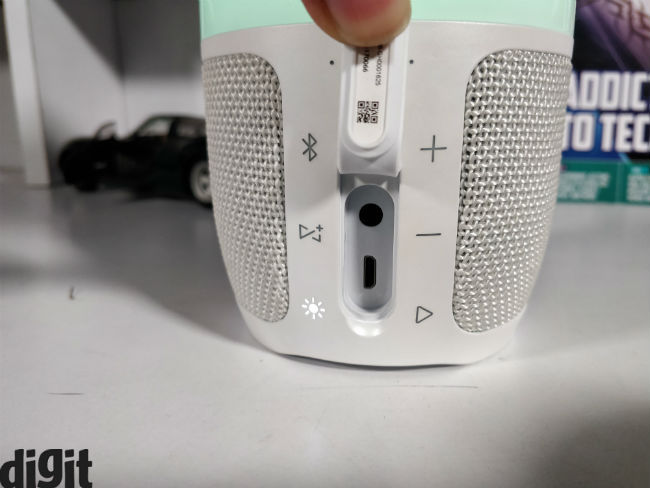 To take full advantage of the JBL Pulse 3 you will need to download the JBL Connect app on your smartphone.

Apart from helping you update the speaker firmware, the app is quite nifty, especially where the lights are concerned. You can see the charging level of the speaker via the app, daisy chain a bunch of JBL speakers or use two speakers for a stereo effect.

You have eight different lightshow options ranging from campfire, rainbow, rave, fireworks and more. You can also customise the LED colours. Don’t know the exact colour of your duvet? No worries, you can use the camera of your smartphone to recognise the exact colour and have that reflect from the LED of the speaker. 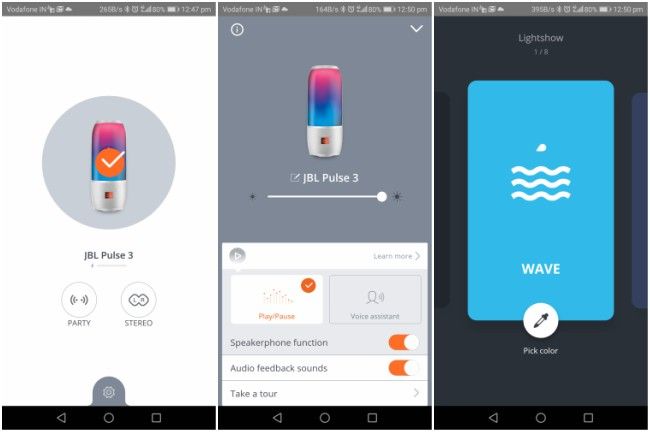 You can also customise the play button on the speaker to either play/pause music or work as the wake up button for your Google Assistant/Siri.

The app is a nifty addition to the speaker and if you spend enough time, you can truly customise the lights on the speaker.

All the shenanigans aside it’s time to talk about the core audio quality of the speaker. To begin with, pairing with your smartphone, laptop or Amazon Fire TV Stick happens in a heartbeat. Reconnecting is also pretty fast. The process is faster than my first-generation UE Boom, for those looking for a reference of speed.

Coming to audio, we heard a bunch of tracks from Daft Punk's Instant Crush, to Counting Stars by OneRepublic and even some Bollywood tunes like Kar Gayi Chull from the movie Kapoor & Sons, some classics like Hotel California and Kishor Kumar songs.

You won’t be disappointed with the performance of the speaker. It lacks bass at times and sometimes (the tracks of yesteryears especially) don’t sound warm enough. The lyrics are crisp and clear and the vocals stand out in tracks like Hotel California. Daft Punks Instant Crush was the only song that I didn’t enjoy on the speaker. Playing the same on the Logitech UE Boom, it felt like the beats were slightly muddled on the JBL. That’s the only song that gave me this feeling.

Overall, the speaker is very good with audio quality (though the bass reproduction can feel low at times), but if you asked us, we think the second-generation UE Boom has slightly better audio quality in this price range overall. 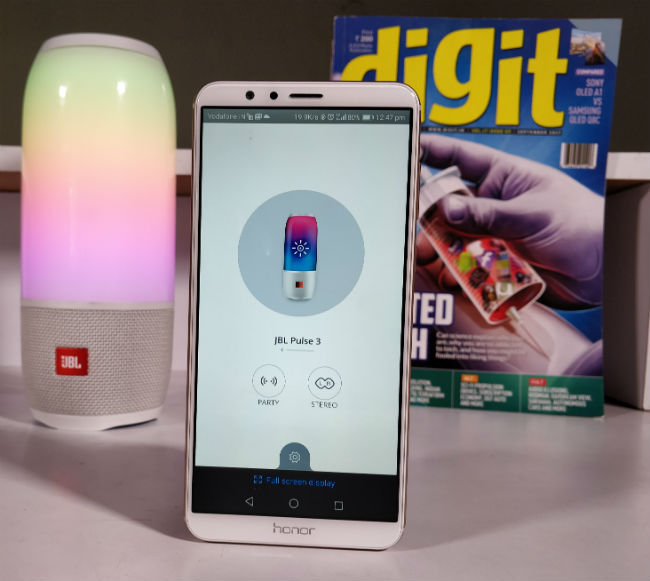 When it comes to loudness, the speaker can get pretty loud. It can fill a decent sized living room all by itself and be the heart of a party at 80 percent volume.

Coming to the movie performance, watching a couple episodes of Big Bang Theory, Brooklyn Nine Nine, Peaky Blinders etc, the dialogue is clear and the overall output is loud and crisp. The source for these shows was Amazon Prime and Netflix. They, of course outperform the laptop's speakers we were watching the shows on and overall have an entertaining experience.

This has to be the best LED implementation on a JBL Pulse speaker. It looks like a Lava Lamp and can easily blend into your home decor. It can also be an attraction at a picnic or a party. The battery life suffers, clocking in under 9 hours with the LEDs on all the time and around 11 hours if you turn off the LEDs. This may be a bummer for some as competing devices like the UE Boom offer upwards of 14 hours of battery life. Overall, it’s safe to say that the audio quality from the speaker is good. 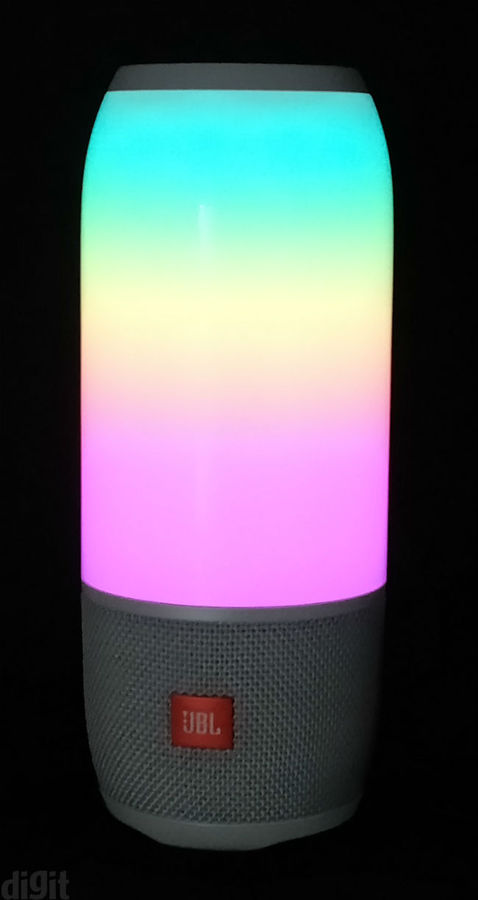 Apple AirPods 3 Review: A step up over its predecessor