NASA has four missions in total, which could one day help us in getting astronauts to Mars. 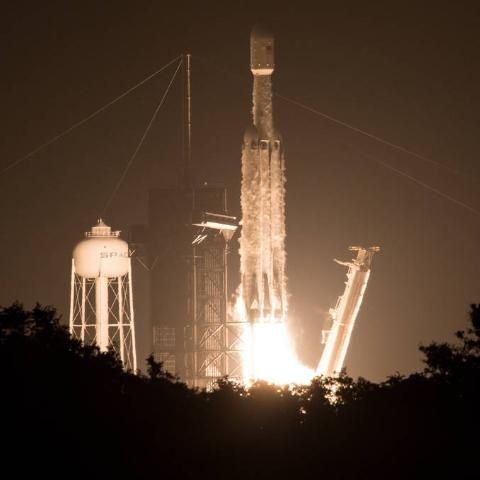 As part of the Department of Defense’s Space Test Program-2 (STP-2), four NASA missions were sent to space yesterday at 2:30 AM EDT (12:00 PM IST) from NASA’s Kennedy Space Centre in Florida. The launch vehicle used for the missions was the Falcon Heavy partially reusable rocket designed and built by SpaceX. While the Elon Musk-led space agency managed to launch the rocket into space successfully, it failed to save the center core of its rocket.

NASA, on the other hand, is currently getting busy with the deployment of its missions, which it believes could one day help the agency get astronauts to Mars. They are also designed to help NASA understand the space environment around us better. All four missions will operate for about a year each, which is sufficient time for them to mature and be tested, says NASA in its news release. According to Jim Reuter, Associate Administrator for NASA’s Space Technology Mission Directorate, the missions “benefited from strong collaborations with industry, academia and other government organizations.” Here’s a summary of what NASA intends to do after the launch:

NASA’s E-TBEx (Enhanced Tandem Beacon Experiment) is made up of a couple of NASA CubeSats that work in conjunction with NOAA’s COSMIC-2 mission, which in turn, consists of six satellites, each carrying a radio occultation receiver developed at NASA’s Jet Propulsion Laboratory. Together, E-TBEx will explore bubbles in the electrically-charged layers of Earth’s upper atmosphere, which are capable of disrupting communications and GPS signals that we depend on every day.

NASA’s E-TBEx operators will take up to three weeks to “check out” the CubeSats to ensure power, navigation/guidance, and data systems are in order. Then science beacons that send signals to antennas on the planet will power up and begin transmitting to ground stations. The mission will end after about a year’s time.

NASA’s new timekeeping device is quite literally out of this world. According to NASA, its Deep Space Atomic Clock is a toaster-sized instrument travelling on a commercial satellite. This particular atomic clock will test a new way for spacecraft to travel in space. In the future, the atomic clock could help uncrewed and crewed rovers get around on the Moon and Mars using a GPS-like navigation system.

The ultra-stable oscillator, the component that is partly responsible for precise timekeeping, is set to power on two to four weeks after the launch. The entire atomic clock is up and running in about four to seven weeks after launch. The preliminary performance of the device is tested three to four months after launch. A full year or so later, the mission ends and the final data analysis begins.

The GPIM or Green Propellant Infusion Mission powered on as soon as it was launched in space at 3:57 AM. It involves the test of a new propulsion system that runs on a high-performance, non-toxic spacecraft fuel. It could help propel constellations of small satellites in and beyond low-Earth orbit, explains NASA.

Mission operators are expected to ensure the correct operation of the propulsion system heaters and thrusters one to three weeks after the launch. During the first three months, GPIM will be used to perform three lowering burns that place the spacecraft in an elliptical orbit. With each burn, the spacecraft gets closer to Earth. The secondary instruments aboard GPIM are to measure space weather and test a new system that continuously reports the spacecraft’s velocity and position. After a year, a final burn is performed to deplete the fuel tanks on GPIM. The mission ends after 13 months.

The US Air Force Research Laboratory’s Demonstration and Science Experiments (DSX) were the last mission to be launched from the STP-2. Space Environment Testbeds, or SET, is an instrument made by NASA’s Jet Propulsion Laboratory. It will be used to study how to protect satellites from space radiation better by analysing the harsh environment of space near our planet and test various methods to lessen the impacts.

The Sun is one of the elements causing harmful radiation. SET will be turned on three weeks after launch. Data collection will begin eight weeks after launch. The mission ends after a year. “It was gratifying to see 24 satellites launch as one,” commented Nicola Fox, Director of the Heliophysics Division in NASA’s Science Mission Directorate. “The space weather instruments and science CubeSats will teach us how to better protect our valuable hardware and astronauts in space, insights useful for the upcoming Artemis program and more."