The COVID-19 outbreak has, as you may know, forced innumerable companies to postpone product launches, cancel public events, and shut down factories. Among the affected is popular Chinese smartphone brand Vivo, which noted in mid-February via Weibo that the Funtouch OS 10 software update based on Android 10 would see a delayed roll-out for many handsets. The company has since shared a revised roadmap that tells us when we can expect to see the latest Android version on Vivo models.

According to a report filed by DealNTech, Vivo will roll out Funtouch OS 10 in phases. The first 4,000 early adopters of the NEX 3 5G will receive the first public beta version on March 14 if they sign up for it. Towards the end of the month, users of the X27, X27 Pro, and X27 (8GB RAM + 128GB storage variant) will see their update. In April, many NEX owners can expect to receive their update along with owners of the S5. However, users of the Z5, Z5i, Z5x, S1, and S1 Pro will see their update only towards the end of June. The same goes for the owners of the Z3,  Z3i, Z3i Standard Edition, X21s, and X23 Symphony Edition. 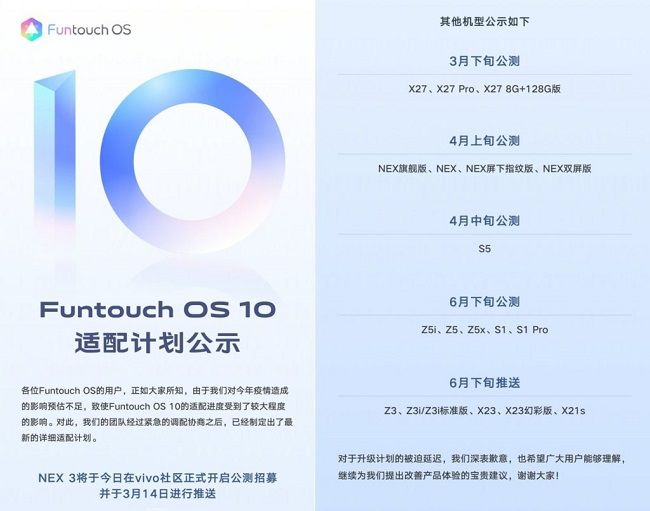 Since the Funtouch OS 10 update will first be rolled out to Vivo customers in China, users who reside in India may have to wait for a little longer. Apart from the Android version upgrade, Funtouch OS 10 reportedly delivers a new animated lock screen, live wallpapers, iOS-inspired icons, etc. It is also expected to come with a new screen mirroring feature that lets Vivo users share what’s on their screen easily. The update is also expected to bring an upgrade to the proprietary JOVI Smart Voice assistant.

Vivo is a day away from launching the NEX 3S 5G in China. The upcoming handset is expected to be a production-ready embodiment of the APEX 2020 concept smartphone that Vivo showcased late last month. The VIVO NEX 3S 5G is expected to be powered by a Qualcomm Snapdragon 865 chip with up to 8GB of RAM. The handset’s screen is expected to measure 6.89 inches with a maximum resolution of 1080 x 2256 pixels. The APEX 2020 is best known for its gimbal camera, which means the primary rear camera sensor is housed inside a tiny gimbal-like structure to help improve optical stabilisation while capturing photos. Read more about it here.