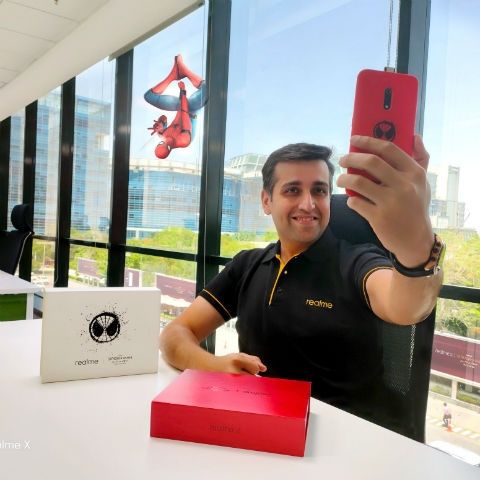 The Realme X was first unveiled in China on May 15.

It sports a pop-up selfie camera.

The smartphone is powered by the Snapdragon 710 SoC.

Realme is all set to launch the Realme X(₹ 16799 at amazon) in India on July 15. Realme's CEO, Madhav Sheth has now confirmed on Twitter that the company will also launch a Spider-Man Far From Home special edition of the Realme X on the same day. The smartphone was first unveiled in China on May 15. For those wondering about the price, Realme's India CEO previously said that the device will be priced between Rs 18,000 to Rs 20,000. This price tag is slightly higher than what the phone costs in China, which is about Rs 15,000.

Coming to the specifications of the Realme X, the smartphone sports a 6.53-inch AMOLED Samsung display, with Gorilla Glass 5 protection. The smartphone has a 91.2-per cent screen-to-body ratio. This is achieved because the device has a pop-up selfie camera. The smartphone also sports a sixth-generation optical in-display fingerprint sensor. It launched in China in two colours - white and blue. There were two special colours announced in China as well inspired by onion and garlic. You can read more about the special colours here.

Under the hood, the Realme X is powered by a Qualcomm Snapdragon 710 processor, along with a copper-pipe cooling which the company claims reduces the temperature by 15.2 per cent while gaming. In China, the smartphone is available in three variants - 4GB RAM + 64GB storage, 6GB RAM and 64GB storage and 8GB RAM + 128GB storage variant. The special edition variants come with 8GB RAM and 128GB storage. A 3765mAh battery powers the entire package with VOOC 3.0 support.

Speaking of the optics, the Realme X has a 48MP rear camera with a Sony IMX 586 sensor along with a 6P lens with an aperture of f/1.7. There is also a 5MP secondary sensor accompanied by an LED flash. Realme claims that the phone can shoot 960fps slo-mo videos. For the popup selfie camera, we get a 16MP shooter with a Sony IMX471 sensor with an f/2.0 aperture.

As mentioned above, there will be a Realme X Spider-Man Far From Home special edition which will come with a special retail packaging and exclusive cover for the phone. The theme will bring with it icons and wallpapers on the smartphone.

I am really excited to announce our collaboration with #SpiderManFarFromHome for Realme X. See you at the premiere. pic.twitter.com/sTBJhXMAN0