OnePlus 9 Pro is confirmed to feature a 6.7-inch QHD+ (3216x1440 pixels) resolution OLED display that also supports upto 120Hz refresh rate. OnePlus is all set to launch the OnePlus 9, OnePlus 9 Pro and the much-awaited OnePlus Watch on March 23 in India. The company has been teasing some key features of the OnePlus 9 series and has also announced its partnership with Swedish camera-maker Hasselblad for improving the imaging capabilities on OnePlus phones going forward. 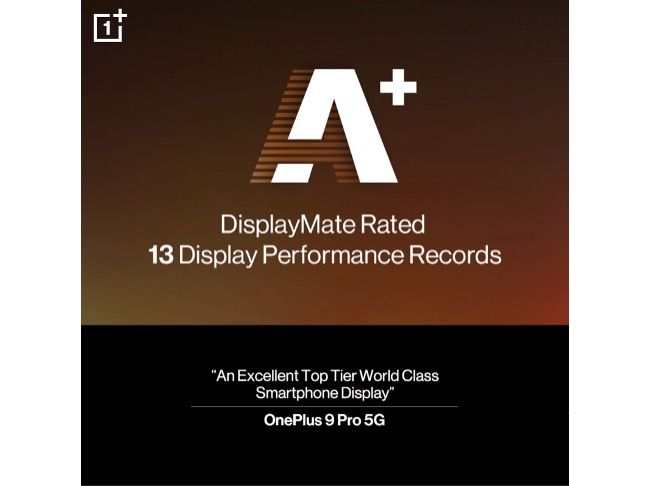 In a DisplayMate report shared exclusively with PCMag, we get to know a lot more about the display of the OnePlus 9 Pro. The OnePlus 9 Pro flaunts a curved screen that has been sourced from Samsung and has been tuned by OnePlus for better colour accuracy and visuals. Meanwhile, over at the OnePlus Forums, the company has officially revealed that the display on the 9 Pro has received an A+ rating from DisplayMate and that it supports 10-bit colour depth with 1 Billion colours, HDR10+ certification and Automatic Color Temperature Adjustment.

"The 9 Pro has a very impressive, excellent, top-tier, world-class smartphone display with close to textbook-perfect calibration accuracy and performance, that is visually indistinguishable from perfect," says DisplayMate President, Dr Raymond Soneira describing the display on the OnePlus 9 Pro.

We led the industry in introducing high refresh rate displays, and now we’re leading in … low refresh rates. The #OnePlus9Series LTPO display can switch anywhere from 1-120 Hz, just when you need it. Fast, smooth, and lighter on your battery. pic.twitter.com/erOGmeSYzP

OnePlus 9 Pro’s display has greater sunlight legibility and has a special high-brightness mode that activates when there is a lot of ambient light. Furthermore, the OLED display on the OnePlus 9 Pro also features the next generation of display technology called LTPO (low-temperature polycrystalline oxide) which succeeds the LTPS technology. With LTPO, the display on the 9 Pro gives more control over refresh rates and saves a lot of power.

While the screen supports upto a 120Hz refresh rate, it can go down to as low as 1Hz in order to consume less battery. “When you're scrolling, the screen moves at 120Hz. Stop, let it sit, and it drops to 1Hz. Watch a video at 30fps, and it runs at 30Hz. This all operates in service of battery life,” the report states. The display is also confirmed to feature a 360Hz touch sampling rate which is more than the Galaxy S21 and the ROG Phone 5. However, there are only some games that will take leverage of a high touch sampling rate and those will be revealed on the launch day.

OnePlus 9 series launches in India on March 23 and here is everything we know about it so far.