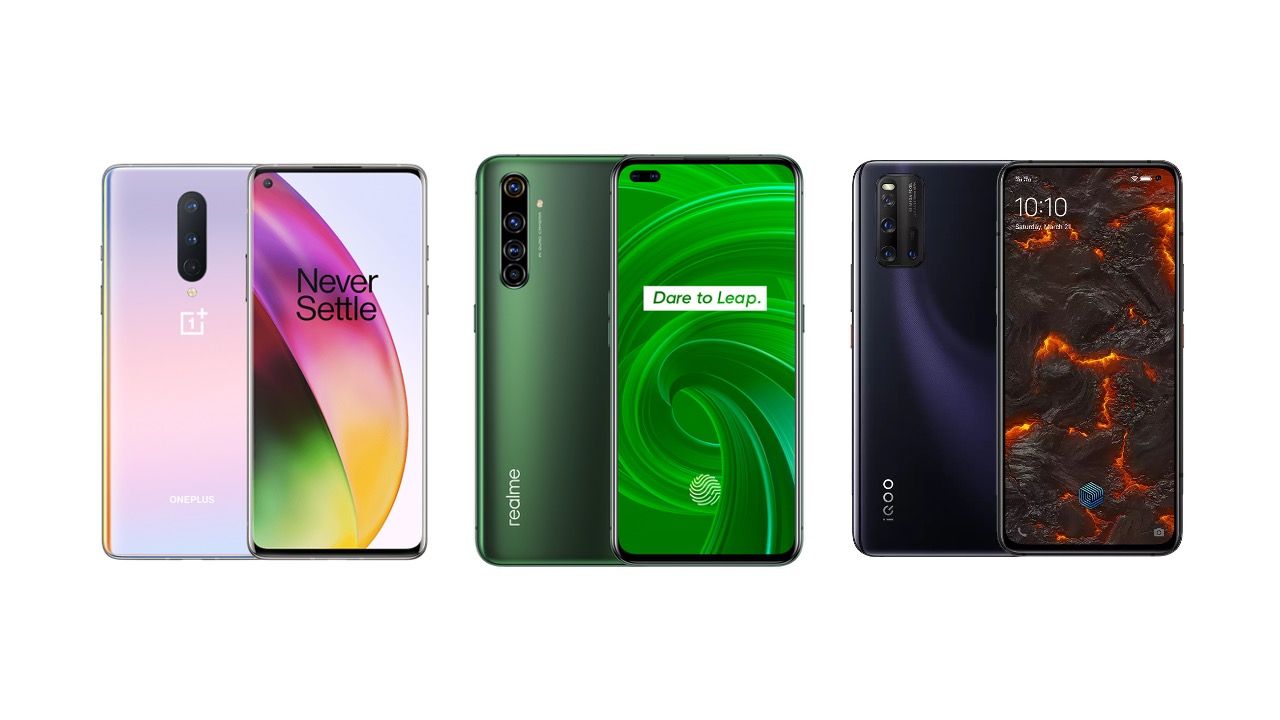 OnePlus 8 has just broken cover and was unveiled globally alongside the OnePlus 8 Pro. The successor to the popular OnePlus 7, this phone builds upon the flagship roots with the latest processor, an upgraded display and cameras that are aimed at the masses. It goes up against the likes of Realme X50 Pro and the iQOO 3 that debuted earlier this year. All of them, flagships in their own rights, are amongst a growing list of phones that bring in 5G support, even when most markets aren’t 5G enabled yet.

Nevertheless, if you’re looking for a powerful flagship phone that doesn’t pinch your pockets a bit too much, here is a comparison between three latest flagship phones-- OnePlus 8 vs Realme X50 Pro vs iQOO 3.

OnePlus is yet to reveal its prices in India, however, the phone starts at $699 globally which translates to Rs 53,000 approx. directly converted.

OnePlus 8 vs Realme X50 Pro vs iQOO 3: Design and Display

The profile of the OnePlus 8 is much thinner than the other two phones measuring 8.0mm at its thickest point. In comparison, the Realme X50 Pro is 8.9mm thick and the iQOO 3 is 9.2mm thick. As for the weight, the OnePlus 8 is also the lightest phone out of this roster weighing 180 grams. The X50 Pro weighs 205 grams while the iQOO 3 has a bit of more heft at 214 grams.

Out of the three phones, the OnePlus 8 features the biggest display measuring 6.55-inches while the other two phones make do with a slightly smaller 6.44-inch screen. All three use AMOLED panels with a Full HD+ (2400 x 1080 pixels) resolution but only the OnePlus 8 and X50 Pro support 90Hz high refresh rate.

All three screens have a 20:9 aspect ratio, are certified for HDR10+ playback and have an in-display fingerprint reader.

OnePlus 8, Realme X50 Pro and iQOO 3 are all powered by Qualcomm’s latest and greatest Snapdragon 865 chipset with an octa-core processor, Adreno 650 GPU and built-in 5G support. The new processor offers a 25% bump in performance over the previous generation with a fifth-generation AI Engine and more.

On the other hand, iQOO has a separate 4G and a 5G variant of its phone. The base variant has 8GB RAM and 128GB UFS 3.1 storage followed by a 256GB storage option. The 5G maxed-out version of iQOO 3 has 12GB RAM and 256GB storage.

That said, the daily usage experience offered by all the three phones are different by leaps and bounds. While all three run on forked versions of Android 10, it’s the base-level optimizations that matter in the long run and that is something that OnePlus is known for. The OxygenOS on OnePlus’ phones feels smooth in general use, something that’s lacking on a majority of flagship phones these days. With the latest SD865 chip and OnePlus’ optimizations in place, the performance on OnePlus 8 is only expected to be superior.

On the camera front, OnePlus 8 features a triple camera setup with a 48MP primary camera that uses Sony IMX586 sensor with an f/1.75 aperture and support for EIS and OIS. The second snapper is a 16MP ultra-wide-angle-lens with a 116-degree field-of-view followed by a 2MP macro camera. On the front, there’s a 16MP selfie camera housed within the notch. The rear cameras can do 4K UHD videos at up to 60fps and slow-motion videos at 960fps with support from EIS.

The Realme X50 Pro has a quad-camera setup on the back that consists of a primary 64MP sensor with f/1.8 aperture, a secondary 12MP telephoto lens with 2x optical zoom, an 8MP ultra-wide-angle lens, and a 2MP monochrome sensor. There is a primary 32MP selfie camera on the front supported by an 8MP ultrawide lens. The cameras can record 4K UHD at 30fps with support from EIS.

Similarly, the iQOO 3 also has a quad-camera setup with a 48MP primary camera, a secondary 13MP telephoto lens with 2x optical zoom, a 13MP ultrawide camera, and a 2MP depth sensor. There’s a 16MP selfie camera on the front and the cameras can do 4K UHD videos at up to 60fps.

All three phones have built-in stereo speakers and feature the basic set of connectivity options such as WiFi, Bluetooth, but the iQOO 3 also makes space for a 3.5mm headphone jack.