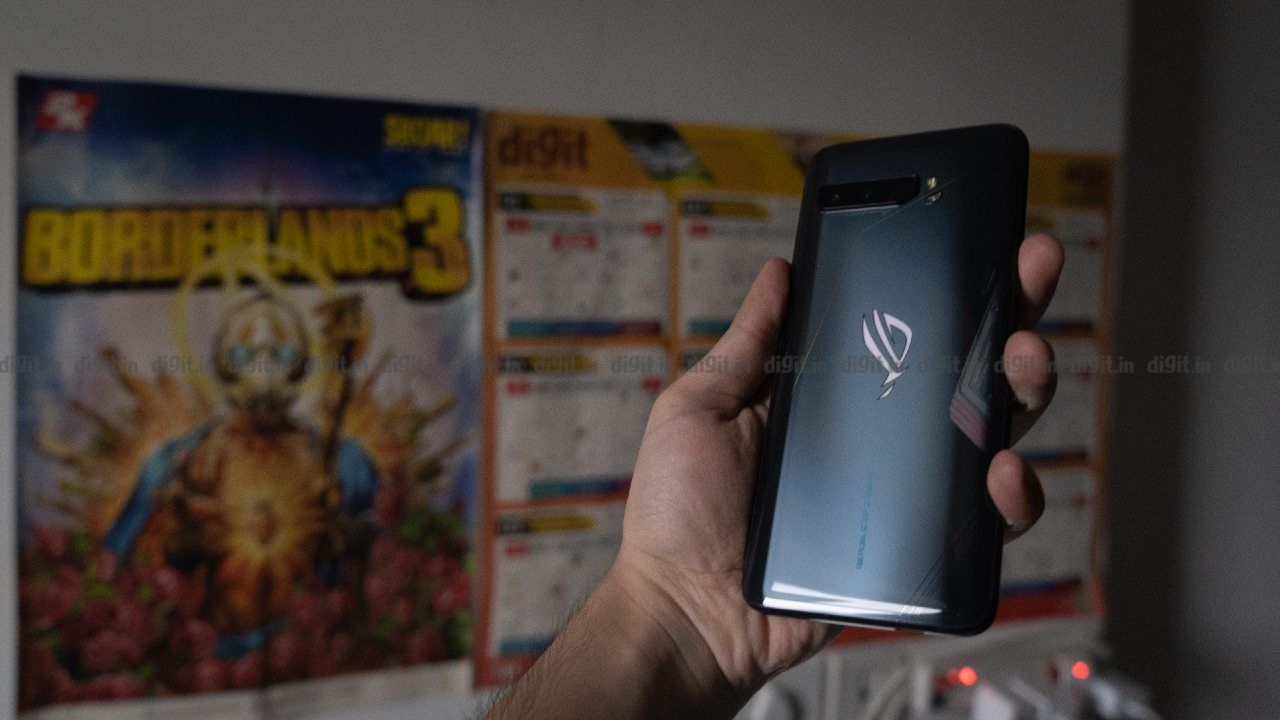 Being a gaming phone for 2020, the ROG Phone 3 comes with all the latest bells and whistles you would normally expect on a premium gaming smartphone. It’s got RGB lighting, a familiar but polished design, state-of-the-art processor to drive home an exceptional gaming performance and a high-density battery that will last hours during your gaming sessions.

Asus ROG Phone 3 is built featuring a metal-glass sandwich design and measures 9.8 millimetres in thickness, weighing in at 240 grams. It features a 6.59-inch Full HD+ (2340 x 1080 pixels) resolution AMOLED screen with a 144Hz high refresh rate and HDR10+ certification. The screen has noticeable bezels on the top and bottom but it’s still a bit narrow than the bezels on the ROG Phone 2. It is also embedded with an in-display fingerprint sensor for fast unlock speeds and is topped with a layer of Gorilla Glass 6.

The Qualcomm Snapdragon 865 Plus chipset lies at the heart of the ROG Phone 3 with an octa-core CPU and Adreno 650 GPU. The Snapdragon 865 Plus processor is the most powerful chipset from the house of Qualcomm as it is overclocked to run at up to 3.1GHz clock speeds with 10 percent graphics boost over the previous generation. This is further paired with upto 12GB RAM LPDDR5 and 256GB UFS 3.1 storage options to choose from. The phone runs on Android 10 based ROG UI out-of-the-box.

The ROG Phone 3 has GameCool 3 aerodynamic cooling system that consists of a larger heatsink than previous geenerations, revamped vapor chamber and a larger graphite film to ensure faster heat dissipation.

The ROG Phone 3 comes with a triple camera setup that consists of a primary 64MP camera with an f/1.8 aperture, a 13MP ultra-wide-angle camera with 125-degree field-of-view and a 5MP macro camera. On the front, there is a 24MP selfie camera with an f/2.0 aperture.  The rear cameras are capable of recording in 8K UHD at 30FPS and 4K UHD at up to 60FPS with support for OIS and EIS.

It also packs in dual front-facing speakers that are supported by dual smart amplifiers to deliver a loud and punchy sound. The phone comes with ROG GameFX audio system that improves in-game sounds and the AudioWizard lets you configure the sound with preset profiles. The ROG Phone 3 also comes with four microphones that are powered by Asus Noise Reduction technology.

For its highlighting feature, Asus ROG Phone 3 comes with AirTrigger 3 that are essentially the shoulder buttons on the right-side edge of the phone and can be mapped with different game controls.

Asus ROG Phone 3 comes equipped with a 6,000mAh battery with support for 30W fast charging out-of-the-box. Asus claims that the phone can go from 0-70 percent in 46 minutes from the bundled HyperCharge adapter.

We will be testing out the ROG Phone 3 in detail for our in-depth review but here are our inital thoughts.