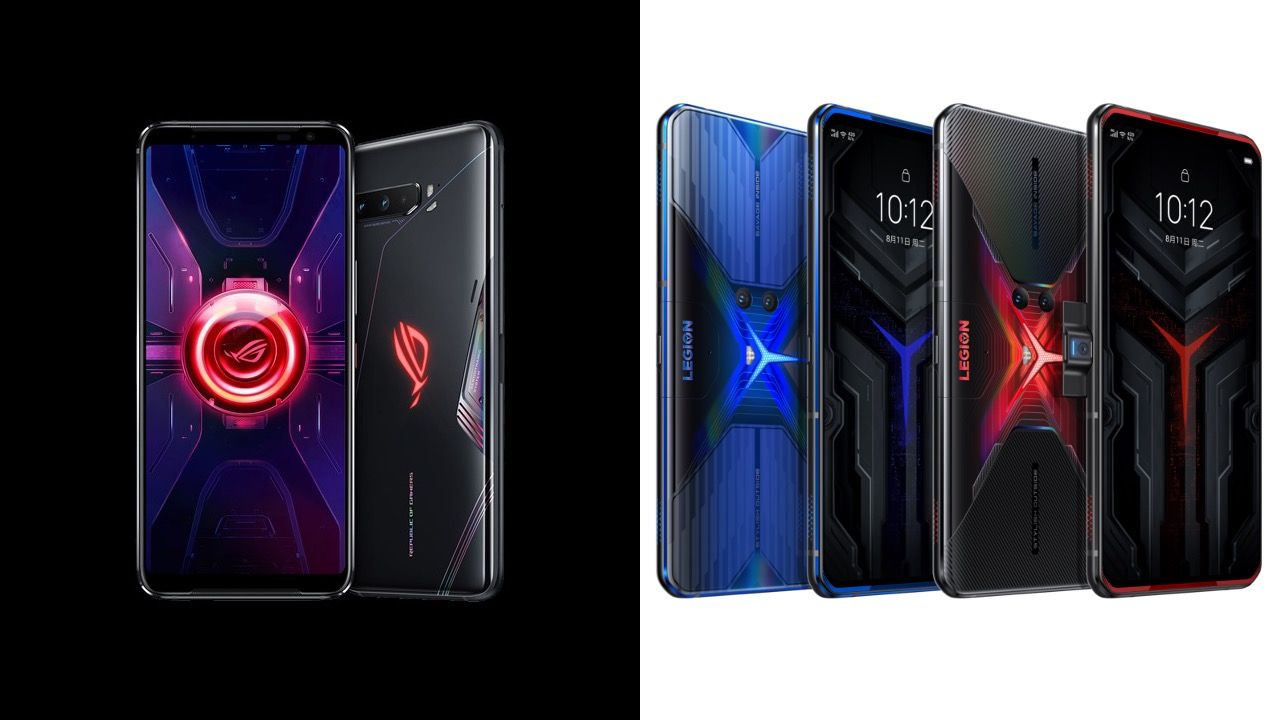 Asus ROG Phone 3 and Lenovo Legion Phone Duel gaming smartphones were launched just hours apart from each other and are the latest gaming smartphones on the block. While its Lenovo’s debut in the mobile phone gaming segment, the ROG Phone 3 is the company’s third iteration in creating a supreme gaming phone.

The two phones are equipped with RGB lighting on the rear panel under the logos and the colours can be customised from a pre-installed app. The phones don’t come with 3.5mm audio jack but have two USB Type-C ports, one for charging and other for attaching accessories.

The ROG Phone 3 features a 6.59-inch Full HD+ (2340 x 1080 pixels) resolution AMOLED screen with a 144Hz high-refresh-rate and is HDR10+ certified as well. Lenovo’s Legion gaming phone, on the other hand, comes with the same 6.59-inch Full HD+ display with 144Hz refresh rate. The screen on the ROG Phone 3 is topped by a layer of Gorilla Glass 6 for added protection but the Legion Phone Duel misses out on any kind of additional protection.

Overall, both the phones have more or less similar display sizes but the design is a differentiating part. While the Asus ROG Phone 3 goes for a more elegant and clean look, the Legion Phone Duel has two distinct patterns on the rear panel with the Legion logo in between which screams “gaming” from the get-go.

Both the phones are powered by Snapdragon 865 Plus chipset which is the most powerful processor offered by Qualcomm and are paired with LPDDR5 RAM and UFS 3.1 storage options. The Snapdragon 865 Plus chipset comes with an overclocked octa-core CPU that is capable of running at 3.1GHz clock speeds and up to 10 percent faster graphics performance. It also comes with a host of Snapdragon Elite Gaming features like support for HDR gameplay, high-refresh rates and more.

While we cannot really determine the actual real-life performance of both the devices just yet, the Qualcomm Snapdragon 865 Plus chip that lies at the heart of both the phones are capable of powering through any and all graphic-intensive games. The ROG Phone 3 runs on the ROG UI which is based on Android 10 while the Legion Phone Duel runs on LegionOS out-of-the-box.

The gaming experience between both the phones is different on the basis of the optimizations in place to improve the performance of the phone while gaming for long hours at a stretch.

We will be testing out the ROG Phone 3 in detail for our full review and the Legion Phone Duel for when it arrives in India sometime later this year.

Asus ROG Phone 3 comes with a triple camera setup that consists of a primary 64MP camera with an f/1.8 aperture, a 13MP ultra-wide-angle camera with 125-degree field-of-view and a 5MP macro camera. On the front, there is a 24MP selfie camera with an f/2.0 aperture.  The rear cameras are capable of recording in 8K UHD at 30FPS and 4K UHD at up to 60FPS with support for OIS and EIS.

The Lenovo Legion Phone Duel has a dual-camera setup on the back that consists of a primary 64MP camera with an f/1.8 aperture and a 16MP ultra-wide-angle camera with a 120-degree field-of-view. It has a selfie camera on the front but it is side-mounted in a pop-up mechanism.

We will be testing out the cameras on both the phones in detail for our review and will be sure to pit it against the Legion Phone Duel when it launches in India.