Apple iPhone X had an embarrassing moment on its first show

The iPhone X foregoes the fingerprint sensor with a Face ID unlock feature. But Apple may have some unwanted questions to answer.

Did that just happen? Apple’s big keynote of the year had one big embarrassing moment this time, and though the company’s recent events have been far from perfect, this is one that Apple will really care about. Or will it? Only time will tell.

Either way, it went like this. Tim Cook came on stage and said there’s “one more thing” to come, unveiling the much rumoured iPhone X. Phil Schiller then confirmed everything that leaks had been telling us over the past year. Then, he called Craig Federighi on stage, who was really excited to give us all a demo of the new iPhone X. What happened next?

You see, the “futuristic” face unlock feature on the iPhone X, which can be beaten once in a million times, according to Apple, refused to work on stage. Undeterred, Federighi tried again, putting up a brave face even though Apple’s prized new feature had just seemingly failed the company. His second attempt bore the same fruit and left without any other options, the iPhone X asked Federighi to unlock using the outdated pin-code mechanism. Who uses pin codes anymore, right?

Well, it's worth noting that this can't actually be counted as a failure. If you look close at Apple's demo, the iPhone X is telling Federighi that his passcode is needed to unlock Face ID. Apple's devices do this if they've been restarted, so it's possible that whoever was in-charge of placing the phones on stage, had just powered them up before putting them there. So, it's likely that Face ID didn't fail at all in the first place, and this is simply a ghastly mistake that Apple will likely get over easily, while the world wonders what happened. 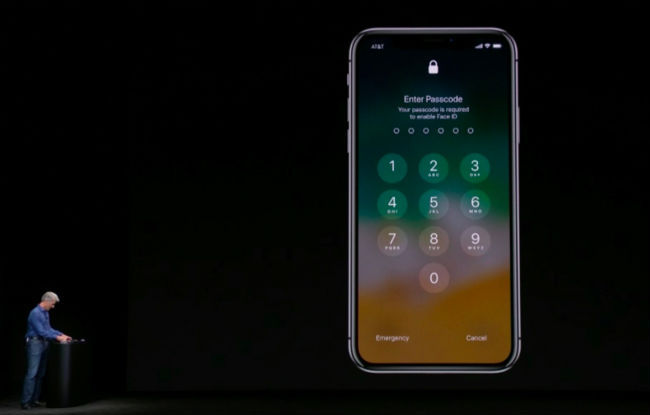 It's easy to equate this with the mishap Faraday Future suffered on stage, but unlike that self-driving car, this is almost certainly not a real failure.

You see, Apple’s product demos are known to be beautiful, smooth and most importantly, near perfect. The face unlock demo was at the top of Federighi’s demonstration, meaning the abberation was noted by pretty much every journalist and Apple employee in attendance, not to mention the scores of fans watching the company’s livestream worldwide, us included.

But, to take a page out of Apple’s playbook, there’s “one more” reason why this is so important. Face unlock for smartphones is neither being done the first time, nor has it failed the first time. Many of Apple’s competitors, including Samsung, have tried it and failed. Face unlock hasn’t worked well in practical conditions, and Federighi’s demo would have skeptics on fire right now.

From our experience with smartphones, literally no face-unlock feature has worked as a replacement to the fingerprint sensor so far. Apple’s explanation of how its technology works was geeky and interesting indeed, but it wouldn't convince skeptics just yet. Simply put, Federighi’s bad luck may have been a one off, but if Face ID is to replace the fingerprint scanner (which is what Apple is trying to do), it has to be failure proof. Hopefully for Apple, that's how it is.