The charger is expected to be bundled with the upcoming Galaxy Note 10 Series.

There are several reports that mention that Samsung is expected to bundle a 45W charger with the upcoming Galaxy Note 10 Series of phones. In the latest development, the charger was spotted on display at the recently concluded MWC Shanghai. A blogger shared an image of the charger on his personal Weibo account. In the image, we can see a glass box enclosing a motherboard with a number of processors. The glass box reads “45W PD solution collaborated with Power Integrations,” confirming that the South Korean giant has been developing a powerful charging solution as it was rumoured.

As mentioned, the charger could be bundled with the Galaxy Note 10 series of phones. According to a report, Samsung could launch four devices under the series: the Note10 and the Note 10 Pro (or Galaxy Note 10+), and 5G variants of both. Samsung has sent out press invites confirming that it would unveil its second flagship devices at an ‘Unpacked’ event at 4PM ET on August 7 (at 1:30AM IST on August 8) at the Barclays Center in Brooklyn, New York. 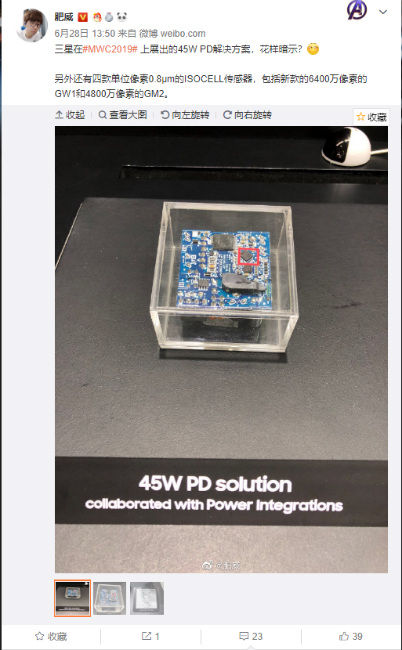 The striking difference between these two devices is said to be the display size. It is speculated that the Galaxy Note 10 will sport a 6.4-inch Dynamic AMOLED display, the ‘Plus’ variant could ship with a 6.8-inch Dynamic AMOLED panel. On the battery front, it is reported that the device will pack a 4170mAh battery. Under the hood, the phones are likely to be equipped with the indigenously developed Exynos 9875 chipset (or the Qualcomm Snapdragon 855 chipset for some markets) coupled with up to 12GB RAM and up to 1TB of storage.

Reports suggest that the South Korean tech company will incorporate a triple aperture camera setup with f/1.5, f/1.8, and f/2.4 apertures. The primary lens will be able to switch between the three apertures to give users control over the depth of field, and the amount of light entering the lens. The lens is said to be accompanied by a telephoto, and an ultra-wide lens. Additionally, the Note 10+ is expected to add a fourth Time of Flight sensor.