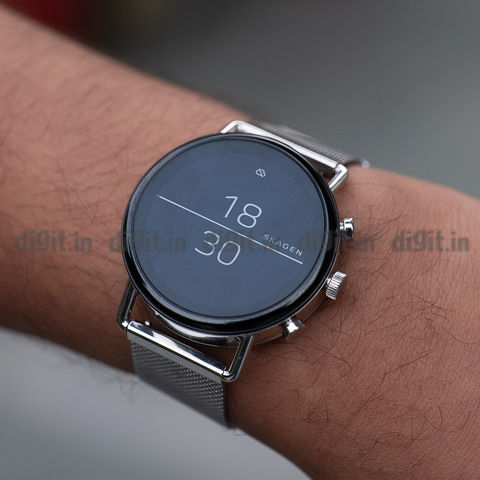 Skagen is a Danish brand that makes watches and is now part of the Fossil group. Recently, despite the smartwatch market having plateaued, companies are continuing to launch new models in this segment. The Falster 2 is Skagen’s entry into the smartwatch portfolio and in case its something that’s caught your eye at a local store, you may want to take a closer look and here’s why.

The Skagen Falster 2 can be broken down into two distinct parts, the dial and the straps. The dial is a smooth, round thing with a crown on the right side. The crown is flanked by two buttons that help you navigate the various features of the Falster 2. The glass and metal construction is what’s visible to you (and the world) but what’s not visible is the underside. The underside has a standard plastic shell which houses the heart-rate sensor. 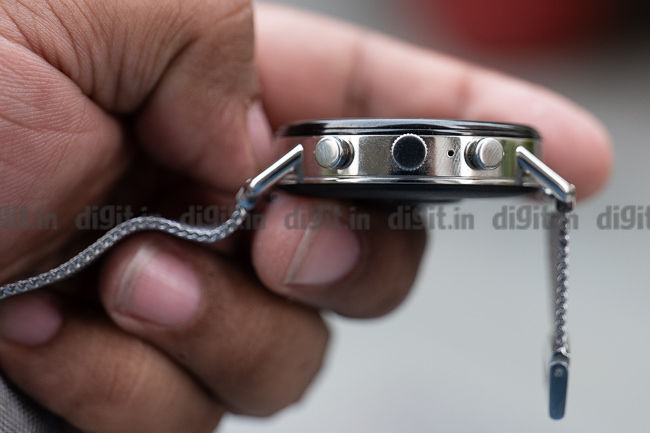 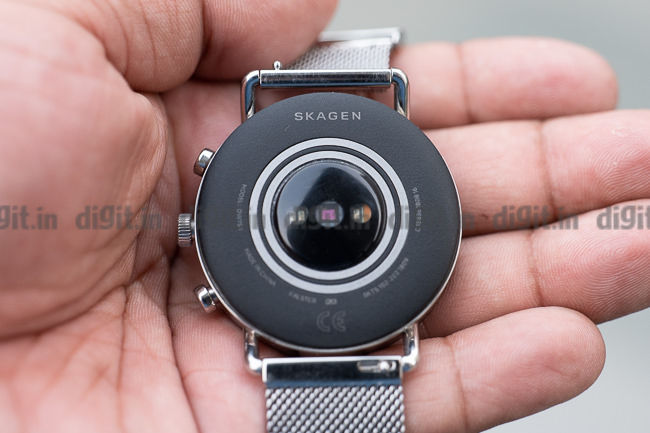 The strap is a close replica of the Milanese loop strap that was popularized by Apple for the Apple Watch, but it is a very nice strap. The strap locks into place using a strong magnet and stays in place rather well. I had initially feared that during my use of the Falster 2, the strap would keep coming loose, but thankfully, that turned out to not be the case. The other concern I initially had was with regards to the length of the strap itself. It felt like it wouldn’t be long enough to wrap around my wrist enough to create a secure fit, and that was partially true. After looping the strap, only about an inch and a half was left to lock in place, but the magnet was strong enough to hold the watch in place. The reason this was initially a concern is because Skagen does not include a longer replacement strap in the box. People who have beefier hands will definitely find the strap to be on the shorter side. Finding a larger strap may be a challenge, so make sure to try the watch out before you buy it.

The Skagen Falster 2 is built on Google’s WearOS and hence, comes with the standard suite of smart features. You get the regular suite of activity tracking, including a whole host of workouts. There’s sleep tracking as well which is offered by WearOS and supported by the watch’s hardware.

Where the Skagen Falster 2 excels is in becoming a wrist-worn companion for your smartphone. The watch, once paired, will give you all relevant notifications right on your wrist. For example, WhatsApp messages were easy to read on the watch, with the ability to scroll through easily. Responding to the messages was rather limited though, with the interface only offering very rudimentary responses such as “ok” “thanks” “yes” etc.

The Skagen Falster 2 also supports Google Assistant, but we felt the accuracy of the Assistant picking up the voice commands was a hit or miss. What did work well was controlling music through the watch, which is convenient if you’ve got your phone plugged into a speaker set and are sitting far away from it. There is a miniscule delay in the changing of tracks, but its not something that ruins the experience.

We tested the Skagen Falster 2 during a recent trip abroad which involved excessive amounts of walking. For good measure, we also wore a FitBit Ionic to see just how close the numbers would be. In our review of the Ionic, we found the numbers from the watch to be fairly accurate, allowing us to use it as a good enough reference point. 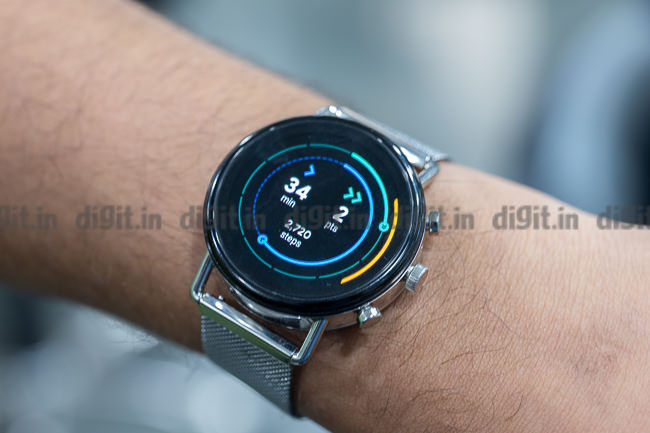 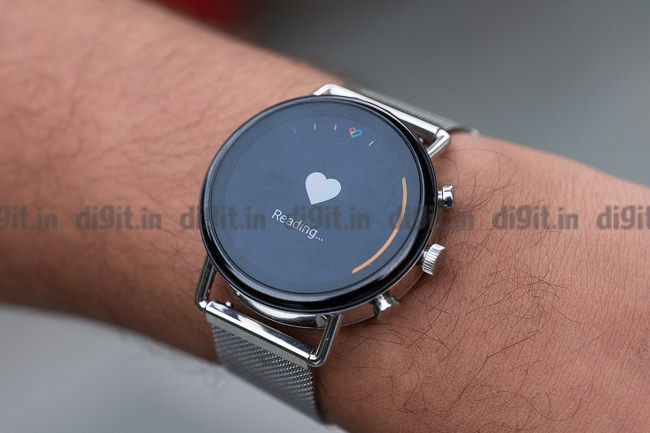 When compared to the statistics recorded by the FitBit Ionic and the Skagen Falster 2, there is a difference of roughly 200 steps, which isn't a lot. Fitbit generally has some of the best step tracking in the business and for the Falster 2 to so closely match the Ionic's performance is pretty commendable. 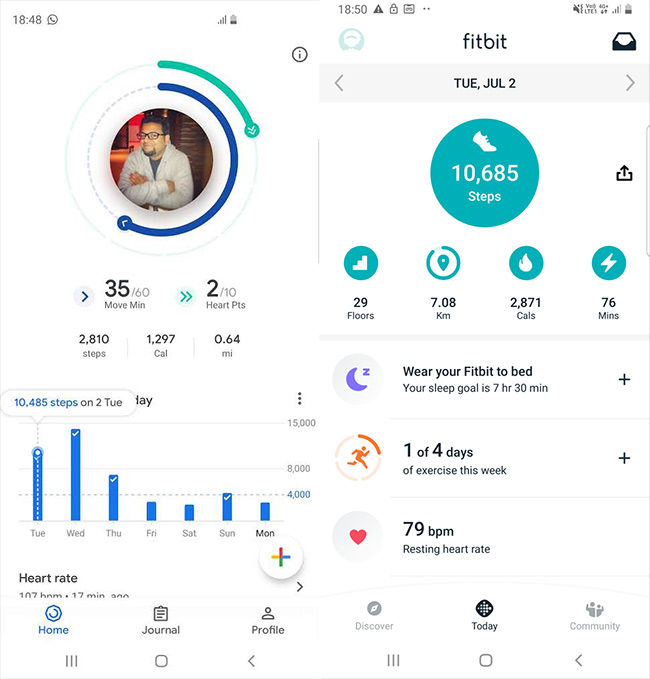 The second aspect the Falster 2 can track is sleep. Sleep is as important in a person’s fitness regime as is working out. Wearing the watch to bed is where we found the magnetic latch of the steel mesh strap to finally give in. In the nights we wore the watch to bed, it was unsuccessful in tracking any sleep activity due to constantly moving around, so we wouldn’t really recommend this watch for sleep tracking.

When it comes to tracking workouts, the Skagen Falster 2 falters due to its insecure strap. The magnet may be strong enough to hold the watch in place while walking and maybe jogging, but it is definitely not strong enough to keep it in place during intense workouts. Besides, it’s unlikely you would want to wear a metal watch during your HIIT workouts.

The Skagen Falster 2 uses a very familiar magnetic charger to push juice into its tiny 300mAh battery. Charging it takes about an hour while the watch lasts just about a day’s use in normal use. During my travels, I would have to charge the watch every night, so sleep tracking was out of the question anyway. The good thing, however is that since the watch takes little time to charge back up, you can always top off the battery using a battery pack if in a pinch.

The Skagen Falster 2 cost Rs 21995 and just like the Armani Exchange Connected smartwatch, is more about form than function. This isn’t to say that it doesn’t live up to its smartwatch moniker. In fact, it does the “smart” thing rather well, its just the limited use in terms of fitness tracking where the watch falters a bit. If you want something that’s trendy looking, wont get uncomfortable after long hours of use and will deliver all your notifications in a reliable fashion, then the Skagen Falster 2 is a decent contender for your money. However, if you’re looking for something that’s primarily geared towards fitness tracking, you may want to look elsewhere, perhaps at the FitBit Ionic.