Battletoads review: Decent beat ‘em up, warts and all

Beat ‘em ups were one of my favourite genres back in the days of 8-bit gaming. Most likely because it was one of the few genres that my brother and I could play together without us getting into a fight (which I tended to lose as he was six years older). As such, I have very fond memories of playing beat em’ ups like Teenage Mutant Ninja Turtles: The Arcade Game, Double Dragon II, and Mustapha (I refuse to call it by its actual name of Cadillacs and Dinosaurs).

Unfortunately, I never had the chance to play the original Battletoads games on the NES. Partly because Nintendo didn’t (and still hasn’t) entered India officially and also because I had never heard of them.

Fast forward to the present and things have changed quite a bit. The beat ‘em up genre is no longer that popular and the Battletoads name has been lying dormant for 26 years. Probably older than many people reading this. But the guys over at Dlala Studios and Rare have revived the franchise. But was it worth it?

The story is as basic as you can expect from a beat ‘em up, but credit to Rare for making it interesting. Simply put, the titular toads, Zitz, Pimple and Rash find out they have been living inside a simulation for 26 years and aren’t really famous or popular. So they embark upon a quest to become famous and relevant once again. That’s pretty much all you need to know when it comes to a beat ‘em up. 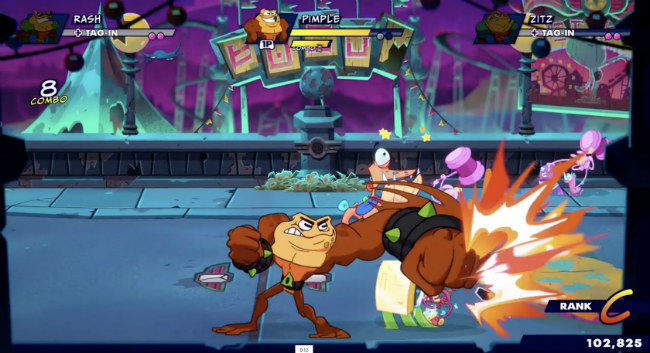 The art style seems to be pretty similar to cartoons like Teen Titans Go! With colourful stages that really pop. While key characters like the Battletoads and Dark Queen are properly animated, most of the enemies seem to be a mish-mash of random shapes. That sometimes creates a bit of a problem when the action becomes hectic and you can’t figure out what’s going on. Especially when playing co-op as there are more people on screen. For example, when playing co-op on the hoverbike section, I found it much easier for one player to kill themselves as quickly as possible so that the other player can get a clear view of the obstacles.

The original Battletoads games gained a cult following thanks to its notorious difficulty and the infamous hoverbike level (Turbo Tunnel) which is considered by many to be one of the most difficult levels in gaming. The new Battletoads game may not be as difficult, but it certainly is no pushover. The gameplay is pretty much standard beat 'em up fare. Enemies appear and then it’s up to you to beat them and then move to the next location where the process is repeated. All three toads are different. Pimple is the strongest of the Toads, but he is the slowest. Zitz is the fastest, but his attacks do the least damage, while Rash offers a decent balance between the two. Players can swap between the three Toads at any time, provided they aren’t controlled by another player. 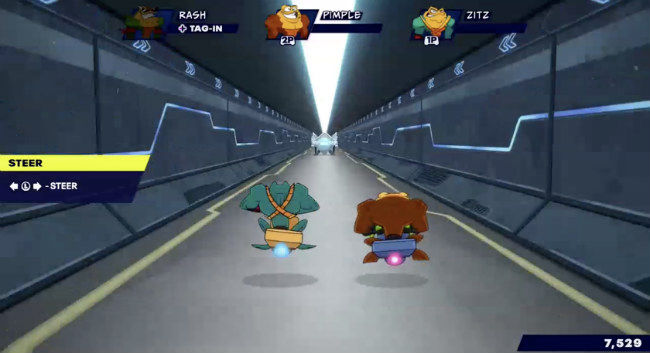 Attacks consist of a standard punch, a launcher attack that launches enemies into the air, and a charged attack called a ‘morph’ attack. When you die, a toad automatically gets tagged in. If all toads die, you restart from a checkpoint. Thankfully, the game is generous with its checkpoints and the load times are minimal.

Battletoads is also not shy when it comes to mixing up gameplay. Besides a competent beat ‘em up, players will also get to play some other genres like platformers, bullet-hell shooters, puzzles, and even rock-paper-scissors. There is also the classic hoverbike level that makes a comeback. However, this time around, the level is much more forgiving thanks to an over-the-shoulder view. But do know that ‘forgiving’ does not equal easy. Honestly speaking, there were multiple times where I contemplated giving up the review out of frustration (maybe I’m just that old), but the generous checkpoints and quick load times made me stay. It hits that very sweet balance of ‘tough-but-fair’. However, my biggest gripe is that while these levels are a nice change of pace, they tend to overstay their welcome after a while.

Overall, the game is about four to five hours long. It should also be noted that the game offers a 3-player couch co-op option. But no online co-op mode. A pretty big oversight considering that it is 2020 and we can’t just pop over to a friend’s place to game. 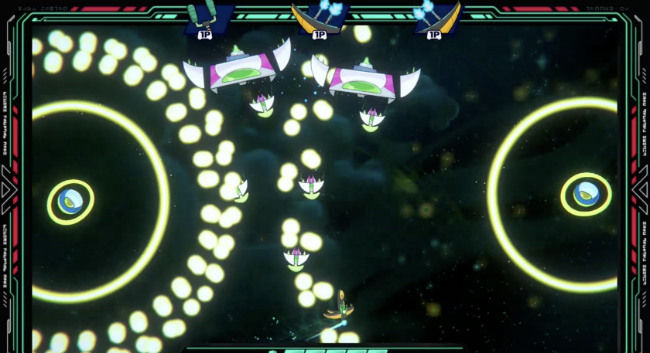 The controls in Battletoads seem unnecessarily complicated. The left stick moves you around and you get your standard jump and attack buttons. But then it seems like the developers tried to rope in as much as possible. There is a separate button for a ‘morph’ attack, which is a charged attack that is meant to cancel enemies that block and a separate attack for launching enemies into the air.

That’s not all. In order to pick up items, you hold down the Left Trigger that activates a sort of ‘aiming’ mode. Now you press the Y button to grab items with your tongue (because toads). However, pressing X when in aiming mode will grab enemies instead. Pressing A when aiming will launch bubble gum at enemies which sticks them in place.

We’re not done yet. Pressing the Right Trigger and a direction will make the player dash a short distance, thereby avoiding an attack. Three of the directions on the D-Pad are used to tag in a corresponding toad while the fourth direction grants temporary invincibility. The Right Stick is used to taunt. 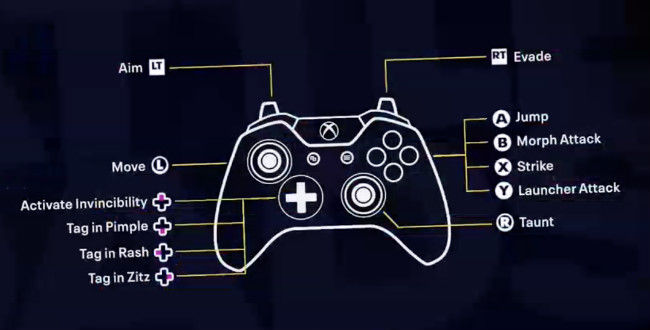 These controls make things seem complicated for no reason. For example, the controls to pick up items should have been just one button, maybe just the attack button, or better still, the characters should be able to pick up items just by touching them.

While the controls are complicated, it's sad that the action isn’t. While all three toads have unique attacks, it's pretty much the same set of punches and kicks. I wish that there was some more diversity with grapples, throws, weapons, and team attacks.

It’s funny to think that older beat ‘em ups managed to offer the same basic level of gameplay with less complicated controls. Maybe Rare should have also taken inspiration from a game like Cuphead which not only offers challenging levels and is punishingly difficult, but has controls that are easy to learn.

The audio is the game is pretty much par for the course. Accompanying the action is usually a nice heavy metal guitar riff which makes complete sense considering the title got its beginnings in the ‘rad’ 90s. As far as sound effects go, they are pretty good too, with punches and crashes sounding meaty. The dialogue and humour are also on point with some cutscenes bringing a slight smile to my face. In fact, the cutscenes seemed to be ripped out straight from a modern cartoon. 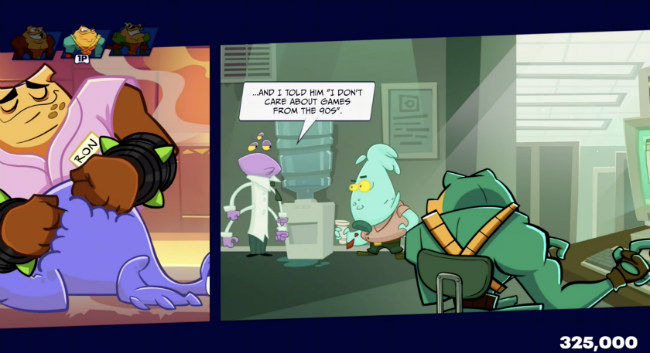 Giving a verdict to the new Battletoads game is a bit of toughie. I am a sucker for nostalgia and the game’s ‘what will happen next?’ style of gameplay offers oodles of it. Add to it the hand-drawn animation style and decent humour, and this should have been the perfect co-op game for me. However, the overly complicated controls and game modes that overstay their welcome make it tough to like. Overall, I think Battletoads is an OK game that is reasonably fun to play co-op, warts and all. Especially considering that the game is free for Game Pass subscribers. However, those looking for a more fleshed out and modern beat ‘em up experience should turn to Streets of Rage 4, while those on the hunt for nostalgia should opt for Capcom’s Beat ‘em Up Bundle. 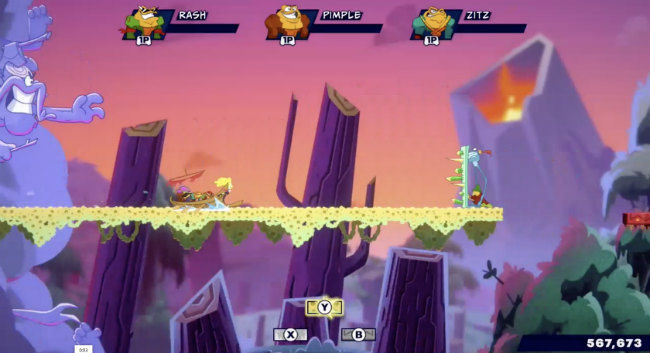 We played a review copy of Battletoads on an Xbox One

OPPO F17: Youthful exuberance in a smartphone Previous Post
How to make your iPhone run faster. Next Post