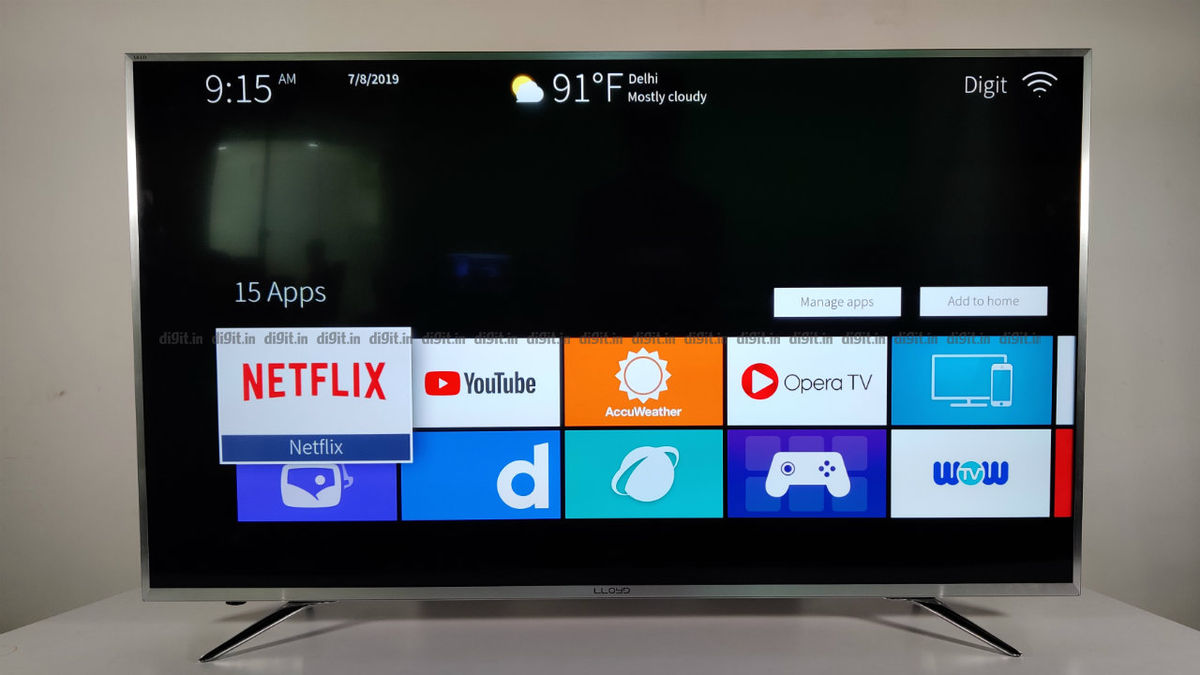 The Lloyd ULED TV brings with it a good design, plenty of connectivity options, good 1080p performance. Where it lacks is in the UI and smart features, range of streaming services, and HDR performance for the price.

There are a lot of good TVs available at the 60K price point for those looking for a 55-inch TV sporting a good display panel, feature-rich UI and a multifunctional remote control. Crossing the 60K price point would mean that you are diving into a premium category of TVs. Expectations from TVs at this price range are high. The display needs to have impressive picture performance and the UI needs to be impressive enough that a user does not need to resort to a device like the Fire TV Stick.

Today we have with us the Lloyd 55-inch ULED TV. The TV has a 55-inch 4K panel with HDR support, a host of connectivity options and a custom UI. Is it worth the asking price of Rs 95,000?

Specifications at a glance

Kicking things off with the design of the Lloyd 55-inch 4K TV, it has a gunmetal bezel around the TV that has a matte finish. The feet are silver and have a glossy finish. In a day and age where TVs have a minimalistic black design, the gunmetal and silver colour makes the TV stand out in a nice way when kept on a tabletop. The feet of the TV are quite reflective when placed in a brightly lit room and can get a little distracting, but I’m just nitpicking here. The gunmetal borders around the TV may be distracting for some, but I appreciate this style. The TV feels premium too with its build. The feet are made of metal, and the bezels exhibit no form of flex whatsoever. 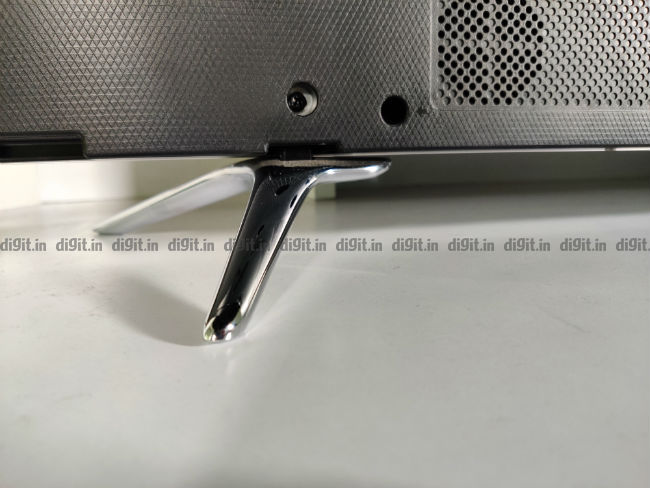 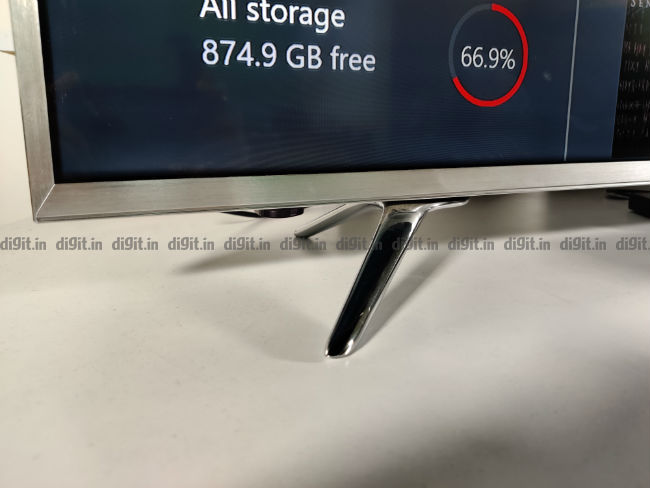 On the back, the TV has the same setup we’ve seen many times before. You have all the connectivity options neatly laid out on one side. Facing the side we have the antenna port, 3 USB ports, 2 HDMI ports (one of which is ARC enabled), a service port, and headphones out. Facing the rear we have the ethernet port, optical out port, 2 HDMI ports and 2 AV in ports. Overall, the connectivity ports on the TV are plenty and should cater to most users' needs. 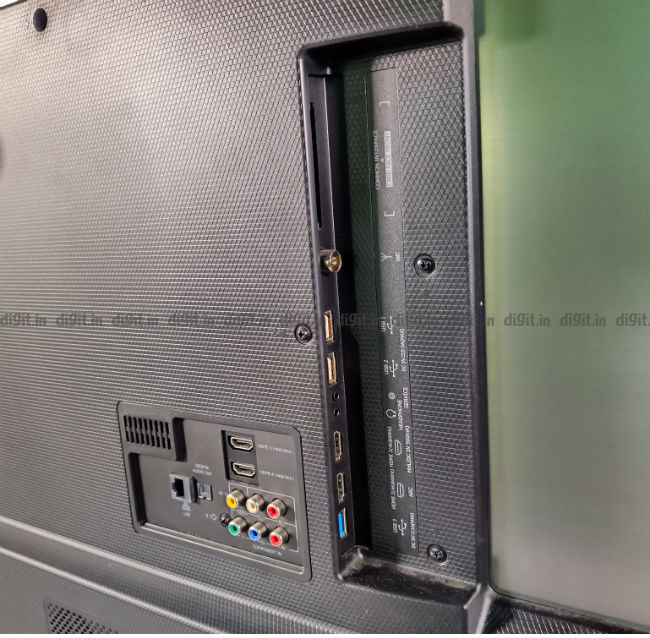 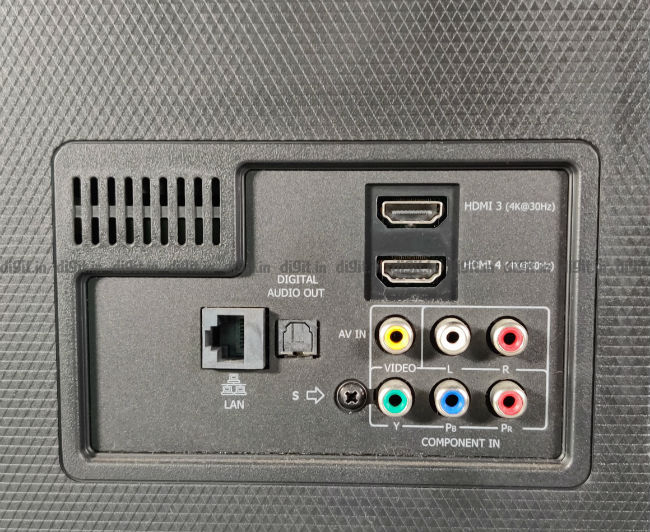 Overall, the build of the TV feels sturdy, the design is elegant and the connectivity options, enough to cater to your needs.

The Lloyd 55-inch 4K TV has a 10-bit VA panel. Thanks to the 10-bit panel, the TV boasts of 4K capabilities along with HDR support. The company claims the TV has a brightness of 420 nits which a lot higher than the 350 we have seen on some TVs with a lower price point. This is good as it helps the TV deliver brighter images. More on this in a bit. Below we will highlight the performance of the TV using three types of content - 4K, HDR, 1080p and gaming content. 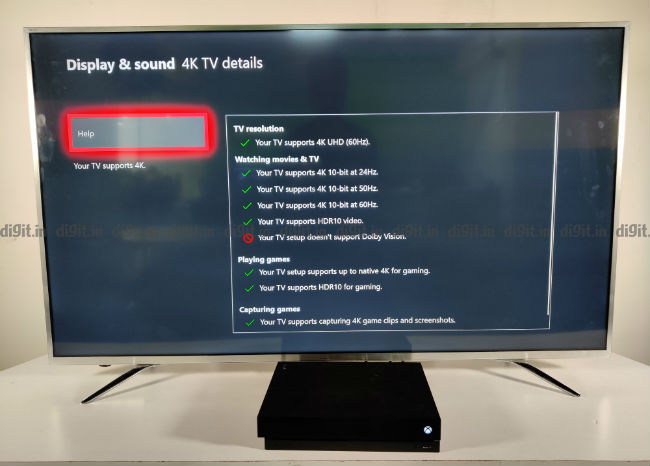 We used the built-in Netflix app to play some 4K and HDR content. There is a scene in Altered Carbon Season 1 Episode 7 where there is a fight scene in a warehouse. Let’s use our 2019 benchmark TV, the Sony X95G (read our review here). This is a 2.5L-rupee TV so it isn't an apple-to-apple comparison but it should give you an idea of the Lloyd TVs performance. On the Sony TV, even the dark portions of this fight sequence were very well visible in a relatively bright room. The muzzle flash from the gun spread light in its immediate vicinity very well. On the Lloyd, TV this experience was a little lacking. The bright sequences in this fight sequence were quite enjoyable but when it shifts to dark, it loses its charm. 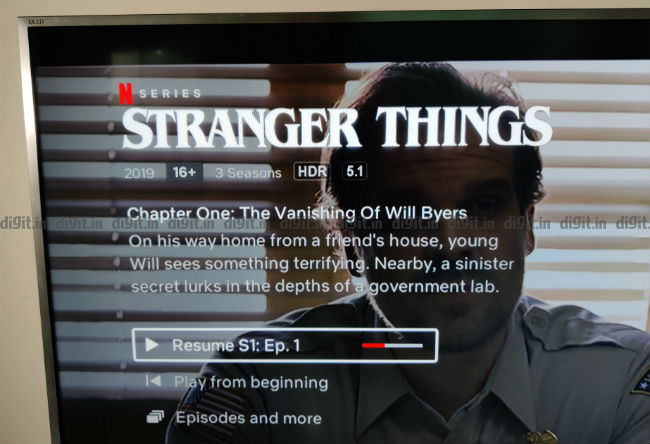 Same for the Daredevil Season 2 Episode 3 staircase fight sequence. It is darker than we’d like. We tried to tweak the HDR settings available and found that the “dynamic” HDR setting was the best for consuming content. The backlighting is 100 percent by default in the HDR setting. You can play around with other settings like colour and saturation to get the settings to your liking.

This is where things get interesting. A game like Doom, which is in 4K and SDR, looks slightly weird on the TV. The planet of Mars has an orange surface but the orange is slightly less saturated. On the Lloyd TV, using the standard preset, it looked very oversaturated and on the Game mode setting it looked a little too brown. One has to switch off the HDMI 2.0 standard setting of the TV to get the SDR colours to look a little better, but it still looks far from what it should. Surprisingly, the indoor environments look like they should - industrial metal meets science lab. 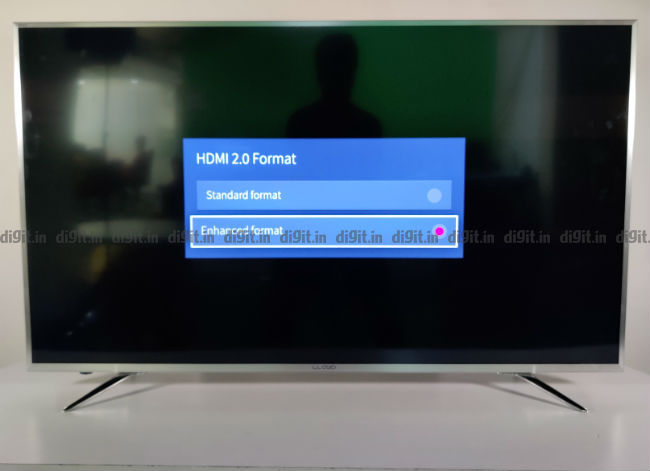 A game like Gears of War 4, on the other hand, looked very good. The HDR settings of the game work unlike most budget HDR TVs we've tested and the game overall looks impressive. From the dark shadows of corridors to bright open environments and even the character models, everything looks impressive. You may want to change the picture setting between HDR game and HDR Dynamic to get the best visual output. 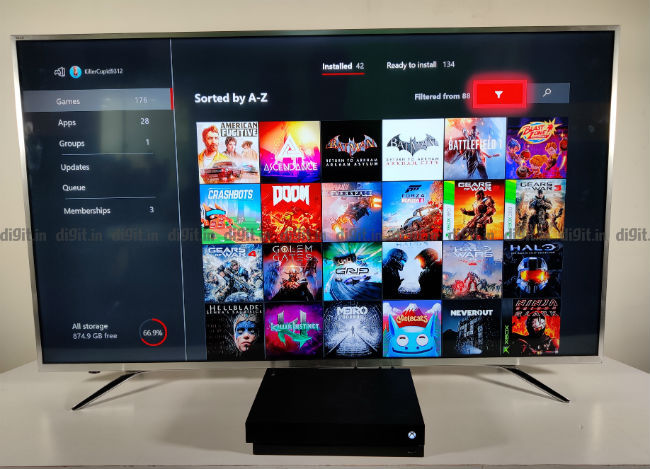 The audio of the TV is quite flat, lacking bass. The audio works for everyday viewing especially news and even shows like Young Sheldon or any soap opera where vocals are important. For a movie and gaming experience, I suggest you invest in a soundbar.

This is where things get a tad disappointing. As we mentioned above, the TV runs on a custom Linux UI and the library of the app feels limited. There is no access to Hotstar or Prime Videos but the TV does have the TV version of the Netflix app, which can represent content in 4K and HDR which is nice. The UI, though simple, lacks the complexities and depth of functionalities found on Android, Tizen or WebOS. Sure, you can cast from your smartphone, and tweak your display settings but the library of the app is not as polished as the ones found on Android TV-powered smart TVs. The lack of apps like Hotstar and Prime Videos is a bummer. 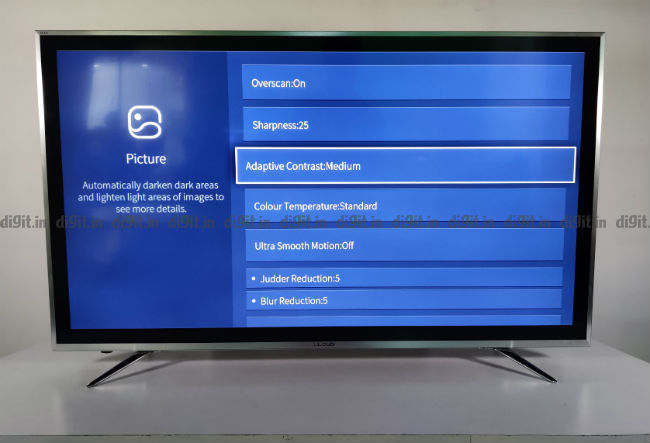 The UI has a bit of a learning curve. For example, pressing the home button brings up a horizontal bar which houses options like Notifications, Apps, Live TV, Media, etc. Clicking Apps brings up the library of apps installed and the app store. There is a button at the bottom left of the remote control which brings up the apps view. One would think that pressing the home button brings up the apps menu and this can get a little confusing when using the TV for the first time. There are dedicated buttons for YouTube and Netflix on the remote control, which is nice. 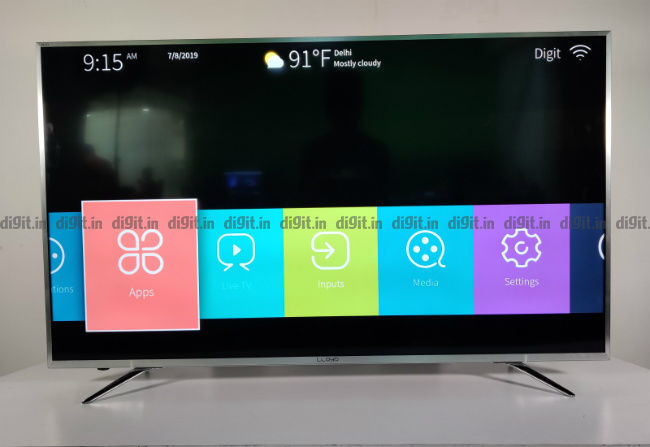 Overall the UI is functional, smooth and gets the job done. The lacklustre apps library leaves us desiring more.

One good thing about the remote control is that you don't need to point it directly to the TV to get it to work. The remote has a plastic construction and a candybar form factor. The remote has the same glossy silver border all around, the same as the tabletop feet of the TV and it adds a nice touch to the remote control. Till now we have seen matte-finished simple remotes and I like the little silver bling on this one. The button placement is pretty standard with the number pad on top, below which rests the directional buttons along with channel and volume controls and the bottom has the dedicated media streaming and apps button. 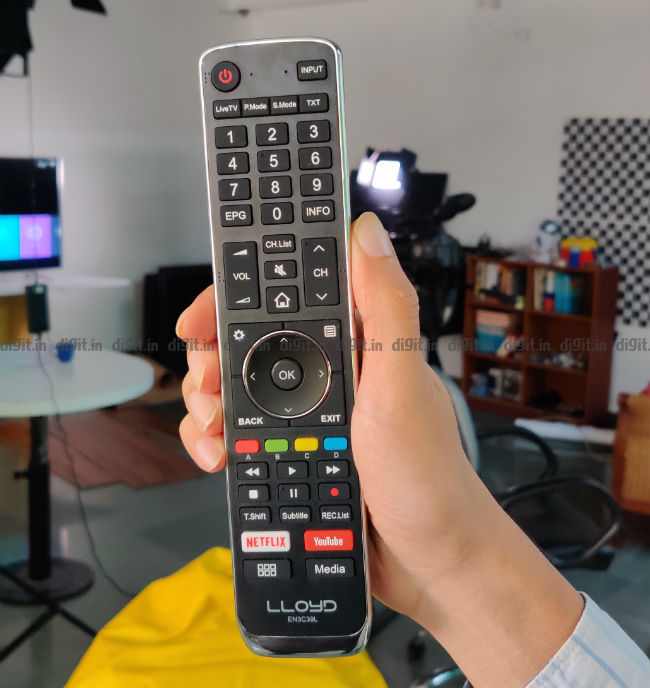 It’s hard to recommend the Lloyd ULD TV, not because it's bad, but because we haven't tested some of the TVs in the 60 to 90k price range. There are offerings from Sony, Samsung, Panasonic and LG in this price range and most of them exhibit a better UI but we can't comment on their panel performance. The Lloyd TV brings with it good 4K and FHD performance, the TV version of the Netflix app, unlike some TVs. It also has deep settings customisation options and good design. Where it lacks is in HDR performance and the UI.