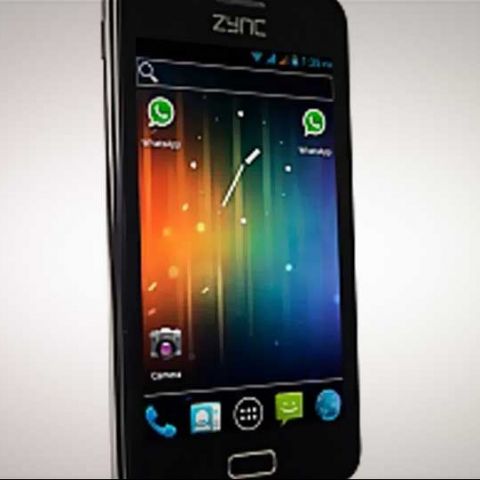 The Zync Cloud Z5 is a promising device as a budget 5-inch device. For Rs. 9,000, you are getting a smartphone-tablet hybrid that has decent performance as a phone and a multimedia device. If you want an IPS display, you can take a look at the iBall Andi 5c. But as of now there are only a few options available in the budget phablet category. If you are desperate to pick one up, you can go for either, depending on your budget. But weï¿½d suggest that you hang on to your cash for a bit longer until this category gets populated with a few more options.

The phablet as a device has found the sweet spot between a traditional smartphone and a 7-inch tablet. This space wasn’t always successful though. The Dell Streak was the pioneer in this category and the device really didn't take off.
In 2011, Samsung took a bold step and reignited the category with the launch of the Galaxy Note. The device did well enough not only to get Samsung to launch the Note II in 2012, but also paved the way for a phablet market.

We have seen a few phablets try and take on the Note II. Some of the competition includes the LG Optimus Vu and the HTC Droid DNA (J Butterfly). The fact still remains that all of these devices are premium priced.

But that didn't remain the case for long. Recently, many manufacturers have introduced low-cost phablet devices. We some hands on time with the iBall Andi 5c (read our review) and as a budget smartphone-tablet hybrid, the device performed reasonably. Today we have with us the Zync Cloud Z5, another entry in the budget phablet market. Is this device worth a glance, or are you better off going in for a premium phablet?

Build and Design
It’s well said that to be the best, you need to first copy the best and this fact is very well visible with the Zync Cloud Z5. One look at the device and you would be forgiven for thinking that it is a Samsung Galaxy Note N7000 (the first generation Galaxy Note).

On the face the Cloud Z5 has a 5-inch display that is quite big. It’s clear that Zync doesn't want you to mistake this device as the Galaxy Note as there is “Zync” clearly written below the earpiece. Below the display is the physical home button that also doubles up as the multitasking button. To the left of this button is the capacitive menu button and to the right rests a capacitive back button. Very Samsung Galaxy Note-like!

The rear of the Cloud Z5 has the same matte textured black finish that is found on the Note and that isn’t a bad thing since the Note was a very well-built device. The rear panel too has the Zync branding imprinted on it. The bottom of the rear panel houses the mono loud speaker. To the left of the device we have the on/off/sleep/wake button where as to the right we have the volume rocker. The bottom houses the microUSB port that is used for charging as well as data transfer. The top of the device has the headphones jack.

The Zync Cloud Z5 isn’t too heavy (for its size) at 165gms and feels surprisingly well built for a sub-Rs. 9,000 device. It has taken design cues from an already successful device so there isn’t much we can crib about there. Its only flaw is a generic one to the category, that it is too big to conveniently carry in one’s jeans pocket.

Features and Specifications
To start with the specifications, the Zync Cloud Z5 has a 5-inch TFT LCD apacitive touchscreen display with a resolution of 480 x 800 pixels. It is powered by a 1GHz single-core CPU, 512MB of RAM and runs on Android 4.0 ICS straight out of the box. The best part is that the OS is a vanilla experience. There is no skin overlaying it. The phablet has 4GB built-in storage that can be expanded up to 32GB via a microSD card (4GB included in the box).

The rear of the Zync Cloud Z5 has an 8MP camera with an LED flash and the front has a 0.3MP camera for video calling. The specifications under the hood are quite average when compared to other budget smartphones. With a 5-inch display and a resolution of 480x800, the ppi of the device is a mere 186.

As mentioned earlier, the Android 4.0 ICS experience on the device is vanilla and the fact that it doesn't come preloaded with a skin adds to the smoothness of the device. The Zync Cloud Z5 comes preloaded with a bunch of apps that includes Astro, Big Fliz, Bollywood Hungama, ibibo games, ThinkFree Office and a few more. The addition of these apps isn’t anything great as they are all free and can be easily downloaded via the Google Play store.

Performance
For a Rs. 9,000 phablet, the Zync Cloud Z5 could have been all show and no juice, but we were proven quite wrong. The colours on the display are quite well represented but it does feel a bit underwhelming to look at. As any other device, the display is susceptible to glare and using it in direct sunlight can be uncomfortable.

Video playback is quite good. We played a few SD .avi videos and they ran without any hiccups. The Z5 however, refused to play 720p or 1080p mp4, mov or mkv files. We didn't expect the device to play them, but if it did, it would have been a pleasant surprise.

The audio output though isn’t the best for media. We played a few songs and videos and the speaker on the device at full volume is quite screechy. For apps however, the speaker was loud but lacked clarity at full volume.

In terms of the raw performance, it competes wel with the other budget phablet, the iBall Andi 5c. You can take a look at the benchmark scores below.

From the above benchmark scores it is clear that both the devices are almost at par when it comes to the raw power under the hood. So, if raw performance is your primary purchase decision, you can consider picking up either device.

The thing that made the Note a great device was that it was very comfortable to watch videos, browse the web, use art/note-taking/productivity apps and basically have a great work and play device in your pocket. Calling the Zynk Cloud Z5 the poor mans Galaxy Note isn’t entirely wrong as it does all of the above quite well, but not as well as the Note.

Browsing the internet on the Zync Cloud Z5 is a reasonably good experience and zooming into text and the scaling of websites is smooth too. The keyboard however is definitely a two-thumb job as it is very difficult to type on the Z5 with one hand.

Now come the two most important questions – battery life and call performance. A 2500mAh battery powers the Cloud Z5, which is a beast. In the continuous video playback, the device lasted in the vicinity of 5 hours and that is awesome. In real world usage, we charged the device to 100% in the morning, made a few calls throughout the day, did a lot of texting, Whatsapp IM’ing and Facebook networking, along with checking mails, watching the occasional YouTube video and playing Angry Birds. By nightfall the battery was 40%. All this time, the device was connected to Wi-Fi or HSDPA. It’s safe to say that our usage was above average and the device stood by us quite well.

The Zync Cloud Z5 is a dual-SIM device – giving you the power of two phones in one. The call quality on the device is crisp and clear at both ends, though we did face the occasional vanishing voice when the signal fell.

Verdict
The Zync Cloud Z5 is a promising device as a budget 5-inch device. For Rs. 9,000, you are getting a smartphone-tablet hybrid that has decent performance as a phone and a multimedia device. If you want an IPS display, you can take a look at the iBall Andi 5c. But as of now there are only a few options available in the budget phablet category. If you are desperate to pick one up, you can go for either, depending on your budget. But we’d suggest that you hang on to your cash for a bit longer until this category gets populated with a few more options.

Check out our video review of the Zync Cloud 5 below.