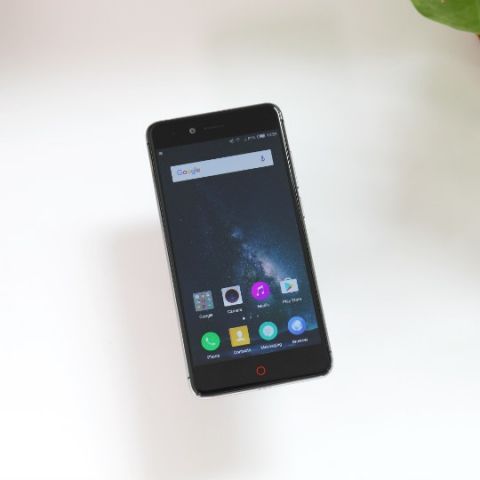 The Nubia Z11 Mini is not the best all-round smartphone in the sub-20k segment, but it is definitely the best camera phone in this range. If that’s on the top of your priority list, then we definitely recommend this. If not, the LeEco Le 2 and Redmi Note 3 are better options.

The Nubia Z11 Mini is the successor to the Nubia Z9 Mini, which had a really good camera. Back then, the company was a subsidiary of ZTE, but it’s going solo this time, re-entering the Indian market with the Z11 Mini.

Like its predecessor, the Z11 Mini also sports a 16MP camera and we of course expected good things from it, given the history. However, camera isn’t the only attribute that makes a good phone. In the budget segments, phones need to be overall performers to be really recommendable. So, is the Nubia Z11 Mini up for the task, or does the LeEco Le 2 remain the king of the hill in the sub-15K segment? We take a look.

Camera
The Nubia Z11 Mini has what is easily the best camera in the sub-20k segment. The image quality comes really close to that of the OnePlus 3. Both phones carry the same IMX298 Exmor RS sensor from Sony, with an f/2.0 aperture lens. 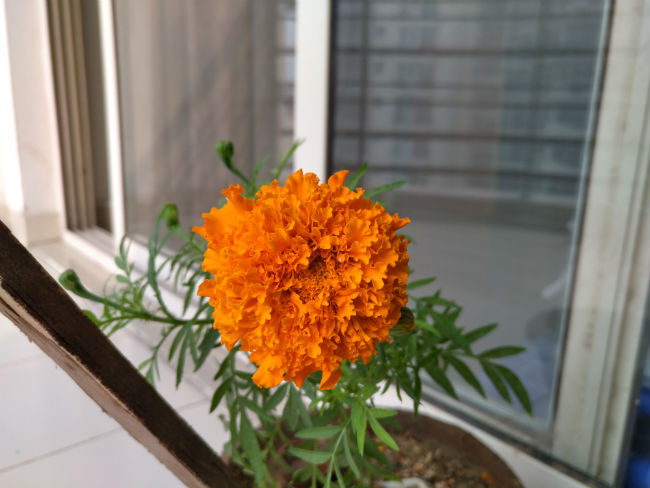 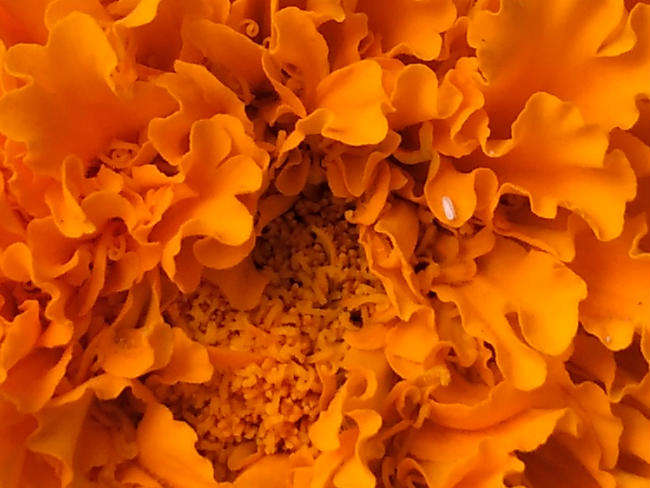 Images taken in broad daylight show well balanced colours and are closer to source. The camera algorithm doesn’t oversharpen images or mess up the contrast ratio. This leaves a lot of room for post production, which is important in a camera-centric smartphone. 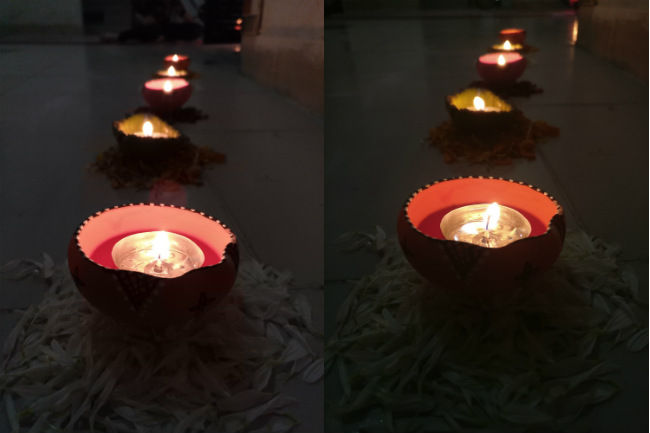 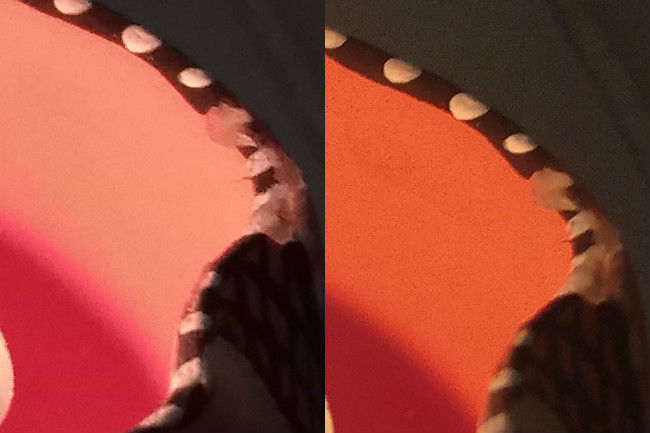 It’s no slouch in low light conditions either. To counter lack of light, the software increases brightness, making images a tad bleak. The Pro mode can tackle this, by allowing users to control shutter speed, white balance, ISO and more. 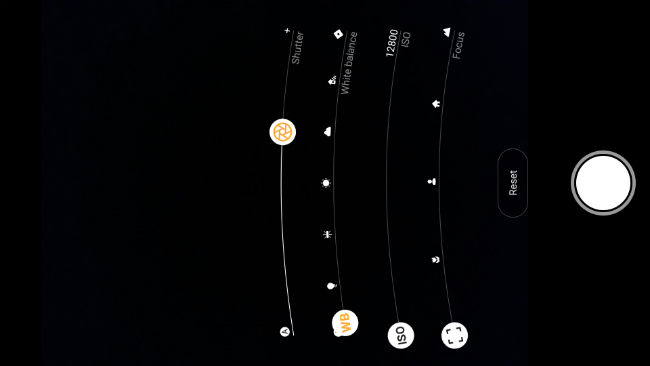 The camera is faster than it was on the Z9 Mini, but Nubia would do well to tweak it further. There is a split second processing lag, which we would prefer to not have.

The Nubia Z11 Min’s front camera is equally good, but only under well lit conditions. Under low light, the quality of your selfies will dip.

Build and Design
There are unique aspects to Nubia’s design language, particularly the red backlight on the navigation keys, and the red accent around the camera lens and home button. It has rounded sides, a compact form factor and a familiar, but comfortable design. There’s also 2.5D glass on the front.

It has a glass back, which adds to the good looks of the phone, but it is a fingerprint magnet and relatively slippery. 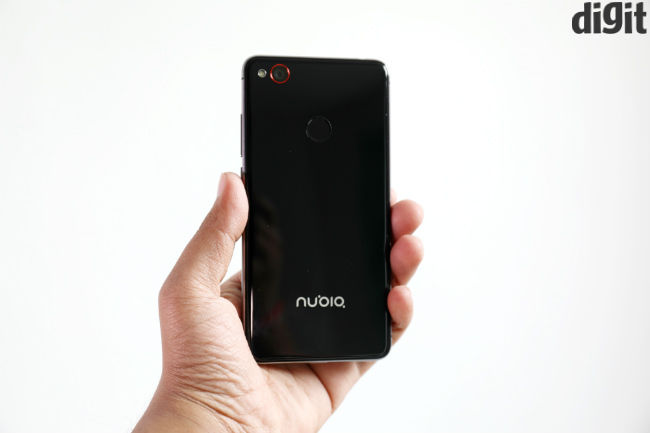 Overall, the Nubia Z11 Mini looks premium, is comfortable to hold, and feels premium. It’s smaller form factor make it very ergonomic compared to its brethren out there. Button tactility of the power button and volume rocker are good.

Display and UI
The 5-inch display on the Nubia Z11 is arguably the best I have seen on a sub-15K smartphone. The display does seem a tad oversaturated, but it’s pleasantly so. If you don’t like the oversaturation, you can adjust the hue and saturation settings manually as well.

The smaller display also sports a 1080p resolution, taking the pixel density to around 441ppi, and that’s sharp enough. The Gorilla glass 3 display is quite smooth in day to day usage and further adds to the user experience. The only issue with the display is in auto-brightness, which would often make the display too dim or too bright. This should be an issue with Nubia’s software, and can be corrected later. The maximum luminance from the display is 415 Lux, which is quite low. 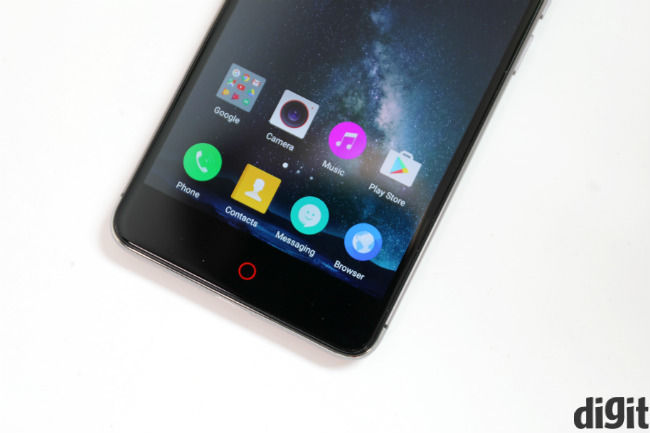 The UI on the other hand is kind of a mixed bag. As with most smartphones from Chinese phone makers, the Nubia also skips the app drawer. It’s not bloated, though, and the fingerprint sensor works well. What I don’t get however, are widgets like “Lock Screen” and “Accelerate”. One locks the display and the other apparently frees up RAM. These are pretty much just gimmicks that adds no true value whatsoever. After all, why would you need a separate widget to lock the screen, right? The Accelerate widget is basically the same as Clear All on the recents menu. 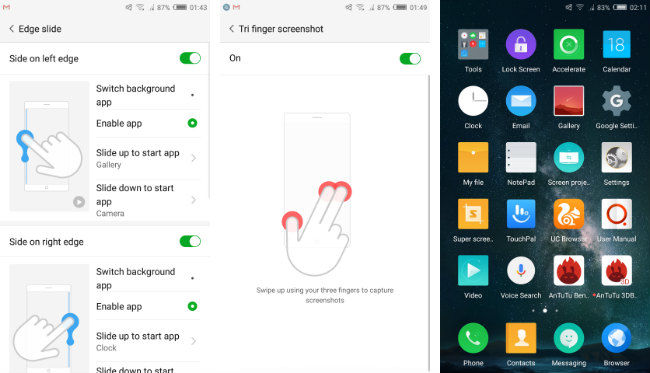 The Nubia Z11 Mini also supports some gestures. For example, you can launch apps by swiping along the edge, and use the fingerprint scanner to take a screenshot. You may not like all of them, but some are indeed useful.

Performance
This brings us to the performance of the phone, which is a real issue. On paper, the Nubia Z11 Mini has the same specs as the Moto G4 Plus, but it doesn’t perform like one. There are lags all over.

You’ll see lags when switching between apps, opening and closing them, or just trying to use one of the many gestures. Needless to say, gaming on the phone is not a smooth experience either and I found myself constantly waiting for games to load. Moreover, I encountered lags and stutters while playing games. The synthetic benchmarks further justify these findings. 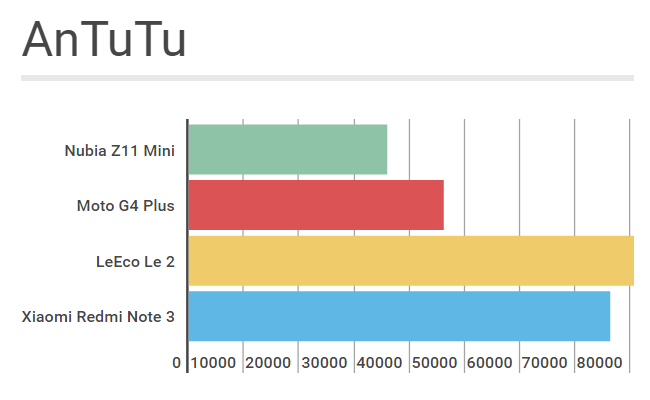 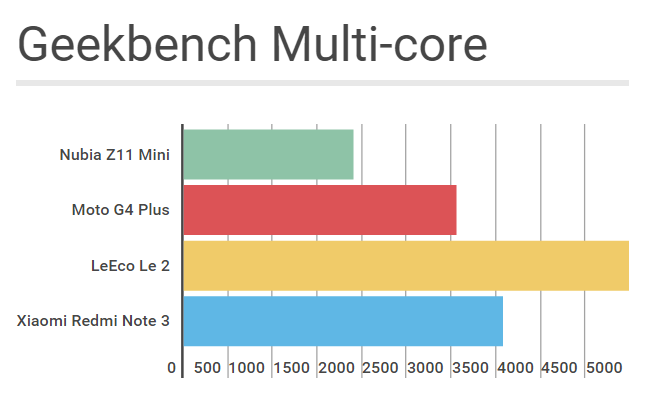 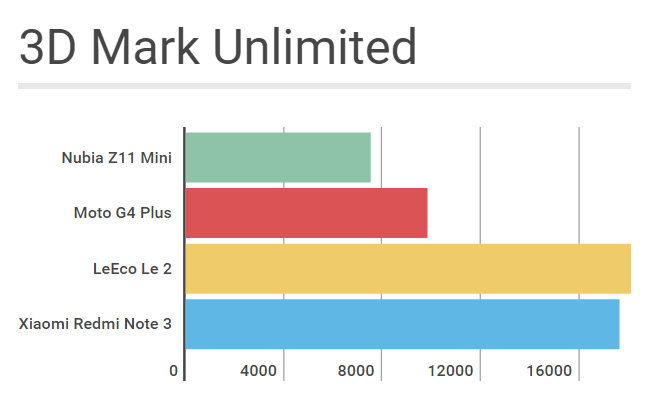 I should add though that regular users may find the performance satisfactory and reasonable still. Call quality and reception on the other hand is quite good. The voice quality over the earpiece was amply loud and clear. 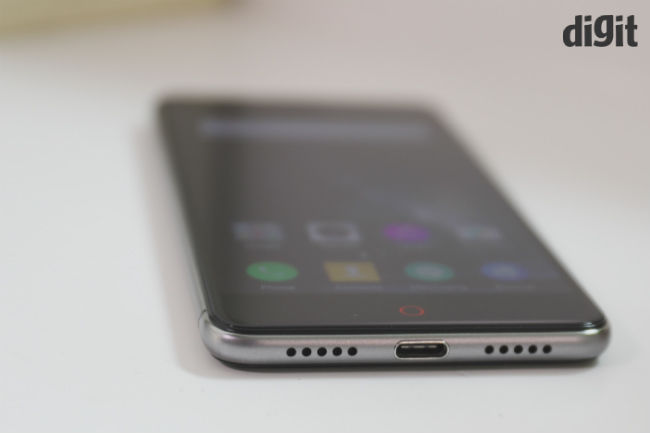 Audio quality on the phone fine, as far as phone audio goes that is. The bottom speaker is fine for calls, and loud enough. You will want headphones for music, which turns on the DTS Mode, giving you access to an equaliser of sorts. You can tweak the bass and treble here, which enhances overall sound quality.

Battery Life
We thought the 2800 mAh battery wouldn’t be enough, but Nubia has done a good job of optimising it. The phone provided me about a day’s (dusk to dawn) worth of usage between charges. You will need a power bank if you’re a heavy user, but most regular users should get by a work day easily. 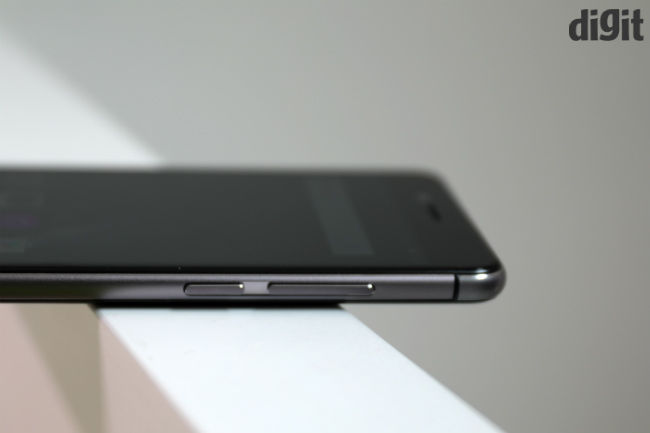 Bottomline
The Nubia Z11 Mini is the best camera phone you can buy in the sub-20K smartphone category. Period. Further, the good design, commendable display and the decent battery life add to the overall experience. However, its performance is a bummer. If you’re willing to compromise performance for a good camera, then go for the Nubia Z11 Mini. If you want a better overall performer, though, the Redmi Note 3 and LeEco Le 2 are better options.