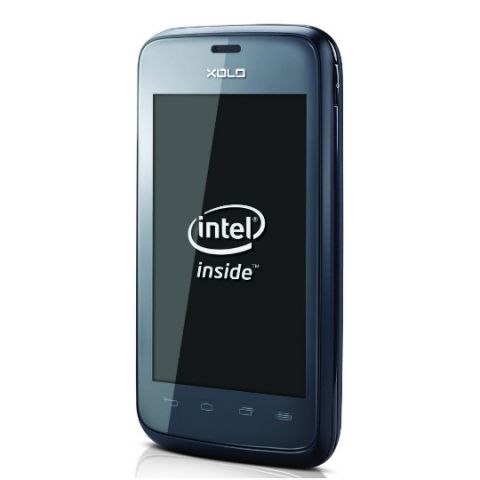 For Rs. 9,000, the Xolo X500 sports some pretty impressive hardware under the hood. You get a processor with the ability to run all the apps from the Google Play store, a great build, good display and battery that will last you through the day. The down side to the device is that some may think that the form factor is too small.

The Xolo X900 was the first device to be powered by an Intel Atom chipset. You can read our review of the device here.

Today, we have with us a more affordable and entry-level Android device, the Xolo X500, which runs on the Intel Atom ‘Lexington’ Z2420 SoC chipset, and is priced at Rs. 8,999. Does the device bring anything new to the table with its Intel chipset or are you better off sticking to the tried and tested?

Build and Design
In terms of its looks, the Xolo X500 feels really small in our hands. In a day when even the budget devices are targeting screen sizes of 4.5-inches or higher, the Xolo X500 has a gone in for a smaller form factor.

On its face, the X500 has a 3.5-inch display. Below the display we have the standard four capacitive buttons – back, home, multitasking and menu. Most modern day smartphones use the home button as the multitasking button too and it’s nice to see that the X500 has them separately here.

The rear of the Xolo X500 device has a rubbery textured finish giving the phone a good grip. The rear of the X500 also houses the 5MP camera without a flash. The bottom of the rear panel also has the speaker grill. The volume rocker is on the left of the device and the power button is on the right. These buttons are very slim and difficult to access without looking at the device. The top of the device has the microUSB port and the headphones jack.

In its overall design, the Xolo X500 is cure and cuddly. It has a form factor very reminiscent of the Sony Xperia Tipo and the HTC Desire C but seems to be better built. It’s very comfortable for single-hand operation, small enough to fit into jeans pockets.

Features and Specifications
The processor is where the Xolo X500 differs from its peers – it runs on the Intel Atom ‘Lexington’ Z2420 SoC chipset. The single-core processor is clocked at 1.2GHz and will come with Intel Hyper-Threading Technology (implying two threads, or logical cores). It also has 512MB of RAM. The 3.5-inch display has a 480x320 pixel resolution. It has 4GB of built-in storage expandable up to 32GB via a microSD card slot. It also houses a 1,500mAh battery. It runs on Android 4.0.4 ICS. The device compromises on a front facing camera.

The Xolo X500 is very lightly skinned and veteran Android users will feel right at home here. The smartphone however doesn’t come preloaded with any noteworthy apps.

Performance
For a device priced at Rs. 9,000 we thought we’d start with comparing the device to other smartphones in this price range, such as the the Karbonn A21, Huawei Ascend G300, the Sony Xperia Tipo and the Micromax Canvas 2 A110.

In other benchmarks – Quadrant and Antutu, the device outperformed not only the competition by a mile but gave us scores which we have seen on premium devices such as the Sony Xperia SL, HTC One X and the Samsung Galaxy Note II to name a few.

Since benchmarks represent the raw performance, it is quite clear that Intel has done well with the SoC and Hyper-Threading technology.

The 3.5-inch display on the X500 has good viewing angles. We saw a bunch of videos on the device and the representation of colour, including the black levels was really good. Even when running apps or playing games, on full brightness, the device looked very vibrant. The only downside to watching multimedia content on the device is that the size of the display is really small.

Another disadvantage of the small size of the X500’s display is that the keyboard may feel cramped for some. The layout isn’t bad and the auto correct does a good job of rectifying your mistakes. But those of you that have big hands may want to be wary of the device.

The audio output from the X500 is loud and clear even though the audio does distort a bit at full volume. You won’t be using the loudspeaker for anything more than ringtones and app noises and for that it is good.

The Xolo X500 boasts of dual-SIM capabilities. The call quality from the device is really good. It is crisp at both ends and this is where the device does shine.

The camera on the X500 is decent considering the price of the device. Sure you won’t get great results if you shoot in the dark as the smartphone compromises on the flash, but in a well-lit environment the images you get are average.

The Xolo X500’s 1500mAh battery is enough to get through a day of average use. We watched some videos, made calls did a lot of texting and some social networking and the device made it through the day with ease.

Bottom Line
For Rs. 9,000, the Xolo X500 sports some pretty impressive hardware under the hood. You get a processor with the ability to run all the apps from the Google Play store, a great build, good display and battery that will last you through the day. The down side to the device is that some may think that the form factor is too small. If you are looking for a small smartphone you can consider this device over the HTC Desire C and the Xperia Tipo. If a large screen sub 10k device is what you are looking for, we suggest you take a look at the Micromax Canvas 2 A110.