For its price, the Wickedleak offers a massive feature-set and delivers performance. For those reasons alone, it deserves its rating. However, if you're brand-conscious and would feel embarrassed by being seen with a phone that looks so much like another (a completely understandable stance), then ignore the rating and go for one of the phones we've listed below.

Samsung was the first to introduce the new phablet segment of devices in the market and there were plenty that thought that the screen size was too big for daily use. But today almost every handset manufacturer has a 5 to 6 inch device selling in the market. Even the less well-known brands have been flooding the market with large screened devices that are actually selling well due to their low price.

We got our hands on the Wickedleak Wammy Titan 3, a 5.7-inch Android phablet which runs on a quad-core 1.5 GHz MediaTek processor with 1GB of RAM. There is 16GB of internal storage which is expandable via microSD card, dual-SIM support, a 13MP rear camera, a 5MP front camera and a 3200mAh battery.

We had earlier reviewed the Wammy Titan which resembled the Galaxy Note 2, and now Wickedleak has done it again. No prizes for guessing the fact that the Wammy Titan 3 looks exactly like the Samsung Galaxy Note 3. Of course, unlike the design, the quality hasn’t been replicated. The Wammy Titan 3 even comes with the leather-like back finish that we saw on the Note 3.

The display is a 5.7 inch IPS touchscreen with full HD (1920x1080) resolution which provides good brightness, although not the best that we have seen. The touch sensitivity is smooth and is quite responsive. There is a 5MP camera above the display and below the display you will find the navigation keys which include one hardware ‘home’ button and two capacitive touch buttons for the ‘back’ and ‘settings’ options. Like we said the build quality isn’t so good and we noticed that the ‘home’ key was actually flimsy and felt as if it would pop out at any moment.

The sides have a metal finish like the Note 3 and all the ports and buttons are also positioned at the same places. The left side has the volume rocker keys, the right side has the power/lock key, there is a microUSB 2.0 port (not a USB 3.0 like the Note 3) at the bottom and at the top there is the standard 3.5mm audio jack. 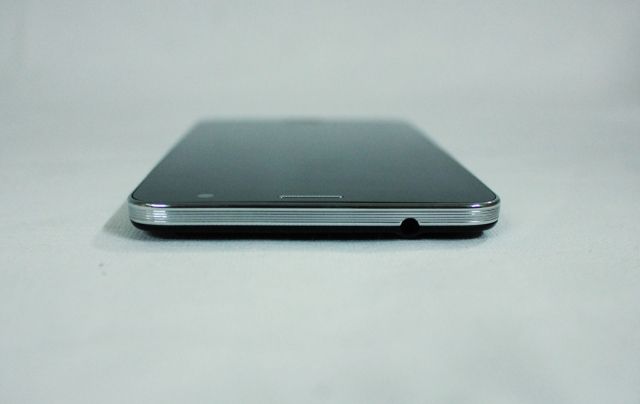 The back panel is primarily plastic and has been given a finish that makes it look and feel like leather. The back also has the 13MP camera and a speaker grill at the bottom. Inside, there is a large 3200mAh battery, a microSD card slot and two SIM card slots out of which one is a microSIM slot and one is a regular full sized SIM slot. 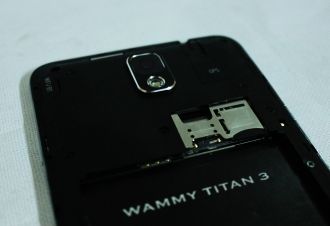 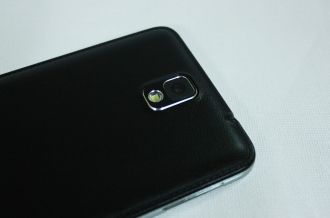 Overall the device is a nice ‘tribute’ to the Galaxy Note 3. In terms of build quality it isn’t one of the best of devices but seems to suffice in the price segment it belongs to.

The Wammy Titan 3 runs on stock Android 4.2 with UI additions to make the phablet look like the Galaxy Note 3 (of course, this did not surprise us). The phablet shares some features from Samsung’s TouchWiz UI including a similar looking lockscreen as well as some wallpapers and a couple of widgets. Apart from that, the device runs smooth and boots up pretty fast with hardly any lag when scrolling through the interface or running the apps.

In the performance department, the 1.5 Ghz quad core Mediatek processor does hog a lot of power. This was evident when we did our battery test and found that the phablet consumed 26% of the battery in one hour while running a full HD video even after being juiced up by a 3200mAh battery. This will translate to about half a day of slightly heavy use, after which you will have to put it on charge. When it comes to benchmarks, the Titan 3 didn’t score so well in graphics performance, but did well in task based benchmarks. Check out the benchmark results below:

Gaming performance on a device with a large real estate always seems to be a good experience and with a full HD resolution it gets even better. The only issue we faced was that there was lag in games that are graphically intensive like Real Racing 3 and Dead Trigger 2. Apart from that, games that require less power were smooth and didn’t bother us much. 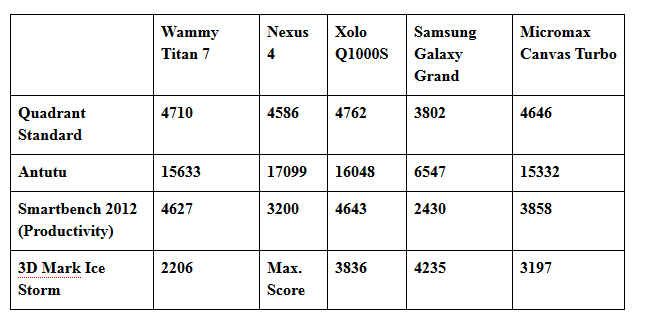 We weren’t fascinated by the Titan 3’s camera but it does a decent job thanks to the 13MP module. The colours have slightly high contrast and pictures taken in low light conditions aren’t the best. It does manage to get some crisp shots in bright daylight, although some pictures looked oversharpened. All in all, a decent shooter.

Check out some of the camera samples below. 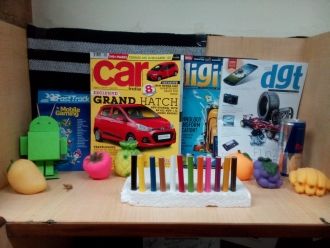 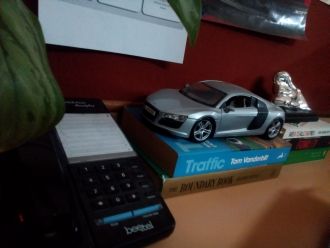 Although the brand might not appeal to some, the Wickedleak Wammy Titan 3 looks a lot like the Galaxy Note 3 and this just might attract some consumers. The phablet is priced at Rs. 16,999 so it falls in the mid-range segment of smartphones offering specs which a number of other manufacturers are offering at a similar price range.

For its price, the Wickedleak offers a massive feature-set and delivers performance. For those reasons alone, it deserves its rating. However, if you’re brand-conscious and would feel embarrassed by being seen with a phone that looks so much like another (a completely understandable stance), then ignore the rating and go for one of the phones we’ve listed below.

We think that it will get some good competition from devices like the Micromax Canvas Turbo A250, Sony Xperia C and Gionee E-Life E6. You could even look at the iBerry Nuclea N1  which we recently reviewed ( as it has almost the same specifications as the Wammy Titan 3.)