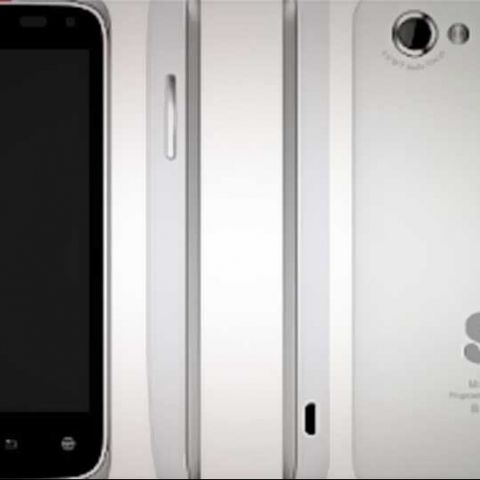 The Spice Stellar MI 425 has a decent build; good power under the hood, good inbuilt speakers, and to sweeten the deal, it can be upgraded to Android 4.0 Ice Cream Sandwich. Sure, the interface is a little sluggish, the screen is a bit dull and the device is heavier than weï¿½d like, but if Rs. 10,000 is your budget, you should definitely consider this just for the OS upgrade.

Budget Android phones are dime a dozen and offer similar features such as decent hardware under the hood, a good form factor and the ability to run all the apps available in the Google Play store.

With Android 4.0 ICS smartphones hogging the limelight closely followed by the phones that will receive the ICS update, budget Android phones running Android 2.3 Gingerbread seem to be falling far behind.

Today, however we have a budget Android smartphone that not only boasts of decent specifications under the hood but will also be upgraded to Android 4.0 ICS. Spice has said that the update will be made available to the device towards the end of July, which really isn’t that far. Is the device too good to be true, or do we finally have the ideal budget smartphone?

Design and Build
You could easily mistake this phone for an HTC or LG smartphone due to its rectangular candy bar design. Look closely however and you will see the difference.

Hold the device in your hands for the first time and you will immediately realize that it is heavy when compared to the other smartphones in the same category. It weighs 110 grams, same as the Micromax A50 Ninja (read our review) On paper, it is lighter than the Samsung Galaxy Y Pro Duos (read our review) but in the hands it feels heavier.

The rear panel of the device is made up of plastic but doesn't feel cheap. It is well built. Below the rear cover rests the slot for the 2 SIM cards (yes, the device supports dual-SIM) and the microSD card.
Overall, the design of the Spice Stellar MI 425 feels good especially considering the price point of the device.

Features and Specifications
Under the hood, the device is powered by a 1GHz single core Qualcomm Snapdragon processor and has 512 MB of RAM. The Adreno 200 GPU powers the graphics of the device. Currently the device runs on Android 2.3 Gingerbread but will be upgradable to Android 4.0 ICS. The device also has Wi-Fi along with Bluetooth 2.1.

The hardware under the hood is one of the best for a budget Android smartphone. Other budget dual-SIM Android devices offer much slower processors, such as the Samsung Galaxy Y Pro Duos that’s priced at Rs. 9,500, and has an 832MHz processor. The only other “budget” device to give the Spice Stellar a run for its money is the Nokia Asha 303. The device too boasts of a 1GHz processor, a touchscreen as well as a physical QWERTY keypad. The only place where the Nokia Asha falls short is the fact that it runs Symbian S40 and the Spice Stellar is ready to run ICS.

The Spice Stellar MI 425 comes preloaded with quite a few apps such as Rail Yatra, Spice Gang and news apps. You also have access to the Google Play store to access the plethora of apps available there.

But all isn’t great for the device. The preloaded launcher (called Launcher ) makes the performance of the device very sluggish. You have access to 5 customizable home screens but the transition between each of them is very sluggish and laggy. You’d do better to download the free version of Launcher Pro, which makes the interface a lot smoother.

Performance
In terms of raw benchmark performance, the Spice Stellar blew the competition out of the window – well, almost. Apart from the GL Benchmark - Egypt Standard, the device out performed every budget Android device we have seen till date.

In Quadrant it scored 1477 as compared to the Samsung Galaxy Y Pro Duos that scored 1017. In Antutu, it scored 2801 as compared to the closest runner up, the Micromax A50 Ninja that scored 2344. In GL Benchmark - Egypt Standard however, the Spice Stellar was out performed by the Micromax A50 Ninja. The Stellar scored 2017 where as the Ninja scored 3871.

In terms of the multimedia performance, the device is a mixed bag. YouTube ran extremely well on the device. The audio was very clear but the visuals on the display were a bit disappointing. We were half expecting the device to run 720p or 1080p MP4 videos but alas, we were left disappointed. The 4.1-inch display has a resolution of 480x800, which is average, but the screen lacks brightness. It is very susceptible to glare and even indoors, the viewing angles are bad.

The Spice Stellar MI 425’s speakers on the other hand, are brilliant. Running apps like Angry Birds, and listening to music was a treat as the audio was loud and clear. Playing games and running apps on the device was smooth and the device was able to handle a bit of multitasking.

The device houses a 5MP rear snapper whose performance can be considered as average. The camera found on the Sony Ericsson Xperia Mini Pro is a lot better in terms of performance but the device does get by with some decent shots. The flash to gets the job done adequately but if the lighting is really low, be prepared to see some noisy images.

Coming to the core functions of a phone – making calls. The device boasts of dual-SIM capabilities, one GSM, the other WCDMA/GSM. The call quality from the device is really good. The audio at both ends was clear and the loudspeakers performance was good.

The Spice Stellar MI 425 boasts of a 2,000 mAh battery. In real world usage, the device will last you about one day. We ran a bunch of apps, social networking messages and call and the device had 30% juice towards the end of the next day.

Bottom Line
The Spice Stellar MI 425 has a decent build; good power under the hood, good inbuilt speakers, and to sweeten the deal, it can be upgraded to Android 4.0 Ice Cream Sandwich. Sure, the interface is a little sluggish, the screen is a bit dull and the device is heavier than we’d like, but if Rs. 10,000 is your budget, you should definitely consider this just for the OS upgrade.

f you are in the market to pick up a budget Android device today you can take a look at our specifications comparison here.