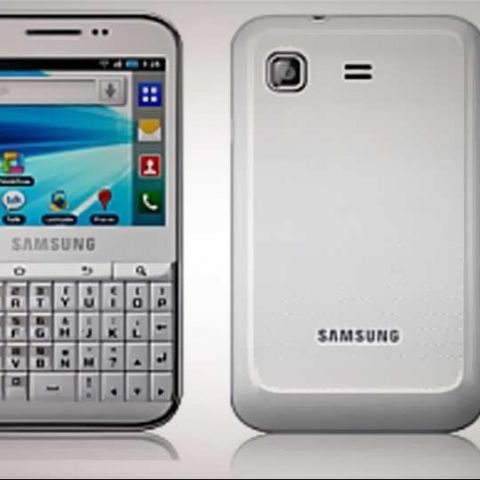 The Samsung Galaxy Pro is one of a rare kind - an Android phone with a QWERTY keypad. This phone will definitely appeal to those who text/IM/email a lot, and aren’t very comfortable with a touchscreen only phone. The Galaxy Pro has a pretty sleek form factor, and the keypad is extremely comfortable to use. But be advised, the display is a bit of a disappointment. If watching a lot of videos is included in your smartphone usage diet, this one isn’t for that. At this price, we would recommend this as an alternative for the Blackberry Curve 8520.

In a world where there is a dearth of Android smartphones with a good physical QWERTY keypad, the Samsung Galaxy Pro is one of a very rare breed. Rarer still, is that it has a candybar QWERTY form factor (like most BlackBerry phones), quite unlike the comparatively common Android QWERTY-slider. So, while it does offer the convenience of a QWERTY keypad, how good is it as a phone, overall? Let us find out...

Look and Feel
Straight out of the box, the Galaxy Pro looks pretty Blackberry-ish. Good thing though, because that is what it is meant to do. The 2.8-inch touchscreen display and the QWERTY keyboard take up all the space on the front panel. The volume rocker is on the left side panel, and doesn’t feel very high quality when being used. The power button is on the right side panel. You will find the 3.5mm jack as well as a micro USB slot on the top panel. The phone has a combination of gray and black colours, and looks pretty classy. Feels very lightweight as well, but that isn’t really a surprise considering it is mostly plastic with a bit of chrome. The battery cover has a self-design on it ensures the handset grips well in the hand. The slim form factor allows you to type with the same hand that is holding the phone.

Features
The hardware offering of the QWERTY is something that is sure to appeal to heavy SMS and email users. The fact that this one is Android based, 2.2 version to be precise, allows Samsung to offer this to those who like the Blackberry phones for their form factor, but love Android for the apps and the hugely different usage experience. The 3.15MP camera is an okay clicker, but will not come across as something that is among the best ones around. The TouchWiz UI has been really toned down for this display. The widgets capability remains, but a certain number of different widgets are on offer.

Performance
The Samsung Galaxy Pro offers good call quality. The earpiece is decently loud, but will struggle a bit in terms of clarity when you really push the volume levels to the higher side. The same goes for the loudspeaker as well.

[RELATED_ARTICLE]The 2.8-inch display is a very basic TFT capacitive type. The performance on offer is just okay, and the lack of sharpness is pretty evident. The colours are okay, but the display is just barely there. Legibility in sunlight isn’t the best, and if you push up the brightness levels, the lack of sharpness just becomes more evident. The basic resolution of 320x240 pixels ensures this one will make videos look very bad! But then again, this one isn’t really targeted at those who want a multimedia phone.

The Galaxy Pro is powered by an 800MHz processor. The interface is pretty slick, and we didn't notice any slowdowns under normal usage. We were pretty surprised with the swift performance offered by the Pro. We had a few social networking and IM apps running in the background, and that really didn't slow it down. However, the moment you have a game running, there will be a bit of a slowdown in the response time. Keeping the price in mind, we think the performance on offer is very good.

The 3.15MP camera will click just okay pics and videos, but with grainy results at best. Considering that the Blackberry Curve 8520’s camera isn’t very good either, we really cannot hold that against the Galaxy Pro.

The battery life is typical Android smartphones- 2 days from full charge to complete discharge. The 1350 mAh battery does a pretty solid job, but a bigger battery would have helped the backup times quite a bit.

The hardware QWERTY is an absolute delight to use. The keys are pretty big and chunky, which makes typing quite accurate despite no gap between them. With just the right amount of travel, and a pretty chunky feedback, typing fast wont be a problem using this keypad. However, you will be doing most of the browsing using the touchscreen. The response is pretty accurate, but the small screen size does have its limitations. Pinch-zoom type gestures don’t always work very well, and you will need to recompose the fingers and implement the gestures again!

Our Take
While the box price is Rs 14,120 for the Galaxy Pro, we have seen it retail for just less than Rs 10,000 at various retailers. At a sub Rs 10k price, this one is a superb deal. The dual goodness of a touchscreen and a QWERTY makes this highly relevant for the heavy text message, IM and email users. The touchscreen helps retain the original flavor of using an Android smartphone. The only sad bit is that the display isn’t very good. However, that may be a small compromise, considering you are getting a lot more than just a touchscreen phone.

However, while there aren’t really any Android based touchscreen QWERTY alternatives we can recommend in this price bracket, you can definitely take a look at the Blackberry Curve 8520. At under Rs 10k, that one also makes for a very good deal, albeit with a hugely different OS and user experience.