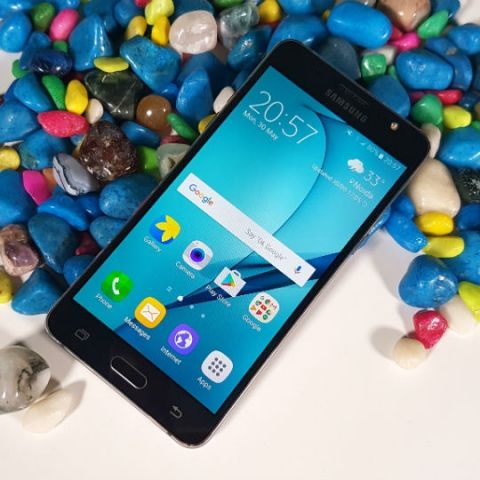 The Samsung Galaxy J5 (2016) is not the smartphone you should buy. It is quite underpowered compared to other offerings in the market, doesn't have a fingerprint sensor, and its pros don't outweigh the cons. The compromise isn't worth Samsung's brand value.

The Samsung Galaxy J5 is a very important device for Samsung India. The company claims that its J series is the highest selling smartphone series in the country, which means that a lot of its revenues depend on this series, perhaps even more so that the flagship Galaxy S devices. Being a market leader, Samsung fights its battle on two fronts. It has Apple on one side and a sea of Chinese manufacturers on the other. While the Galaxy S flagships tackle the iPhone, The Galaxy J series takes on the aforementioned Chinese players.

The Samsung Galaxy J5 (2016) leads the charge here. At Rs. 13,999, it falls squarely in the most competitive market segment in the country. In many ways, it’s a quintessential Samsung smartphone, but then again, there are questions that need to be answered. The Galaxy J5, on paper, is massively underpowered, and not a worthwhile buy. But specs don’t always translate to user experience, and that’s what I shall yearn to explain, with the Samsung Galaxy J5 (2016) review.

Build and Design: Oh so Samsung…

It’s a distinctly Samsung design, this one. The Galaxy J5 has the candy bar design that Samsung built its business on, and one that has often been called boring. But that’s just the looks, and whether you like it or not will differ from person to person. From a build point of view, there’s little to complain about, at least as far as the quality is concerned. 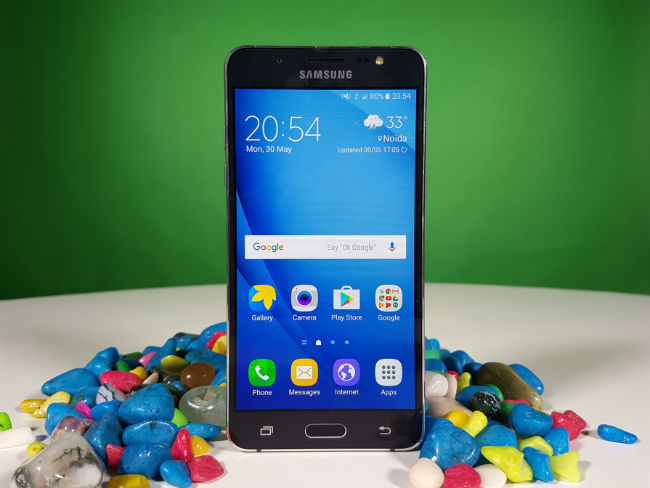 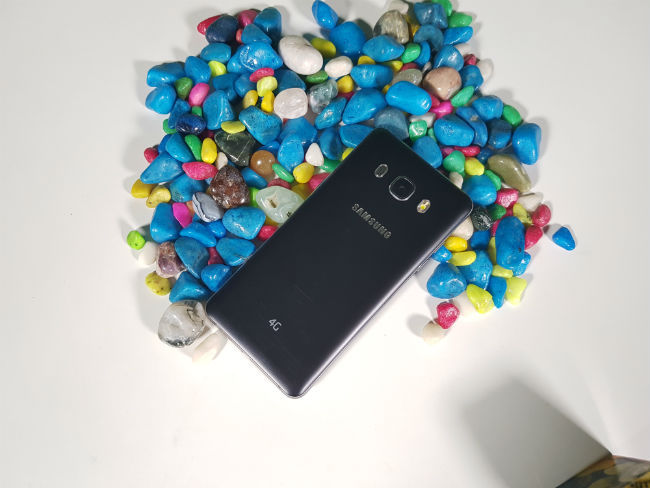 The Galaxy J5 (2016) has a metallic frame, with matte-ish plastic on the back, and it feels well made. There are no noticeable noises or nicks to hinder the design.

That said, the matte plastic back, to me, feels too two-years-ago. The Moto G4 Plus has a plastic design, but the grooved finish on it feels better, and the Lenovo Zuk Z1 and Xiaomi Redmi Note 3, priced around the same, feel even better. The Galaxy J5 isn’t slippery, like the Redmi Note 3, but it isn’t premium either. It’s feels like budget phone, except that budget phones are fast starting to change their persona. 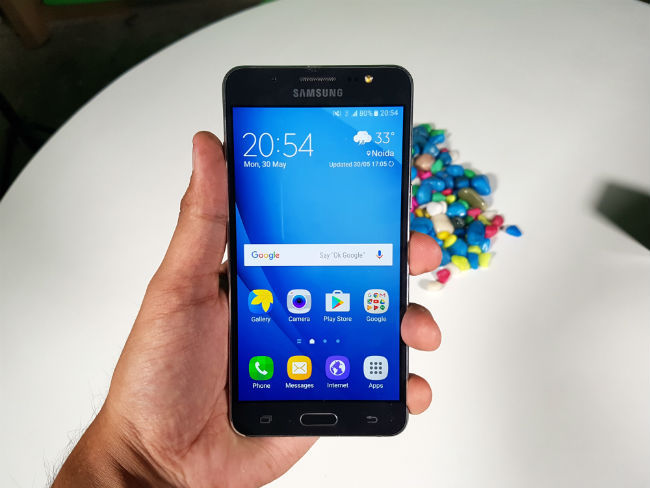 The display is easily the strongest aspect of the Galaxy J5. Samsung’s Super AMOLED panel looks colourful and vibrant. Comparing side by side with a Redmi Note 3, the crisp colours and warmth of the J5’s display really pops out. Of course, the Redmi Note 3 is far from the best display in this price bracket. The Moto G4 Plus poses a more realistic threat to the Galaxy J5 in this department, and I still find the Lenovo Zuk Z1 to be the best amongst these devices.

As good as the colours are, though, the Galaxy J5’s major weakness is in the fact that the resolution lies at 720p only. That said, this will be apparent to you only if you’re comparing side by side with the 1080p devices mentioned above. For the most part, you should like the Galaxy J5’s display.

Performance: Samsung vs the world…

At a time when phones in the sub-15k range are almost as powerful as mid-ranged flagships, Samsung chose the Snapdragon 410 for its Galaxy J5. The last gen SoC is royally mismatched against competitors in this price segment. Motorola’s Moto G4 Plus is about 40% faster than the Galaxy J5, while the Xiaomi Redmi Note 3 is almost 65% faster. The Lenovo Zuk Z1 and LeEco Le 1s are about 55% faster than the Samsung Galaxy J5. 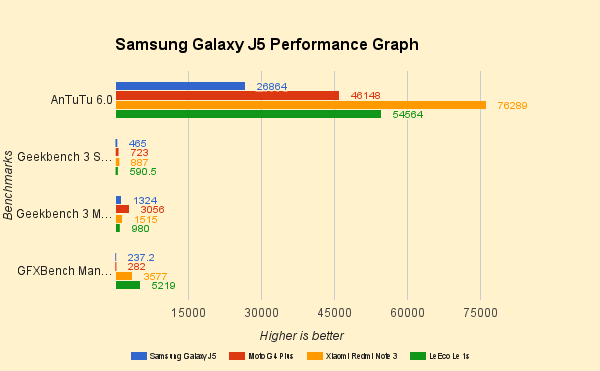 In fact, while I could make do with the uninspired design, and good but low-resolution display, the performance makes it an absolute deal breaker for me. I see slight frame drops even in games like Temple Run 2, and these are amplified much more when you move to more demanding games like Injustice: Gods Among Us.

Even if you’re not much of a gamer, the app load times are high, even for apps like Facebook. This keeps increasing as you try heavier apps. The fact that this phone is too weak was evident right from the setup.

Camera: Not the Samsung we know…

While f/1.9 is an impressive number for a smartphone camera, it’s not the only thing that determines image quality. It allows for a shallow depth of field on the Galaxy J5, but the camera algorithm seems to pump up the ISO in lower light situations. To understand, one must recognise that the aperture, shutter speed and ISO, together determine the amount of light captured.

Hence, while f/1.9 is good for the Galaxy J5, its low light performance is still not the best. There’s quite a bit of noise and images aren’t as bright as you’d expect. Under well lit conditions, the Samsung Galaxy J5 is right up there with the Moto G4 Plus, in fact, at times it shows better details, but images under low light are less than ideal.

To be clear, I’d still recommend this camera over a Xiaomi Redmi Note 3, but if you’re looking for the best, my money’s on the Moto G4 Plus.

The Galaxy J5 has a small battery, and 2600 mAh really doesn’t sound like much nowadays, but Samsung somehow made it work better than I expected. On heavy usage, the battery ran dry in about 10 hours, but this included extensive gaming, about half an hour of YouTube streaming, lots of texts and emails, and over 15 phone calls. Cutting the gaming and streaming, got this up significantly.

You’re not going to get two-day battery life out of this device, but if you try hard enough, you’ll get it to last you a whole day.

The Samsung Galaxy J5 has a satisfactory camera, pretty good display, and even passable battery life. For me, though, the performance is an absolute deal breaker, and given its competitors, I can’t recommend the smartphone to any one.

The only real reason you would want to buy this is because it has Samsung’s name attached to it, and perhaps the fact that it’s easy to buy. Even so, I do not think that the compromise in performance and other features is worth going for Samsung’s brand value. The phone doesn’t have a fingerprint sensor, and less than 1GB of free RAM is just not enough for everything we do on our phones today. The Samsung Galaxy J5 is quite underpowered and not worth your money.