Samsung has done some substantial upgrades this time and tried to fix the mistakes it made on the first Galaxy Grand. We can say that they have actually succeeded this time. Grand 2 is an excellent phone if you are looking for a large screen phone with good performance. But if the screen size doesn't matter to you, then there are better phones with similar specs at much lower prices.

After releasing the first Galaxy Grand phone in January last year, Samsung is ready with the second iteration of the series. This time the Korean electronics company has bumped up the specs of its new Grand phone quite significantly. But does it live up to the expectations of its loyal Samsung users? Lets find out.

This time around, Samsung has decided to go with a Qualcomm Snapdragon 400 processor on the Grand 2, instead of the Cortex processors found on most of its other mid ranged smartphones. The smartphone is run by a 1.2GHz quad core processor with ARMv7 architecture and an Adreno 305 GPU on board. The smartphone comes with Android 4.3 Jelly Bean out of the box. Its a dual SIM smartphone with both slots supporting GSM networks. It features 1.5GB of RAM and 8GB of internal storage. In order to prevent the shock of running out of storage, there is a memory card slot beneath the removable back cover which is expandable upto 64GB. The phone has an 8MP camera on the back and a 1.9MP camera on the front for video calls. 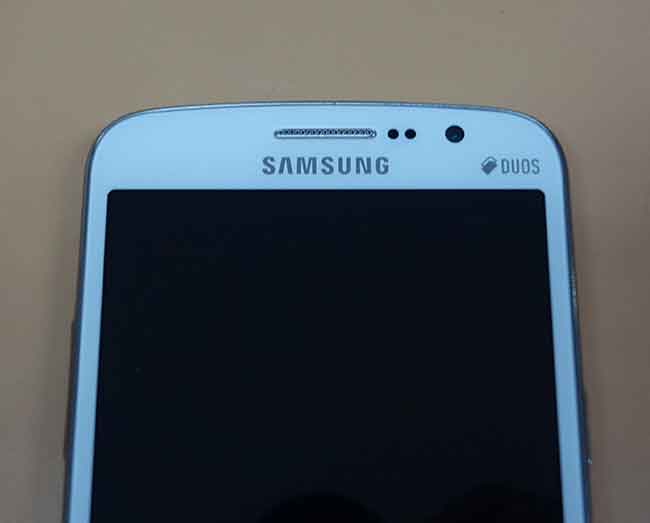 For connectivity, there is WiFi, Bluetooth, USB and GPS and the battery has a capacity of 2600mAh.

The Grand 2 has a generic Samsung design with a slightly slimmer body. It has a nice build and feels good in the hand. But with dimensions of 146.8 x 75.3 x 8.9 mm, the phone is slightly bigger for use with only one hand. If you need to check your notifications, it is hard to reach the top of the display with your thumb while holding the phone with just one hand. 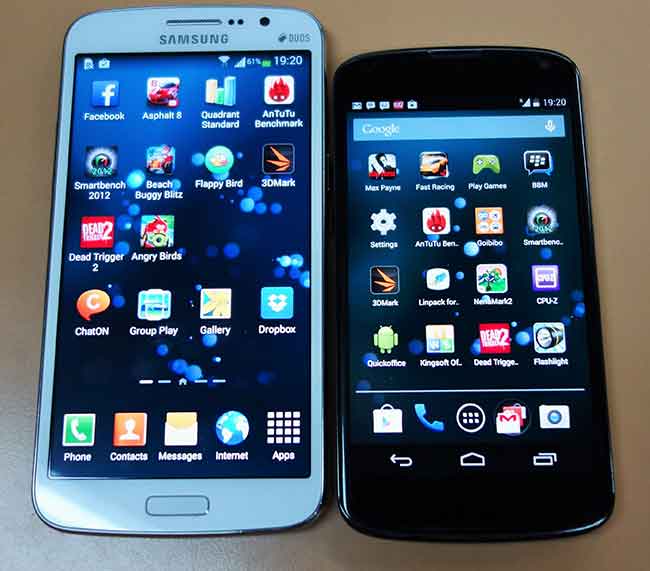 The Grand 2 even dwarfs the Nexus 4

The back cover is a removable plastic lid with a leather design on top, just like the one on Samsung Note 3. In addition to being attractive, the feature is also useful; because it improves the grip on the phone. 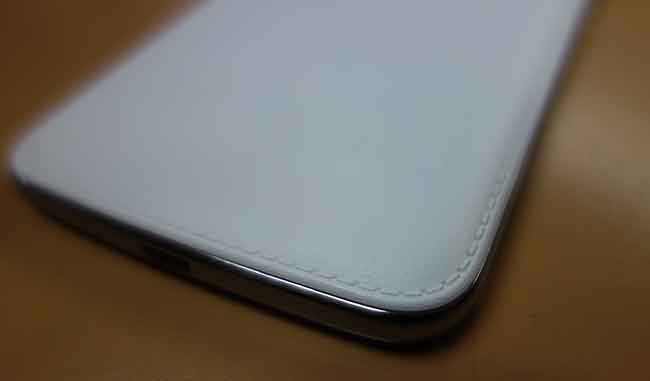 Beneath the panel lies the detachable battery, two SIM card slots and a micro SD card slot. The rear camera is accompanied by a small speaker grill on its right and the LED flash on the left. 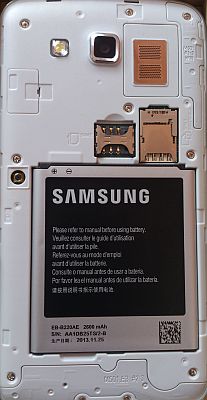 The phone has a chrome finish plate placed around the phone which adds to the refined look of the phone. The power/lock and the volume rocker keys are placed on the right and left side respectively. Both are also chrome plated. The USB charging port is located at the bottom with earphone jack on the top. 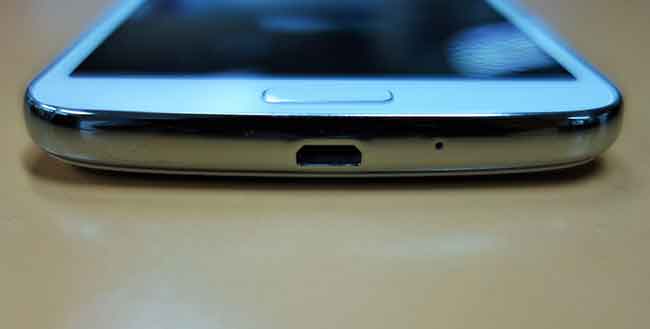 The front has a glossy 5.2 inch TFT display with the earpiece sitting on the top. The earpiece is accompanied by a proximity/light sensor and the front camera. The front bottom has the generic Samsung keys with the home button key in the middle, back key on the right and the settings key on the left. Both the back and settings keys are capacitive. The bezel is also covered with a glossy plastic with a mosaic design lying underneath which isn't very noticeable.

One of the best features of the phone is its screen. We had expected a Super AMOLED screen on this phone and by the looks it did seem like one. But the surprising thing is that the screen on Grand 2 is a TFT display. We were very impressed by the quality of the display though. Honestly, its hard to believe that its a TFT display. Samsung has decided to go for a HD (1280x720) display this time around on the Grand 2, which makes the phone look very neat. The display is quite sharp due to a respectable pixel density of 280 ppi. Reading on the phone is a pleasure. Colors are natural and the phone has excellent black levels.

The screen's touch is very smooth with an excellent response and provides good viewing angles. What we didn’t like about the screen was that it gets smudges quite easily. You will have to keep cleaning the display after each use.

The Grand 2 impressed us with its performance. The phone did not show any lag while going through menus and widgets. The only issue is the delay when an app is opened -- they do not open as quick as you would expect. Otherwise, the interface is butter smooth while scrolling through various home screens and the app menu. The Snapdragon 400 with Adreno 305 GPU make the phone snappy and we had no complaints with the performance of the phone. It also performed well on benchmarks also.

The phone showed off its power in gaming as well. We played Asphalt 8 on it and the playback was very impressive. There was no lag while racing while keeping the visual quality on 'high' setting. Playing Dead Trigger 2 was also a pleasure. It played exceptionally well even on 'high' visual quality setting as well. A couple of times though, the phone froze while playing Asphalt 8. It became totally unresponsive and we had to restart the phone to use it again. Hopefully, its just a software bug and Samsung should fix it with an update soon.

The phone is capable of playing H.263, H.264, VC-1, MPEG4, VP8, WMV7/8, MP43 and Sorenson Spark video formats. You can listen to audio in MP3, AAC, WMA, FLAC, Vorbis, AMR formats on this phone. Watching HD movies on this phone was a good experience on the provided display. Music quality was average with provided earphone. We would recommend you buy a better quality earphones for a better listening experience. The speaker phone isn't loud enough as expected from a phone this size but it worked fine in quieter environments. We did miss a few calls in loud places but that can be fixed with the vibration alert.

The phone has Android 4.3 Jelly Bean with customized Samsung UI. The notification bar is transparent which is usually found on Android 4.4 and above only. 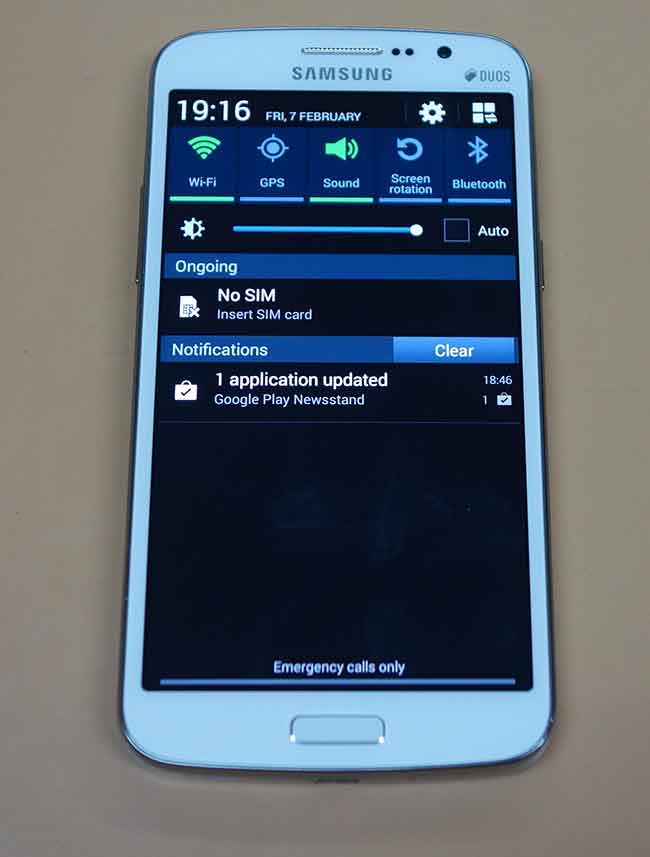 It comes with some preloaded Samsung apps like Club Samsung, My Magazine (which is based out of Flipboard), Story Album and Samsung Hub. You can install apps from Google Play Store and Samsung Apps as well. It comes pre-installed with ChatON which is Samsung's chatting application and can be used with a Samsung account. It also comes with integrated Flipboard for reading news in a 'magazine' style.

The quality of pictures was good with the camera on board. The camera performs quite decently in well-lit conditions and the output is punchy colors which look quite natural. It features multiple shooting modes for various conditions. Apart from the 'auto' mode, the phone has 'Beauty face' mode for portrait photos, 'Best photo' mode for taking a series of pictures and the select the best one, a 'continuous shot' mode which takes pictures every 3 seconds, a 'Best face' mode, a 'Sound & shot' mode (which adds a few seconds of background sound to the photo), an HDR mode, a 'Panorama' mode, a sports (for taking fast pictures) and a 'Night' mode.

What we didn't like about the camera was its performance in low-light. The photos turned out to be too grainy and the colors came out to be extremely smudged. Outdoor photos during the day came out to be excellent showing off natural colors. The camera performed well indoors under room light as well. The video quality was good as well but only in well-lit places.

There is no dedicated camera key on the phone. Also the camera auto focus is bad and most images taken turn out to be blurry. You have to keep your hands extremely still while taking pictures.

Another element of this phone that really impressed us was its battery backup. The phone lasted easily through the day without requiring any charging. Even after a normal day’s usage, there was still some charge left on the phone. The battery dropped only 20% after playing a Full HD file for an hour with all the connectivity options enabled. If you want a dual SIM phone with good looks and an excellent battery backup, then you should buy this phone.

Samsung has done some substantial upgrades this time and tried to fix the mistakes it had on the first Galaxy Grand. We can say they have actually succeeded this time around as Grand 2 is an excellent phone if you are looking for a large screen phone with good performance. If the screen size doesn't matter to you, then there are better phones with higher specs and lower prices. Moto G, which was launched recently in India, has the same hardware with a slightly smaller screen and costs almost nine thousand rupees less. With such products around, we would have expected Samsung to put a more competitive price tag on the Grand 2. The phone is definitely overpriced at Rs. 22,900.