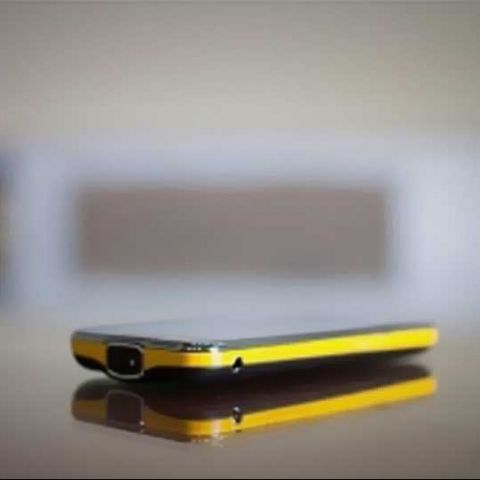 Android smartphone manufacturers today try to add features that will distinguish their devices from the rest of the run-of-the-mill Android phones. Some go in for a slim form factor, some focus on design, and others give you free cloud storage. Some even boast of glasses-free 3D capabilities.

Today we have a phone that has gone in a direction that has been tried before but hasn't been successful – adding a projector to a phone. Remember the Intex Mini Theatre 8809? Well, today we have with us the Samsung Galaxy Beam. It runs on Android 2.3 Gingerbread and boasts of a 15 lumens projector. Is it enough to help it outshine the competition?

Design and Build
One look at the Galaxy Beam and you know it isn’t slim by any means, measuring in at 14.9mm in thickness. Even though the device is thick, it doesn't feel very heavy at 156gms. It is big, but still comfortable to hold.

The Galaxy Beam has a two-tone colour – black and yellow making it look like a taxi (front and back is black and the device has a yellow border surrounding it).

On the front, the Galaxy Beam has a 4-inch TFT capacitive touchscreen display with a resolution of 480 x 800 pixels. Above the screen is the earpiece to the left of which rests the VGA front facing camera for video chatting.

Below the Galaxy Beam’s display are two touch sensitive buttons – menu and back and one physical button – home. On the left of the device are the volume rocker, headphones jack and the SIM card slot. The SIM card rests under a flap cover, which is nice as it protects the card.

On the right of the device is a similar flap under which rests the microSD card slot. The right panel also houses the on/off/sleep/wake button. There is a third button here, which is used to switch on and off the projector on the Galaxy Beam. The location of the buttons is convenient and they are well laid out on the device.

The top of the Galaxy Beam has the projector. It would have been nice there was a cover for the projector as it is exposed and can easily get scratched due to wear and tear.

The rear panel of the device has a premium feel to it. The rear panel has a textured rubberized finish, which adds good ergonomic value to the device. The grip of the rear panel is really good. The back of the camera also has the 5MP camera a with an LED flash that has the ability to shoot video in 720p@30fps. The bottom has the microUSB port for charging and data transfer.

Overall, the design of the Galaxy Beam is your everyday run-of-the-mill Android device with the biggest difference being that it isn’t gunning for a slim design thanks to the projector it shows off.

Features and Specifications
In terms of the power under the hood, the Galaxy Beam is powered by a 1GHz dual-core processor, coupled with 768MB of RAM. It and runs on Google Android 2.3 Gingerbread. The device is expected to get the Android 4.0 ICS update in the near future. In terms of storage, there is 8GB built-in storage at the user’s disposal, expandable up to 32GB via a microSD card.

Skinning the Gingerbread OS on the Galaxy Beam is the Samsung TouchWiz UI. If you have used any Android-powered Samsung device in the past, you will feel right at home. You can swipe at any part of the lock screen to unlock the device. You have access to 7 customizable home screens and the standard phone, contact, message and apps lister rests at the bottom, no matter what home screen you are on.

The biggest addition to the features of the phone has to be the projector and its controls. To access the projector, unlock the device and press and hold the projector button and voila! The projector comes on. Once on, the menu gives you access adjusting the focus, rotating the image that the projector shows and enabling quickpad.

The quickpad on the Galaxy Beam is a really cool feature. It enables you to track your figure on the projected display and is very useful if you are showing presentations or need to point at something particular on screen. It has a variety of functions such as pointer, pen, eraser, type, clear and exit. The Beam also comes with a stand on which it can be rested for projection purposes.

Performance
Apart from boasting of a projector, the Galaxy Beam also functions quite well as an Android smartphone. In terms of the benchmark comparisons, the device is between the HTC One S and the Sony Xperia S. Its scores fall right between these two devices, which makes it an average performing Android device. It isn’t the best, but it isn’t the worst either.

The TFT display on the Galaxy Beam is crisp and quite vibrant, good for apps and videos. Surfing the Internet and reading text too was comfortable. There are only two places where the performance of the screen suffers. First is in the auto brightness. Set on auto, the brightness of the screen is dimmer than we’d like. Secondly, the display isn’t the best to view under direct sunlight, even on full brightness.

The keyboard on the Galaxy Beam is quite good but typing is far more comfortable in landscape mode than portrait. It feels a little too squished in portrait mode. Apart from the regular typing, you have access to swipe, which is nice.

The camera on the Galaxy Beam is surprisingly good. The interface of the camera is fairly simple and you can simply tap to focus. The absence of a physical shutter button is missed though. The camera app gives you a variety of options such as shooting modes, scene modes, focus modes, white balance, blink detection GPS tagging and more. The camera on the device was better than what we expected.

Apart from all the bells, whistles and projections, the Galaxy Beam needs to be able to do the basics such as make calls. Here it performs well and the audio was clear at both ends even when the signal strength fell to half. The downside is that there were occasions when we faced call drops.

You can also use the Galaxy Beam’s projector as a visual presenter or OHP. Simply put, the projector will display on screen whatever the rear camera sees. This is a nice touch, if you need to show some physical objects or highlight something on a big display. The projector can also be used as a torch light and a very bright one at that too.

One disadvantage of the Galaxy Beam is that it didn't play MOV and MP4 files straight out of the box. We downloaded a third party app from the Google Play store to run the videos on the device.

The Galaxy Beam’s audio output is quite good if you are in a small quite room. It lacks bass and if you are watching a movie, sometimes it is difficult to make out the dialogues but the fact that the speaker is loud is pretty impressive.

If you are wondering how long the Galaxy Beam will last, you can expect about 3 hours of playback from the 2,000 mAh battery in the device.