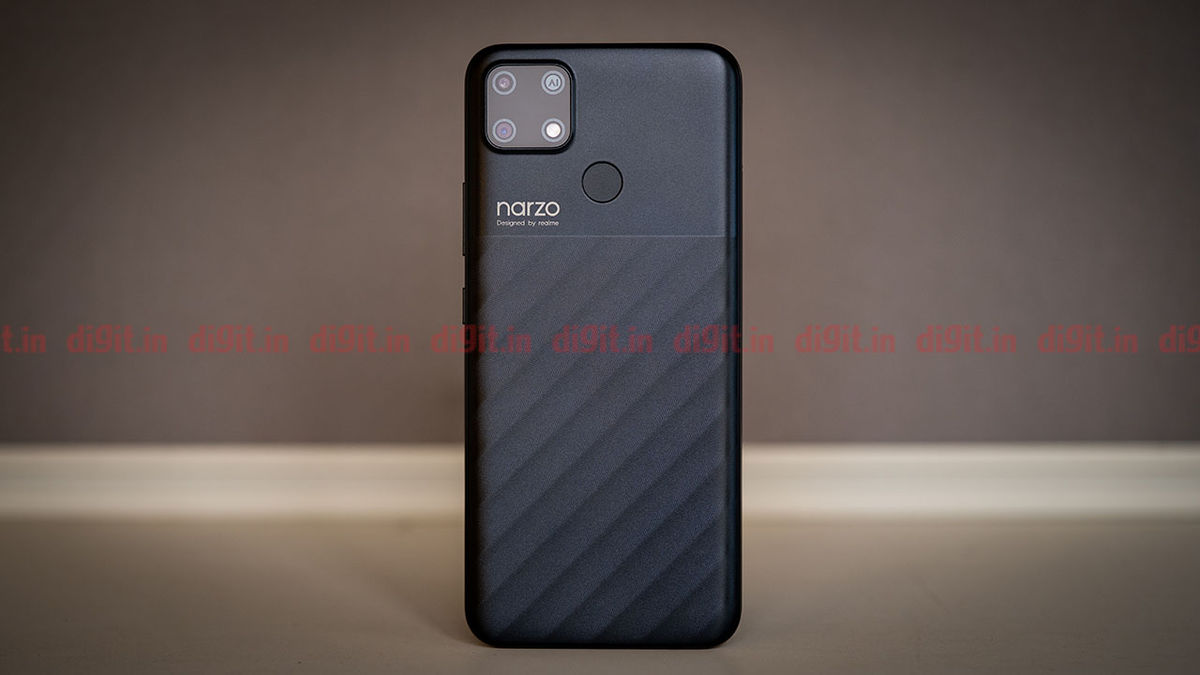 Narzo 30A is an interesting phone. It's heavily inspired by the Narzo 20 launched last year, but that doesn't make it a bad phone. In fact, starting at Rs 8,999, it emerges as a value for money offering that impresses with its long-lasting battery, overall performance, and design. Its cameras do leave a little to be desired, but that's understandable, considering its price.

Realme launched the Narzo series last year as the company's answer to growing user demand for affordable phones that also offer plenty of processing power for watching videos, browsing the web, playing games, and more. Realme even delivered on this promise as it launched a number of phones under the series which despite a few compromises impressed as complete packages. Now, Realme plans to do the same in 2021 with the launch of the Narzo 30 series smartphones. The series brings with itself two new phones, the Narzo 30A and Narzo 30 Pro.

Of the two, we have the Narzo 30A with us today. This is the more modest of the two smartphones, as it brings with itself as it's available at a slightly more affordable price point. However, the phone still manages to pack within its frame enough firepower to impress when you start using it. Among its highlights are the Helio G85 SoC, a 13-megapixel lens-based dual camera set-up, a big display, and an even bigger 6000mAh battery. But as we found out during our time with the Narzo 30A, there's a lot more to the device than just the above-mentioned specs. Here's everything you need to know about it. 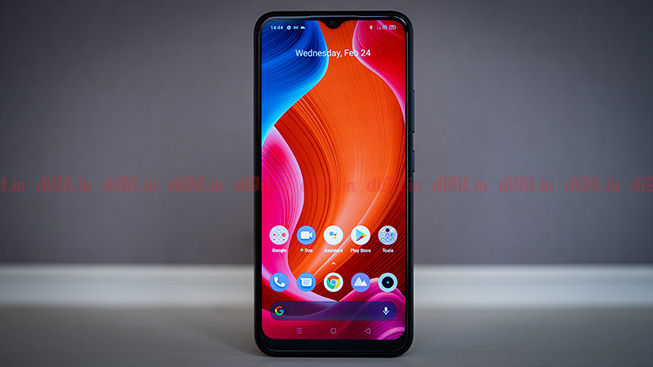 The Realme 30A is surprisingly good enough for most tasks that you throw at it and the primary reason for this is definitely its Helio G85 chipset that's paired with up to 4GB of RAM and 64GB of storage. This chipset is built using a 12nm process and has been used previously by Realme on the Narzo 20 launched last year.

The chipset features an octa-core CPU that uses two ARM Cortex-A75 performance cores clocked at 2.0GHz for heavy lifting and six ARM Cortex-A55 efficiency cores running at 1.8GHz for apps of daily use. At the time of its launch, this chipset was touted to be one for mobile gaming on a budget, and even in 2021, it manages to live up to the promise. While the CPU definitely helps with running heavy-duty games, it's the ARM Mali-G52 GPU that does most of the rendering graphics. The GPU can boost up to 1Ghz for peak performance which helps provides a responsive user-experience while running games. But more on gaming later, let's first look at a few scores to see how the device does at synthetic benchmarks. 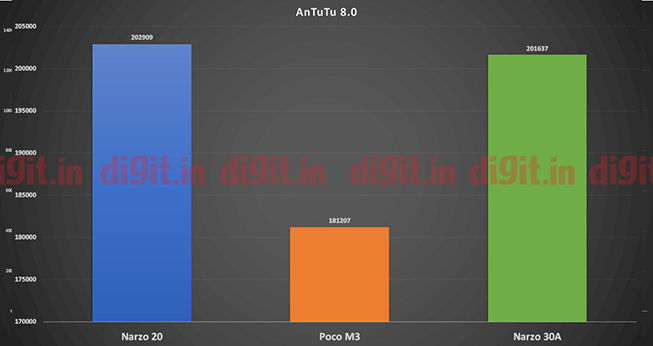 This Helio G85 SoC powered device scored a decent 201637 on AnTuTu and when compared to the competition in its segment clocked an impressive 350 in the single-core test of Geekbench 5 and 1283 in the benchmark's multicore test. It also did okay when we tested the graphics performance using our battery of GPU tests. In GFX Bench (Aztec Ruins, high tier) the phone scored 746 while also scoring 701 on 3D Mark Wild Life. But Gamebench gave us the most insight into how the device handled popular titles like Call of Duty Mobile and Asphalt 9 Legends, with Narzo 30A clocking decent results for both. 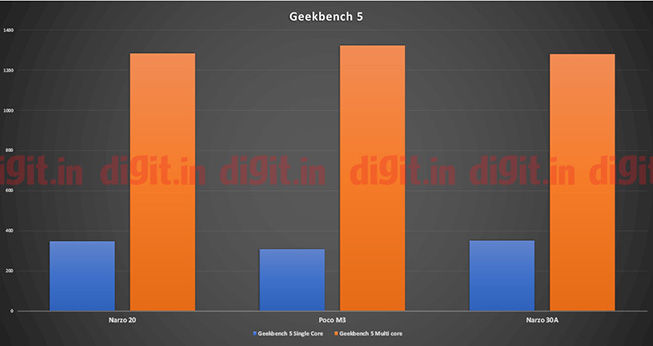 For the former, Gamebench revealed that the Narzo 30A running at medium graphics settings clocked a median of 58 FPS at 87 per cent stability. As for Asphalt 9 Legends, the median was 30 FPS at stability of 99 per cent. Considering we're testing a budget segment device, these numbers look pretty impressive.

These results also fell in line with our general experience of using the device in day-to-day life as the Realme Narzo 30A felt snappy and responsive for most parts. Apps and games were quick to fire up, with the device rarely feeling sluggish or turning unresponsive. 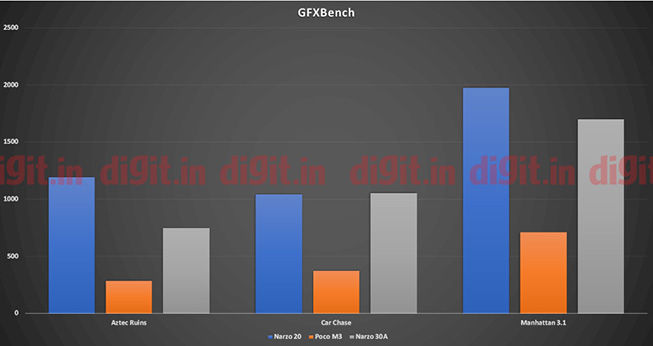 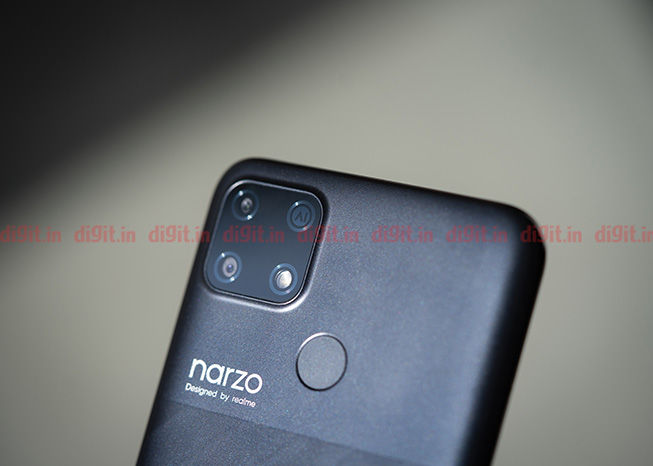 The Realme Narzo 30A comes running the Realme UI which is based on Android 10 and provides a relatively clean Android experience. The custom skin is built using Android 10, however, Realme has already promised an upgrade to the more minimalistic Realme UI 2.0 which the company claims will be coming soon to the Narzo 30A.

While the update is definitely something to look forward to, in its current form, the Realme UI also brings with itself a lot to like as it is powered by the company's latest quantum animation engine which improves the screen fluency. Realme UI also brings in 11 new wallpapers inspired by natural elements.

Further, it also brings with itself support for features like Dual Mode Music Share which enables output of audio through two different devices at the same time. For this, the user can connect a pair of wireless earbuds and wired earphones to share audio with a friend. Apart from this, this Android 10-based copy of Realme UI also brings with itself support for features such as Focus Mode and Dark Mode. Overall, all these elements come together to provide a good experience on what is essentially a budget segment device. 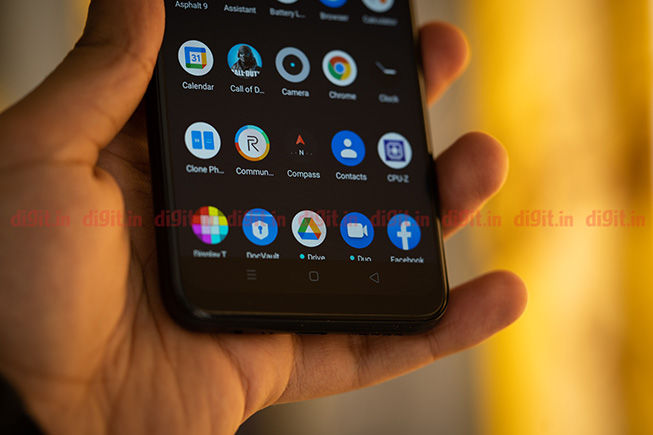 Realme 30A offers an industrious design. However, the use of a sporty diagonal stripe pattern on the back panel helps make the device look a little sporty. This will be appreciated by gamers. The back panel also uses a Pixel-like dual finish scheme, where this striped design covering almost 70 per cent of the back, and the upper end of the phone using a more subtle solid black again in matter finish. This section also houses the phone's square camera set-up and round fingerprint scanner. Both look well designed, with the former protruding very little from the back panel.

All the buttons of use are on the right of the device, with the volume and power button working as expected and feeling tactile and responsive. The phone's speaker grille is placed at the bottom which can be muffled while playing games. Moving on to the display, the front of the phone uses a 6.5-inch panel with support for HD+ resolution (720x1600 pixels). The display also promises a decent pixel density of 269ppi and high peak brightness of 570 nits, although when we measured it, the display topped out at 419 nits. In the real world, this panel does get plenty bright for use even under direct sunlight, however, its feels lacking in clarity because of the low resolution it runs at.

The Realme Narzo 30A flaunts an average screen-to-body ratio of 88.7 per cent with some amount of bezels remaining visible at the chin of the display. At the top, and the sides there's little in the way of bezels to take you away from the experience, however, we do have a small water-drop notch that houses the phone's front camera.

Despite weighing 207 grams, the Narzo 30A doesn't feel too heavy in the hand with the weight appearing to be evenly balanced across the device. The phone also feels quite compact in the hand, especially if you are moving from a bigger smartphone. Overall, it's a well-built device that feels nice in the hand and does just about enough to look appealing to the eye. 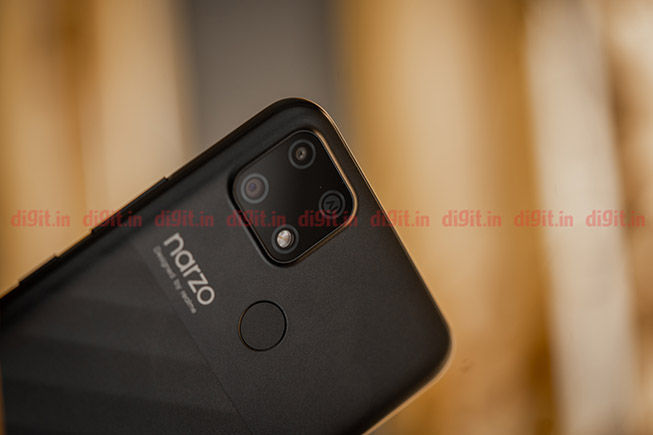 One of the most impressive things about the Realme Narzo 30A is its battery life. The phone is backed by a massive 6000mAh battery pack which provides very good battery life. On average, the phone can easily last a day and a half on moderate use with only gaming draining the battery of the device fast. During our review, we found the phone to lose about 7 per cent charge after a 30-minute session of Call of Duty Mobile when the phone was set at full brightness and audio played through the device's speakers. We also received similar battery results for Asphalt 9 Legends.

There's not a lot happening here in terms of the cameras with Realme deciding to equip the Narzo 30A with a rather basic dual-lens set-up. At the heart of it is a primary 13MP lens with an aperture of f/2.2. This is sat next to a secondary B&W portrait lens for adding extra information to shots. This lens has an aperture of f/2.4. In terms of features, the camera can click images in Super NightScape Mode, Night Filters, Chroma Boost, Beauty, Filter, HDR, Panoramic view, Portrait, Time-lapse, Slo-mo, and Expert Mode. All the heavy lifting here is done by the primary lens which clicks good enough shots in well-lit situations. Resultant images come out with a decent amount of detail, and the shots are generally sharp with adequate dynamic range. The lens does a decent job at locking into focus, however, the shutter response between images is poor with the camera app taking at least 2-3 seconds to process one shot and then move to click the next one. While this may not be a deal-breaker, it is definitely very frustrating if you're trying to click a few shots quickly as this delay between shots can easily lead to the user missing the intended shot. 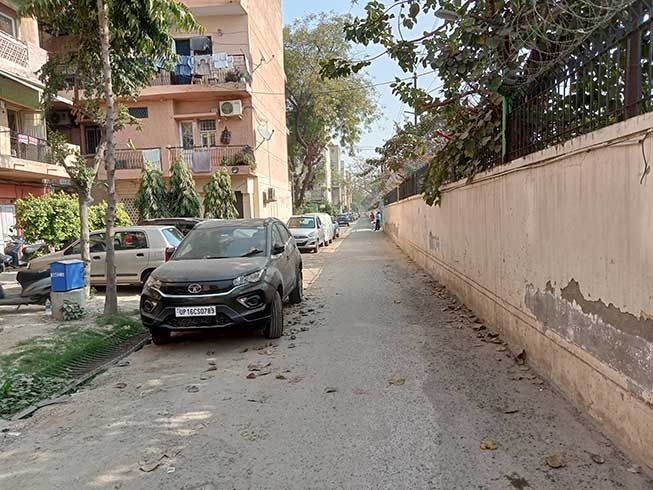 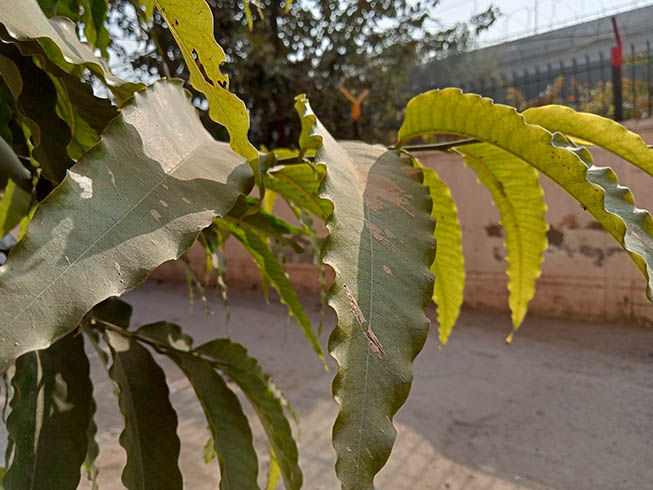 The Narzo 30A also clicks decent portrait shots, however, edge detection remains a problem. The phone does well with low light, with the NightScape mode definitely improving the quality of the pictures when the f/2.2 aperture lens is not fed enough light to work with. There's also little in the way of noise to ruin the shots clicked in low light using this lens. 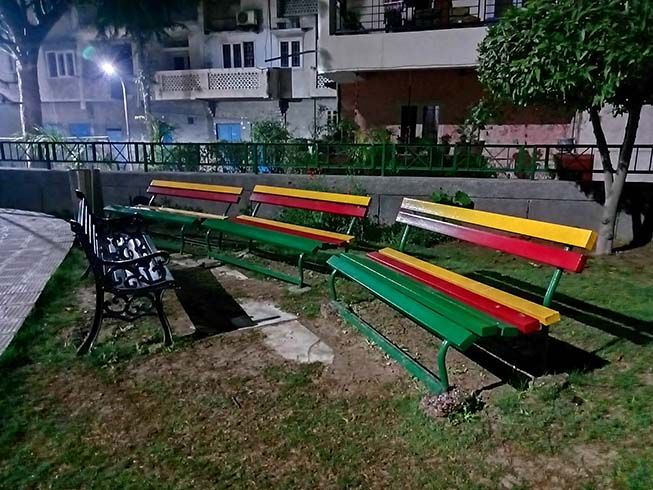 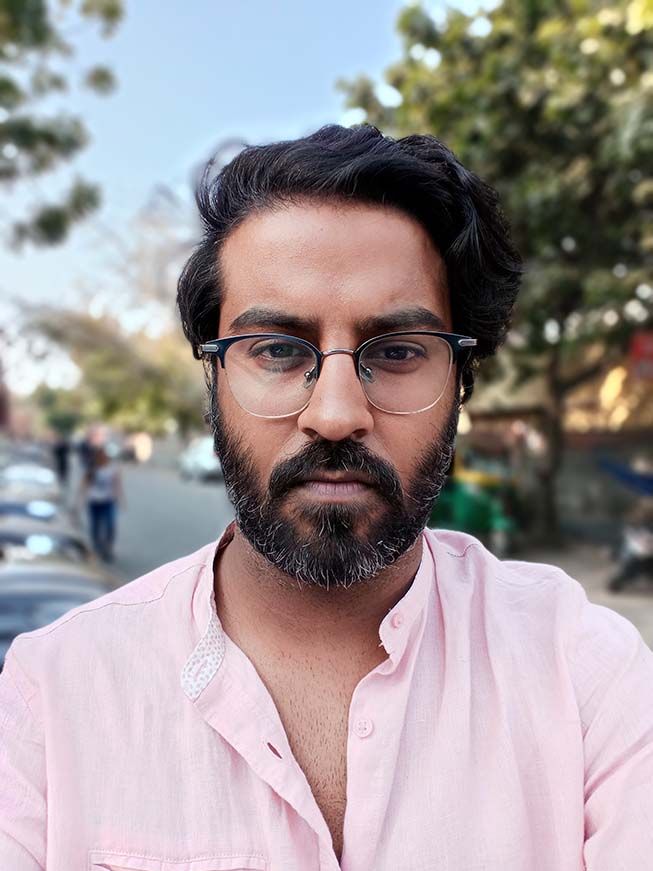 The phone also comes with an 8MP in-display selfie lens with an f/2.0 aperture. This lens manages to capture plenty of detail and accurate skin tones in daylight. However, its low light performance leaves a little to be desired. The selfie lens also offers support for features such as AI beauty, HDR, Panoramic View, Time-lapse and also brings with it various filters. The front camera can also click portrait shots, however, these are let down a little by the camera's average edge detection.

The Narzo 30A is by no means a stand-out phone that changes the game with the sheer value it offers in terms of its hardware or aesthetics. A quick look at the spec sheet will tell you that the device is heavily inspired by last year's Narzo 20 as it shares not only some hardware but is also similar to the previous generation Narzo device when it comes to the display and to an extent even the design. Yet, this does not make the Narzo 30A a bad phone. In fact, in isolation, the device manages to impress both with its overall performance and design. Its cameras do leave a little to be desired, but that's something that is a fair trade-off for the low price point that Realme has launched the Narzo 30A at.