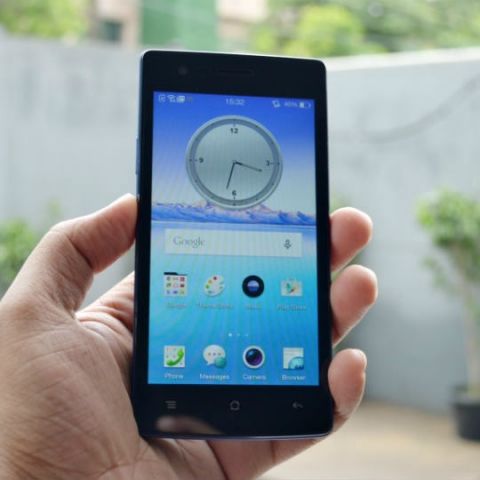 If phones are supposed to be priced according to their specs, then the Oppo Neo 5 is a mistake. If they're supposed to be priced based on performance, it doesn't live up to the Rs. 9,990 price tag. It is a mediocre phone, at a steep price and loses out in almost all aspects. Almost every smartphone in the sub-10k range is a better choice.

In a world where budget devices are getting better by the day, Oppo has launched the Neo 5 2015, a good looking and rather robust phone for the budget buyer. On first impressions, the phone feels good in the hand and UI feels snappy, but it has its issues. Let's find out. 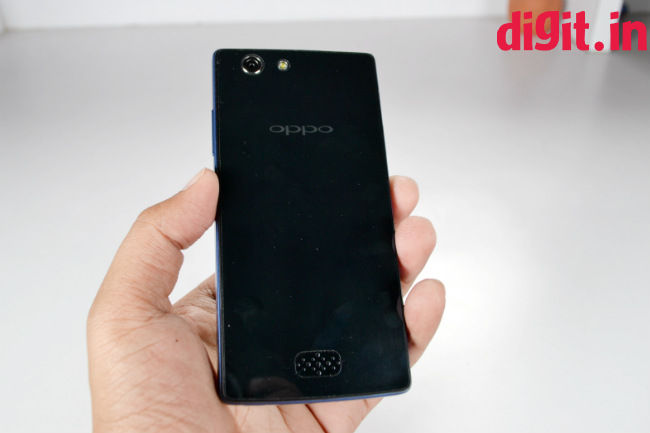 Build and Design
The device is made up of plastic and it tries to mimic the premium look and feel of the iPhone 4S. The fit and finish of panels and the power and volume rocker button, feel well put together. The smaller footprint of the phone makes it quite ergonomic and easy to hold, compared to other phones in its price range. 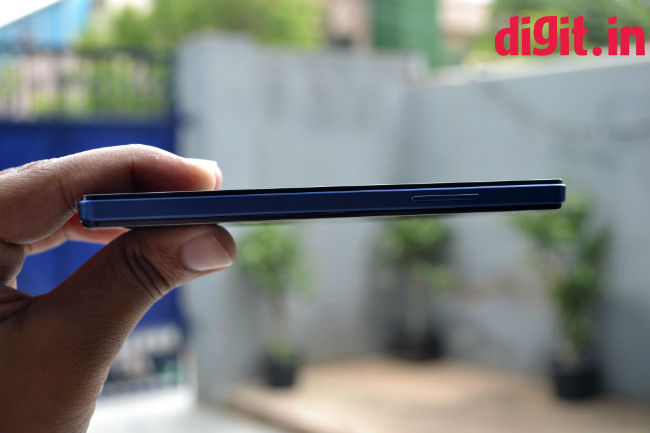 Design-wise, I think Oppo's is trying to play safe by mimicking a classic design like the iPhone 4S. And, even though it is plastic, it feels good enough. However, all its tricks fall apart one by one. The glossy back and front, which try to give an upmarket look are fingerprint magnets. In addition, the chamfered edges dig into your hands after prolonged usage. I must also add, the three navigation key at the bottom don’t light up.

Display and UI
While the build quality can still be considered decent, here onwards everything goes downhill for the Neo 5. The 4.5-inch display, which makes the phone easy to hold, has a resolution of only 480 x 854 pixels. This resolution is lower than almost anything at its price, since most of its counterparts have an HD display at least. Moreover, it is quite reflective as well. In normal usage, under the sun, I saw myself instead of the display, which was quite annoying when receiving calls or trying to text. Adding to this, the viewing angles and colour saturation of the display is average and I expected better from the company. Oppo has used better displays in many of its other phones. 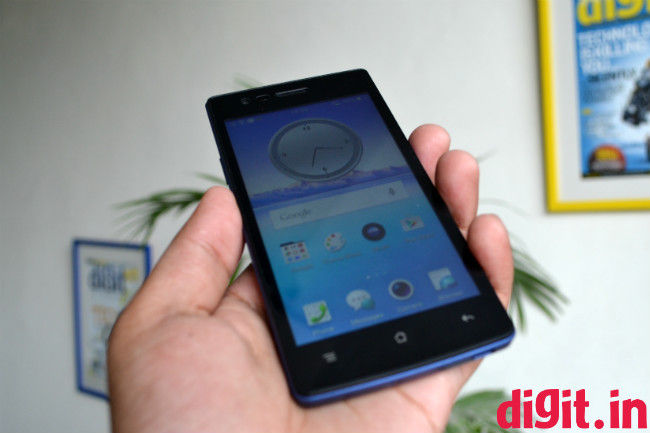 As for the UI, the phone is running Color OS on top of Android Kitkat. First of all, Oppo's choice to stay on Kitkat is a definite step back, given that almost every other manufacturer is providing Lollipop-powered devices. Coming back to the UI, it works and runs smoothly. There are plenty of good looking apps and icons, like the music app, but the UI feels a bit overdone at few places. For example, the Settings menu is divided into three different tabs. The animations across the UI take unnecessary time. Oppo could have made them faster but instead they perform in a rather slowly. Also, the lack of app drawer will be a deal breaker for some. The UI also becomes an issue in some other cases, which I will describe later. 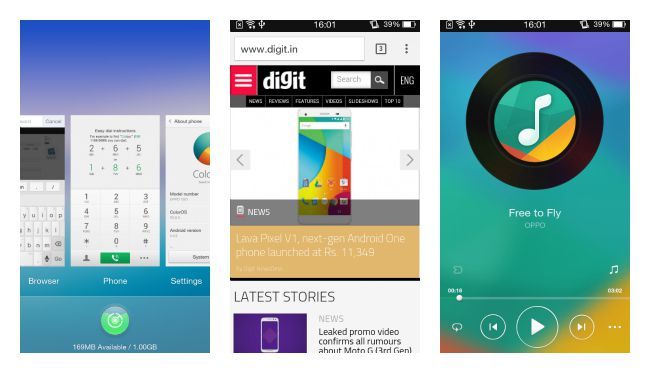 Performance
Like I said earlier, the UI on the phone runs smoothly and I felt no lag while navigating through it. Day-to-day performance is okay but there are occasional stutters. As for the hardcore gaming part, while the phone is not that powerful on paper, it is able to handle simple games like Temple Run, Subway Surfer etc. albeit, with occasional lags. However, at Rs. 9,990, phones like Yu Yureka Plus or the Honor 4C offer much better experience. Treading through the synthetic benchmarks, the phone does come out to be outmatched when compared to the competition.

As for the call quality, I found it to be okay. On the other hand, music playback via the loudspeaker or headphones felt unsatisfactory. The phone is not loud enough and won’t be able to please even the non-audiophile. It's actually even worse than the Honor 6, with Huawei's known volume issues. 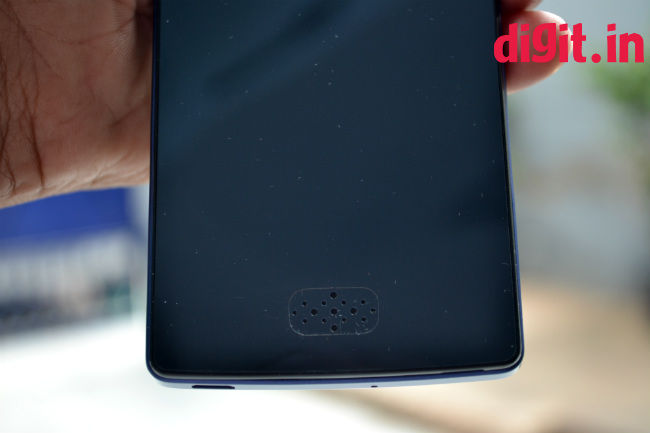 Battery
With below average performance so far, I wasn't expecting a stellar battery life and I wasn't surprised. In our normal battery test where we run a 1080p file on loop, the 1900 mAh battery lasts 6.5 hours. Using the phone as a daily driver I found the battery lasted about 12 hours at best, on a normal working day, which included bunch of calls, half an hour gaming, some photography moments and hour of video streaming via YouTube.

Camera
The camera is a greater disappointment though. The 8MP camera at the rear, overexposes images and leaves too much visible noise in pictures. Images taken, lack colour accuracy and have a less than average dynamic range. Low light images were equally poor and had too much noise. The flash is overpowering and ruins the images when used. The video camera is average and the front-facing camera looks like a VGA cam. 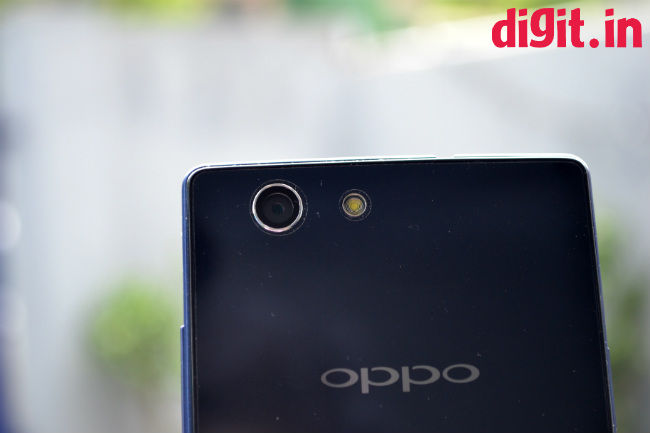 Bottomline
The Oppo Neo 5 is not a good phone to buy. There are plenty of options under the sub-10K price point, which offer almost twice the performance in every aspect. Compared to the Oppo Neo 5, even the Moto G (1st Gen) would be a good buy, while the newer, phones like the Yu Yureka Plus, Lenovo K3 Note or the Honor 4C. In fact, if this is the performance you want, then save some money and buy the Xiaomi Redmi 2 or Lenovo A6000 Plus.