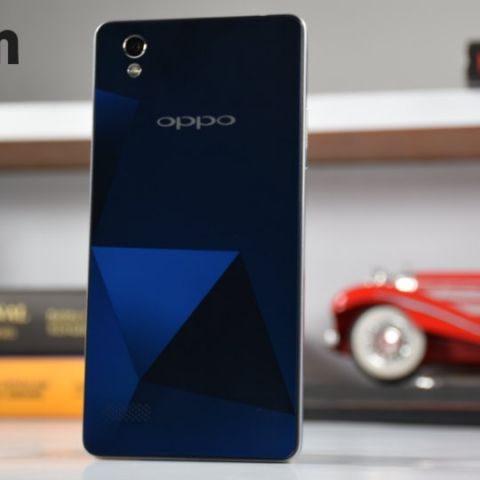 It is not the best phone in the segment, but that doesn't make it bad. The Mirror 5 is an average performer, all things considered. However, considering the prices and the overall performance of the phone, we suggest that you go for a better equipped phone.

The sub-10k smarthphone segment is the most competitive segment in India. It largely consists of phones that offer the best spec-to-price ratio in the market. However, a majority of these devices are sold online only. This leaves a lot of space in the offline retail market which can be exploited. This retail market is catered to by names such as Samsung, Micromax and so on. Most of the phones sold in this offline model are generally not as generously specced as their online counterparts. Amongst these, Oppo is trying to fit with its decently specced but good looking phones. The Oppo Mirror 5 is a fine example. On paper the phone lacks anything special when compared to category leaders such as the Xiaomi Mi 4i and company. But, is the phone good enough to make its mark in offline retail? We find out. 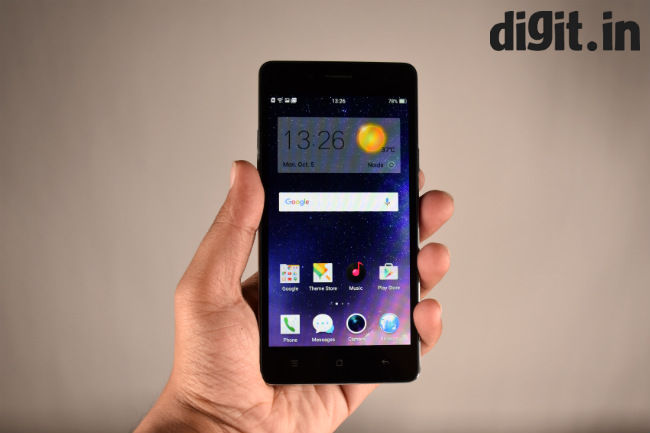 Design and build
There is no denying that the Oppo Mirror 5 is a good looking phone. The clean bar design and the distinguished back offer a fresh look. Even though the phone has a plastic exterior, the build quality is quite good. This is also partially due to the bi-metallic frame it uses, which adds rigidity and sturdiness. Two things we didn't like about it are, it doesn't feature a protective glass on the display and the physical buttons lack reasonable feedback. 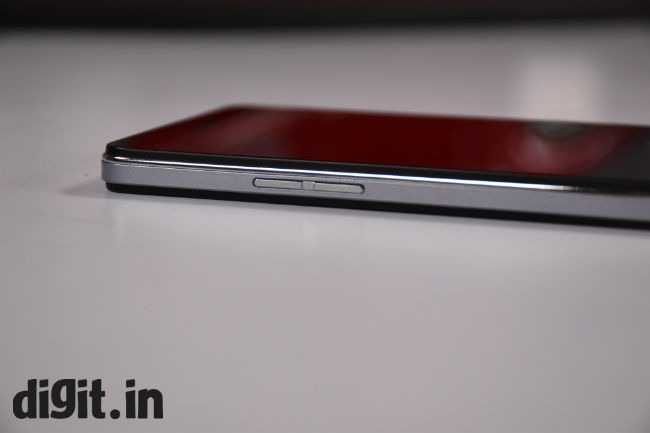 Display and UI
The 5-inch display on the phone has decent viewing angles. Colour saturation is good but the display is a bit dim for our liking. While visibility indoors is good, viewing the display under direct sunlight is a task. Touch sensitivity is good but the display gathers fingerprints quite easily, so does the glossy back. However, the biggest drawback is its resolution. At an asking price of almost 13K, it doesn't come with an HD display and makes do with just 960 x 540 pixels. Also, the Mirror 5 doesn't have backlit navigation keys. 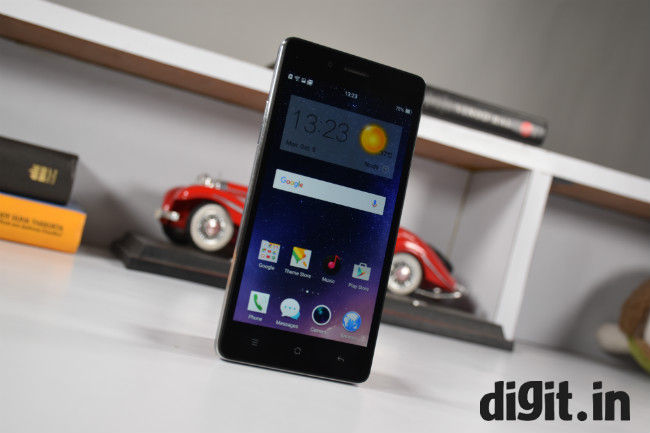 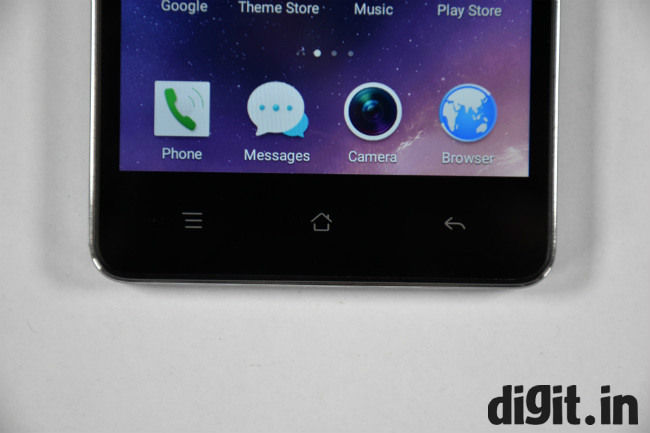 On the other hand, Oppo's ColorOS has become more intuitive than it was last time we saw it, on the Oppo Neo 5. It comes with nice iOS like icons and animations. Navigation through the UI is simple and various gesture controls work as intended. However, Oppo still needs to work on the UI and make the animations simpler and consistent throughout the UI. 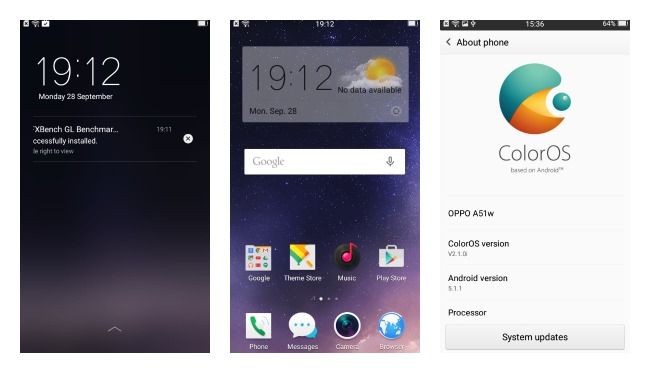 Performance
While using the phone for more than a week, we felt the Qualcomm Snapdragon 410 SoC in the phone was well optimised and was able to handle all day to day tasks we threw at it. Gaming performance was not that bad either but prolonged gaming did make the phone stutter occasionally. The thing is, that a Snapdragon 410 inside performs on this phone as good as it does on the Lenovo A6000 Plus, which we reviewed a while back. However, the sub-13K price bracket has much more powerful phones like the Asus Zenfone 2 or the Xiaomi Mi 4i which offer more value. Now, As expected the synthetic benchmarks further solidify our findings.

Oppo Mirror 5 | Create your own infographics

Calling capabilities are normal and so is the sound quality via headphones. The rear speaker on the other hand could have been louder.

Battery
Like the performance itself, the battery life is nothing groundbreaking. It is average at best and gives about 5-6 hours of screen on time. In our normal battery test, the phone died in about seven hours. Using the phone under normal day to day usage without gaming and we found that it was able to last us till the evening. Gaming on the phone takes down the battery much faster. An hour of gaming on this phone will eat a lot of battery. 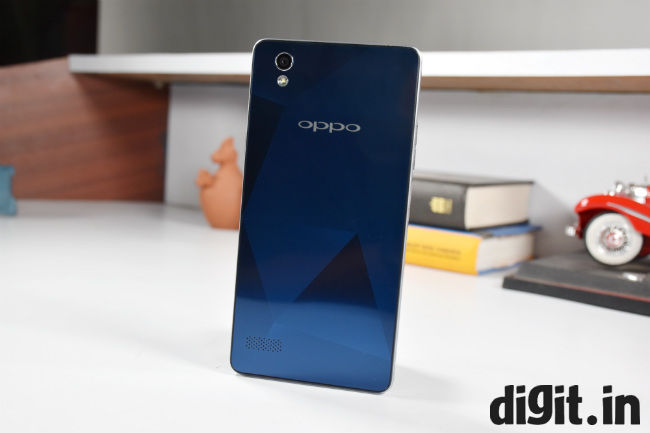 Camera
While most manufacturers have jumped to bigger sensors, the Oppo Mirror 5 is still sporting a just about reliable 8MP camera. Images taken showcase plenty of details and the focusing distance and dynamic range seem fine. Like many other phones, the colour saturation is bit on the warmer side. There is a 5MP camera at the front, which takes very good selfies in ample lighting conditions. 1080p videos shot by the camera are likeable, but nothing out of the ordinary. Overall, the camera is passable.

Bottomline
On a day to day basis the Oppo Mirror 5 is able to do almost every task a more smartphone should do. It is a beautiful phone and has a decent camera but on every other front it comes out to be an average achiever when compared to other phones in the segment. And, with so many better choices around, the wise decision would be to skip this phone and buy something like a Asus Zenfone 2 or even cheaper Meizu M2 Note.