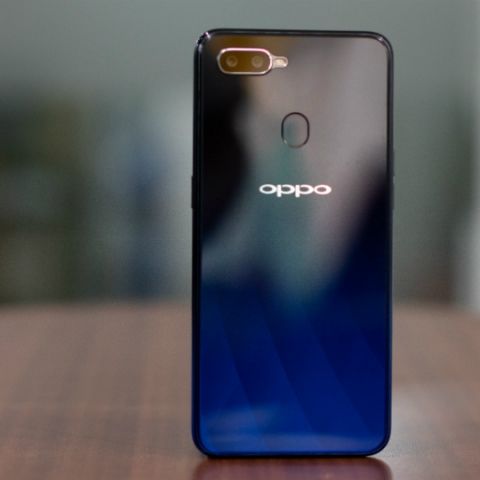 The Oppo F9  Pro certainly looks stunning. The design including the gradient glass back and the water drop notch does make the phone stand out. The new UI also helps make the phone look more premium. But it’s performance leaves a lot to be desired, especially considering the price it’s offered at and the competition. The Snapdragon 845-powered Poco F1 is available at a lower price point while the Nokia 7 Plus is an all-rounder in terms of performance and imaging. The primary (if not the only one) reason to get the Oppo F9 Pro is for its selfie camera that relies on extensive AI algorithms to deliver results that are both eye-pleasing and well-detailed. The VOOC charging tech is also nullified somewhat by a poor battery life. Get this only if you are a selfie enthusiast and consider your smartphone to be a fashion statement.

In 2018, there’s a thin line between a fashion statement and a smartphone for daily use. With how the designs are evolving, the line is only going to get murkier. Take the Oppo F9 Pro for instance. The company calls it a work of art. And for the most part, it is. Oppo clearly has spent a lot of time refining the design of the phone. You get a whole new notch on top of the display and gradient colour patterns. It clearly looks different and in the price range it launched at, the Oppo F9 Pro does have a lot of competition. It’s new from the inside as well with an updated version of ColorOS based on Android 8.1 Oreo and super-fast VOOC charging. It also happens to be the first phone in Oppo’s F-series to feature a dual rear camera. That’s a lot of new things for the Chinese upstart, but how do they add up in the larger scheme of things? Let’s find out. 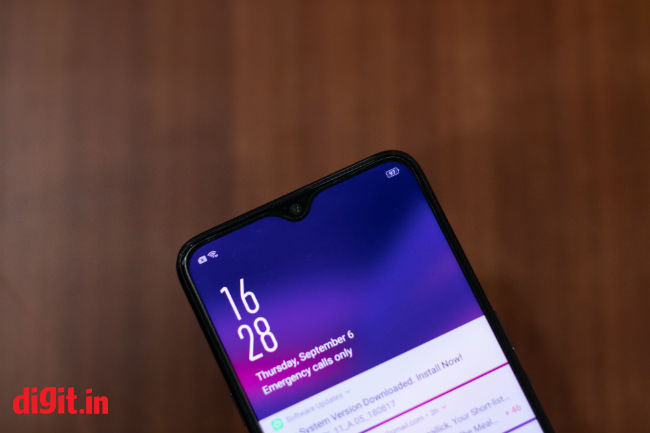 The Oppo F9 Pro does look like a work of art. The phone is offered in Sunrise Red, Twilight Blue and Starry Purple. Each variant has a gradient of colours based on red, blue and purple, respectively. We received the Twilight Blue variant for the review but my eyes were on the Starry Purple. The first two variants take the diamond-shaped pattern from the Oppo F7 and refine it further, making it look ever so subtle. The colour also changes from royal blue to a darker shade as you go upwards. Even the metal rim holding the glass-sandwich design has the same gradient colours. The dual camera unit has silver accents around it. The design is possible because of a glass-back and since Oppo didn’t advertise about a protective layer, it’s safer to put a case on it. Up front, there’s a new notch. Well, a new shape that is. Depending on what you think about the notch, it could be annoying as hell or you’ll be indifferent to it. The notch on the Oppo F9 Pro is shaped like a water-drop. The top of the screen dips slightly from the middle. It’s no longer a long black bar on top, and that provides the screen more real-estate. As a result, the Oppo F9 Pro’s screen takes up 90.8 percent of the body. There are minimal bezels all around, making the screen really immersive. The keys on the edges are slightly wobbly and feels plasticky. Also, despite having a slim 8mm body, the F9 Pro finds space for a 3.5mm headphone jack. The Oppo F9 Pro’s design is most definitely one of the reasons to buy the phone, but can’t be the only reason to buy it. 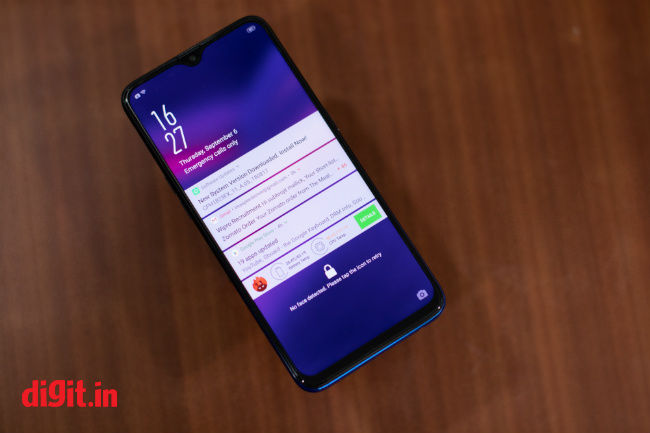 The Oppo F9 Pro’s new water-drop notch makes the 6.3-inch panel look a lot more immersive. It uses an LTPS IPS LCD display and there’s no noticeable difference from the usual IPS LCD panels. The screen has an aspect ratio of 19.5:9 and FullHD+ resolution. The colours come out nice and vibrant with a cool blueish tint on top. It’s quite bright too and is perfectly visible outdoors under direct sunlight. There is a distinct black border at the bottom that sort of eats away from the real estate. Furthermore, because of the new notch, it may seem like you’ll get a bigger display, but in reality, the content will be cropped in the shape of the notch from the side. So, if you’re watching a video, it won’t be seamless and will have a waterdrop-shaped interruption in the middle. And if you’re playing games like PubG Mobile, high chances the controls will be cropped partly too. In my opinion, the new notch doesn’t really solve the problem notches inherently have. It does add to the design of the phone, I’ll give you that. 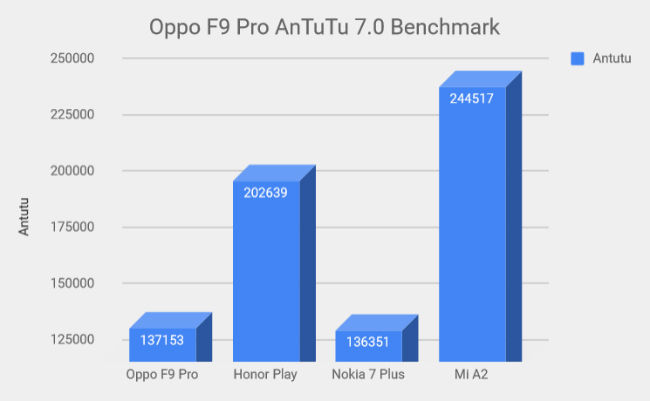 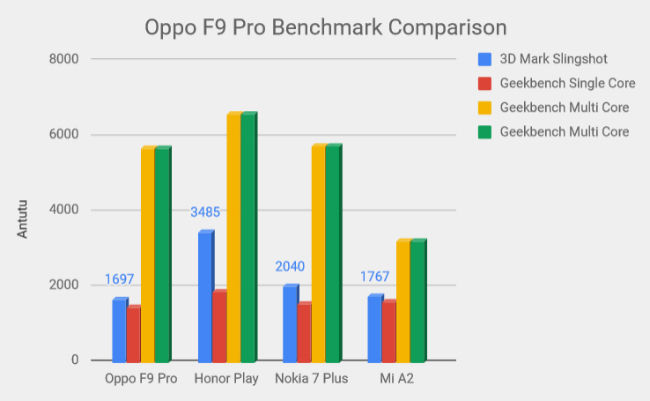 While the design and the display are certainly new, the chipset powering the Oppo F9 Pro is MediaTek’s top-of-the-line Helio P20 SoC. The chipset has been used in devices in the budget segment as well in high-end phones, and has been there for sometime. It’s a 64-bit octa-core chipset based on TSMC’s 16nm process and can clock all the way up to 2.3GHz. There’s a Mali-T880 GPU and a dedicated co-processor for handling machine-learning tasks. It’s performance is at par with what you would get from last year’s Qualcomm mid-ranger chipsets like the Snapdragon 625, and doesn’t really compare well with the Snapdragon 660-powered phones like the Nokia 7 Plus and even the Poco F1. The benchmark results show just that.

In real-life, the F9 Pro is capable enough in handling day-to-day tasks like browsing, taking photos and checking social media. There’s 6GB of RAM and 64GB of storage with a dedicated slot for expandable memory. Even after intensive use, you still have around 1.5GB of RAM available all the time. That allows the phone some breathing space when you are using it intensively. Games like PubG Mobile and Asphalt 9 run without much of a hitch, although the popular battle royale game runs on medium graphics settings to begin with. Gaming also drains the battery much faster and I could play only two sessions of PubG Mobile with 40 percent charge.

The F9 Pro also ushers in a new version of Oppo’s UI called ColorOS 5.2. It’s a lot more refined and looks more mature. Gone are the cartoonish icons, but the app drawer is still missing. There’s new gesture-based navigation and some interesting security features like a fraud-filter (that lets you block phone numbers), fake base station blocking (to prevent fraudulent messages), and caller ID. Furthermore, you can have floating windows, dual apps, private space and more. Overall, the UI is quite feature-rich and now looks a lot more polished. 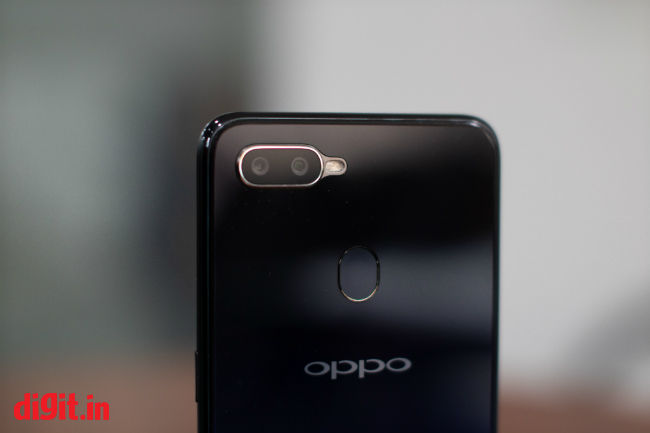 The Oppo F9 Pro touts a dual camera unit at the back and a single 25MP front camera. On the back, there’s a primary 16MP sensor and a 2MP secondary sensor for depth-sensing. Quite expectedly, it uses the chipset’s NPU to deliver AI-based enhancements to the photos. Oppo claims the phone can detect 16 scenes and apply the relevant settings. Up front, there’s sensor-based HDR and AI Beautification 2.0. The focus, as with most Oppo devices is on taking good selfies. And in that regard, the F9 Pro can make you look a lot better than you usually look. It uses AI algorithms to control the backlight, enhance the facial features and what not. The rear camera also has iPhone X-like portrait lighting effects, but they hardly work as advertised. 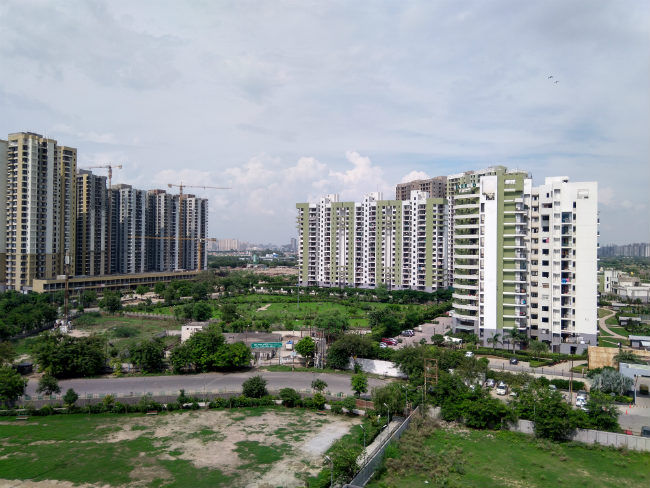 In daylight, the photos come out fairly sharp and vibrant. The HDR works to increase details in the shadows and the resulting images are at par with most high-end photos when the light is optimal. It also focuses quite fast thanks to PDAF. 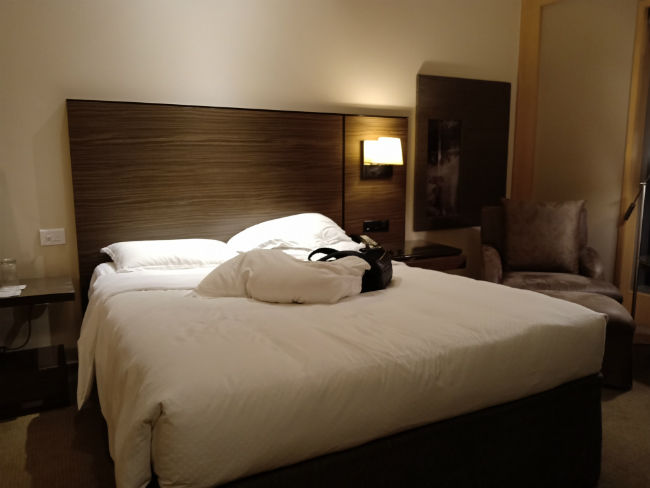 Indoors, the camera does take a little time to focus, but there’s no shutter lag meaning you can quickly take a snap. The details are also quite well-preserved with little to no noise. It’s difficult to know whether the AI is working because there’s no way to turn the feature off. 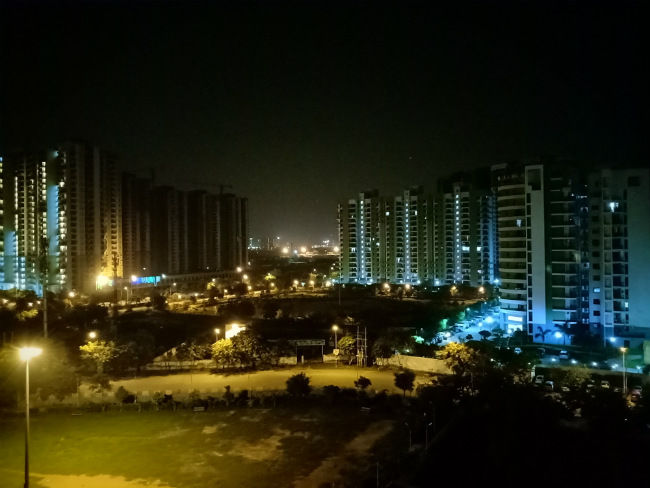 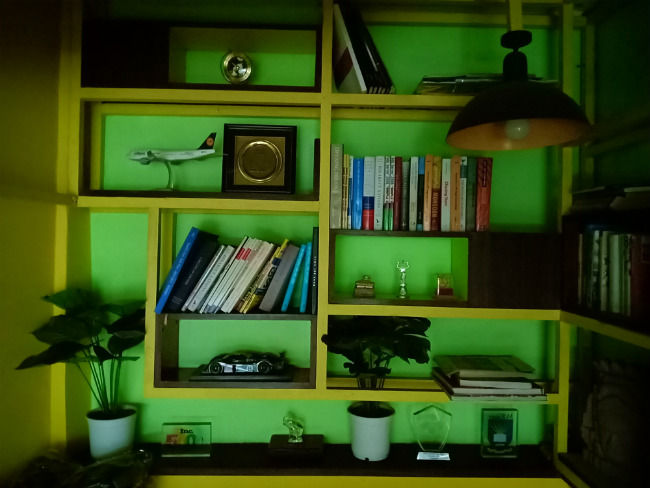 As for low-light, the camera can reproduce the scene quite well using aggressive noise-reduction algorithms. There’s heavy softening in the dark, shadowy regions because of this, but the overall photo gives a pleasing effect. It’s not the best low-light camera in that price range, but you can work with it. 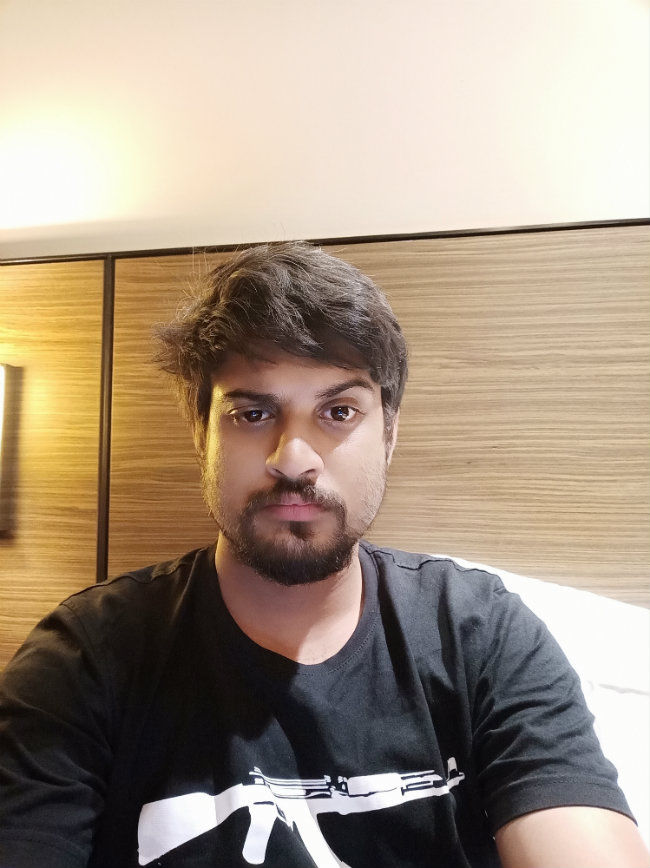 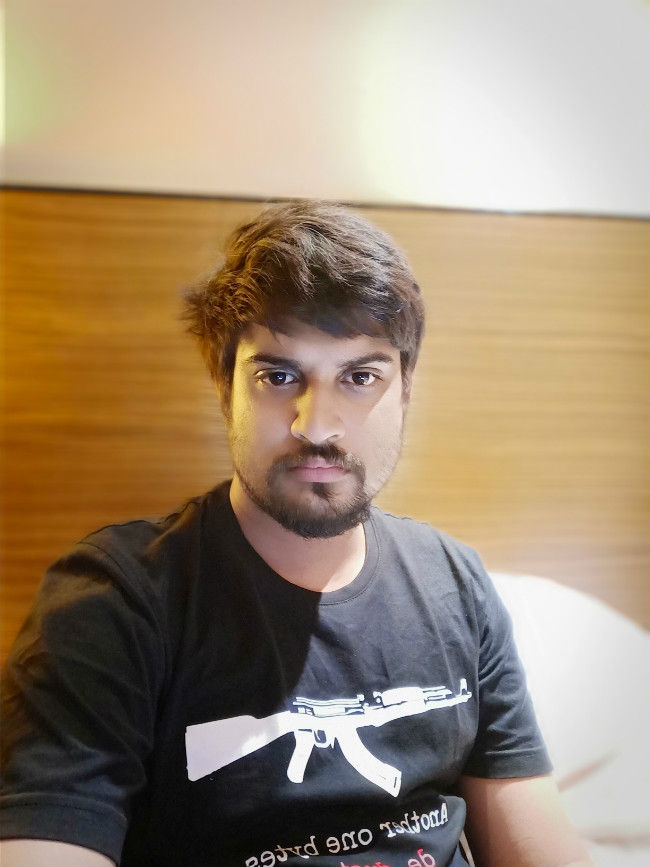 Selfies are the biggest part of the package. The F9 Pro can take well-detailed selfies in which you do look much better than you actually are. The HDR function works to recover details from harsh light, but more importantly, the software algorithms make your face the center of attention. The algorithms can also detect your arms and neck to apply the effects consistently in the photo. If you like to take a lot of selfies, the F9 Pro is the device to go for at the moment in that price range.

The Oppo F9 Pro brings back the company’s proprietary VOOC charging technology to the F-series. It was seen in the first F-series phone a couple of years back and then it just disappeared. It’s supremely useful and offers and experience similar to what OnePlus users get. It relies on low-voltage fast charging to top up the 3,500mAh battery in a little over an hour. Furthermore, Oppo offers a five-layer protection right from the charging unit to the cable to the phone itself. This includes a voltage tester in the adapter and the phone, fuse and VOOC identification firmware to prevent excess current draw.

During my usage, the VOOC charge really helped. I could plug in the phone for 15 minutes and get around two hours of controlled usage, gaming excluded. In our PC Mark Work 2.0 Battery test, the Oppo F9 Pro lasted 4 hours 25 minutes. That’s comparatively much less than what phones like the Nokia 7 Plus and even the Poco F1 offers. If not for the fast charging tech, the F9 Pro’s battery life would be dismal.

In real-life usage as well, the phone lasted the typical work day (10AM to 7PM) with moderate to heavy use. If you’re looking for a phone with a long battery life, this isn’t the best option to go for.

The Oppo F9  Pro certainly looks stunning. The design including the gradient glass back and the water drop notch does make the phone stand out. The new UI also helps make the phone look more premium. But it’s performance leaves a lot to be desired, especially considering the price it’s offered at and the competition. The Snapdragon 845-powered Poco F1 is available at a lower price point while the Nokia 7 Plus is an all-rounder in terms of performance and imaging. The primary (if not the only one) reason to get the Oppo F9 Pro is for its selfie camera that relies on extensive AI algorithms to deliver results that are both eye-pleasing and well-detailed. The VOOC charging tech is also nullified somewhat by a poor battery life. Get this only if you are a selfie enthusiast and consider your smartphone to be a fashion statement.