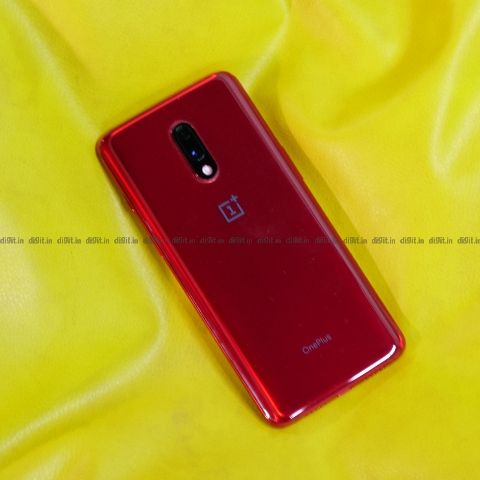 The OnePlus 7 is the phone to get if you prefer the OnePlus brand and hope for flagship performance. The camera is where the phone falters but it makes up for that with the display, design and performance. 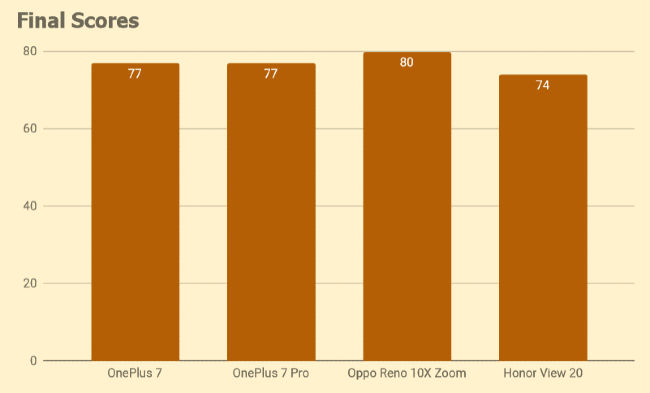 Read the full review to find out more —

With the OnePlus 7 Pro now becoming the de facto flagship of the company, OnePlus in 2019 is a changed company with one foot on the premium side while one still drags along the lines of a budget flagship. Not to forget its roots, OnePlus announced the regular OnePlus 7 alongside the Pro version with some obvious downsizing. The company went from launching one flagship smartphone a year, to a 6-month refresh cycle and now, we have two OnePlus phones vying for your attention at the same time. It’s no longer the case where one device will get all the attention. Instead, the focus was divided between two — Everything’s that’s premium (90Hz display, triple cameras) will be present in the Pro variant while everything that isn’t (a regular AMOLED display, dual cameras) will be reserved for the regular variant. Does this bode unwell for OnePlus fans? You still get the flagship Qualcomm processor along with more RAM and storage that you can possibly put to use, but here’s the thing. The OnePlus model of success is now copied by almost everyone. Sitting in the second half of 2019, we have more flagship phones south of Rs 50,000 than above it, and while that’s definitely a good thing for the consumer, it’s something OnePlus would probably be spending a lot of sleepless nights thinking. So with the OnePlus 7 now coming in a crowded space, does it still hold the same promise as before? Let’s find out. 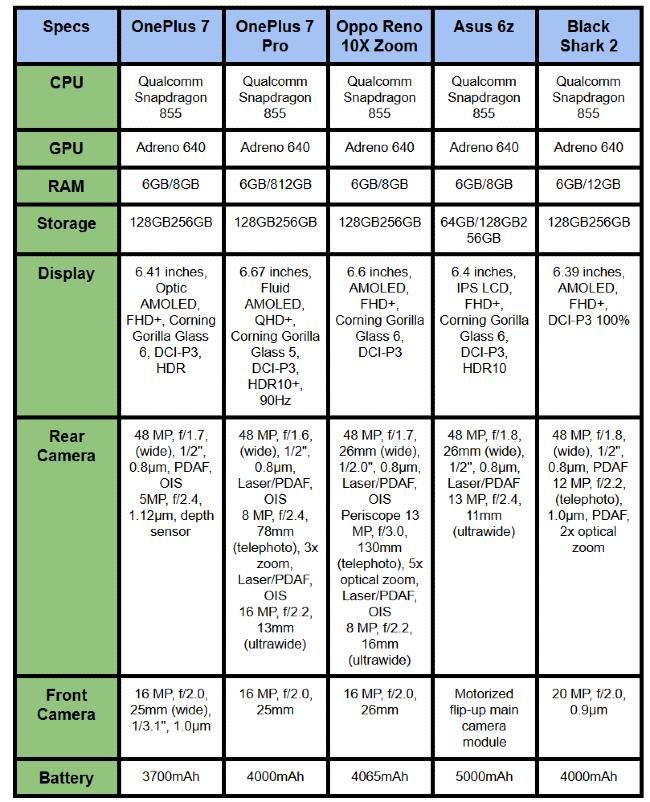 The OnePlus 7 is pitted against the Asus 6z, Oppo Reno 10X Zoom and the Black Shark 2. The upcoming Redmi K20 Pro will also give tough competition to the smartphone. All of these devices are powered by the Snapdragon 855 processor and as such, good flagship performance is more or less guaranteed. Where the OnePlus 7 excels is in offering a good software experience. It’s better than most budget flagships out there. OxygenOS 9 stays updated regularly, offers smooth, lag-free performance and a minimalist design. However, the OnePlus 7’s camera might not be up everyone’s taste. The Oppo Reno 10X Zoom’s camera, in my opinion, offers punchier, more vibrant colours and the flexibility to go up to 10X zoom and 120-degree wide-angle. The Asus 6z is also unique in its own way. The flip camera on the phone doubles up as both the rear and front camera, with the same 48MP camera coming on both sides. The OnePlus 7, as a result, stands out, for covering the basics really well and offering just a little bit more in terms of uniqueness.

Let’s start off with the most important aspect first. The performance of the OnePlus 7 is pretty flawless while the battery life is enough to power through the day. The Snapdragon 855 inside the phone is coupled with up to 8GB LPDDR4X RAM and 256GB UFS 3.0 storage. There’s no question of the phone slowing down anytime soon. The components OnePlus has used in this are the same as the Pro variant, save for the lack of a 12GB RAM variant. As a result, the performance of the phone is one of the best on an Android device. Credit should also be given to OxygenOS that’s based on Android 9 Pie and brings onboard interesting optimisations that ultimately result in faster app launches, unlock and boot-up and the likes. Having said that, if you are coming from the OnePlus 6 or the OnePlus 6T, it’s likely you won’t notice any significant boost in speed.

Benchmark analysis reveals the OnePlus 7 is just as fast as its sibling and even ahead in some cases when compared to other Snapdragon 855-powered phones. You can see the scores projected in the graphs below to get a better idea of where the OnePlus 7 stands. For a more detailed analysis, check out our performance comparison between the Asus 6z, Oppo Reno 10X Zoom and the OnePlus 7. 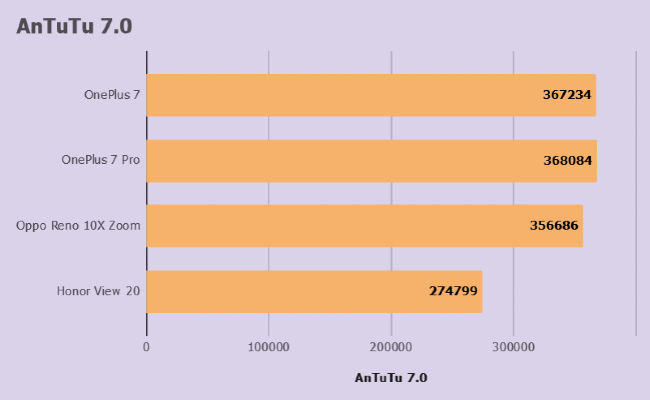 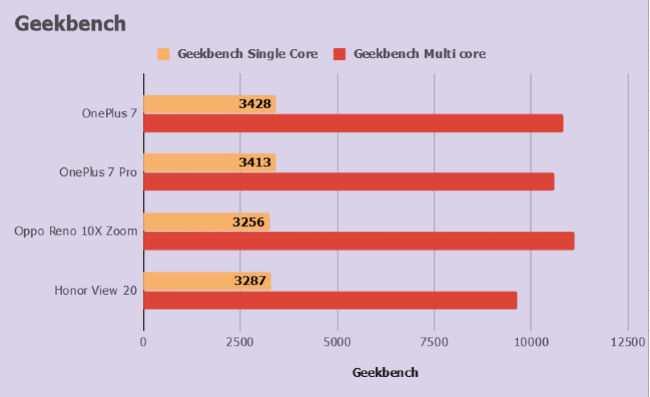 Part of OnePlus 7’s blazing fast speed is also because of the software the phone uses. It’s a customised take on Android 9 that’s very close to the stock Android interface in terms of the aesthetics and there are deep-seated optimisations in place that make the phone run super smooth. On top of that, there are now a handful of India-centric features like parking location, live cricket scores and a dedicated gaming mode which frees up resources, puts calls and notifications on hold and the likes. Then there’s the Zen Mode which I found particularly useful. When the mode is turned on, you can’t do anything on your phone for 20 minutes. The aim is to wean users off smartphone addiction and while it pretty much failed to do so in my case, the mode did allow me to focus on my work much better. 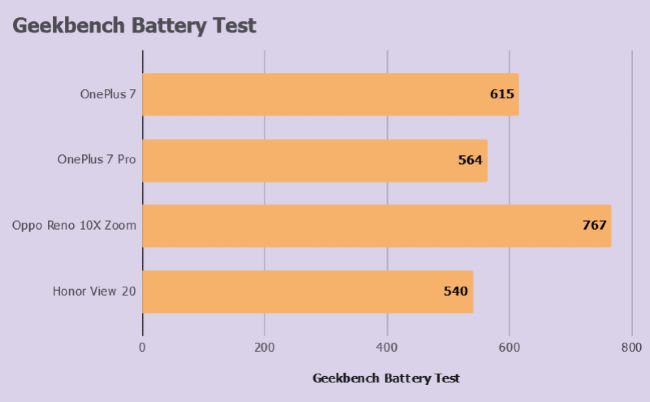 The 3,700mAh battery on the OnePlus 7 is the same as its predecessor. But while the capacity is the same, there is a slight increase in the screen-on time, thanks to the 7nm efficiency Snapdragon 855 brings to the table. On Geekbench Battery Test, it took around 10 hours 15 minutes to drain the battery while 15 minutes of PUBG Mobile drained the battery by around 5 percent. On the other hand, 30 minutes of Netflix (with HDR on) drained 7 percent battery and an hour of navigation brought down the charge by 8 percent. These are decent numbers and in line with most other Snapdragon 855-powered phones, so the efficiency is more or less at par with other budget flagships out there in the market.

The camera is the second most important thing in a smartphone. Straight off, it becomes clear the OnePlus 7 Pro was what the company was more focused on, while the OnePlus 7 camera comes off as an afterthought. The 7 Pro’s triple-camera offers flexibility with an ultra-wide angle lens, a 3X telephoto lens and a 48MP primary sensor. For the OnePlus 7, only the 48MP sensor was brought down and paired with a 5MP depth sensor. By default, you are restricted to shooting either the regular wide-angle photos or portrait shots with blurred backgrounds. There is 2X zoom, but that’s digitally acquired and doesn’t offer the same quality as optical zoom. 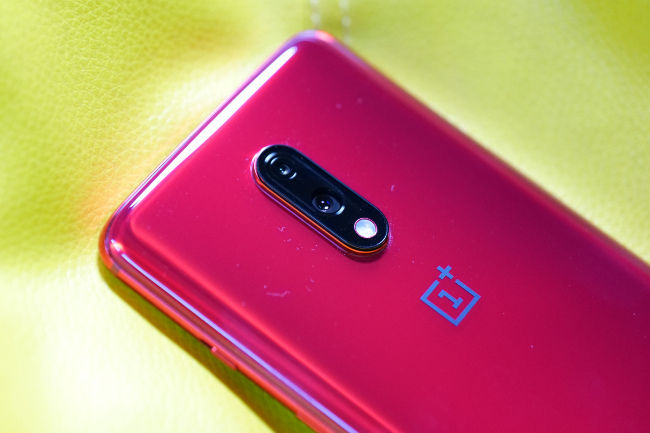 As for the images themselves, they carry the typical OnePlus look. Neutral colours, excellent HDR performance, and now extra sharpness thanks to the pixel binning that the camera performs by default every time it takes a photo. As such, the OnePlus 7 camera is pretty reliable in taking landscape photos, but struggles to take close-up shots. The AF system in the 48MP sensor has difficulty locking focus even after tapping the region you wish to be focused. For instance, in the photo below, you can see the branch being in focus while the flower is blurred out despite both being approximately at the same distance. 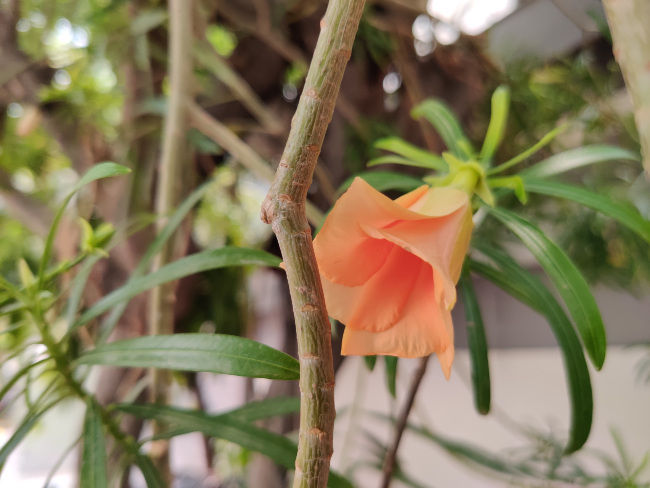 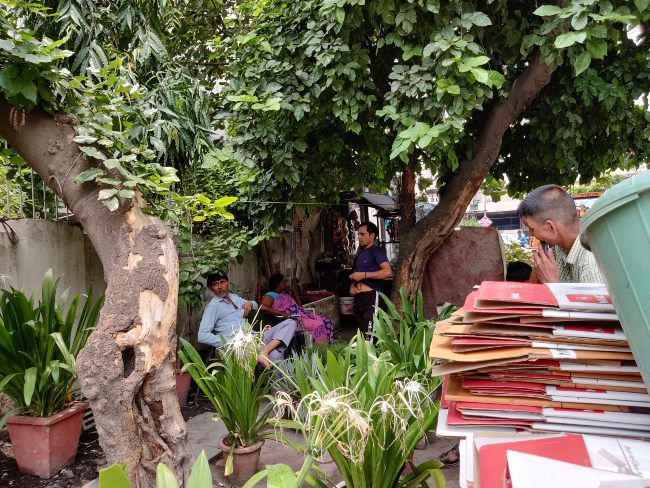 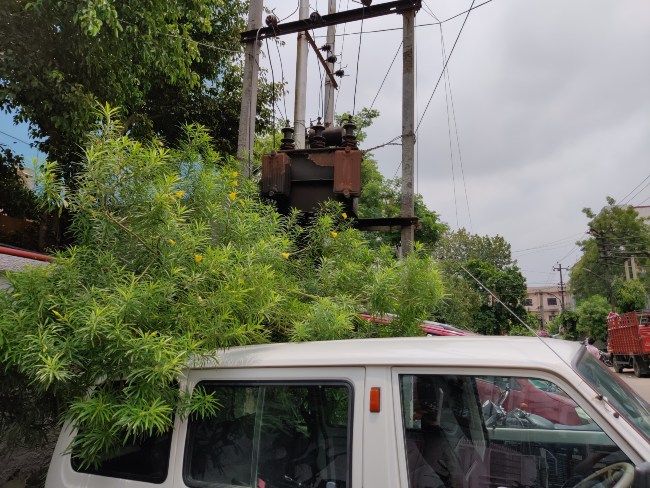 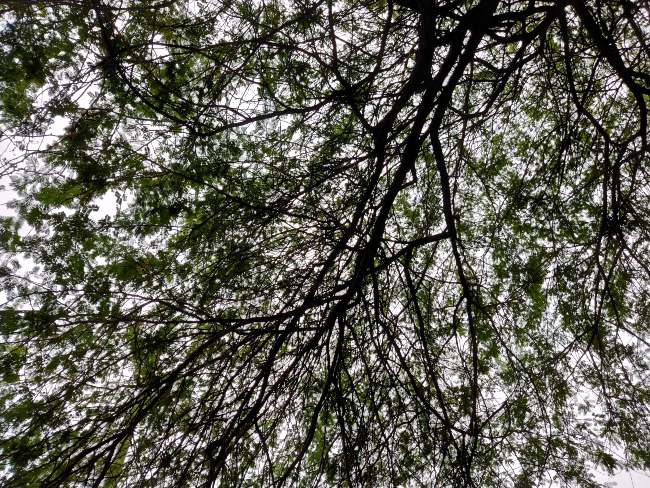 There’s OIS in the camera which helps take a stable shot when zoomed in, but it particularly helps while shooting videos where the OnePlus 7 does a decent job and focusing is much more reliable. This could just be a bug in the camera software and if highlighted, could be fixed via an OTA update. 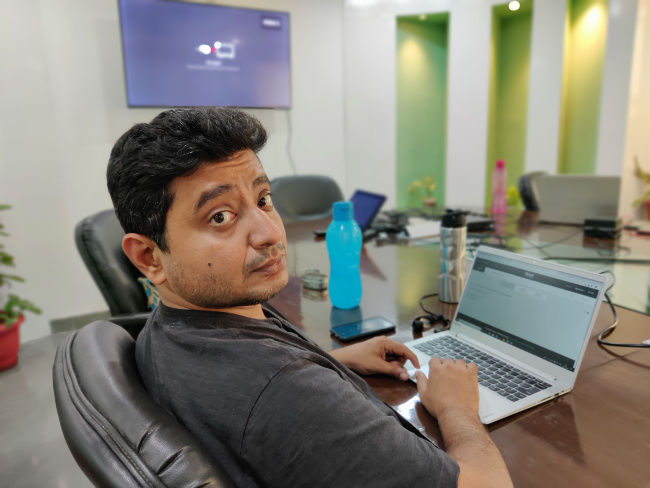 Then there’s the portrait mode. The feature has mostly worked well on previous OnePlus phones, at least when assisted with enough light, and on the OnePlus 7, it works well in objects that are near the camera. Objects that are a little further away has inconsistent subject separation which is ironic considering the only use of the secondary 5MP depth sensor is to get better depth of field. 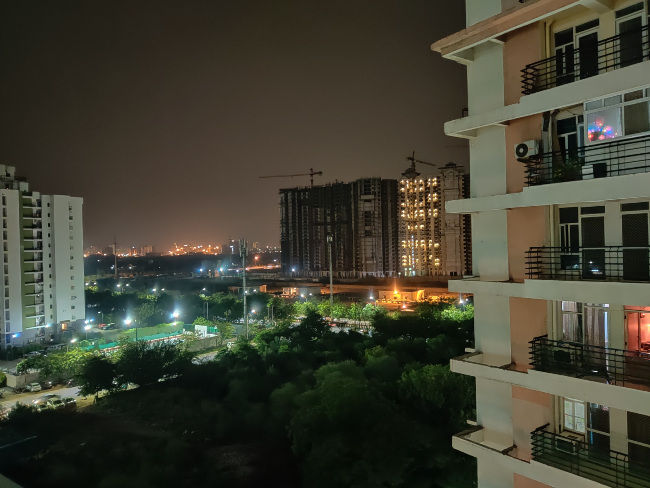 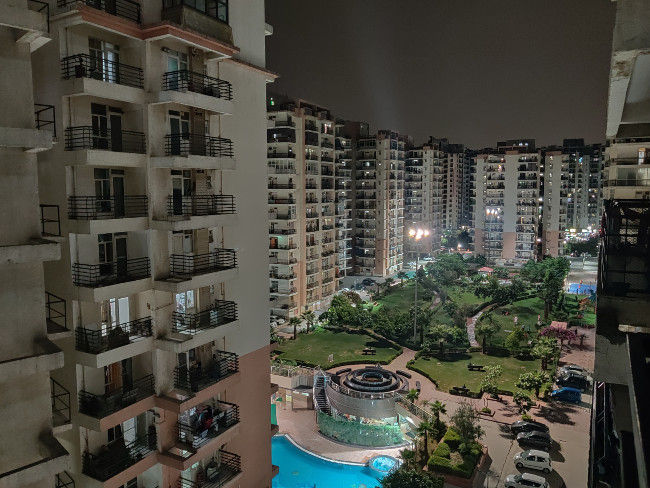 There’s also the nightscape mode which works pretty well, but not without its own flaws. For one, it takes a long time to shoot the image irrespective of the amount of light available. For instance, phones from Huawei, we have observed, take less time to shoot multi-frame night mode images when there’s at least some level of illumination. In case of the OnePlus 7, the number of shots, and as a result, the take time, is a constant. Thankfully, there are algorithms in place that controls the amount of exposure the shot needs. The shots are also sharper when you shoot with night mode (provided the subject is steady for the time it takes to shoot), but don’t expect too much out of them. Zooming into a nightscape shot will show the details are artificially rendered and touched up with a lot of noise reduction.

As such, the OnePlus 7’s rear camera stack is reliable, but not exciting. Around the price of the OnePlus 7, you have phones that come fitted with a wide-angle camera, while paying a little extra will get you all three lenses including a telephoto lens with 10X hybrid zoom.

Even though the OnePlus 7 is built out of glass, it feels pretty solid. There’s Gorilla Glass 5 on the back and Gorilla Glass 6 on the front allowing at least some level of protection. There’s a screen-protector built-in to the display that got scratched easily and the mirror red finish that we received for review looks pretty swell. Unlike the OnePlus 7 Pro that offers a new design, the OnePlus 7 is quite identical to the OnePlus 6T — A waterdrop notch, thin bezels, curved rear panel and a sturdy aluminum frame. What’s changed is the gigantic bump around the camera module that makes the phone wobble when placed on a flat surface. Otherwise, the button quality and the tactile response is pretty solid and gives a feeling of longevity. 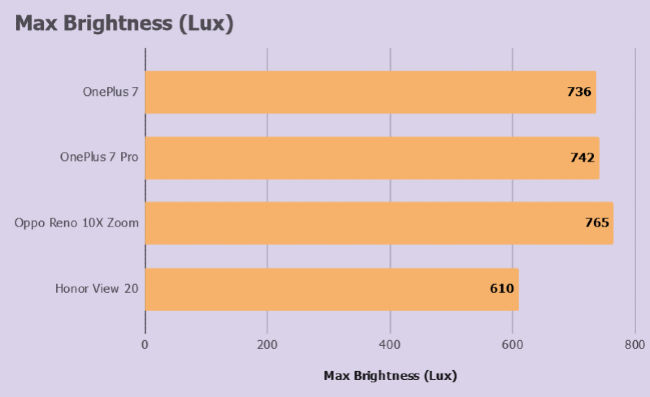 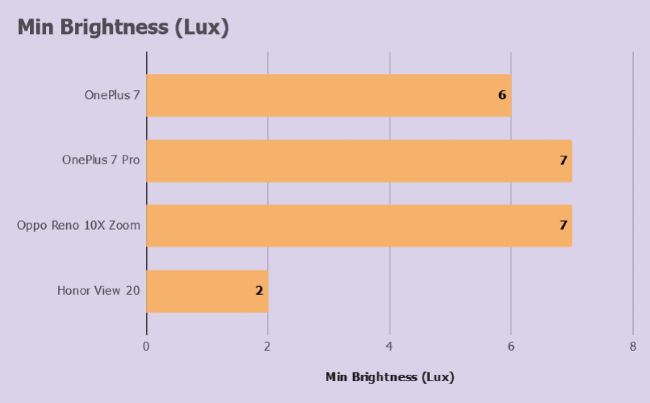 The OnePlus 7 doesn’t have an advertised IP rating, but OnePlus did assure there is some level of water resistance but water damage is not covered under warranty. What’s missing is the 3.5mm headphone jack but the dual stereo speakers have made their way to the OnePlus 7 as well along with support for Dolby Atmos. There’s also an in-display fingerprint sensor that’s visibly faster than the OnePlus 6T, and is pretty accurate too. However, face unlock still works faster and I hardly got the chance to use the in-display fingerprint sensor on the phone. 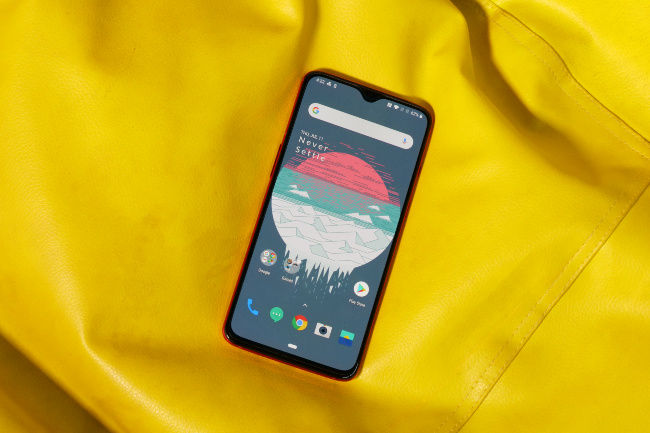 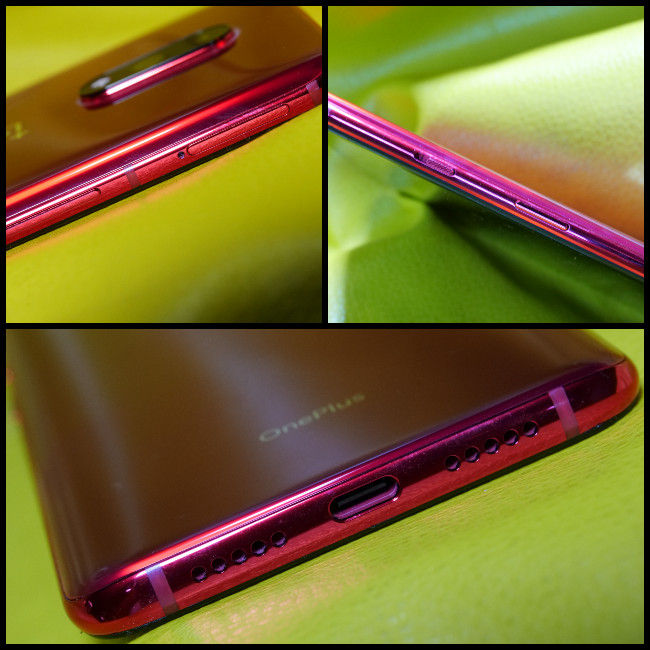