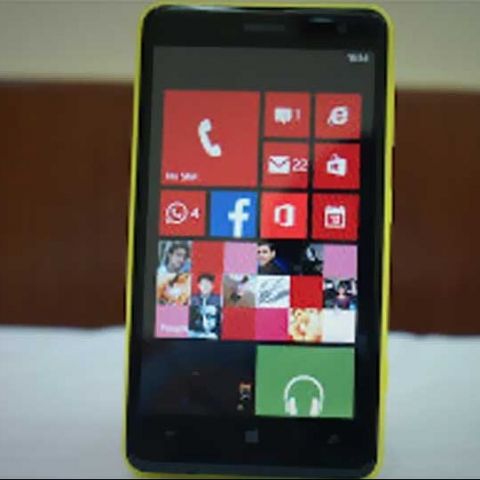 Itâ€™s hard to recommend the Lumia 625 especially since you have a great device such as the Lumia 720 available at a cheaper price. If you want to purchase a device under 20k running the Windows Phone OS, the Lumia 720 is a better package deal. If a large screen device is what you want, you have smartphones such as the Canvas Doodle 2, Xolo Q1000S and more at your disposal. Pick up the Lumia 625 if youâ€™re specifically looking for a large-screened WP smartphone.

Nokia has targeted almost all the price points with its Windows Phone offerings. We have the entry level Lumia 520 dominating the sub 10k entry-level category. We have the Lumia 720 that is a good buy for the Rs. 15,000 to Rs. 20,000 price segment and we have devices such as the Lumia 920 and the 1020 for the high end users.

To take on the plethora of large screen Android smartphones available in the market, Nokia has introduced the Lumia 625 for Rs. 19,000 with a 4.7-inch display – the largest yet on a Windows Phone device. Is it worth the price of admission?

At a glance
The Lumia 625 has the same polycarbonate shell found on its brethren but it isn’t of the unibody variety. The display of the smartphone is 4.7-inches with a 480x800 pixels resolution. It has 8GB built-in storage expandable up to 64GB via a microSD card. The rear of the phone has a 5MP camera and the front has a VGA shooter for video calling. The Lumia 625 has the Qualcomm MSM8930 Snapdragon chipset with a dual-core CPU clocked at 1.2GHz.

Here is a quick specifications comparison between the Lumia 625 and the Lumia 720, Xolo Q1000S, Lenovo P780 and the Canvas Doodle 2.

Design
Staying true to the Lumia lineage, the Lumia 625 has a polycarbonate back but the design isn’t unibody. You can rip out the back to access the battery, micro SIM and microSD card slot. The device comes in a variety of colours such as lime green, reddish orange, yellow, white and black. The front of the smartphone is black with the standard three capacitive buttons resting below it – back, home and search. The device has the microUSB port at the bottom and like all other Lumia devices, the volume rocker, power button and the physical shutter button rest on the right side. The buttons offer good feedback and are very sturdy – overall, the phone feels well built.

The edges of the smartphone are curved and the Lumia 625 in general doesn’t have a grip. I found the smartphone slithering out of my hands every now and then. Thanks to the strong build, it wasn’t damaged even once.

The Lumia 625 has the largest display we have seen on a Lumia smartphone at 4.7-inches. Placed next to the Nexus 4 (which has the same display size) the Lumia 625 looks really bulky. It is relatively thick at 9.2mm in thickness and weighs 159 grams, which isn’t the lightest.

Even though the phone is bigger than the Nexus 4, it is still comfortable to hold and use with both hands as well as single hand use. The design is traditional Lumia with the exception of the large display.

UI and preloaded apps
The Lumia 625 runs on Windows Phone 8 upgradable to WP8 Amber. The UI is the same as on any other smartphone running Windows Phone 8. The live tiles dominate the home screen and you can resize them, change their locations and colours and that’s about it. The customization options available on Android and even on iOS 7 are a lot more in comparison. Nonetheless, if simplicity is the way for you, then Windows Phone can be a good consideration.

Nokia is offering customers movies worth Rs 4,275 with the Lumia 625. Users of the device will also get access to 10GB of free data over Wi-Fi at McDonalds, Subway and Cafe Coffee Day. The company is offering 3GB free 3G data for three months on the Tata Docomo network.

The device has the Big Flix app preloaded and the content can be accessed with a simple click to play. The line-up of films available will appeal more to the Bollywood fan boys. Streaming movies on the device was a breeze. The connection on which we tested was a 4Mbps broadband connection.

Unlike Android where the OEMs have the ability to add customizations and skins to the OS, the Windows Phone UI is universal across devices. This is a good thing, as you don’t have to learn anything new. It is also limiting if you are one who likes to play around with customizations on the phone.

Performance
Starting with the display, the Lumia 625’s is 4.7-inches with a resolution of 480x800 pixels giving it a pixel density of 199 ppi. Nokia hasn’t implemented its Clear Black display technology and images and videos do appear a little washed out on the display. We have seen other devices such as the Xolo Q1000S show off a 5-inch 720p display where content looks a lot sharper. MP4 files ran smoothly on the smartphone. The viewing angles and reproduction of colours are good in indoor conditions, but there is loss of sharpness while watching the videos thanks to the low resolution of the display.

Under direct sunlight, the performance of the display is average. It is reflective and you may need to set the brightness on max for it to be usable.

Having said that, the response of the touchscreen is one of the best we have seen on a smartphone. It responds to the lightest touch. The layout of the keyboard on the smartphone too is very good. Typing was accurate, comfortable and a lot of fun. The Corning Gorilla Glass 2 protects the display from scratches and the odd impact.

The games library is limited on Windows Phone but the ones that are available here work well on the device. You do have access to the popular games such as Temple Run and Angry Birds and playing the games is a treat on the smartphone.

The Lumia 625 also comes preloaded with a bunch of apps such as Nokia Maps, Nokia Care, Nokia Music, Nokia Smart Cam, Trip Advisor, and Your Movies.

With Nokia Music you have access to a large library of songs that you can download on the smartphone and listen to for free. If you are into Hindi music, then this store is perfect for you.

Nokia Maps gives you the ability to download the maps for offline navigation. I used the maps and they are as good or as bad as Google Maps in real world usage. The good thing is that the navigation app came up with redirections really fast if you took a wrong turn.

The specifications of the Lumia 625 aren’t ground breaking when compared to what the Android competition has to offer but it is enough to run the OS very smoothly and the apps that are on offer with the Windows Phone Store.

The camera on the rear of the Nokia Lumia 625 is 5MP and its performance can be described as average. In well-lit conditions, especially outdoors, the camera performed well. In low-lit situations, there was loss of detail. The camera of the Lumia 720 however is way better.

The battery life of the Lumia 625 is quite impressive. It ran through the day with absolute ease and I didn’t need to connect to the charger until about lunch time, the next day.

Bottom Line
It’s hard to recommend the Lumia 625 especially since you have a great device such as the Lumia 720 available at a cheaper price. If you want to purchase a device under 20k running the Windows Phone OS, the Lumia 720 is a better package deal. If a large screen device is what you want, you have smartphones such as the Canvas Doodle 2, Xolo Q1000S and more at your disposal. Pick up the Lumia 625 if you’re specifically looking for a large-screened WP smartphone.