The Movil MC100 is a feature-rich touch-screen smartphone targetted at the multimedia segment, with the 3D-YAMAHA power amplifier being its top selling point. The neat and intuitive widget interface adds value for money and so does the increasingly popular mobile tracker application. At the price point of Rs. 4,499, the MC100 gives you true value for money sans the mediocre video camera. So, if you are not a die-hard fan of cameraphones and want something that gives you a taste of everything, then this one is for you.

The Movil MC100 enters the long list of dual-SIM multimedia phones, trying to grab the market share in the entry level domain. Marketing the “3D-YAMAHA power amplifier” as its top selling point in the multimedia domain, the Movil MC100 stirs up level-headed competition against the likes of Fly phone theatre MV135, which we have reviewed earlier. Topping it up with the touch-screen interface and widget applications, it makes a strong statement amidst the cut-throat competition in the mobile market today. So, if not anything it should give you some sleepless nights thinking about making that ultimate decision of buying one of these value for money cellphones. 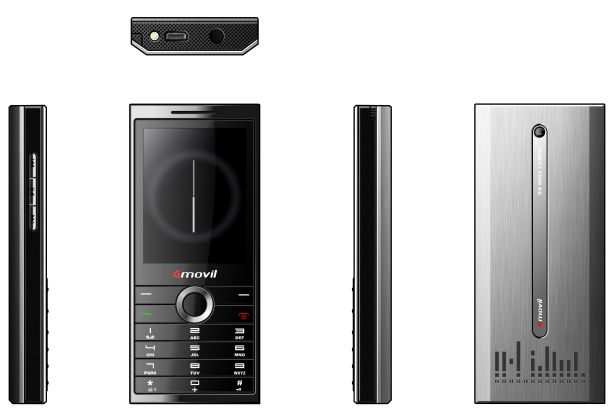 [RELATED_ARTICLE]For starters, it is a bit bulkier, trying to accommodate a higher capacity battery with a rating of 1350mAh and expected to deliver a factory rated standby-time of up to 280 hrs. It is well built, with a steel metallic coated plastic strip reinforcing the contours of the front panel and a black glossy finish decorating the keypad and the edges of the LCD screen. The ring structured navigation-control dial at the top of the keypad has a brushed steel metallic finish, that matches with the rectangular strip encasing the LCD screen and the keypad layout. The steel metallic finish on the media control buttons and the chrome-textured finish on the battery cover add a touch of class to the design aesthetics of the cellphone. Also, the textured glossy black finish on the top and bottom surface of the cellphone, presents a nice contrast against the steel versus chrome finish on the contours of the front and back-panels respectively. There is a 3.2MP camera located at the top-centre of the back-panel and two pairs of indented holes on either side, located at the lower portion of the back-panel represent the “3D-YAMAHA power amplifier” speakers.

The keypad layout mainly constitutes the ring structured navigation-control dial enclosing a circular select button and six strips of keys arranged in six rows, with narrow ridges separating one row from the other. We felt the striped keypad design more convenient for typing, as it provided enough room for comfortable finger navigation and access to the right keys. Also, the ergonomic keypad design yielded consistent tactile feedback and good response to the user input. Thereby, providing superior control over typing accuracy and avoiding the need to register the input multiple times.

However, the touch-screen interface is quite buggy and fails to register the input sometimes, particularly while unlocking the keypad lock. The review piece did not ship with the stylus making it absolutely difficult to use the touch-screen keypad and so we had type out the entire text in the old-fashioned way. Also, we could not calibrate the stylus and test its precision. The touch-screen has an intuitive widget interface representing the home screen side bar and a rich assortment of widgets including date, time, calendar, media player, memo, alarm, FM radio and SMS/call log list.

Read on to know the performance, conclusion, performance test results, ratings and more in the next page...

[RELATED_ARTICLE]The Movil MC100 had a decent outing in the signal reception and voice clarity test. It delivered consistent signal reception quality across all the three zones that we tested. However, the voice clarity wavered across the zones two and three, particularly with the device ear piece and the loudspeaker. The hands-free clarity was pretty good across all the three zones, emphasizing the impact of noise isolation technology incorporated into them. Overall, the device loudspeaker clarity was just average, delivering choppy and wavering voice clarity across zones two and three. The audio clarity distorted even further, as we increased the call volume to the maximum. The Bluetooth transfer speed test results were anything but mediocre, yielding a score of 330kbps as against 736kbps recorded by Fly MV135. Also, the MC100 failed to impress in the captured video quality test, with out of focus and distorted images affected even further by pixelated artefacts. Although, it did a fair job in the still photo test, producing crisp and lively images. In the music test, the loudspeaker boosted with 3D amplifier delivered loud and clear vocals, topping it up with soothing instrumental music. The impressive sound reproduction was characterized by well balanced bass and treble effects. However, the audio quality of the bundled earphones lacked the same degree of comfort and felt very average. Also, one of the earphone covers came off while trying to fit the earphone head into the ears. That signified an ordinary build and design quality of the covers. The quality of the display was good with satisfactory viewing angles. However, the display legibility under bright sunshine was just ordinary, with images and icons getting blurred. It was hard to identify what icons were on the screen, let alone read out a piece of text, which was near to impossible! In spite of the obvious shortcomings with visible grainy particles against dark colours like red and black, the crisp and consistent video frame rates remained the saving grace during the video playback test.

The Movil MC100 is a feature-rich touch-screen smart-phone targetted atthe multimedia segment, with the 3D-YAMAHA power amplifier being its top selling point. The neat and intuitive widget interface adds value for money and so does the increasingly popular mobile tracker application. At the price point of Rs. 4,499, the MC100 gives you true value for money sans the mediocre video camera. So, if you are not a die-hard fan of cameraphones and want something that gives you a taste of everything, then this one is for you.