The Moto E (2nd Gen) is definitely not a bad smartphone, but it makes no sense in the current market. The newer hardware on the Redmi 2 and Lenovo A6000 are both more powerful and already have 4G compatibility. The Moto E just doesn't provide the value that they do.

When Motorola announced the original Moto E, it was a treat for all of us, and that includes reviewers all over the world. The company showcased why it is one of the pioneers of mobile technology and turned the mobile market head over heels. Motorola showed that you don’t need to shell out month’s salary to get a good device and gave us what was truly a phone for the people.

Fast forward one year ahead, the new Moto E is now here. And it reminds me of that famous comic book adage, “With great power comes great responsibility.” I’ve read a bunch of reviews from my counterparts overseas, who have all appreciated this device. But for us, the Moto E is a much more important smartphone than it is for them. Why? Most of the smartphone buyers in India, buy in the budget segment.

The Moto E (2nd Gen) is a good device, no doubt, but the contest in the budget segment in India is very different from other countries. In a head to head battle against its competitors, like the Xiaomi Redmi 2 and Lenovo A6000, the new Moto E takes a beating. Here’s how. 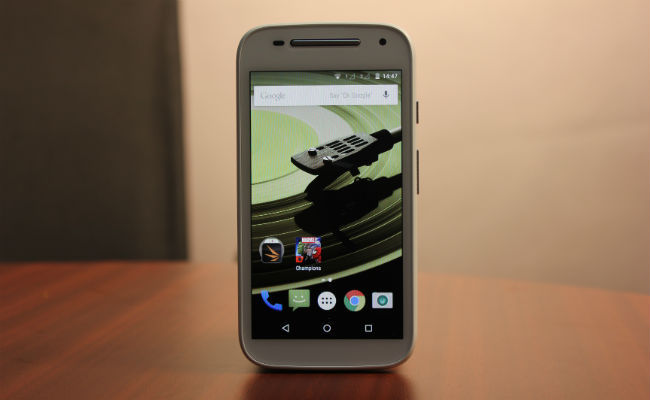 On the design front, the new Moto E is essentially an extension of the older one. But there’s a few subtle changes that make this one so much better. The rubberised grip around the side, which hides the SIM and micro-SD slots is very important. It adds grip and will absorb shocks as well. In addition, it gives the phone a unique look, unlike any other. 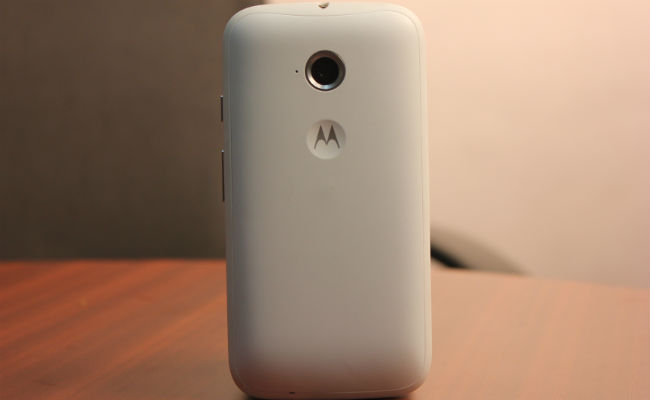 Motorola’s design philosophy was always more ergonomic than others, but I’ll go as far as to call the new Moto E a beautiful budget device. Why? Because it’s different. That rubber grip, which is available in various colours, makes it stand out against all the bar designs that we get to see these days. Add the curved back and small size and you’ve got a device that’s both easy to use and good looking for its price. 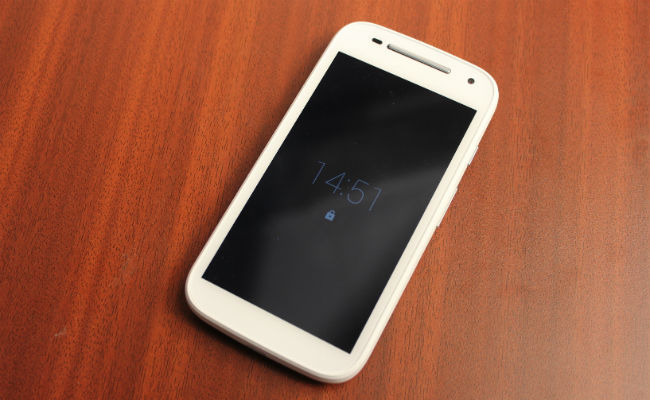 The company adds a solid build on top of this, to leave almost nothing to complain about in the build and design segment. That is, until you see the Xiaomi Redmi 2. There’s a reason why the Chinese firm launched its competitor a few days after Motorola. The Redmi 2, though carrying the boring old bar design, is a better looking phone, which is just as ergonomic. I’m almost finished with that review as well, so watch out for more. 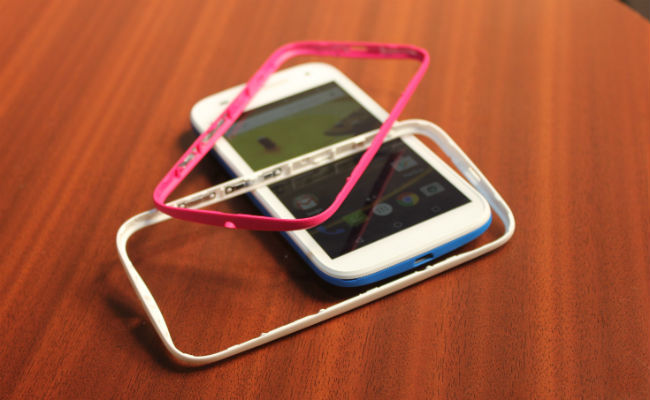 A 4.5 inch display is just about acceptable these days, but a 540x960p resolution isn’t. At the same price, you have the Redmi 2 and Lenovo A6000, which both offer 720p resolutions. The Moto E’s display has a better touch experience than the A6000, but it isn’t in the same league as the Xiaomi Redmi 2 display in terms of colors reproduction and sharpness. Yes, we now demand and expect a lot more from a Rs. 7,000 device, a lot has changed since the last Moto E launch. The Moto E’s display does redeem itself, delivering better viewing angles and a lesser reflective display than the Xiaomi Redmi 2. But, overall we’d place the Redmi 2 display above the Moto E, the Redmi scores higher in crucial aspects of the display, especially for a 7K smartphone segment.

The Moto E runs on Android Lollipop out of the box and is the only one in this range to do so at the moment. The UI is smooth, with little to no lags and Motorola has brought some useful features to the device. The Moto Display, which shows your notifications without turning the screen on is one of these features, while the Quick Capture feature is also pretty useful for taking quick shots through the camera. 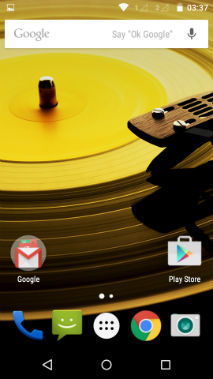 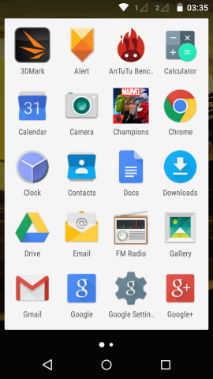 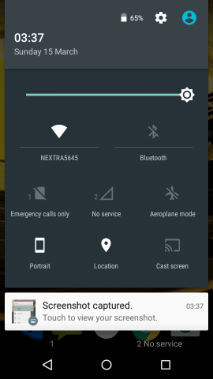 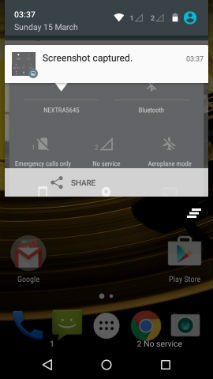 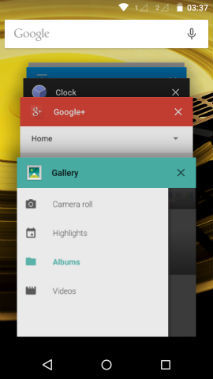 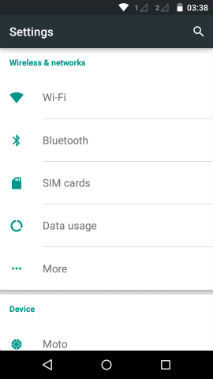 Me and a bunch of my colleagues from other publications pestered Motorola a lot about choosing the Snapdragon 200 over the newer 410 SoC. Considering that the company went with the 64-bit Lollipop OS for the Moto E, the Snapdragon 410 seems like the logical choice. Nevertheless, Motorola was adamant that the performance wouldn’t suffer because of this.

Well, that’s not true. Using it side by side with the Redmi 2 and Lenovo A6000, the Moto E is inferior. Yes, the Moto E offers a more uniform performance than the A6000, but pales in comparison to the Mi device. On regular usage, app launch times and the overall UI experience on the Moto E are pretty satisfactory, but start a game like Marvel: Contest of Champions and the lags creep in. Not only does the game load faster on the Redmi 2, the Moto E makes the Mi device seem like a mid-ranged smartphone.

The benchmarks don’t tell the entire story here. The Redmi 2 and Lenovo A6000 are both much more powerful than Moto E.

Motorola’s compromise on the camera quality used to make sense till last year, because the company got things right in every other department. This time around though, the 5MP rear camera on the Moto E seems worse because of all the other shortcomings. You may be able to take some passable shots with this camera under optimal light conditions, but anything less and you’re looking at really bad images. It is essentially the same camera as the old Moto E, but with auto focus.

While we’re talking about the camera, Motorola ‘heard’ its users this time around and added a VGA camera to the front. Yes, you read that right, a VGA camera, all 0.3 mega pixels of it. For some reason the company thought that was the way to go. Frankly, I would trade the front camera for a faster processor in a heartbeat.

The one thing that all of us here at the Digit test labs were looking forward to was the larger 2390 mAh battery. Better battery life could make up for a lot of the device’s faults. Sadly though, the Moto E doesn't show any major improvements here. The results on our battery tests were just about satisfactory. With some frugality, I could get the device to last me through the day, just like I could with the older Moto E.

The battery life is at par with the Redmi 2 and Lenovo A6000.

As that adage goes, “With great power comes great responsibility.” In my humble opinion, Motorola had the opportunity to deliver the knockout punch to its competition, but failed. The 3G version of the Moto E (2nd Gen) is not one that you should buy. At least not as long as you can buy the Xiaomi Redmi 2 or the Lenovo A6000.

Going with a Snapdragon 410 SoC would have still made this device an incremental update, but combined with Motorola’s brand value and increased customer service efforts, it would have made sense. As things stand though, the 3G version of the Moto E isn’t as value for money as it used to be. It’s not the best device you can buy in the under-7k segment, ahead only of Microsoft’s Lumia 532 and 435. What's even more unfortunate is that the needless 3G/4G skews for the Moto E will drive up the price of the Snapdragon 410-powered 4G variant. That may make it a lesser value device as compared to the Redmi 2, which is already 4G capable.