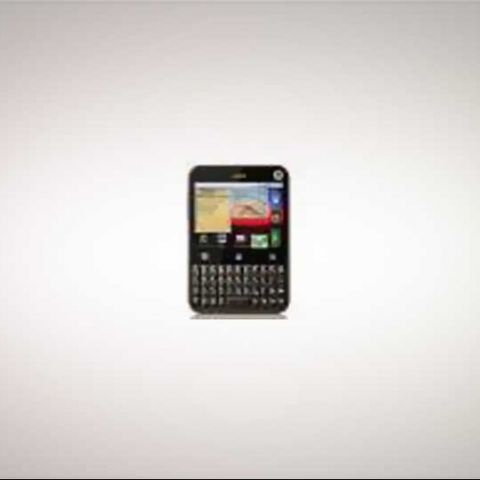 The Charm is one of the few full QWERTY Andriod phones out there, and as a whole, offers good value for money with its range of features and solid performance, from the BackTrack touchpad to the call clarity.

Build Quality and Ergonomics
The Motorola Charm is one of the few candy bar QWERTY Android phones out there, and sports a 2.8-inch Gorilla Glass screen with a 320x240 pixel resolution. That resolution is not something to be too proud of, though most phones of this type (QWERTY candy bar, like the E72) have it...it's just not something you expect from an Android phone - and the ordinarily super smooth looking operating system gains some unwanted and unsightly text pixellation in this case.

The phone's four-line QWERTY keyboard is great, with well-bevelled keys that provide good tactile feedback, and are large enough not to trouble the thickest fingers. An extra-wide layout that has alternate keys marked with lime green, it features delete and return keys to one side, above four arrow keys - which are useful extras. Also useful additions are the dedicated mail, camera, and search keys between the spacebar and the ALT key.

The rest of the phone is well-built as well, with Motorola's unique BackTrack touchpad on the back of the phone, beside the 3.15MP camera lens. The back panel feature the MotoBlur logo at the centre (not present in the above pictures), with the phone's loudspeaker a slit at the bottom, showing off a lime green grille below. The volume rocker is on the left side on the phone, above an exposed microUSB port, with the lock/power key on the top. The standard Android keys, apart from search, are at the top of the QWERTY keyboard, on the screen's bezel - options, home, and back.

Interface
The phone runs on Android 2.1, which comes without native Flash support and application storage on memory card, features that Android 2.2 (Froyo) supplies. Eclair apparently also has a slower web browser and interface than Froyo. However, with our time with the phone, we didn't find it slow at any point, excepting of course, when too many apps are open at once, but that's something you can't expect the 600MHz processor and 512MB of RAM to be able to manage, and these specs are the best you can get at the price range. The 512MB of storage is a big plus until (and if) the phone gets an upgrade to Froyo, giving users quite a bit of space to install plenty of applications before they have to start being miserly with them.

There are up to 7 configurable homescreens, with the choice of one wallpaper for all. As for the MotoBlur UI, we have to say it is quite minimalistic, not slowing down the phone at all, and with few customizations to speak off. As for typing, users are not limited to the hardware QWERTY keyboard, and can choose to use an onscreen QWERTY keyboard at anypoint. Why they would choose to do that, especially on a 2.8-inch screen, is a mystery.

The BackTrack touchpad at the back of the phone on the other hand is a wonder, and is rarely touched inadvertently. It's most useful for web browsing and watching image slideshows, allowing you to scroll without blocking the screen with your fingers. One can also use the BackTrack pad as a pointing/selection tool when one taps it, bringing up a cursor that can select items on webpages, or even on the phone's own interface, from using the onscreen keyboard to typing out a phone number with the dialler. Coupled it with arrow keys and touchscreen, and Motorola has provided a wealth of control interfaces.

The screen's touch responsiveness and sensitivity is quite good, though at times, the lockscreen did act frozen.

[RELATED_ARTICLE]Performance
Call
The phone's signal reception and call clarity was very good, with good performance across various signal zones. The phone's loudspeaker quality was good as well, with barely any distortion even at maximum volume, though it could have been slightly louder. Voice pickup was also good across all use-types.

Audio/Video
Audio playback was good, with the bundled earphones providing a solid, balanced output. The loudspeaker playback was not loud enough though, and could have done with some more bass output. Video playback performance was also solid, thought the 256K colour limitation was visible with slight colour banding.

Camera
The phone's 3.15MP camera did as good a job as you'd expect of it, and was surprisingly clear of any noise in good to medium light conditions. However, in lowlight, it didn't offer any surprises, and was quite grainy. The photos had relatively decent colour accuracy, though they were a bit towards the washed out side. Overall, image sharpness was not its strongest feature, but nothing to complain too much about.

Battery Life
Running Android 2.1, you can be sure the phone is not as power efficient as it can be with Froyo or Gingerbread. As it is, if you are using the phone simply for voice calls and messaging, the phone would last a while, a little over a day. If you end up browsing (Wi-Fi), using the camera quite a bit, or consuming media, expect the battery life to fall to less than a day.

Verdict:
As we mentioned, the phone is one of the few full QWERTY Andriod phones out there, and as a whole, offers good value for money with its range of features and solid performance, from the BackTrack touchpad to the call clarity. However, unless you are looking specifically for a QWERTY Android device, there are quite a few other contenders out there for a mid-range smartphone, ones with excellent onscreen keyboards and the latest operating systems out-of-the-box.