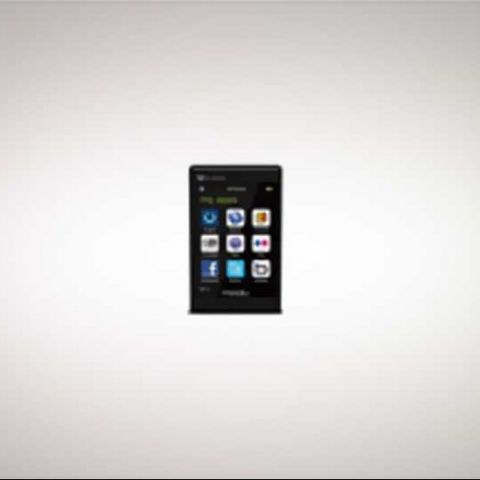 Its tiny form factor is sure to turn heads, and at Rs. 12,500, the modu T is quite a good buy for someone looking for a small capable device that weighs barely anything. However, the lack of Wi-Fi is an obvious disadvantage when compared to other phones in the segment, as is the lack of availability of apps the Ovi Store or Android Market can provide. The phone, it must be said though, does not exactly sit comfortably being measured against other phones, being a one-of-a-kind device in the Indian market as of now with its size. We would however recommend you wait till modu brings an Android and Wi-Fi capable device into the Indian market before going in for the modu T, unless of course, you just cannot do without a tiny sport companion and fashion statement in the meanwhile.

Build Quality and Egronomics
Called the world’s lightest phone and apparently so recognized by the Guinness Book of World Records, the modu T is designed by modu, an Israeli mobile phone company that has partnered with Micromax to bring it India. The modu T follows the company’s design philosophy, with a no frills minimally styled phone handset that could compete with some of the world’s smallest phones, and comes with augmentations that can be “added-on”, known as modu jackets.

In the case of the modu T handset, a ‘camerafy’ jacket is provided in the box, an add-on snap-on that gives the tiny phone a 5MP camera to shoot with, along with a dedicated camera button. The ‘textify’ jacket, which gives the handset a QWERTY keyboard that can be snapped on, is also available, at an additional cost. 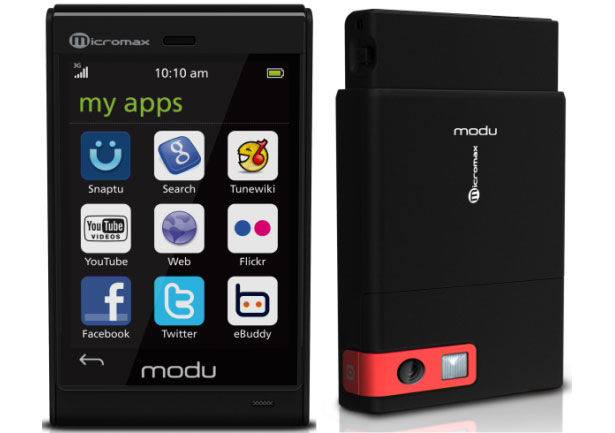 The modu T unaugmented (left), suited up with the 'camerafy' jacket (right)

The phone is extremely well built, with a glass screen and matte black metal body truly pleasing the eye. Everything but a camera fits in a minute candy bar form factor that can rest easily in the palm of your hand. The phone’s 2.2-inch resistive touchscreen has a small black bezel surrounding it, and features a touch-sensitive ‘return’ button on the bottom left of the display. The whole display looks to be raised from the phone’s main body, with the device’s microphone pickup lying on a lower level below it. Above the screen lies the device’s earpiece, with the Micromax branding unostentatiously making its presence felt to its right. Just below the screen, alongside the return button, is the modu branding.

Apart from the camerafy jacket, the phone comes with a ‘sportify’ sports carry case in the box, as well as in-ear headphones with a control interface (pause/play, volume, next/previous).

Ergonomically, the phone is exquisite, with modu T handset not being so small that actually holding it up to your face during call is difficult, but instead, with its feather-light weight and miniscule dimensions making one-handed operation a super-easy option, and manage to give an impression of solidity despite them.

Interface
Though the world expected modu to make the modu T an Android handset, the company chose to use a version of the Brew OS instead (similar to that on the HTC Smart). Not supporting offline operability apart from emergency calls, the phone requires a SIM to be accessed.

The phone’s homescreen interface is interesting, with swipes take you places from the homescreen. A swipe to the left opens web apps, a swipe to the right opens the dialer, a swipe down opens notifications and status information, while a swipe up opens the list menu.

Apart from the homescreen, you’ll find a black background everywhere, with crisp white and coloured text giving the interface a clean look.

Messaging is a novel experience, with a responsive resistive touchscreen providing just an alphanumeric keyboard in portrait mode, with the XT9 predictive text input option. There’s no QWERTY in landscape and no UI auto-rotate, but the responsive screen and large onscreen keys make for an easy typing experience.

The modu T’s contact menu or phonebook is easy to use and intuitive, as are the other native apps on board, such as the video and audio player, calculator, FM radio, etc. 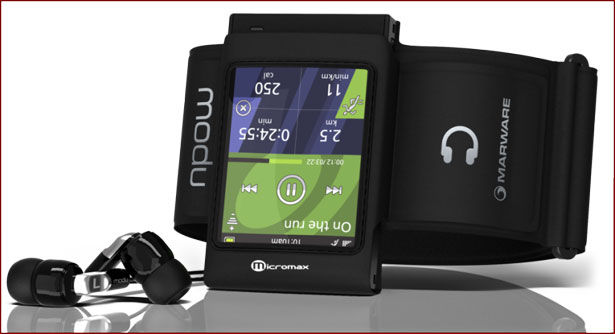 The modu T in a 'sportify' sport band

The Sportify mode will give you music on the go, along with stopwatch, pedometer, and calorimeter, to give a rough idea of just how strenuous your workout actually is, while giving you control of your music on the go. You have two options in sport mode, Go, and Music & Go. One gets you started right off, with the last song playing on the music player commencing and the various meters set to zero, while Music & Go lets you choose your playlist or tracks before you open the Go mode.

Various controls, settings and sub-menus, like screen brightness, volume, and write message options are easy to access (either by the options/settings tab, or the central options button), and appear in a pleasing circular overlay that can be scrolled/adjusted.

The interface, powered by a 184MHz processor, is surprisingly snappy, with the touchscreen providing accurate response as well as good haptic feedback. The phone also comes bundled with plenty of web apps, such as Snaptu, TuneWiki, YouTube, Flickr, Facebook, Twitter, and eBuddy.

Read on to know about how the phone fared in our tests.

Performance
Call
Call performance was exceptional throughout, with good signal reception and call clarity in handset mode in areas of varying signal strength, and no dropped calls experienced. The loudspeaker is also surprisingly loud in call, causes some resonance with the case at maximum volume, but nothing too distracting. The handsfree is of good quality, but the microphone sensitivity needs some work, appearing to the listener as reduced volume.

Battery
Battery life was not very good, with the phone lasting less than 24 hours with average use, a figure that drops considerably when using the Camerafy jacket’s and/or flash often.

Camera
[RELATED_ARTICLE]While the phone has a 5MP camera that can be added on with the Camerafy jacket, for all purposes it can be considered a 2MP camera, with no zoom feature in the 5MP mode. However, the 5MP camera provides surprisingly good contrast if a little too harsh (washed out) colour accuracy, and decent noise levels in good light. In low light, noise levels become apparent. Video recording quality is not bad, with minimal artifacts and relatively smooth recording at the admittedly low quality level.

Audio
Audio playback was good, with the loudspeaker doing a great job to belie the size of the phone, with roar that’s much mightier than you’d expect. The in-ear headphones appear to be built well, and provide mediocre output, with a lot lacking in the bass department. Unfortunately, MP3 happens to be the only format it supports.

Video
Video playback is good, however, some colour banding is visible with the 65K colour screen.

Verdict:
The phone’s tiny form factor is sure to turn heads, and at Rs. 12,500 is quite a good buy for someone looking for a small capable device that weighs barely anything. However, the lack of Wi-Fi is an obvious disadvantage when compared to other phones in the segment, as is the lack of availability of apps the Ovi Store or Android Market can offer instead. The phone, it must be said though, doesn’t exactly sit comfortably being measured against other phones, being a one-of-a-kind device in the Indian market as of now with its size. We would however recommend you wait till modu brings an Android and Wi-Fi capable device into the Indian market before going in for the modu T, unless of course, you just can’t do without a tiny sport companion and fashion statement in the meanwhile.

Read on to see the phone's test scores...